When developing high concurrency systems, there are three sharp tools to protect the system: caching, degradation and current limiting.

It is the simplest and easiest algorithm among current limiting algorithms. For example, if we require an interface, the number of requests in one minute cannot exceed 10. We can set a counter at the beginning. For each request, the counter + 1; If the value of the counter is greater than 10 and the time interval with the first request is within 1 minute, it indicates that there are too many requests. If the time interval between the request and the first request is greater than 1 minute and the value of the counter is still within the current limit, reset the counter.

If a large amount of traffic accesses 10 requests in 59s and 10 requests in 61s during critical aggregation, 20 requests occur in 2s and 10 counters are not satisfied (not limited by traditional methods), so we can use sliding window method to solve the critical problem of counters

The principle of sliding window is to judge whether the total access volume in the first N unit times exceeds the set threshold every time there is access, and add 1 to the number of requests on the current time slice. 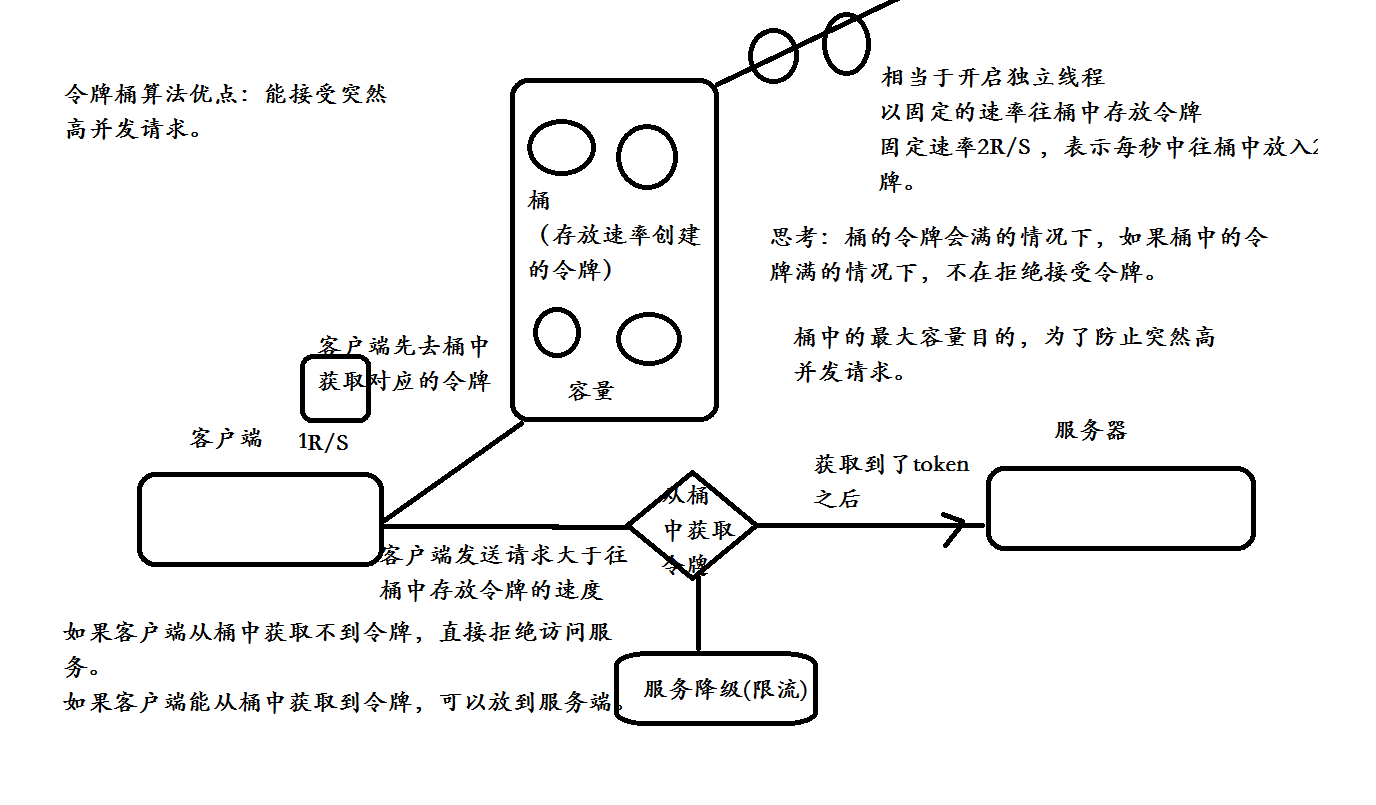 RateLimiter is an implementation class based on token bucket algorithm provided by guava. It can easily complete the current limiting stunt and adjust the rate of generating tokens according to the actual situation of the system.

Generally, it can be applied to rush purchase current limiting to prevent the system from crashing; Limit the access volume of an interface and service unit within a certain time. For example, some third-party services will limit the user access volume; Limit the network speed, how many bytes are allowed to upload and download per unit time, etc. 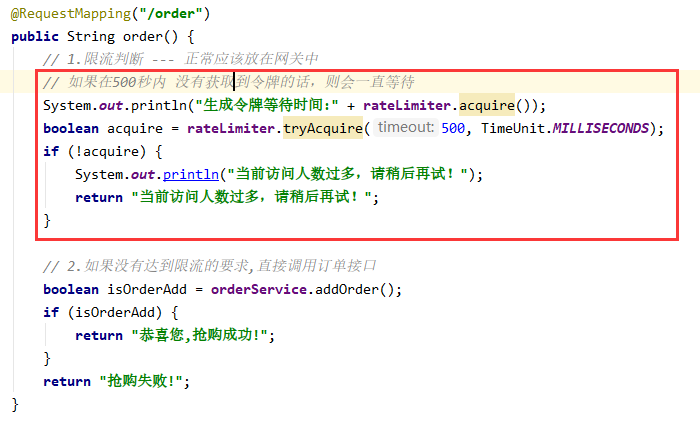 3.2.2 why should service flow restriction be implemented

The ultimate purpose of current limiting is to protect services.

When The Leaky Bucket Algorithm as a Meter can be used for Traffic Shaping and traffic policy, the leaky bucket algorithm is described as follows:

The implementation of the two algorithms can be the same, but the direction is opposite. For the same parameters, the current limiting effect is the same.

In addition, sometimes we also use counters to limit the flow, which is mainly used to limit the total concurrency, such as the concurrency of database connection pool, thread pool and second kill; As long as the threshold value set for the total global requests or the total requests in a certain period of time is limited, it is a simple and rough total quantity current limit, not an average rate current limit.

A fixed leaky bucket that emits water droplets at a constant rate. 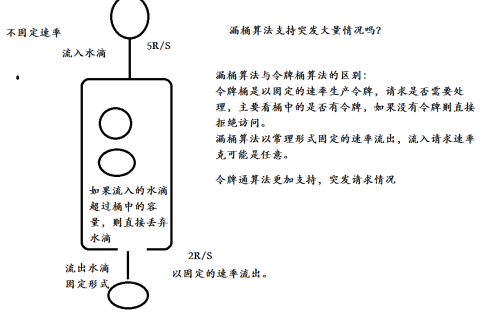 In the "token bucket algorithm", as long as there are tokens in the token bucket, it is allowed to transmit data in bursts until the user configured threshold is reached. Therefore, it is suitable for traffic with burst characteristics.

Add comments on the methods that require current limiting

Gateway: it generally intercepts all interfaces

For an application system, there must be a limit to the number of concurrent / requests, that is, there is always a TPS/QPS threshold. If the threshold is exceeded, the system will not respond to user requests or respond very slowly. Therefore, we'd better carry out overload protection to prevent a large number of requests from flooding into the system.

If you have used Tomcat, one of its Connector configurations has the following parameters:

Please refer to the official document for detailed configuration. In addition, MySQL (such as max_connections) and Redis (such as TCP backlog) have similar configurations to limit the number of connections.

5.3 limit the total concurrent / requests of an interface

If the interface may have unexpected access, but it is worried that too much access will cause collapse, such as rush buying business; At this time, it is necessary to limit the total concurrent / requests of this interface; Because the granularity is fine, you can set corresponding thresholds for each interface. AtomicLong in Java can be used for current limiting:

It is suitable for limiting the flow of services without damage to the business or services requiring overload protection. For example, if the business is snapped up, either let the user queue up or tell the user that it is out of stock. It is acceptable for the user. Some open platforms also limit the amount of trial requests for users to call an interface, which can also be implemented in this way. This method is also simple and rough current limiting without smoothing, which needs to be selected and used according to the actual situation;

5.4 number of time window requests for a current limiting interface

That is, the number of requests in a time window. If you want to limit the number of requests / calls per second / minute / day of an interface / service. For example, some basic services will be called by many other systems. For example, the commodity detail page service will call the basic commodity service, but we are afraid that the basic service will be hung up because of the large amount of updates. At this time, we need to limit the number of calls per second / minute; One implementation method is as follows:

5.5 number of requests for a smooth current limiting interface

The previous current limiting methods can not deal with sudden requests well, that is, instantaneous requests may be allowed, resulting in some problems; Therefore, in some scenarios, the burst request needs to be shaped into the average rate request processing (for example, 5r/s, a request is processed every 200 milliseconds to smooth the rate). At this time, there are two algorithms to meet our scenario: token bucket and leaky bucket algorithm. Guava framework provides the implementation of token bucket algorithm, which can be used directly.