There was Cheng Yaojin's "three board axes" in ancient times, which shocked Sui and Tang Dynasties.

In many scenarios of distributed system, in order to ensure the final consistency of data, we need many technical solutions to support, such as distributed transactions, distributed locks and so on.

Sometimes, we need to ensure that a method can only be executed by the same thread at the same time. In the stand-alone environment, Java actually provides a lot of API related to concurrent processing, but these APIs are powerless in the distributed scenario. That is to say, Java Api alone cannot provide the ability of distributed lock.

At present, there are many schemes for the implementation of distributed locks:

Before analyzing these solutions, let's think about what kind of distributed locks we need. (take method lock as an example, and resource lock is the same.)

It can ensure that the same method can only be executed by one thread on one machine at the same time in the application cluster of distributed deployment.

I. implementation of distributed lock based on Database

1.1 based on database table

The easiest way to implement a distributed lock is to create a lock table directly and then operate the data in the table.

When we want to lock a method, execute the following SQL:

Because we have made a uniqueness constraint on method [u name], if there are multiple requests submitted to the database at the same time, the database will ensure that only one operation can succeed, so we can think that the thread that succeeds in the operation has obtained the lock of the method and can execute the method body content.

After the method is executed, if you want to release the lock, you need to execute the following Sql:

The above simple implementation has the following problems:

Of course, there are other ways to solve the above problems.

To solve the problem that the database is a single point, two databases should be established, and the data should be synchronized in two directions. Once hung up, quickly switch to the standby database.

For no expiration time? Just do a regular task, and clean up the overtime data in the database at regular intervals.

For non blocking? Make a while loop until the insert succeeds and then returns success.

1.2 exclusive lock based on Database

In addition to adding or deleting records in the operation data table, the distributed lock can also be realized by using the lock in the data.

We also use the database table we just created. Distributed lock can be realized by exclusive lock of database. The InnoDB engine based on MySql can use the following methods to implement the lock operation:

We can think that the thread that obtains the exclusive lock can obtain the distributed lock. After obtaining the lock, it can execute the business logic of the method. After executing the method, it can be unlocked by the following methods:

Release the lock through the connection.commit() operation.

This method can effectively solve the above mentioned problems of unable to release locks and blocking locks.

The advantages of database implementation of distributed lock: it is easy to understand with the help of database directly.

Disadvantages of implementing distributed lock in database: there will be various problems, and the whole scheme will become more and more complex in the process of solving the problem.

Operating the database requires some overhead, and performance issues need to be considered.

2. Implementation of distributed lock based on cache

At present, there are many mature cache products, including Redis, memcached, etc.

There are several key points to pay attention to during implementation:

Several redis commands to be used:

get(key): get the value corresponding to the key. If it does not exist, return nil.

getset(key, value): first get the value value corresponding to the key, if not, return nil, and then update the old value to the new value.

Take a look at the flowchart: 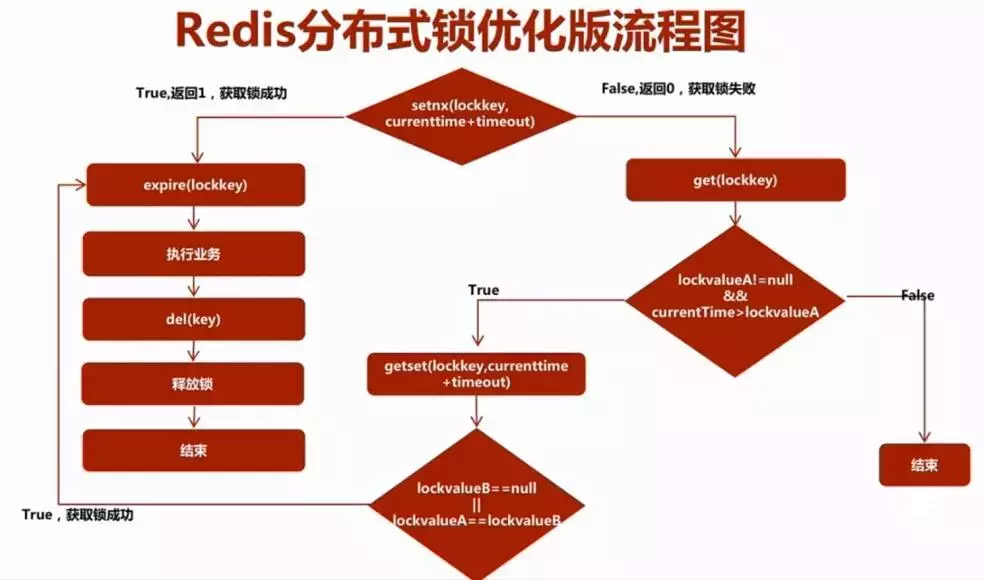 In this process, deadlock will not be caused.

I use Jedis as the api of Redis client. Let's see the specific implementation code.

(2) encapsulate the api of Jedis, encapsulate some operations needed to implement the distributed lock.

3. Implementation of distributed lock based on Zookeeper

Based on the distributed locks that can be implemented by the temporary ordered nodes of zookeeper. The general idea is: when each client locks a method, it generates a unique

Instantaneous ordered node. The way to determine whether to acquire locks is very simple. Only the smallest one of the ordered nodes needs to be determined. When releasing the lock, just delete the instantaneous node. At the same time, it can avoid the deadlock problem caused by service downtime.

Let's see if Zookeeper can solve the problems mentioned above.

Non reentrant?
Zookeeper can also be used to effectively solve the problem of non reentrant. When the client creates a node, it directly writes the host information and thread information of the current client to the node. The next time it wants to acquire a lock, it can be compared with the data of the current smallest node. If it is the same as its own information, it obtains the lock directly. If it is different, it creates a temporary sequential node to participate in the queue.

A single question?
Zookeeper can effectively solve single point problems. ZK is deployed in a cluster. As long as more than half of the machines in the cluster survive, it can provide external services.
You can directly use the zookeeper third-party library, the cursor client, which encapsulates a reentrant lock service.

The distributed lock implemented with ZK seems to meet all our expectations for a distributed lock at the beginning of this article. However, in fact, there is a disadvantage of the distributed lock implemented by Zookeeper, that is, there may be no cache service in performance.
So tall. Because every time in the process of creating and releasing locks, we need to create and destroy instantaneous nodes dynamically to realize the lock function. The creation and deletion of nodes in ZK can only be performed through the Leader server, and then the data cannot be shared with all the Follower machines.

The advantages of using Zookeeper to implement distributed lock are as follows: effectively solving single point problem, non reentry problem, non blocking problem and lock can not be released. It is easy to realize.

From the perspective of difficulty (from low to high): Database > cache > zookeeper

From the perspective of implementation complexity (from low to high): zookeeper > = cache > Database

From a performance perspective (from high to low): cache > zookeeper > = database

From a reliability Perspective (from high to low): zookeeper > cache > Database

Therefore, I personally prefer to use cache to implement. In the following articles, we will encapsulate our own distributed lock implementation based on Redis.