1. Biased lock: the biased lock mode is used to bias the lock to a given lock thread. When this mode is set to the lower three bits, the lock may be biased toward a particular thread or "anonymous", indicating that it may be biased. When a lock is biased toward a given thread, locking and unlocking can be performed by that thread without using atomic operations. When the lock deviation is revoked, it will return to the normal state as described below. Note: Hotspot does not enable biased locking objects for the first few seconds (currently four seconds) of JVM startup. This is because some benchmarks and NetBeans have a lot of thread contention during startup, and the cancellation cost is very high. You can set the shutdown delay startup - XX:BiasedLockingStartupDelay=0 in ieda, as shown in the figure below. If you call the calculation hashcode() method lock, you will lose the thread bias feature.

3. Heavyweight lock: in the process of multi-threaded competitive lock, lock inflation is upgraded to heavyweight lock. Each time lock is acquired, os lock function is called, including lock release, which is slower than lightweight lock. If you call the wait() method, the lock immediately becomes a heavyweight lock.

1, First we need to know what is a java object header?

Then go to the hotpot(jvm) directory of the jdk source code to know the figure. There is a comment in the source code of markOop. openJdk Source code (you may need VPN if you can't open it.). 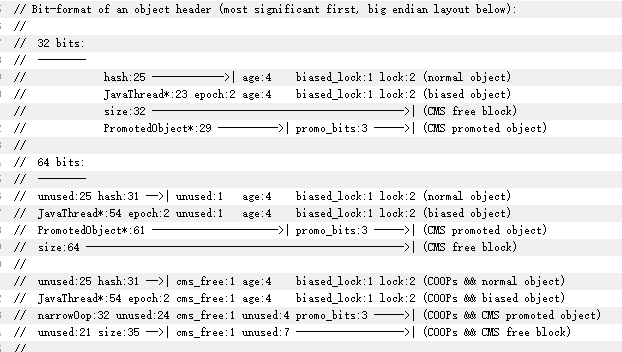 Low 3-digit mark of each lock

1. It means that the java object header will have different forms in different states of the object. There are mainly three states: unlocked state, locked state and gc Tagged state. Then I can understand that the lock taking in ava is actually to lock the object, that is, to change the state of the object header. If the lock is successful, the synchronization code block will be entered. However, there are many types of locks in java. From the above figure, we can see that there are three lock states: biased lock, lightweight lock and weight lock. The efficiency of these three kinds of locks is totally different. The analysis of efficiency will be analyzed in the following section. We can only make reasonable use of locks with reasonable design code. So what are the principles of these three locks? So we need to study this object first

Don't talk too much nonsense

Performance comparison of each blog is not demonstrated one by one: biased lock > lightweight lock > heavyweight lock