The chedulingQueue is a pair of pod storage in the kubernetes scheduler responsible for scheduling. Scheduler uses SchedulingQueue to obtain pods waiting to be scheduled in the current system. This paper mainly discusses the design and implementation of SchedulingQueue, and explores its internal implementation and underlying source code. This series of codes is based on the analysis of kubernets 1.1.6.

In fact, in most scheduling scenarios, priority queues are mostly used to achieve priority to meet higher priority tasks or needs, thereby reducing subsequent high priority preemption to lower priority, as is the case in scheduler.

When the pod's resources are not satisfied in the current cluster, they are joined to an unschedulable queue and wait for a later attempt

The backoff mechanism is a common mechanism in concurrent programming, that is, if the repeated execution of tasks still fails, the waiting schedule time will increase step by step, reducing the retry efficiency, thus avoiding repeated failures and wasting scheduling resources

Pods against scheduling failures are stored in the backoff queue first, waiting for subsequent retries

When there are no pods waiting to be dispatched in the queue, the scheduler will be blocked from waking up the dispatcher to get the pod to dispatch

nominatedPods stores the node whose pod is proposed to run and is primarily used to preempt dispatch processes. This section does not analyze

The default schedulingQueue implementation in kubernetes is PriorityQueue, which is the data structure that this chapter analyzes

PriorityQueue as the implementation of SchedulingQueue, its core data structure mainly contains three queues: activeQ, podBackoffQ, unscheduleQ internal through cond to achieve blocking and notification of Pop operations. Next, the core scheduling process is analyzed, and then the specific implementation in util.Heap is analyzed.

As mentioned above, the podBackOffQ queue does not store specific information about the backOff of the pod, such as the counter of the backoff, the time of the last update, etc. The podBackOff queue acts like a scoreboard to record this information for use by podBackOffQ

When a pod in unschedulableQ is attempted to be transferred to activeQ because of changes in cluster resources, moveRequestCycle is the schedulingCycle that stores resource changes

Concurrently get pod from active queue

SchedulingQueue provides a Pop interface to get pod s waiting to be dispatched from the current cluster, and its internal implementation is mainly achieved by cond and activeQ above

When there is no dispatchable pod in the current queue, it is blocked by cond.Wait, and then notified by cond.Broadcast when pod is added in forgotten activeQ

When a pod joins the active queue, in addition to joining the priority queue of activeQ, it also needs to remove the current pod from podBackoffQ and unschedulableQ, and finally block the latest pod acquisition by the scheudler of the Pop operation with broadcast notifications

The main factors causing the schedulingCyclye change of the scheduling cycle are as follows:
1. When the cluster resources change, such as adding new resources such as pv, node, etc., the pod in unschedulableQ can be put into activeQ or podBackoffQ to schedule in time because the resources do not meet the needs.
2. The pod is successfully dispatched: previously it was put into unschedulableQ due to lack of affinity, so you can try it instead of waiting for a timeout before adding it

When a pod currently fails, there are two choices: one is to join podBackoffQ, the other is to join unschedulableQ. How do you choose which queue to enter for a failed pod?

When a dispatch pod fails, the scheduler also calls sched.Error, which is the failure handling logic injected above, to rejoin the pod node of the dispatch failure unassigned node to the queue clock
kubernetes/pkg/scheduler/scheduler.go

PodBackoffMap is used to store the last failed update time and number of implementations of a pod, from which the backoffTime of a pod is calculated

Set initialDuration and maxDuration back at initialization time. In the current version, 1s and 10s respectively, that is, the pod in backoffQ will rejoin activeQ for up to 10s (waiting for a timer task to assist) 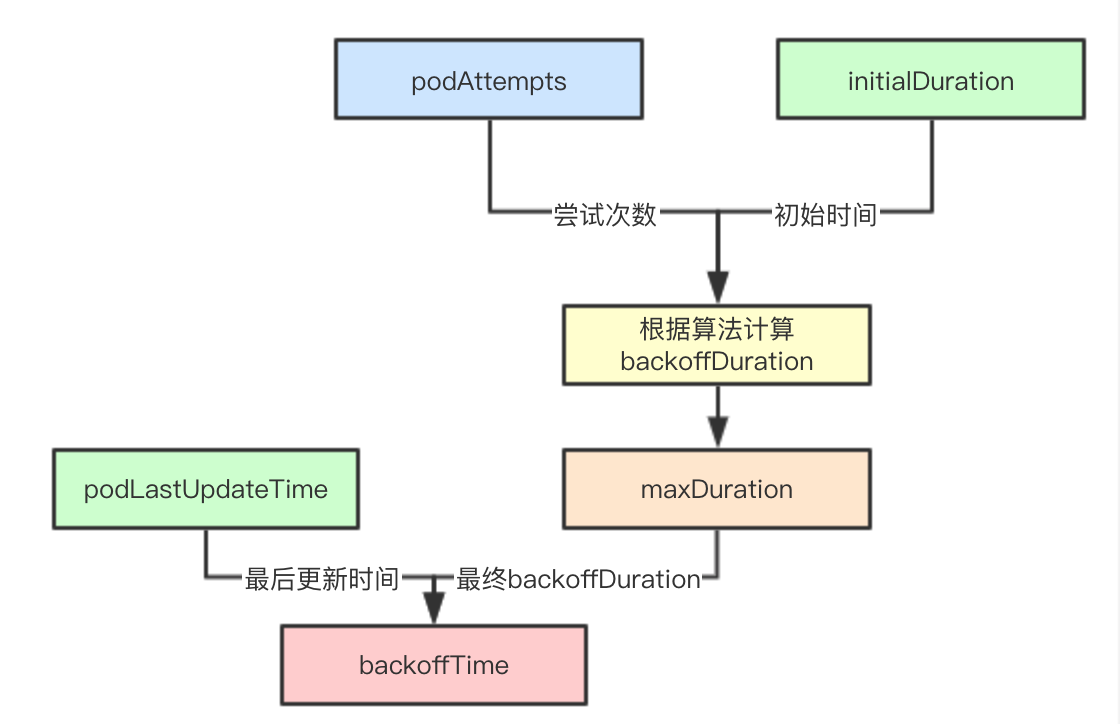 In fact, the final calculation is simply the N-th power of 2 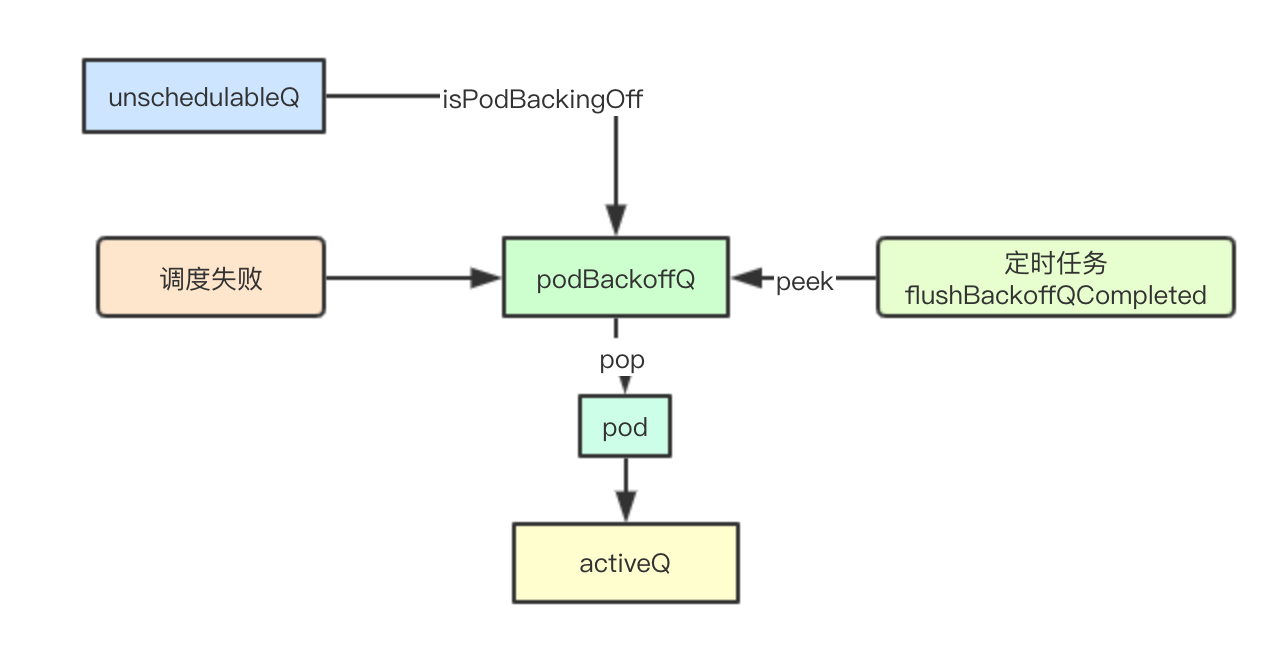 When cluster resources change as described earlier, an attempt to transfer pods from unschedulabelQ is triggered, and if it is found that the current pod has not reached backoffTime, it is added to podBackoffQ

When PriorityQueue is created, one of the two timer tasks is the transfer after the pod in backoffQ expires, which is attempted every second

Since it's a heap result, all you need to do is take the top element of the heap, determine if it's due, and pop it in to activeQ 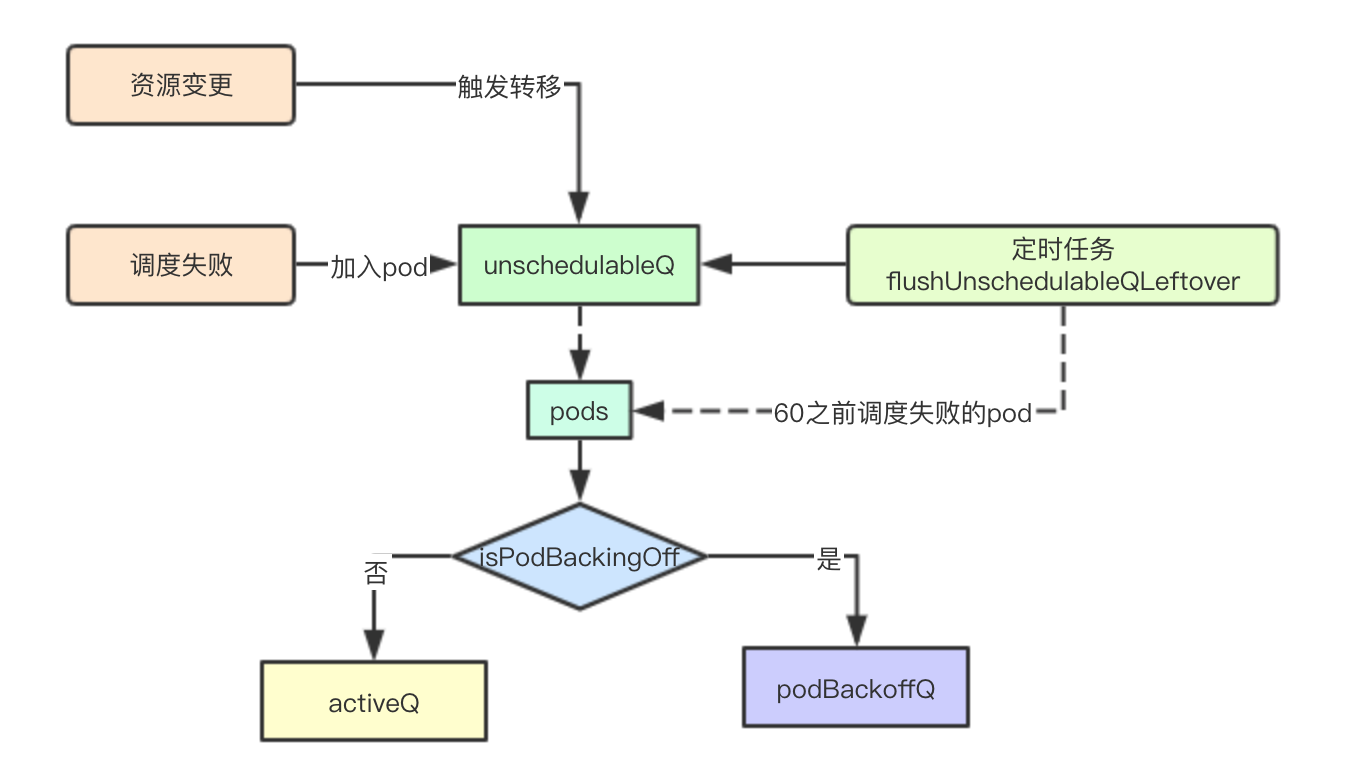 After a schedule failure, join unschedulable if the current cluster resources have not changed, for the reason stated above

Logic is very simple. If the current time-pod's last schedule time is greater than 60s, it is rescheduled and transferred to podBackoffQ or activeQ

The three queues are designed to be stored separately: active queue, bakcoff queue, non-dispatchable queue, where backoff incrementally increases the retry time (up to 10s) based on the failure of the task and unschedulableQ queue is delayed by 60s

Two cycle s, schedulingCycle and moveRequestCycle, are essentially designed to speed up the retry scheduling of failed tasks. When cluster resources change, retry immediately and pod s with higher priority and affinity for failures may be scheduled first.

Thread-safe pop with lock and cond

Today's analysis is here, in fact, referring to this implementation, we can also abstract some design ideas from it to implement our own priority, fast retry, highly available task queue. First of all, the next component of analysis is Scheduler Cache. Interested in this analysis, you can add me to WeChat to communicate and learn together. After all, the three stinky cobblers can't count on Zhu Geliang.