Note: I've built this several times recently. Take notes this time so that I don't forget. It won't be so troublesome next time

Tracker Server: tracking server, which is mainly used for scheduling and plays a role of balance; it is responsible for managing all storage server s and groups. After each storage is started, it will connect to tracker, inform its own group and other information, and keep periodic heartbeat.

storage server: storage server, which mainly provides capacity and backup services; in groups, there can be multiple storage servers in each group, and data is backed up to each other.

Client: client, the server for uploading and downloading data, that is, the server where our own project is deployed. 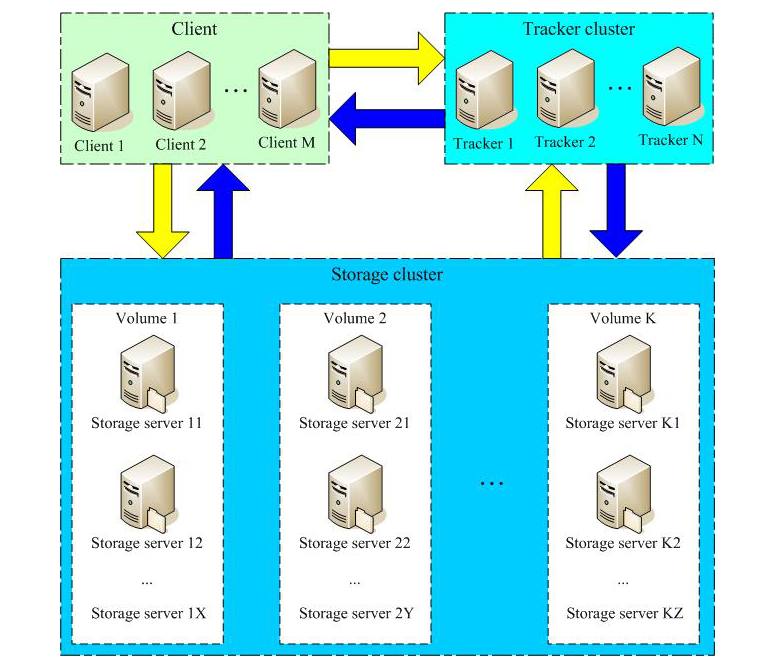 When a server is added to a volume, the system automatically synchronizes the existing files. After the synchronization, the system automatically switches the new server to online service. Volumes can be added dynamically when storage space is low or running out. Simply add one or more servers and configure them as a new volume, increasing the capacity of the storage system.

FastDFS provides users with basic file access interfaces, such as upload, download, append, delete, etc., which are provided to users in the form of client library.

When the Tracker receives a request from the client to upload a file, it will assign a group to store the file. When the group is selected, it will decide which storage server in the group is assigned to the client. When the storage server is allocated, the client sends a write file request to the storage, and the storage will allocate a data storage directory for the file. Then assign a fileid to the file, and finally generate the file name storage file according to the above information. 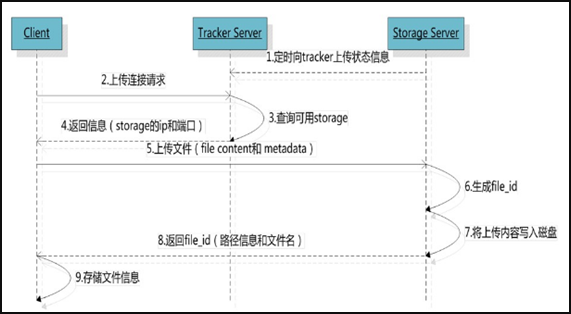 After each storage writes a file, a binlog will be written at the same time. The binlog does not contain file data, but only file name and other meta information. This binlog is used for background synchronization. The storage will record the progress of synchronization with other storage in the group, so that the last progress can continue to be synchronized after restart. The progress is recorded in a time stamp manner, so it is better to ensure that all server s in the cluster can be synchronized The clock of is in sync.

After the client uploadfile succeeds, it will get a file name generated by storage, and then the client can access the file according to the file name. 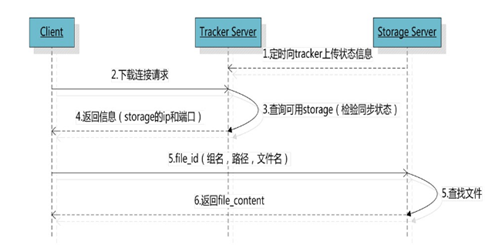 Like the upload file, the client can select any tracker server when downloading. When the tracker sends a download request to a tracker, it must bring the file name information. The tracker parses the group, size, creation time and other information of the file from the file name, and then selects a storage for the request to serve the read request.

libfastcommon is a public C function library extracted from FastDFS and FastDHT. The basic environment can be installed.

Libfastcommon.so is installed to / usr/lib64/libfastcommon.so, but the Lib directory set by FastDFS main program is / usr/local/lib, so soft link needs to be created.

There are two configuration files that need to be modified: Command: VIM / etc / init.d/fdfs'storaged enter a ":", then enter the global replacement command:% s+/usr/local/bin+/usr/bin and press enter to complete the replacement. After the replacement, save and exit the file, and then open it to see if / usr/local/bin has been replaced by / usr/bin. Another is similar to the following:

Method B: use soft connection (recommended)

② Edit tracker.conf. The parameters base path and http.server port need to be modified. Other defaults are OK.

③ Create the tracker basic data directory, that is, the directory corresponding to the base path

For the first successful startup, two directories of data and logs will be created under / home/fdfsdfs/tracker / (configured base path).

To turn off the Tracker command:

⑥ set the Tracker to start

After the Tracker service is started successfully, two directories, data and logs, will be created under base path. The directory structure is as follows:

③ create the Storage basic data directory, corresponding to the base path directory

④ open the storage port in the firewall (23000 by default)

Make sure that Tracker is started before starting Storage. If the initial startup is successful, data and logs will be created in the directory / ljzsg/fastdfs/storage.

To see if Storage and Tracker are communicating: 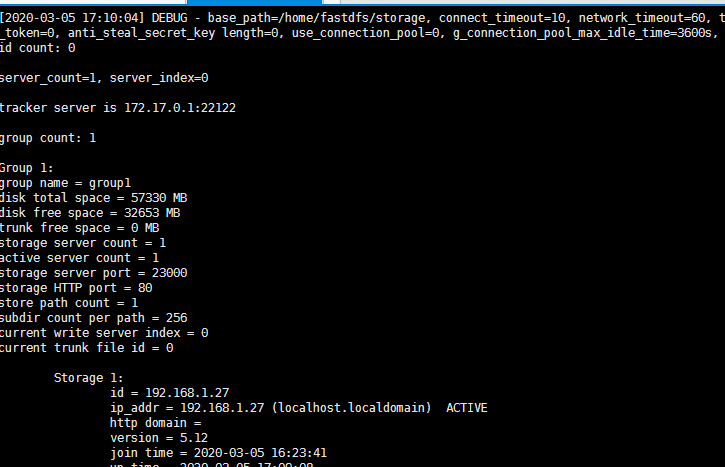 The same as Tracker, after Storage is started successfully, data and logs directories are created under base path to record the information of Storage Server.

In the store? Path0 directory, create the N*N subdirectory:

① Modify the client profile in the Tracker server

Modify the following configuration, other default.

Create the corresponding base path directory and upload the file

After successful upload, the file ID number will be returned: group1/M00/00/00/rBEAAV5hoPOAMh2OAAAk-jRgPlI334.jpg