Introduction to Zookeeper and construction of stand-alone and cluster environment

For more details, please refer to the official documents: http://zookeeper.apache.org/doc/r3.6.0/zookeeperOver.html

3.2 decompress to your own path

Enter the conf directory and copy a copy of zoo sample.cfg to zoo.cfg

Enter the bin directory of the zookeeper decompression package, or add the path to the environment variable, which is more convenient to use (for windows environment, please use the script with the suffix of. cmd).

Verify the status of viewing nodes (2 is Leader, 1, 3 is Follower) 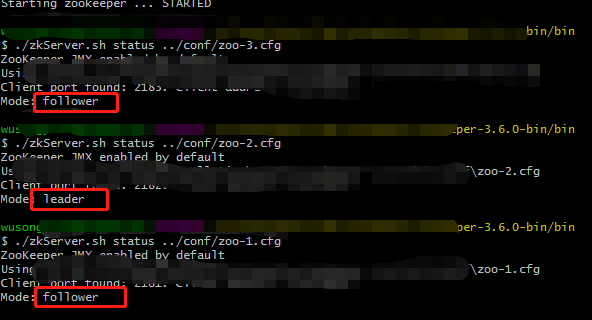 Add Observer node
The other steps are the same, but the configuration file (zoo-ob.cfg) is a little different

5. What zookeeper can do

For more detailed use scenarios and ideas, please refer to: ZooKeeper (2) what can ZooKeeper do?