Perhaps, for many friends who are exposed to the Linux operating system, the first step is to learn in depth through virtual machine software.For one of these software, the network connection of VMware software may be a difficult problem for beginners.The principles and significance of the three network modes provided may not have been understood at all.This subsection then briefly describes the three network modes of VMware: Bridged, NAT, and Host-Only.These three types correspond to VMnet0, VMnet1 (or newly created later), VMnet8 (NAT network card can only have one)

Principle Understanding: The understanding of this mode can be thought of as a virtual switch in which all bridged virtual machines are connected to one interface of the switch. Of course, the physical machines also need to be connected to this switch, that is, all network cards in bridged mode are switching mode, accessible to each other and do not interfere with each other.

Typical features: The IP address of the virtual machine needs to be on the same network segment as the host, and if networking is required, the gateway and DNS need to be consistent with the host network card.

This can be explained in the following illustrations: 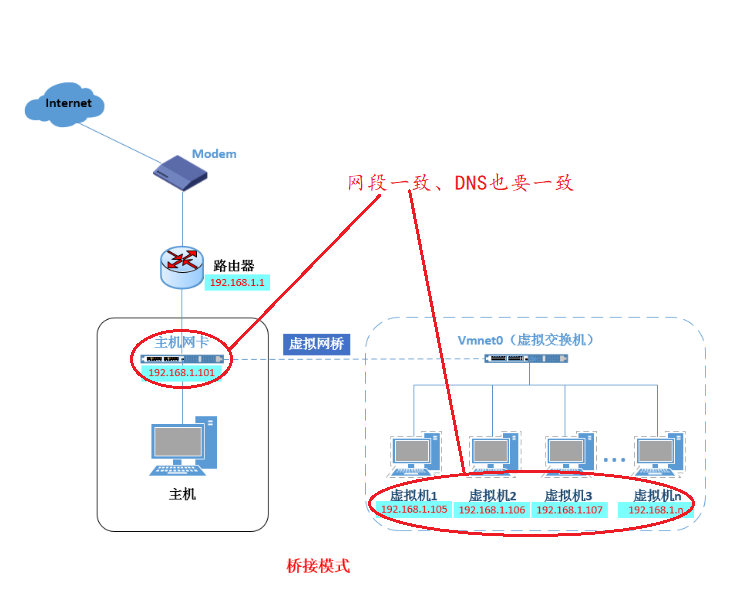 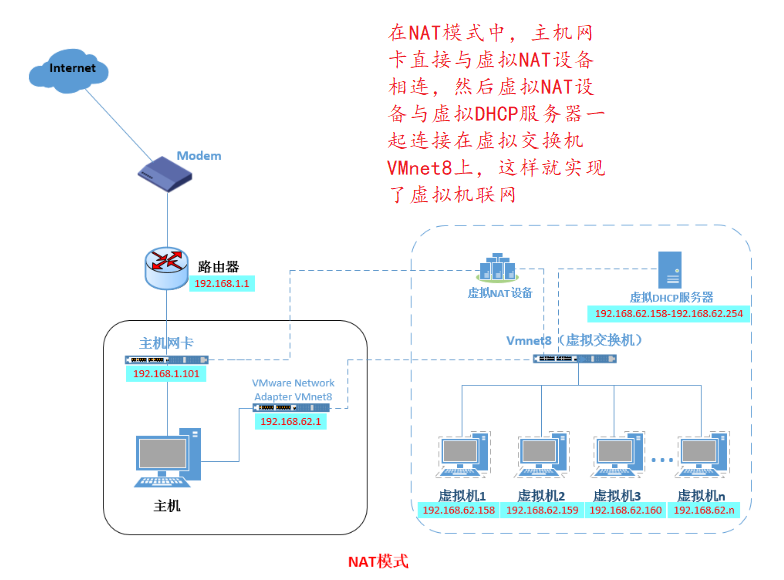 Host-only mode, in fact, is a network mode without NAT devices. It only uses VMnet1 virtual network card to connect with virtual switches to communicate with virtual machines. This mode achieves the isolation of virtual machines from external networks, that is, a single server that communicates with each other only.As shown in the following figure: 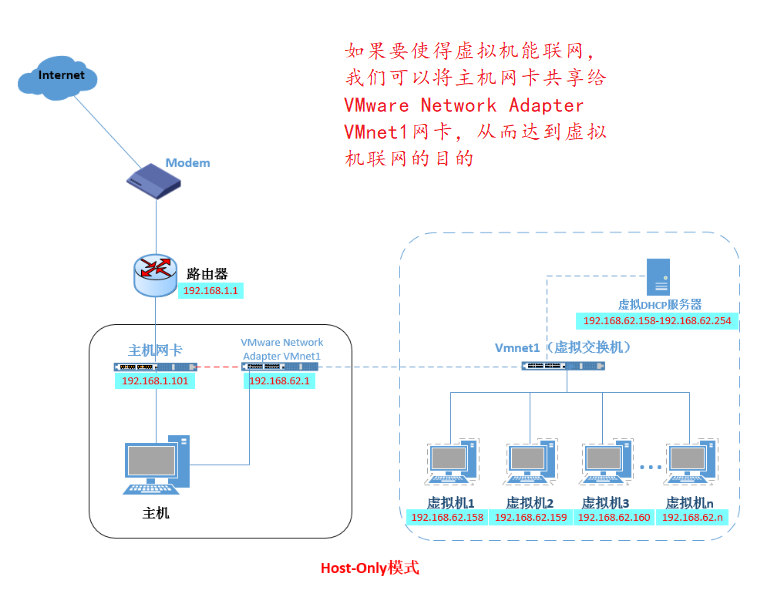 Doker uses Linux bridging, which means that the host machine virtual a docker container bridge (docker0), and when the docker starts a container, it assigns the container an IP address based on the segment of the docker bridge, which is the container ip, and the docker is the default gateway for each container.Therefore, containers within the same host can communicate directly through the container IP address.

Normally, after installing and starting the docker service, we can use the ifconfig command to view the virtual bridge device for this docker0:

(Of course, docker bridges are virtual hosts, not real network devices. External networks cannot be directly addressed through IP addresses. This means that we need to make the external network accessible to the container in other ways, typically by accessing the ports of the host ip-bound container (and ports are typically mapped, which will be described later).Access to row containers.

Actually, after starting the docker service, you can use the docker network related commands to control the management network. Here's a list of the networks: (there are three by default). Here's a step-by-step description (combining the contents of the first section to understand the network principles in docker).

The host mode is understood in conjunction with host-only mode in VMware, as illustrated in the following diagram: 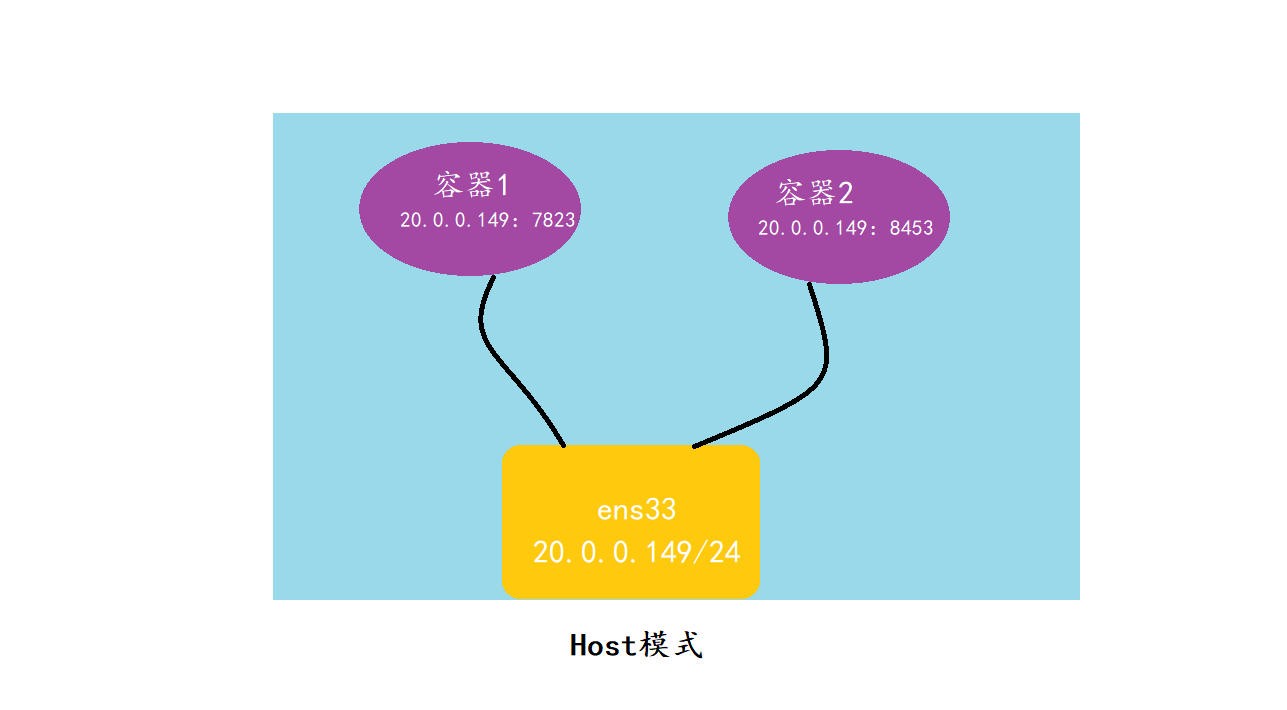 The biggest advantage of this method is that the network performance is good, but the disadvantage is also obvious - the network isolation is weak.

This pattern, as described in the table above, means that a Network Namespace is shared between the specified newly created container and an existing container.This also means that the new container will not create its own network card and other related operations, but will share these resources with the specified container.

This mode is also similar to the host s described above, except for the network, its file system, process list, and so on are all isolated.

Refer to the following figure: 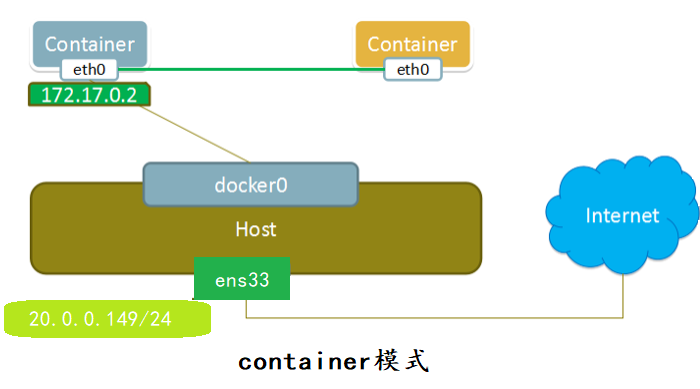 The diagram is as follows: 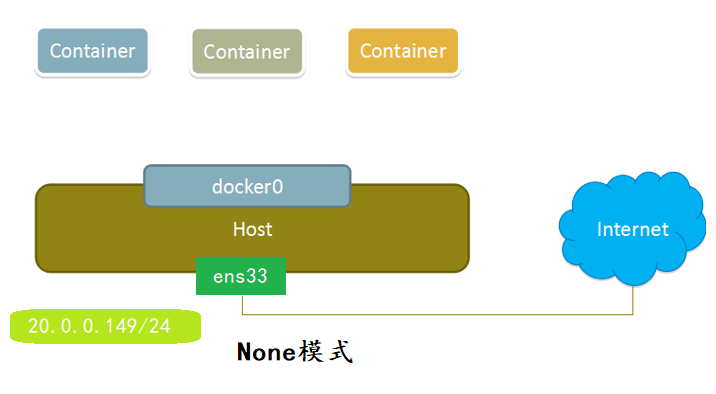 Assign an IP from the docker0 subnet to the container and set the IP address of the docker0 as the default gateway for the container.Create a pair of virtual network card veth pair devices on the host, Docker will VethThe pair device is placed in a newly created container (veth has seen us in OpenStack, and I think it can be understood as a bridge, a virtual device that establishes the relationship between the two sides of the bridge), named eth0 (the container's network card), and on the host, named vethxxx after something similar, and added this network device to docker0In the bridge.

The following is an understanding of the server structure of a node: 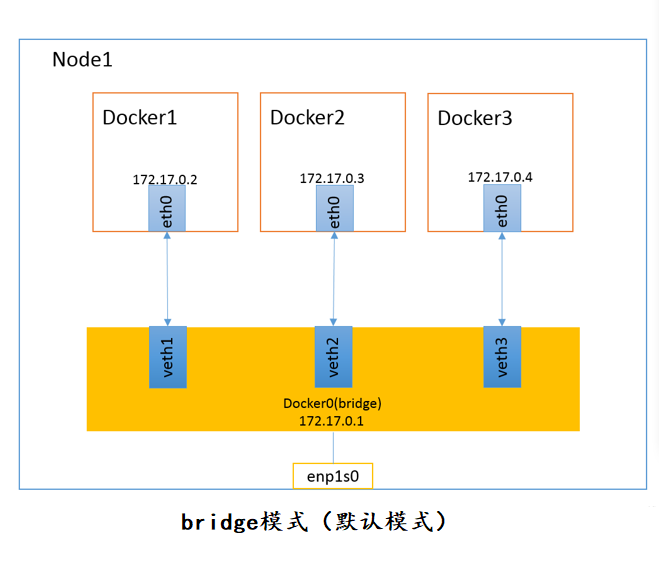 Of course, none of these four modes need to be manually configured. What you really need to configure is a custom network.

We configure the docker network by experimenting, troubleshooting, and validating.

The firewall needs to be turned on because NAT address translation is required, but the core protection is off.

Initialize the environment: (returns to this environment state later)

Let's try to set an ip address (custom) to a container by docker bridge (bridging). Here's a look at the results of the command execution:

First, since the mirror is not altered, the container is pulled out, created, and attempted to run, but an error is encountered because the user's own ip address is only appropriate for the network they define.However, this does not affect the acquisition and creation of the mirror. Let's try running to see the results:

Obviously, the result tells us that this is still the cause of the problem, so you can only delete this container.Let's just revert to the initialization environment (actually, you can remove it--the network bridge won't make a mistake, but the set ip address won't work, so try it yourself). We won't specify an ip address to try, we'll check that we don't add this parameter, and we'll set the ip address in a custom way after reverting to the initialization state.

Enter the container to view the ip address

First, we need to create a custom subnet segment and give it a name by which to set a fixed ip address for the corresponding container.

Unfortunately, error again, don't panic. Let's see what caused this error. It seems that the root cause of this error is the firewall, which means we can't skip the DNA T (Target Network Address Translation) rule. In fact, the cause of this problem is that we just opened the firewall, but did not restart the docker service, which is similar to changing the configuration file and not restarting the service.

A test to verify custom settings for a container's fixed IP address is performed at this time:

The custom network settings container ip address was found to be successful.

In this paper, the working principle of three network modes in VMware software is explained, docker's various network modes are explained step by step, and how docker bridge mode configures container ip address, default mode and customized mode are described in detail through a case combined with troubleshooting ideas.

Finally, it is important to note whether the commands need to be remembered, typed and practiced. Thank you for reading!