Source network, only for learning, if there is infringement, please contact delete.

Before Redis 3.0, sentinel mechanism was used to monitor the status of each node.

Redis Cluster is redis's distributed solution, which was officially launched in version 3.0, effectively solving redis's distributed requirements. When encountering single machine memory, concurrency, traffic and other bottlenecks, the Cluster architecture scheme can be used to achieve the purpose of load balancing.

Redis Cluster mode usually has the characteristics of high availability, scalability, distribution, fault tolerance and so on. There are generally two redis distributed schemes:

The client has decided which redis node the data will be stored in or read from. The main idea is to hash the key of redis data using hash algorithm. Through hash function, a specific key will be mapped to a specific redis node. 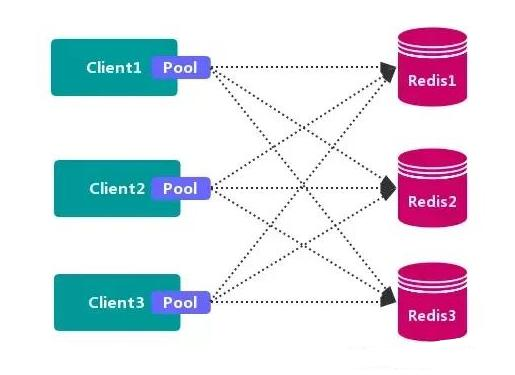 Without the use of third-party middleware, the partition logic is controllable, the configuration is simple, there is no correlation between nodes, it is easy to expand linearly, and it is flexible.

The client cannot dynamically add or delete service nodes. The client needs to maintain its own distribution logic. There is no connection sharing between clients, which will cause connection waste.

The main implementation schemes of proxy partition are tweemproxy and Codis.

Tweetproxy, also known as nutcrawler, is an open-source intermediate proxy for redis and memcache. As a proxy, tweetproxy can accept access from multiple programs, forward it to various redis servers in the background according to routing rules, and then return in the original way. There is a single point of failure in the tweetproxy, so it needs to combine Lvs and preserved to make a highly available solution. 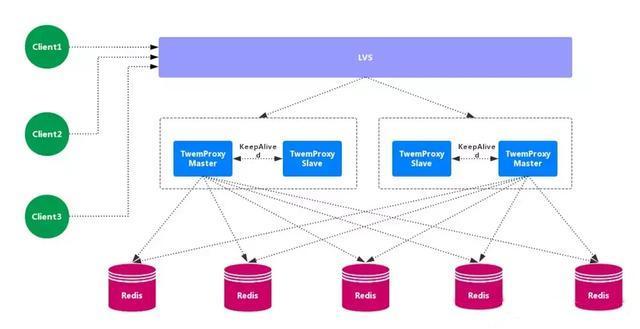 Codis is a distributed Redis solution. For upper level applications, there is no difference between connecting to the Codis proxy and directly connecting to the native Redis server. The bottom layer of Codis will process the request forwarding and data migration without stopping. Codis adopts a stateless agent layer, which is transparent to clients. 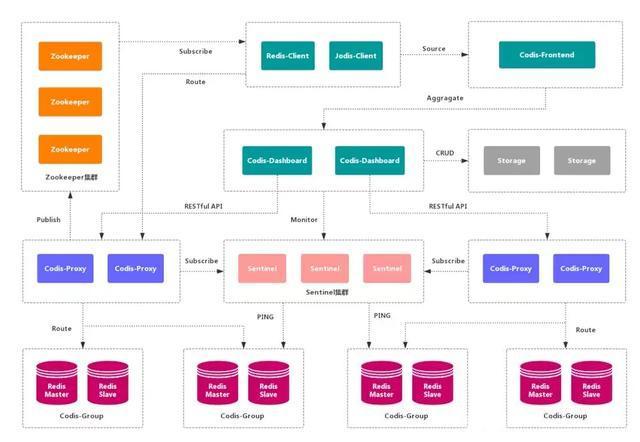 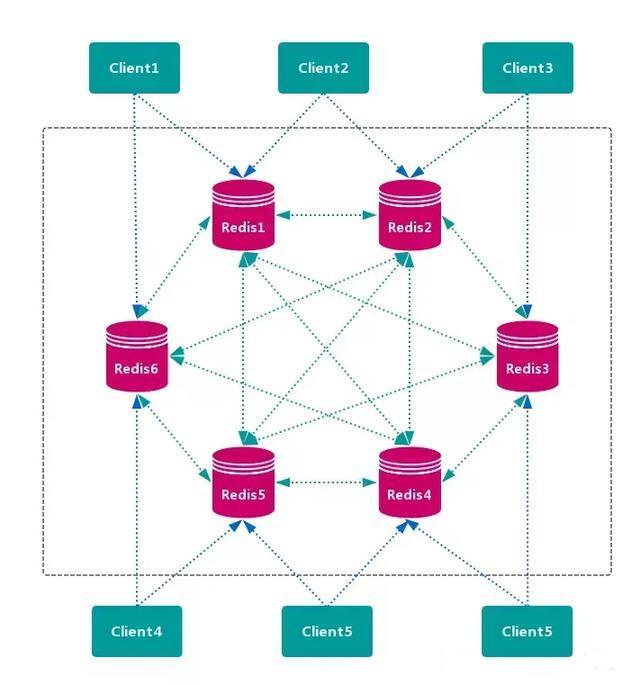 There is no central node, and the data is distributed on multiple Redis instances according to the slot storage. It can smoothly expand / shrink nodes, support high availability and automatic failover, and reduce operation and maintenance costs.

It relies heavily on redis trib tools and lacks monitoring management. It needs to rely on Smart Client (to maintain connection, cache routing table, multipop and Pipeline support). The detection of the Failover node is too slow, which is not as timely as the central node ZooKeeper. The Gossip message has some overhead. Cold and hot data cannot be distinguished according to statistics. 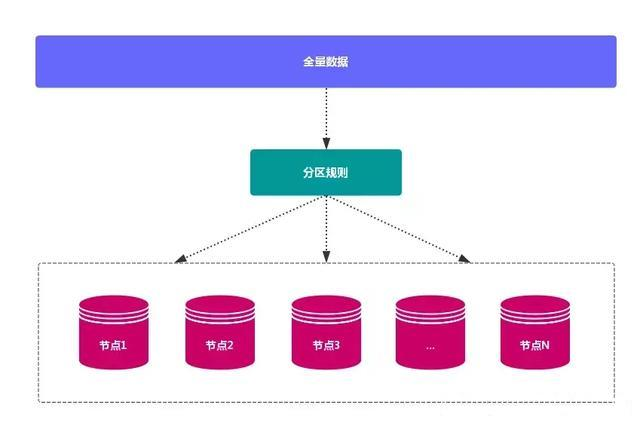 There are two ways of data distribution: hash partition and sequential partition. The comparison is as follows:

Use specific data, such as Redis key or user ID, and then use the formula: hash (key)% N to calculate the hash value according to the number of nodes N, which is used to determine which node the data is mapped to. 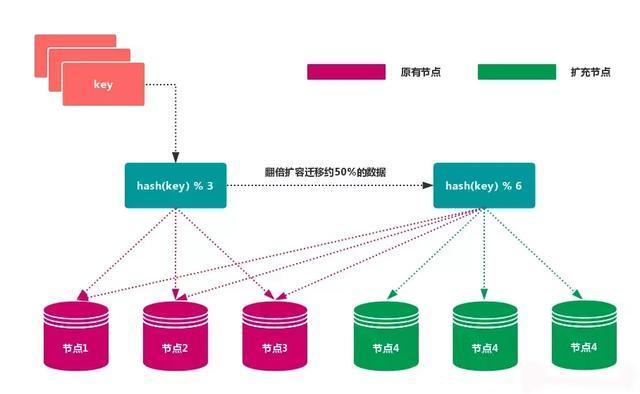 The outstanding advantage of this method is its simplicity, which is often used in the database sub database sub table rules. Generally, the pre partition method is adopted, and the number of partitions is planned according to the data amount in advance.

For example, it can be divided into 512 or 1024 tables to guarantee the data capacity in the future, and then the tables can be migrated to other databases according to the load. In the process of capacity expansion, it is usually used to double the capacity, so as to avoid data mapping being disrupted, leading to full migration.

When the number of nodes changes, such as expanding or shrinking nodes, the mapping relationship of data nodes needs to be recalculated, which will lead to data re migration.

The consistency Hash can solve the stability problem well. All storage nodes can be arranged on the ending Hash ring. Each key will find the adjacent storage nodes clockwise after calculating the Hash. When a node is added or exited, it only affects the subsequent nodes that are adjacent to each other clockwise on the Hash ring. 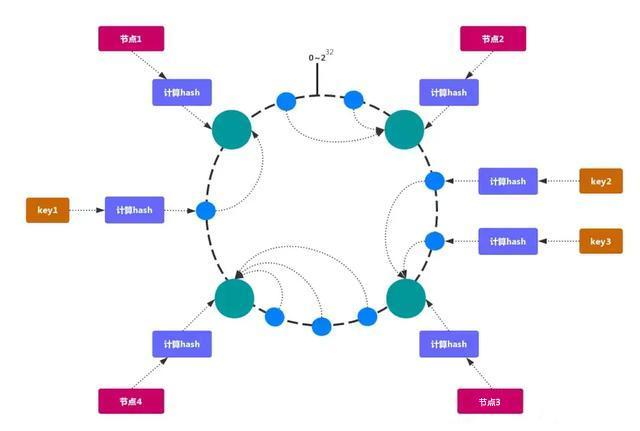 Adding and deleting nodes only affect the adjacent nodes in the clockwise direction of the hash ring, but not the other nodes.

Adding and subtracting nodes will cause some data in the hash ring to fail to hit. When a small number of nodes are used, the change of nodes will affect the data mapping in the hash ring in a large range, which is not suitable for the distributed scheme of a small number of data nodes. In order to balance data and load, a common consistent hash partition needs to double or subtract half of nodes when increasing or decreasing nodes.

Note: because of these shortcomings of consistent hash partition, some distributed systems use virtual slots to improve consistent hash, such as Dynamo system.

Virtual slot partition cleverly uses hash space, and uses hash function with good dispersion to map all data to a fixed range of integers, which are defined as slots.

This range is generally much larger than the number of nodes. For example, the Redis Cluster slot range is 0 ~ 16383. Slot is the basic unit of data management and migration in a cluster. The main purpose of using large-scale slots is to facilitate data splitting and cluster expansion. Each node will be responsible for a certain number of slots, as shown in the figure: 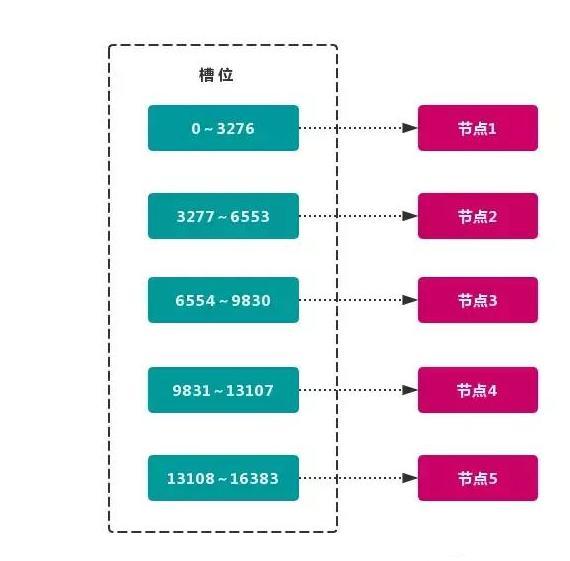 Currently, there are five nodes in the cluster, each node is responsible for about 3276 slots on average. Due to the use of high-quality hash algorithm, the data mapped by each slot is usually relatively uniform, and the data is divided into five nodes for data partition. Redis Cluster uses virtual slot partition.

This structure makes it easy to add or remove nodes. If you add a node 6, you need to get some slots from nodes 1 to 5 to allocate to node 6. If you want to remove node 1, you need to move the slot in node 1 to nodes 2 to 5, and then remove node 1 without any slot from the cluster.

Since moving a hash slot from one node to another does not stop the service, adding or deleting or changing the number of hash slots for one node will not cause the cluster to be unavailable.

Redis Cluster uses virtual slot partition, and all keys are mapped to 0 ~ 16383 integer slots according to the hash function. Calculation formula: slot = CRC16 (key) & 16383. Each node is responsible for maintaining a part of the slot and the key value data mapped by the slot, as shown in the figure: 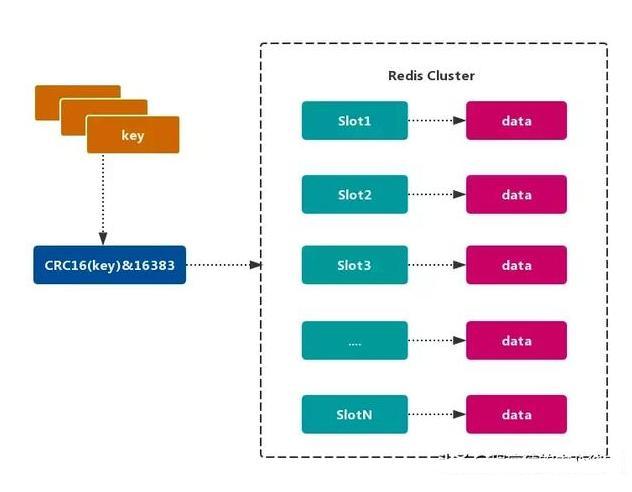 Decoupling the relationship between data and nodes simplifies the difficulty of node expansion and contraction.

The node itself maintains the mapping relationship of the slot. No client or agent service is required to maintain the metadata of the slot partition.

It supports mapping query among nodes, slots and keys, and is used in data routing, online scaling and other scenarios.

Redis cluster has some limitations on the function of a single machine, which need to be understood by developers in advance and avoided when using.

Similar to mset and mget operations, currently only batch operations are supported for keys with the same slot value. key mapped to different slot values is not supported because operations such as mget and mget may exist on multiple nodes.

key as the minimum granularity of data partition

You cannot map a large key value object such as hash, list, etc. to different nodes.

Multiple database spaces are not supported

Redis on a single machine can support 16 databases (db0 ~ db15), and only one database space, db0, can be used in cluster mode.

Replication structure only supports one layer

Only the master node can be copied from the slave node, and nested tree replication structure is not supported.

Redis Cluster is an official high availability solution of redis. There are 2 ^ 14 (16384) slots in redis Cluster. After the Cluster is created, the slots are evenly allocated to each redis node.

Here's how to start the cluster service of six Redis and use redis-trib.rb Create a cluster of 3 master and 3 slave. The following three steps are needed to build a cluster:

Redis cluster is generally composed of multiple nodes, and the number of nodes is at least 6, to ensure the formation of a complete and highly available cluster. Each node needs to enable cluster enabled yes to enable redis to run in cluster mode.

The nodes of Redis cluster are planned as follows:

Configure the redis.conf , the following is only the basic configuration needed to build the cluster, which may need to be modified according to the actual situation.

redis-trib.rb It is an official redis cluster management tool. It is integrated in the source src directory of redis. It encapsulates the cluster commands based on redis into a simple, convenient and practical operation tool.

View redis-trib.rb Whether the command environment is correct, the output is as follows:

redis-trib.rb It's done by redis author in ruby. redis-trib.rb The specific functions of the command line tool are as follows: 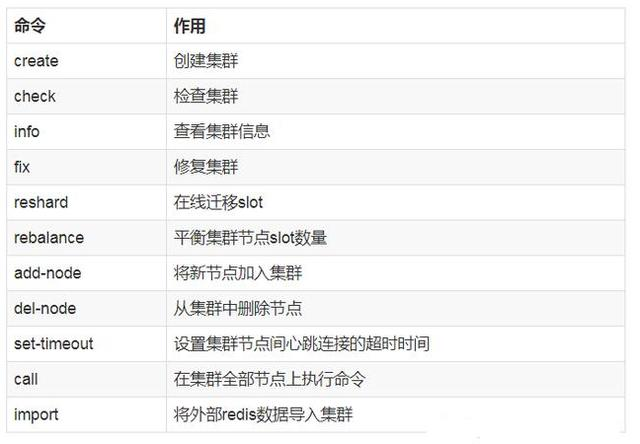 After the startup is completed, redis starts in cluster mode to view the process status of each redis node:

In each redis node redis.conf In the file, we have configured the file path of cluster config file. When the cluster is started, the conf directory will generate a new cluster node configuration file. View the file list as follows:

The six redis nodes are arranged from left to right in order from master to slave.

After the cluster is created, redis trib will first allocate 16384 hash slots to three primary nodes, namely redis-6379, redis-6380 and redis-6381. Then point each slave node to the master node for data synchronization.

Then type yes, redis-trib.rb The node handshake and slot allocation operation are started, and the output is as follows:

3.3. Logs of the redis primary node

It can be found that through the BGSAVE command, the slave node redis-6389 asynchronously synchronizes data from the master node redis-6379 in the background.

Use redis- trib.rb The check command checks whether the two clusters created before are successful. The check command only needs to give the address of any node in the cluster to complete the check of the whole cluster. The command is as follows:

When the following information is finally output, it indicates that all the slots in the cluster have been allocated to the node:

Finally, an example of a virtual slot cluster with three primary and three secondary is built by using redis trib.

I have compiled the interview questions and answers into PDF documents, as well as a set of learning materials, including Java virtual machine, spring framework, java thread, data structure, design pattern, etc., but not limited to this.

Focus on the official account [java circle] for information, as well as daily delivery of quality articles. 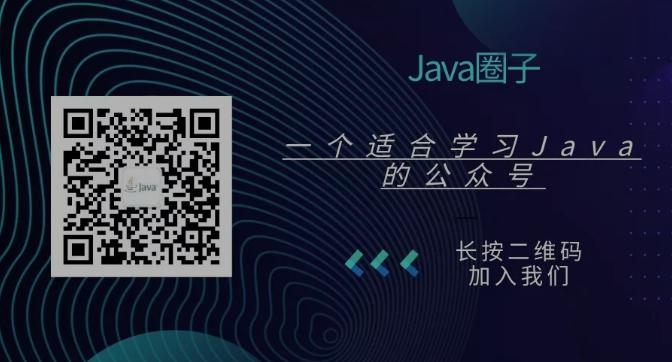