In the process of software development, some objects in the application may make different behaviors according to different situations. We call this kind of object stateful object, and one or more dynamically changing attributes that affect the behavior of the object state. When stateful objects interact with external events, their internal state will change, so that their behavior will also change. If people are happy and sad, different emotions have different behaviors. Of course, the outside world will also affect their emotional changes.

For this stateful object programming, the traditional solution is to consider all these possible situations, and then use if else or switch case statements to judge the state, and then deal with different situations. However, it is obvious that this method has natural disadvantages for complex state judgment. The conditional judgment statements will be too bloated, poor readability, non extensible and difficult to maintain. When adding a new state, a new if else statement should be added, which violates the "opening and closing principle" and is not conducive to the expansion of the program.

The above problems can be well solved if the "state mode" is adopted. The solution idea of state mode is: when the conditional expression controlling the state transition of an object is too complex, extract the relevant "judgment logic" and represent it with different classes. In which case the system is in, directly use the corresponding state class objects for processing, so as to simplify the original complex logic judgment and eliminate if else Redundant statements such as switch case make the code more hierarchical and have good scalability.

Definition and characteristics of state mode

For stateful objects, the complex "judgment logic" is extracted into different state objects, allowing the state object to change its behavior when its internal state changes.

Structure and implementation of state pattern

State mode packages the behavior of objects changed by the environment in different state objects. Its intention is to make an object change its behavior when its internal state changes. Now let's analyze its basic structure and implementation method.

1. Structure of the model

Its structure is shown in Figure 1. 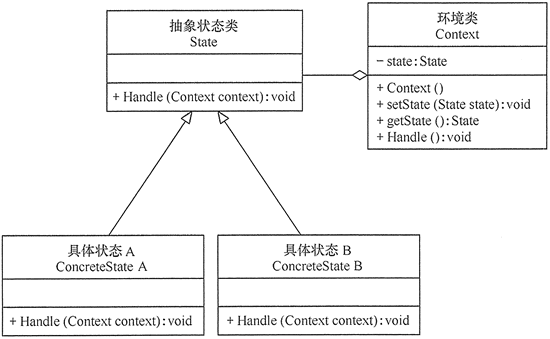 The implementation code of status mode is as follows:

The running results of the program are as follows:

[example] use "state mode" to design a state conversion program for students' grades.

Then, define the "failed" state class LowState, "medium" state class MiddleState and "excellent" state class HighState, which are specific state classes and implement the checkState() method, which is responsible for checking their own state and converting according to the situation.

Finally, the environment class (ScoreContext) is defined, which contains the current state object and the method add(int score) for adding and subtracting points. The customer class uses this method to change the score state. Figure 2 shows its structure. 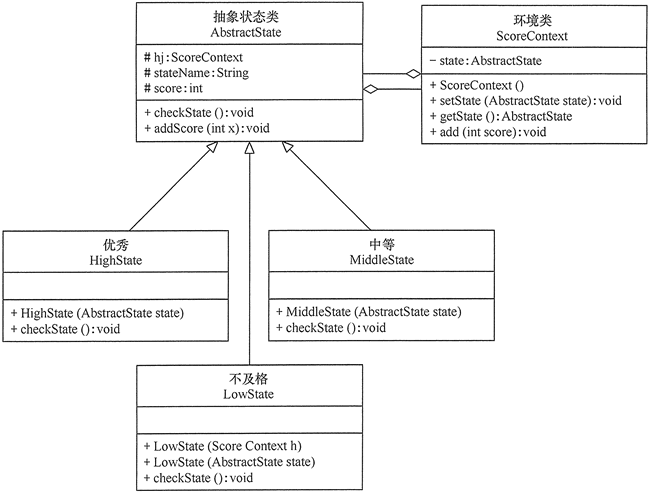 The program code is as follows:

The running results of the program are as follows:

You can usually consider using state mode in the following cases.