Delegate: Class a delegates the function to class b
Class A contains a function class b pointer or object. When the function of b function class is used, the function of b is called through its pointer or object. In the view of the calling module, the problem is solved by class A. in fact, class a solves the problem through its member class b object or pointer. This process is "A entrusts b to complete the problem".
Incidentally, a dependent on b refers to the pointer of a class containing a base class of b, which is not necessarily a base class object, because the base class may be a virtual base class and cannot produce an object.

Facade mode: or appearance mode (is it the front desk? Have a cup of coffee.)

Definition: the external and internal communication of a subsystem must be carried out through a unified object.

Unified object (facade): a class,
In this class, all functional classes that are called in the subsystem are dependent on (including functional class base classes) or related (including functional subclasses).
This class only provides one external interface (only one public function, and the remaining data or function access permissions are not public) to represent externally callable services;
In this open interface function, it is necessary to call the function classes in all subsystems to meet the requirements,
When the requirements change, the internal dependent or associated function classes and call logic are extended according to the requirements, and the service interface functions provided by this class remain unchanged,

effect:
Decouple the function class from the high-level calling module to reduce the interdependence of the system,
External access to the subsystem will lead to strong coupling, low cohesion and difficult maintenance;
A service interface of external access facade class can be weakly coupled, highly cohesive and easy to expand internally,
It has no effect on the caller because the external interface has not changed.

Disadvantages:
It does not comply with the opening and closing principle. It is closed for modification and open for expansion. When there are errors that need to be repaired after the system is put into operation, it can only modify the code of the facade, and inheritance and overwriting are not useful. Therefore, it is necessary to be cautious in design.

Usage scenario:
Provide an excuse for a complex module or subsystem to be accessed by the outside world.
The subsystem is relatively independent and is a black box to the outside, such as calculating interest, health score, comprehensive score, etc.
To prevent the risk diffusion caused by low-level personnel, low-level technicians in project development are easy to affect the overall project due to the quality of personal code, so it is necessary to specify their development in the specified subsystem, and then provide an interface for access operation.

A scene in which a subsystem has multiple facade:
The facade is too big to bear: if the code exceeds 200 lines, it is recommended to split it.
The subsystem has different access paths: different levels, different permissions, different resources, etc. you can extend the facade (inheritance or agent).

Code example: the front desk does not produce coffee, but just the porter of coffee, and entrusts the task of producing coffee to the kitchen 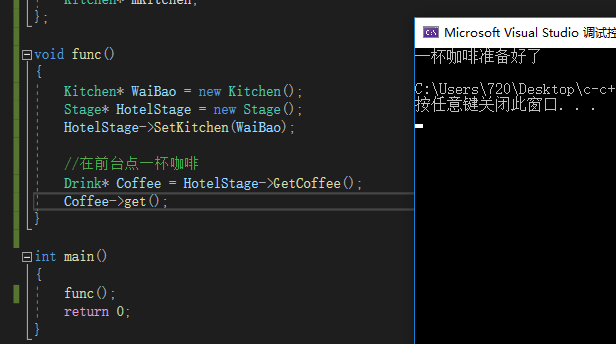