There are five states in the thread pool

The execution process of execute method is as follows:

Thread is the smallest unit for scheduling CPU resources. The thread model is divided into KLT model and ULT model, KLT model used by JVM, and java thread and OS thread maintain a 1:1 mapping relationship, that is, a java thread will also have a corresponding thread in the operating system. Java threads have multiple lifestates

The status switching is shown in the following figure: 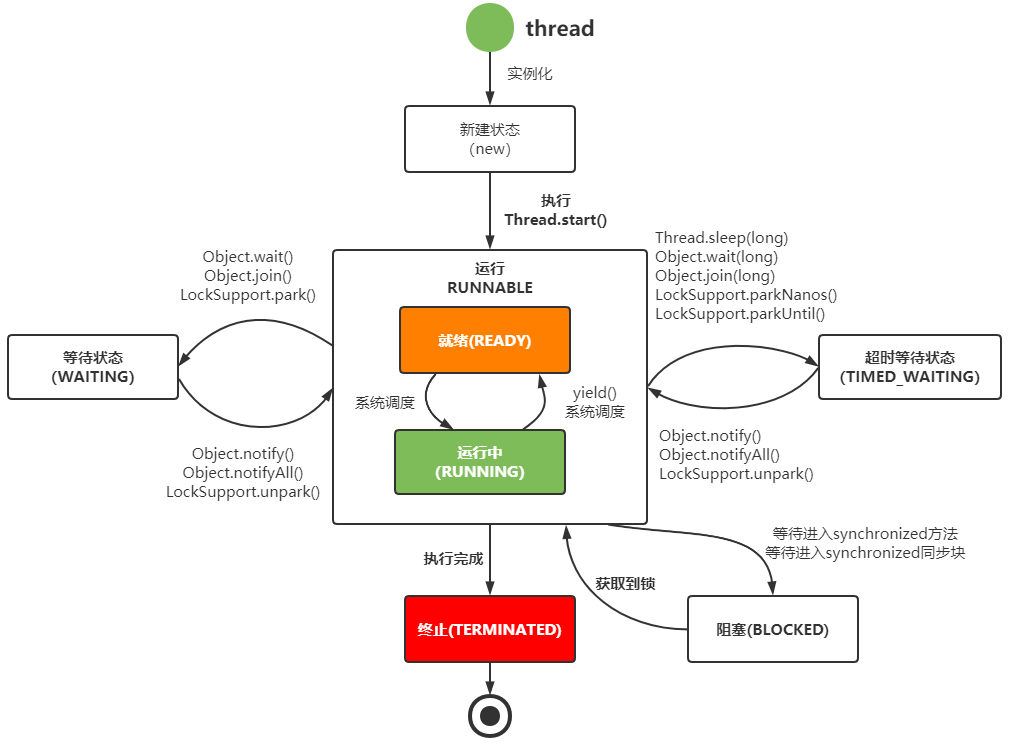 The purpose of cooperative process (fiber process, user level thread) is to maximize the performance of hardware and improve the speed of software. The basic principle of cooperative process is: hang the current task at a certain point, save the stack information and execute another task; After completing or reaching a certain condition, restore the original stack information and continue execution (the whole process thread does not need context switching).

Java Native does not support coroutines. If you need to use coroutines in pure java code, you need to introduce third-party packages, such as quasar

"Thread pool", as its name implies, is a thread cache. Threads are scarce resources. If they are created without restrictions, they will not only consume system resources, but also reduce the stability of the system. Therefore, Java provides a thread pool to uniformly allocate, tune and monitor threads

In web development, the server needs to accept and process requests, so it will allocate a thread to process a request. If a new thread is created for each request, it is very easy to implement, but there is a problem:

If the number of concurrent requests is very large, but the execution time of each thread is very short, threads will be created and destroyed frequently, which will greatly reduce the efficiency of the system. It is possible that the server spends more time and system resources on creating new threads and destroying threads for each request than it does on processing actual user requests.

So is there a way to complete one task without being destroyed, but can continue to perform other tasks?

This is the purpose of thread pool. Thread pool provides a solution to the overhead and insufficient resources of thread life cycle. By reusing threads for multiple tasks, the cost of thread creation is allocated to multiple tasks.

When do I use thread pools?

The Executor interface is the most basic part of the thread pool framework. It defines an execute method for executing Runnable.

The following figure shows its inheritance and implementation

As can be seen from the figure, there is an important sub interface ExecutorService under Executor, which defines the specific behavior of thread pool

2. Submit (task): it can be used to submit a Callable or Runnable task and return the Future object representing the task

3. shutdown (): close the work after completing the submitted task and no longer take over the new task,

4. Shutdown now (): stop all tasks being performed and close the work.

5. isTerminated(): test whether all tasks have been completed.

There are five states in the thread pool

(1) Status description: when the thread pool is in RUNNING status, it can receive new tasks and process added tasks.

(1) Status description: when the thread pool is in SHUTDOWN status, it does not receive new tasks, but can process added tasks.

(1) Status description: when the thread pool is in STOP status, it will not receive new tasks, will not process added tasks, and will interrupt the tasks being processed.

(1) Status description: when the thread pool is completely TERMINATED, it becomes TERMINATED.

(2) State switching: when the thread pool is in TIDYING state, after executing terminated(), it will be changed from TIDYING - > terminated.

The conditions for entering TERMINATED are as follows:

The thread pool maintains the idle time allowed by threads. When the number of threads in the thread pool is greater than the corePoolSize, if no new task is submitted, the threads outside the core thread will not be destroyed immediately, but will wait until the waiting time exceeds keepAliveTime;

It is used to save the blocking queue of the task waiting to be executed, and the task must implement the Runable interface. The following blocking queue is provided in the JDK:

It is a variable of type ThreadFactory used to create a new thread. By default, Executors.defaultThreadFactory() is used to create threads. When a thread is created using the default ThreadFactory, the newly created thread will have the same NORM_PRIORITY priority and is a non daemon thread. It also sets the name of the thread.

The saturation strategy of the thread pool. When the blocking queue is full and there are no idle working threads, if you continue to submit a task, you must adopt a strategy to process the task. The thread pool provides four strategies:

The above four strategies are internal classes of ThreadPoolExecutor.

Of course, the RejectedExecutionHandler interface can also be implemented according to the application scenario to customize the saturation strategy, such as logging or persistent storage of tasks that cannot be processed. 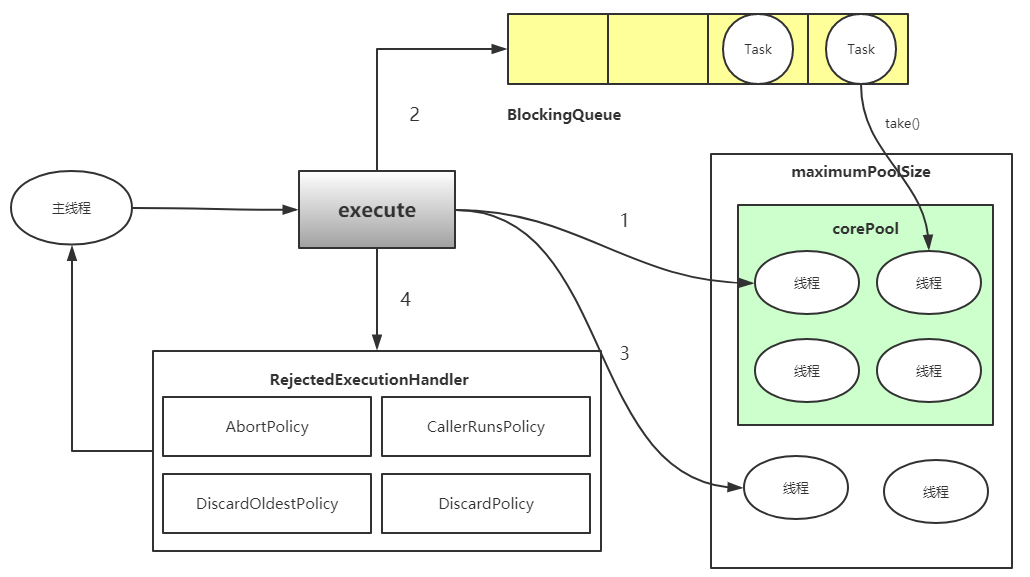 Simply put, when executing the execute() method, if the status is always RUNNING, the execution process is as follows:

Note that addWorker(null, false);, That is, a thread is created, but no task is passed in. Because the task has been added to the workQueue, the worker will directly obtain the task from the workQueue when executing. Therefore, when workerCountOf(recheck) == 0, execute addWorker(null, false); In order to ensure that the thread pool is in the RUNNING state, there must be a thread to execute tasks.

The execution process of execute method is as follows: 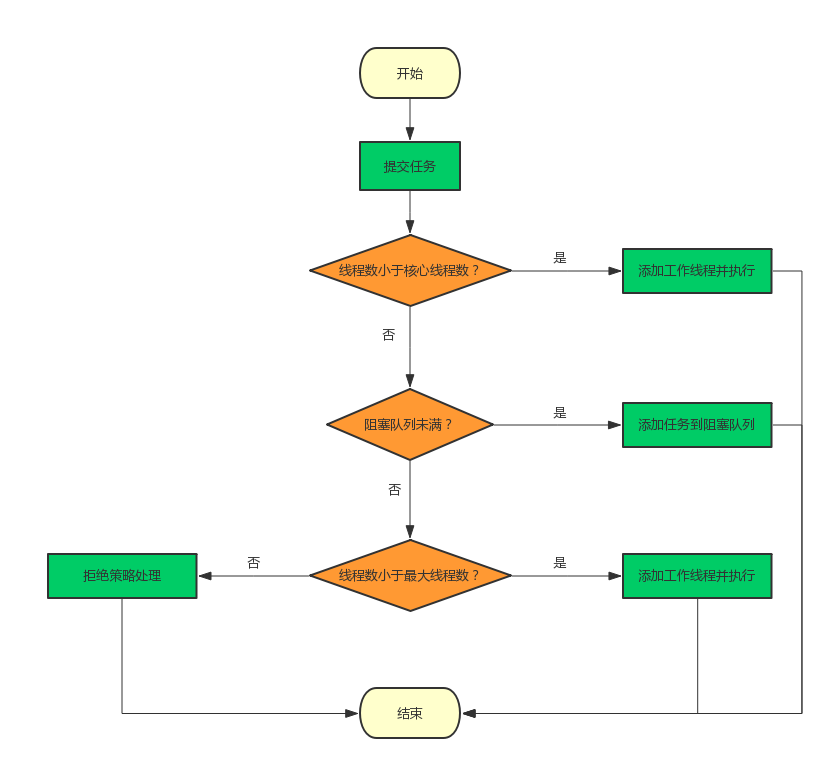 Each thread in the thread pool is encapsulated into a Worker object. ThreadPool actually maintains a group of Worker objects. See JDK source code.

The Worker class inherits AQS and implements the Runnable interface. Note the firstTask and thread attributes: firstTask uses it to save the incoming task; Thread is a thread created through ThreadFactory when calling the construction method. It is a thread used to process tasks.

When calling the construction method, you need to pass in the task through getThreadFactory().newThread(this); To create a new thread. The parameter passed in by the newThread method is this. Because the Worker itself inherits the Runnable interface, that is, a thread, a Worker object will call the run method in the Worker class when it is started.

Worker inherits AQS and uses AQS to realize the function of exclusive lock. Why not use ReentrantLock? You can see the tryAcquire method, which does not allow reentry, while ReentrantLock allows reentry:

Therefore, Worker inherits from AQS and is used to determine whether a thread is idle and can be interrupted.

In addition, setState(-1) is executed in the constructor;, Set the state variable to - 1. Why? This is because the default state in AQS is 0. If a Worker object has just been created and the task has not been executed, it should not be interrupted. Take a look at the tryAquire method:

The tryAcquire method determines whether the state is 0. Therefore, setState(-1); The state is set to - 1 to prevent the thread from being interrupted before executing the task.

Because of this, in the runWorker method, the unlock method of the Worker object will be called first to set the state to 0.

Here is the first if judgment. The purpose is:

Unable to accept new tasks or process tasks in the queue will interrupt the thread processing tasks. When the thread pool is in the RUNNING or SHUTDOWN state, calling the shutdownNow() method will bring the thread pool into this state.

The beforeExecute method and afterExecute method here are empty in the ThreadPoolExecutor class and are left to be implemented by subclasses.

The completedAbruptly variable indicates whether an exception occurs during task execution. The value of this variable will be judged in the processWorkerExit method.

The getTask method is used to fetch tasks from the blocking queue. The code is as follows:

When the getTask method returns null, the while loop will jump out of the runWorker method, and then the processWorkerExit method will be executed. 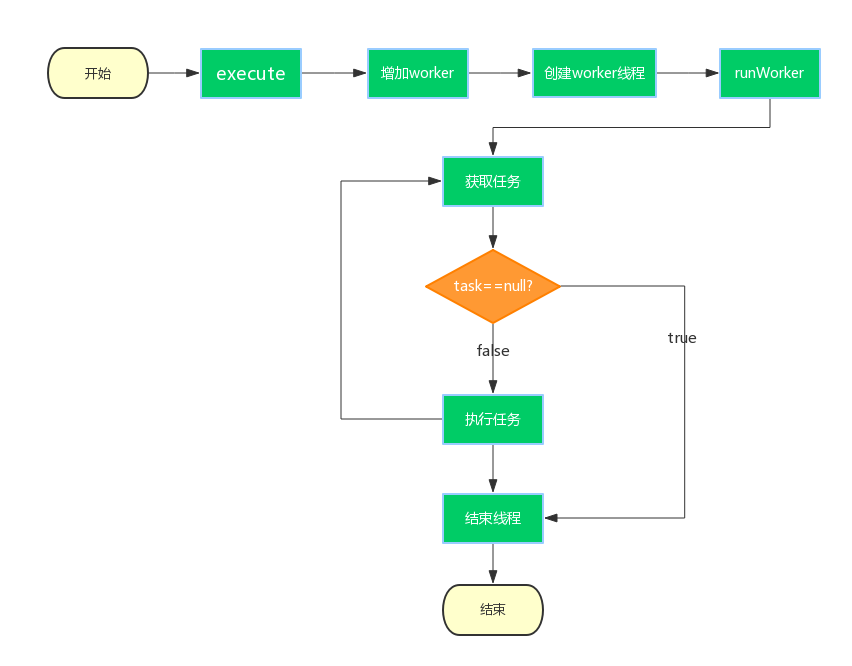