Upgrade to spring 5.3.0 After X, the number of GC increased sharply, and I was stupid

Recently, our project was upgraded to spring boot 2.4 6 + Spring Cloud 2020.0. x. As can be seen from my other series: Spring Cloud upgrade path . However, after the upgrade, we found that the YoungGC increased significantly and the rate of allocating objects increased significantly, but the promoted objects did not increase. It was proved that they were newly created objects and could be recycled soon. Let's look at the monitoring of one process. At this time, the http request rate is about 100:

This is very strange. The request rate is not so large, but through monitoring, it can be seen that nearly two gigabytes of memory are allocated per second. Before upgrading, the allocation rate is about 100-200 MB, at the same request rate. So where is the extra memory consumed?

We need to look at the statistics of various objects in memory, that is, using the jmap command. At the same time, you can't just view the statistics of surviving objects, because it can be seen from the monitoring that there are not too many objects in the old age, because the number of promoted objects has not increased. On the contrary, it would be better if we could exclude the surviving objects. At the same time, because GC is quite frequent, there will be one in about 1s. So we can't expect to catch the jmap we want at one time. At the same time, jmap will cause all threads to enter safepoint and STW, which has a certain impact on the line, so jmap cannot be too frequent. Therefore, we adopt the following strategies:

Through these jmap comparisons, we find that the top object types in jmap statistics have a spring framework:

How is this object created? How to locate a frequently created object that no longer exists, and the object type is internal to the framework?

First of all, MAT (Eclipse Memory Analyzer) + jmap dump is not suitable for the whole heap analysis because:

Although this problem cannot be located in this way, I still put the jmap dump results I collected here and show you the results of MAT analysis:

So how to analyze it next? This uses our old friend, JFR + JMC. Regular readers know that I often use JFR to locate online problems. How can I use it here? There is no direct JFR event statistics on which objects are often created, but there are indirect events that can indirectly reflect who created so many objects. I usually position it this way:

First, check the Thread Allocation Statistics event. It is found that basically all servlet threads (that is, the threads processing Http requests, which we use Undertow, so the thread name starts with XNIO) have a lot of allocated objects, which can not locate the problem:

Then let's look at the hot code statistics. Click the Method Profiling Sample event to view the stack tracking statistics to see which accounts for a high proportion. 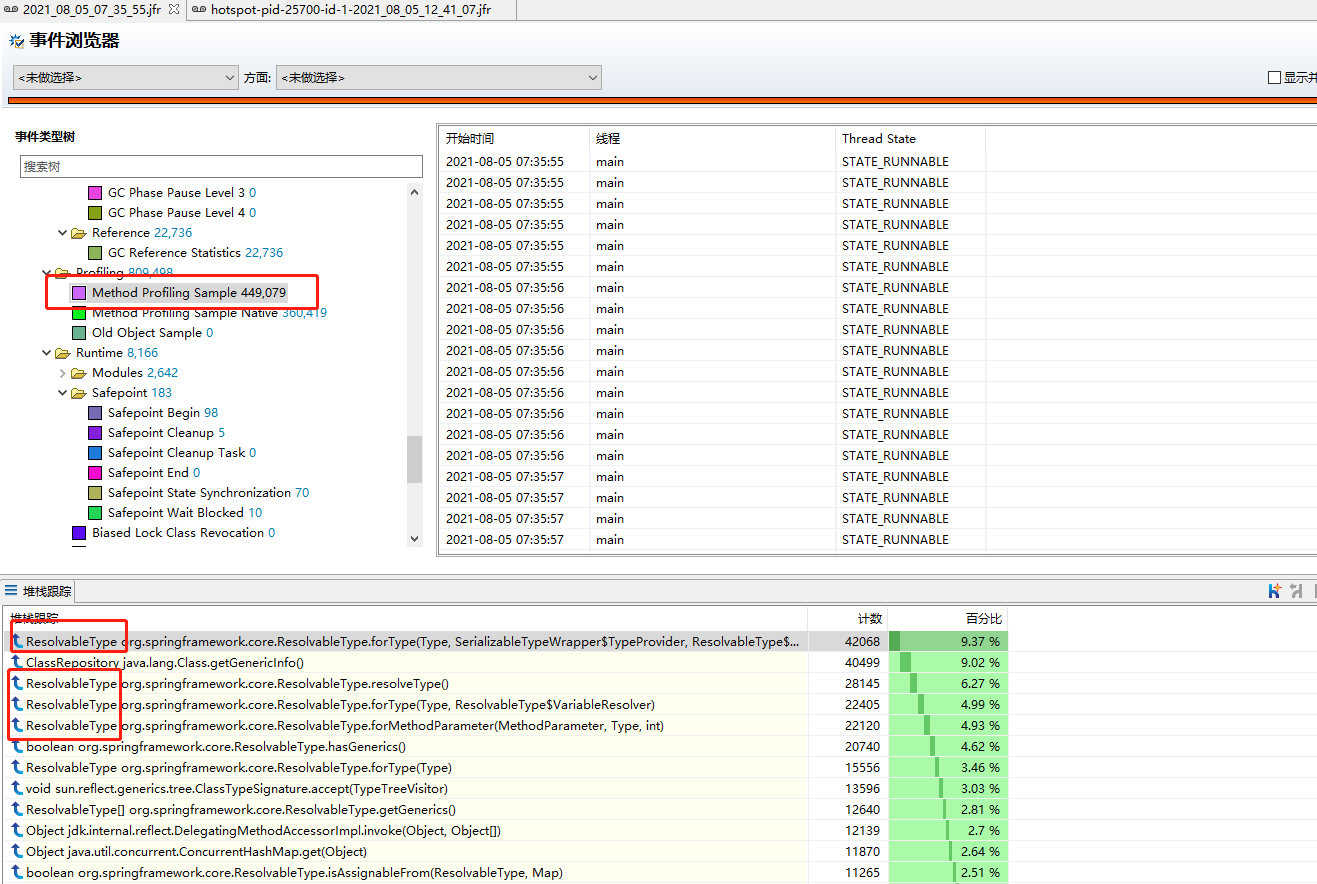 It is found that the highest proportion seems to be related to this resolvable type. Further locate it and double-click the first method to view the call stack statistics: 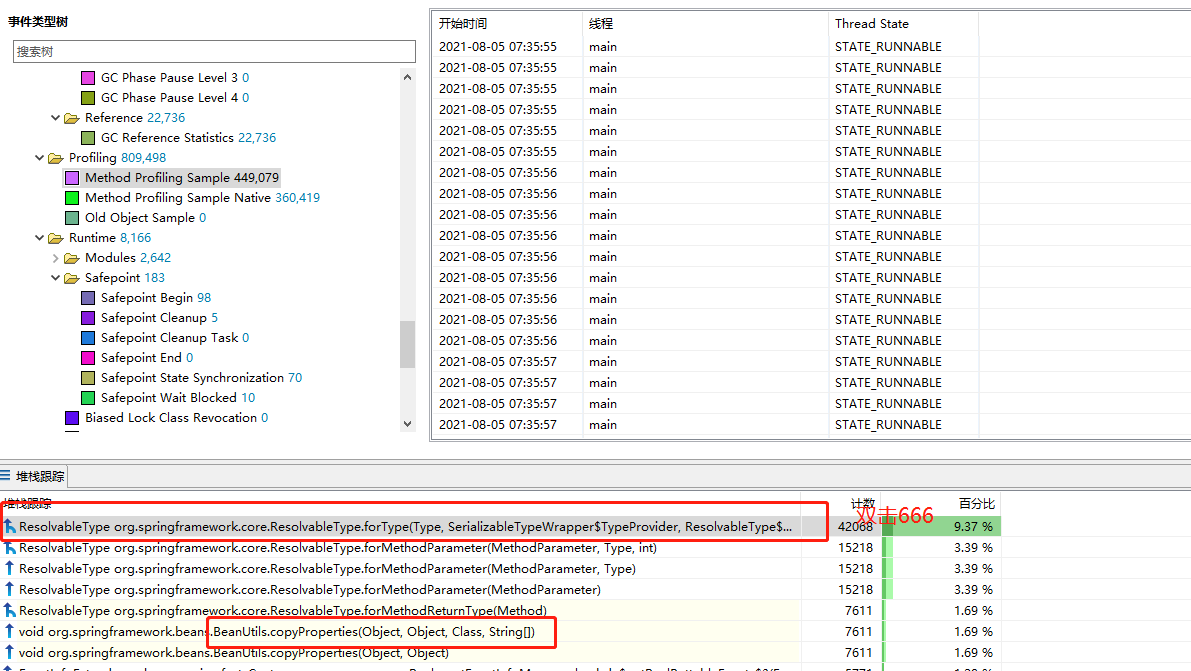 We found that it was called by BeanUtils copyProperties. Check other resolvable type related calls, which are related to BeanUtils About copyproperties. This method is often used in our project to copy attributes of the same type or between different types. Why does this method create so many resolvable types?

By looking at the source code, we found that from spring 5.3 Starting with X, BeanUtils starts to copy properties by creating a unified class information encapsulation of resolvable type:

The source code inside creates a new resolvable type for each attribute method of the type of the source object and the target object every time, and there is no cache. This leads to a replication, which will create a large number of resolvable types Let's do an experiment:

Spring beans 5.2.2 are used respectively 16. Release and spring beans 5.3 9 these two dependencies execute this code. The JVM parameter uses - XX:+UnlockExperimentalVMOptions -XX:+UseEpsilonGC -Xmx512m These parameters mean that epsilon GC is used, that is, when the heap memory is full, GC is not executed, and the OutofMemory exception is thrown directly and the program ends. The maximum heap memory is 512m. In this way, the program actually looks at different versions of BeanUtils before memory runs out How many times can copyproperties be executed.

So, to solve this problem, I asked the spring framework GitHub a question Issue.

Then, for projects that often use BeanUtils Replace the copyproperties with BeanCopier and encapsulate a simple class:

However, it should be noted that BeanCopier replaces BeanUtils The most direct problem with copyproperties is that those with different properties but different names cannot be copied. For example, one is int and the other is Integer. At the same time, there are some differences between deep copy and unit testing.

After modification, the problem is solved.