It is essentially a means of optimizing high-frequency code execution

For example, when the browser's resize, scroll, keypress, mousemove and other events are triggered, the callback function bound to the event will be called continuously, which greatly wastes resources and reduces the front-end performance

In order to optimize the experience, we need to limit the number of calls to such events. For this, we can reduce the call frequency by means of throttle and debounce

Imagine the elevator under the office building every day. The elevator completes a transportation, which is analogous to the execution and response of a function

Suppose that the elevator has two operation strategies debounce and throttle, and the timeout is set to 15 seconds, regardless of the capacity limit

After the first person in the elevator comes in, it will be delivered on time in 15 seconds. This is throttling

Wait 15 seconds after the first person in the elevator comes in. If someone comes in during the process, wait for 15 seconds for re timing until delivery starts after 15 seconds. This is anti shake

Time stamp and timer can be used to complete throttling

Using the timestamp writing method, the event will be executed immediately, and there is no way to execute again after stopping triggering

Using the timer writing method, it will be executed for the first time after delay milliseconds, and it will still be executed again after the second event stops triggering

The characteristics of timestamp writing method and timer writing method can be combined to achieve a more accurate throttling. The implementation is as follows

If anti chattering needs to be performed immediately, a third parameter can be added for judgment, and the implementation is as follows:

For example, the time frequency is set to 500ms. Within 2 seconds, the function and throttling are frequently triggered and executed every 500ms. Anti shake, no matter how many times the method is mobilized, it will only be executed once after 2s 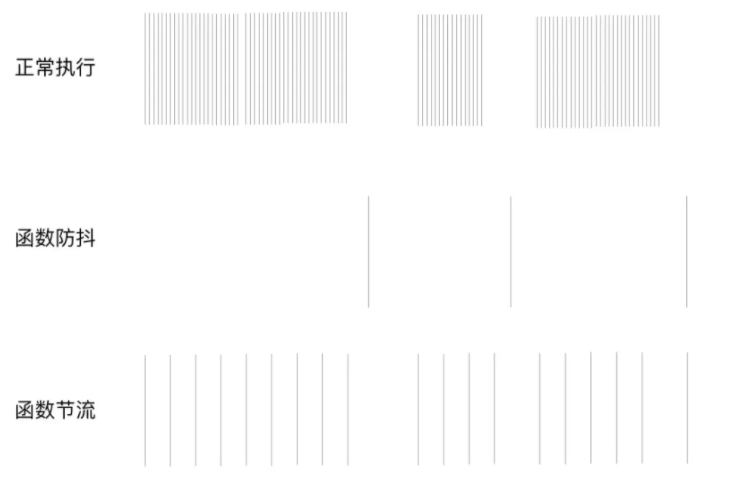 The scenarios in which only one callback needs to be triggered for continuous events are as follows:

The scenarios in which throttling performs a callback at intervals include: