The first part analyzes Java threads. Now let's analyze the java thread pool. Before analyzing the thread pool, let's think about whether the more threads we create, the better. Obviously not. Why should we use the thread pool? Let's take the following example

The above two codes are executed 100000 times to add random numbers to the set. The difference is that the first code creates threads to execute tasks every cycle, and the second code executes tasks through thread pool. That'll be faster. The answer is that the thread pool is much faster.
Why? In the previous article, it was mentioned that java thread creation is a heavyweight, involving from user state to kernel state. At the same time, too many threads lead to continuous context switching of cpu.
In the first code, 100000 objects and 100000 threads were created. The second code also creates 100000 objects, but only two threads are created. Why only two threads are created? We will analyze the newSingleThreadExecutor later.

So the thread pool performance must be good? Take a look at the example below

If you pay attention to Alibaba's development manual, you should know that the three thread pools created by Executors are not recommended. So why not recommend it? Let's analyze it one by one.
Let's first look at the meaning of several parameters of the process pool

The number of core threads in newCachedThreadPool is 0, the maximum number of threads is the maximum, and the survival time of threads in the thread pool is 60 seconds. The queue adopts synchronous queue.
According to the above case,
Firstly, there is no core thread in newCachedThreadPool, so when a task is received, it will be put into the synchronization queue (the synchronization queue is a typical production and consumption mode. When there is a task in the synchronization queue, you must consume this task before receiving other tasks). At this time, thread 1 will be created to execute task 1. When the task of the synchronization queue is consumed, it can receive the second task, and thread 2 will also be created to execute task 2. Then task 3 will be received again. At this time, if thread 1 finishes executing task 1 and the idle time is within 60 seconds (the survival time is 60 seconds), task 3 will be assigned to thread 1. At this time, thread 1 executes task 1 and task 3. This is thread reuse. If there is no idle thread when receiving task 3, thread 3 will be created to execute. This is the process of newCachedThreadPool thread pool.

The newsinglethreadexecution is similar to the newFixedThreadPool, except that the core thread and the maximum thread are both 1. When receiving a task, the core thread will execute task 1, then task 2 to task 100 will be put into the queue and wait for the core thread to execute. Therefore, in the above case, the execution efficiency is the slowest.

Secondly, these three thread pools have different problems. For example, the queue used by newSingleThreadExecutor and newFixedThreadPool is LinkedBlockingQueue unbounded queue.

You can see that the maximum capacity of LinkedBlockingQueue is the maximum of Integer, that is, when there are too many tasks, it may lead to OOM. However, the size of LinkedBlockingQueue can be specified, but the size is not specified at the bottom of newSingleThreadExecutor and newFixedThreadPool. Therefore, the two thread pools may be OOM. Even if they do not cause OOM, excessive capacity will lead to frequent GC.
For newCachedThreadPool, SynchronousQueue is used, which is a synchronous queue and will not cause OOM, but its maximum number of threads is integer MAX_ VALUE. If there is any problem caused by unlimited thread creation, CPU100%.
Therefore, each of the three thread pools has its own problems. However, for small and medium-sized projects, these problems will not be caused due to insufficient quantity. It doesn't matter to use it. Specific situation specific analysis.
So the above three thread pools are not recommended. What thread pool do you use? Custom thread pool is recommended

In the above case, none of the above three threads seems to be very satisfied. Either too many threads are created, or the queue space is too large, or the number of threads is too small. In this case, a custom thread pool is used.

Look at the execution results 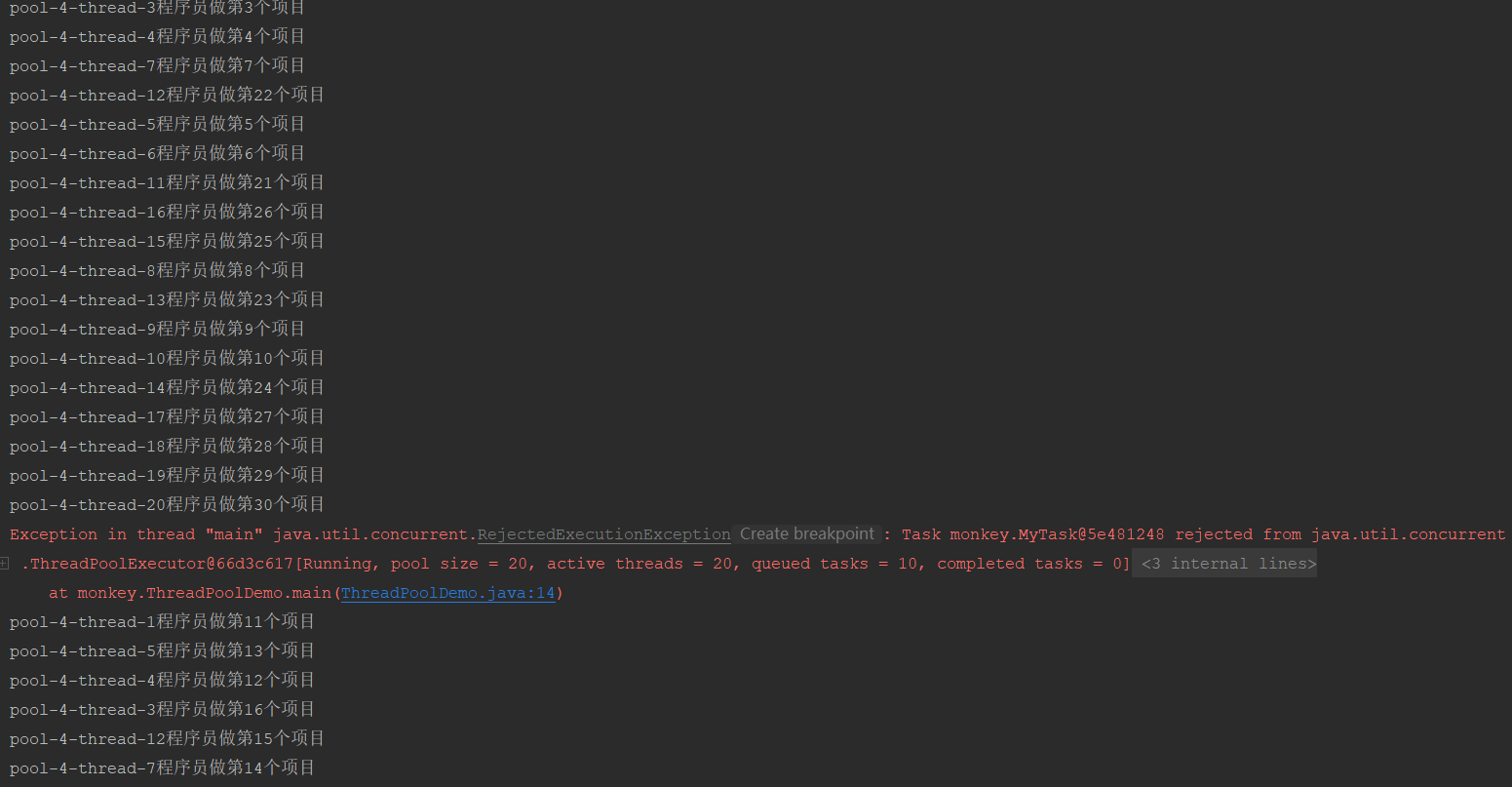 The exception thrown here is because the queue length is not enough, and the exception is thrown at the 31st task. Why is the exception thrown at the 31st task? Also, in terms of results, there is another problem, that is, the problem of order. From the above figure, tasks are performed from 1-10, then 20-30, and then 11-20. Our hypothetical execution order is 1-10, 10-20, 20-30. Why does this happen?
There are two knowledge points involved here: submission priority and execution priority. These are reflected in the source code.
Now start analyzing the source code to answer the above problems.

Let's take a look at the following class inheritance diagram: 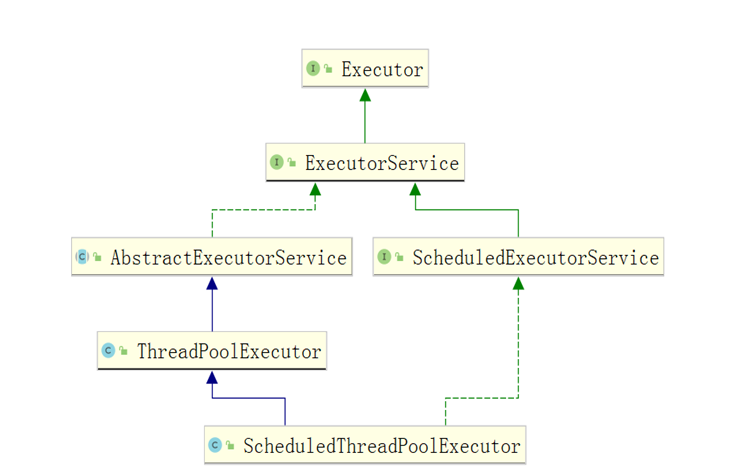 Executor has only one empty method of execute

ExecutorService inherits from Executor and provides the submit interface. ExecutorService is an interface, so the following methods are empty methods.
We often ask about the difference between the submit method and the execute method, which will also be mentioned later in the analysis. 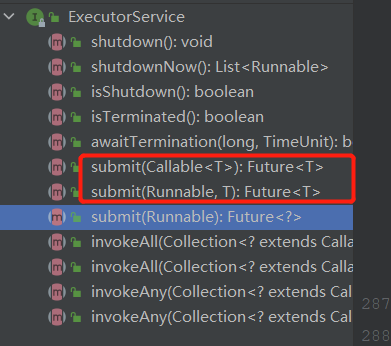 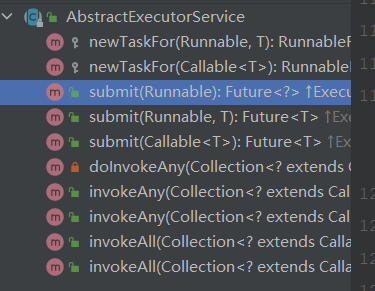 There are notes on the general process of addWorker. Before further analysis, let's solve some problems. First, what is this worker. Look at the source code of worker

The above is the more important source code display of Worker.
Solve another problem. Int c = CTL in both addWorker and execute methods get(); This C sometimes represents both the thread state and the number of threads. How to do this. Here is a simple explanation. See the definition of ThreadPoolExecutor of thread pool

Including COUNT_BITS is an int digit private static final int COUNT_BITS = Integer.SIZE - 3; //Integer.SIZE=32, so the actual COUNT_BITS = 29. The above five constants represent the status of the thread pool. In fact, they are represented by the upper three bits of 32 bits

After solving these two problems, let's analyze the addwork method through the above case.

Finally, start () is executed in addwork; Method, because the Worker implements the Runnable interface, actually start(); Method is to call the Worker's run method. This run method calls runWorker(this); So we have to look at the source code of runWorker

The source code meaning of runWorker is very simple. Get the current thread and task, and then execute it. No matter how, the task will be set to null in order to get the task from the queue next time. The point is (task! = null 𞓜 (task = getTask())= Null) as mentioned before, submit priority and execution priority. The execute code describes the submission priority. This line of code is the execution priority. First judge whether the worker object has a task and execute it if there is; Failed to pass getTask(); Get object from queue.
Another knowledge point is that beforeExecute and afterExecute are empty methods, which can be implemented by themselves if necessary.
getTask(); The source code of the method is not analyzed, that is, get the task from the queue. Then analyze the source code of processWorkerExit

The code of processWorkerExit is used to realize thread reuse, display the remove d worker in the source code, and then add worker (null, false); Then the created worker will get the task from the queue.
Here, the source code of thread pool is analyzed. 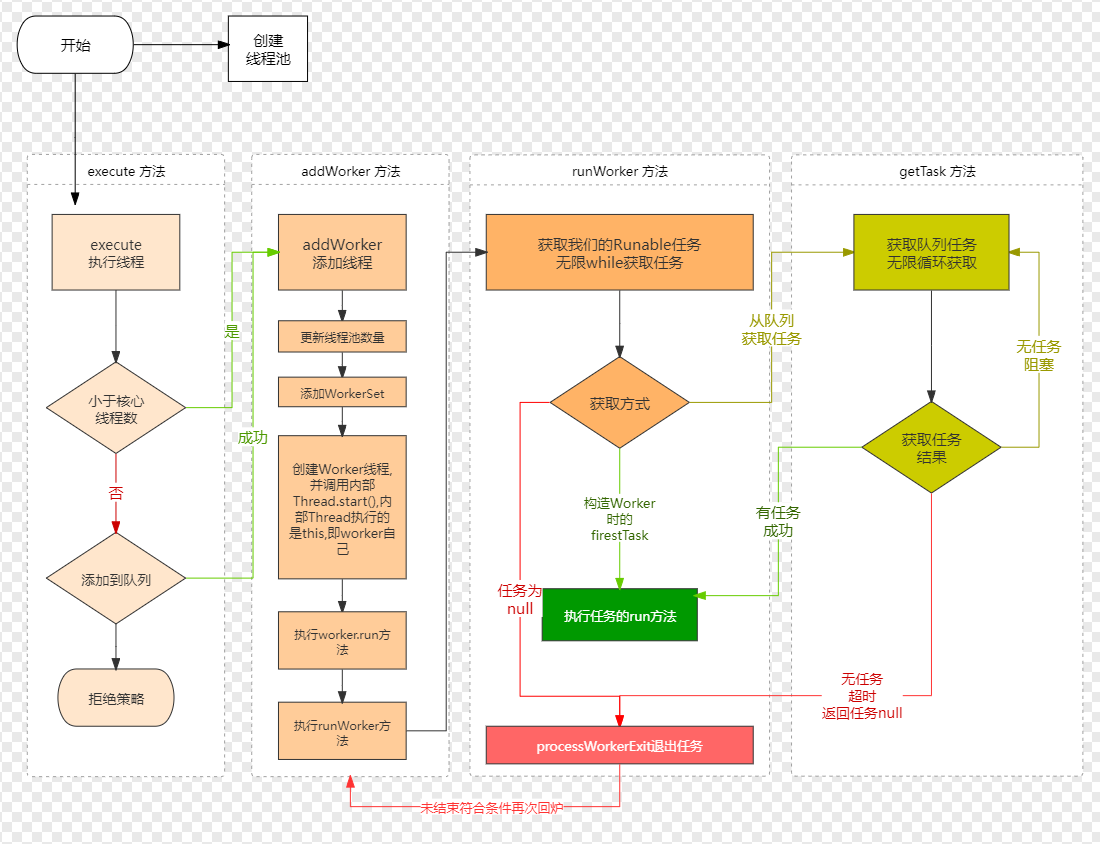