Idle to boring, learn C + +. (the foundation of C language is pretty good. I hope it will be easier to learn C + +)

The library introduced in C + + is different from C, so there is no need to add h. And generally add a C before the library name of C, such as stdio in C h. In C + +, it is cstdio.

This sentence is the visible range of the identifier. The objects provided by C + + libraries are stored in std, a standard namespace. If you want to use cin, cout, endl, etc., you must add this sentence.

When you first learn a language, the simplest example is to output hello world. Hahaha, so here you can also write a simple example with the input and output stream of C + +:

cout is used for output. After < < is the output content. You can put a variable and output the value of the variable; You can also put a string directly. If you want multiple outputs, you can use multiple < <. endl stands for line feed.

cin is used to obtain keyboard input. In the above code, the obtained number is stored in a and b, provided that a and b have been defined before. Enter two numbers on the keyboard, separated by "space" or "enter". When two more numbers are output, the program only takes the first two numbers.
Here, suppose I enter three numbers:

It can be seen that the program only takes the first two numbers.
But! I suddenly wonder if the number 8 that you input will still exist and be automatically read in the next time you use cin? Or after the execution of this sentence cin, the numbers not obtained later will be automatically cleared? So I tried to use cin again, so the program became:

Good guy, it's all executed directly and didn't give me a chance to enter the c value. It seems that the first two of the three numbers entered for the first time are given to a and b, and the last one is saved in the buffer of cin. When using cin next time, the data in the buffer will be automatically read in.
If you want to re-enter, do not enter the left value before. You need to empty the buffer first by adding two sentences before the input:

So you can enter the value of c: 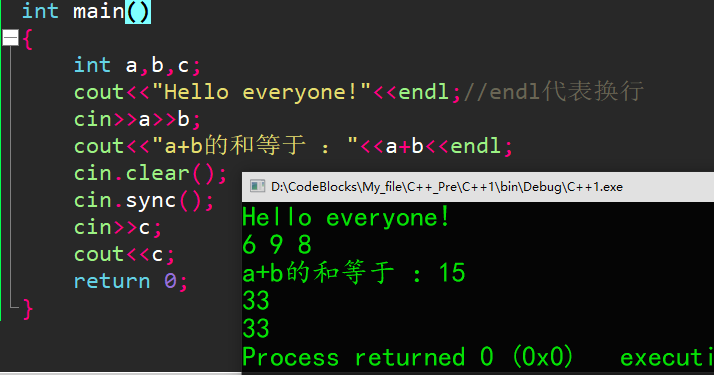 The most important thing in object-oriented programming is to understand "class" and "object".
What is a class? A class is a class. Category, classification and similarity... All similar and similar with the same characteristics can be classified into one category, and they can be abstracted into a class - class.

The structure in C language has the rudiment of object-oriented. Structures can encapsulate various types of data, such as:

The reason why it is a prototype is that a structure can only "encapsulate" attributes, not "encapsulate" methods (that is, functions). Class can. See the following example:

Class creates a class Dog, which does not occupy storage space;
In the main function, you need to create an object with a class (similar to creating a variable with a structure), namely dog1. This step is also called instantiation. It is said that the object is an instance of the class, which occupies memory space, and the object has all the properties and methods of the Dog class. Add "." through the object You can access the properties and methods of the object.
Operation results: