The idea of object-oriented (OO) is very important for software development. Its concept and application have even gone beyond program design and software development, and extended to fields such as database system, interactive interface, application structure, application platform, distributed system, network management structure, CAD technology, artificial intelligence and so on. Object oriented is a method of understanding and abstracting the real world. It is the product of the development of computer programming technology to a certain stage.

2, Start with a game

In a software Village
There is a senior "process oriented" programmer - old
And an "Object-Oriented" believer - ah yeah
At the same time, he was employed by a kicked shop

One day, the boss had a whim
Decided to let the two programmers have a competition
The winner will receive a limited amount of money
360 degree automatic massage chair programming
The game began

After a while, they both wrote almost the same code

The old man smiled when he saw the new demand 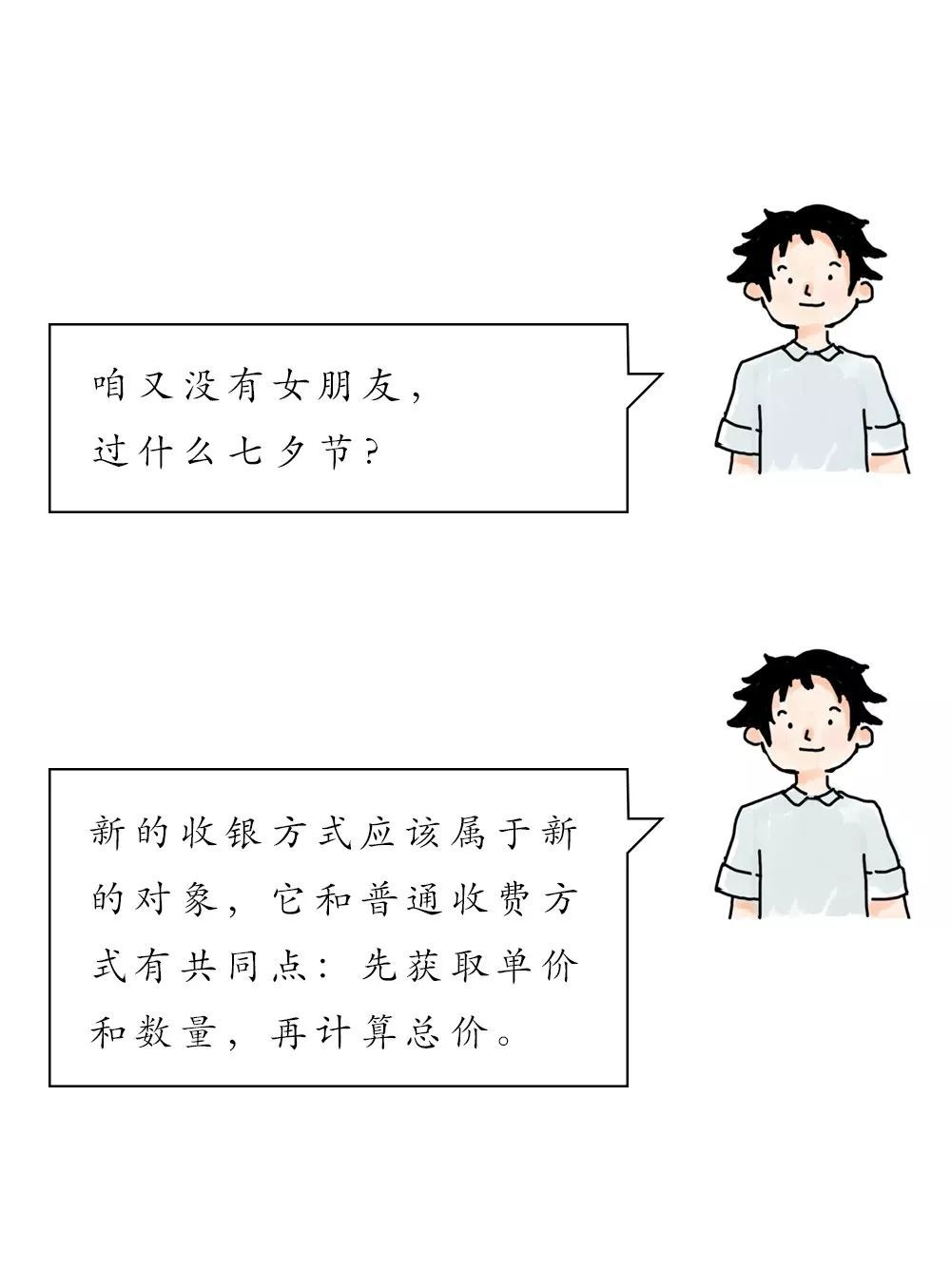 The common charging method is discount

The charging method of Tanabata Festival inherits this kind

Implement a 77% discount in the discount function 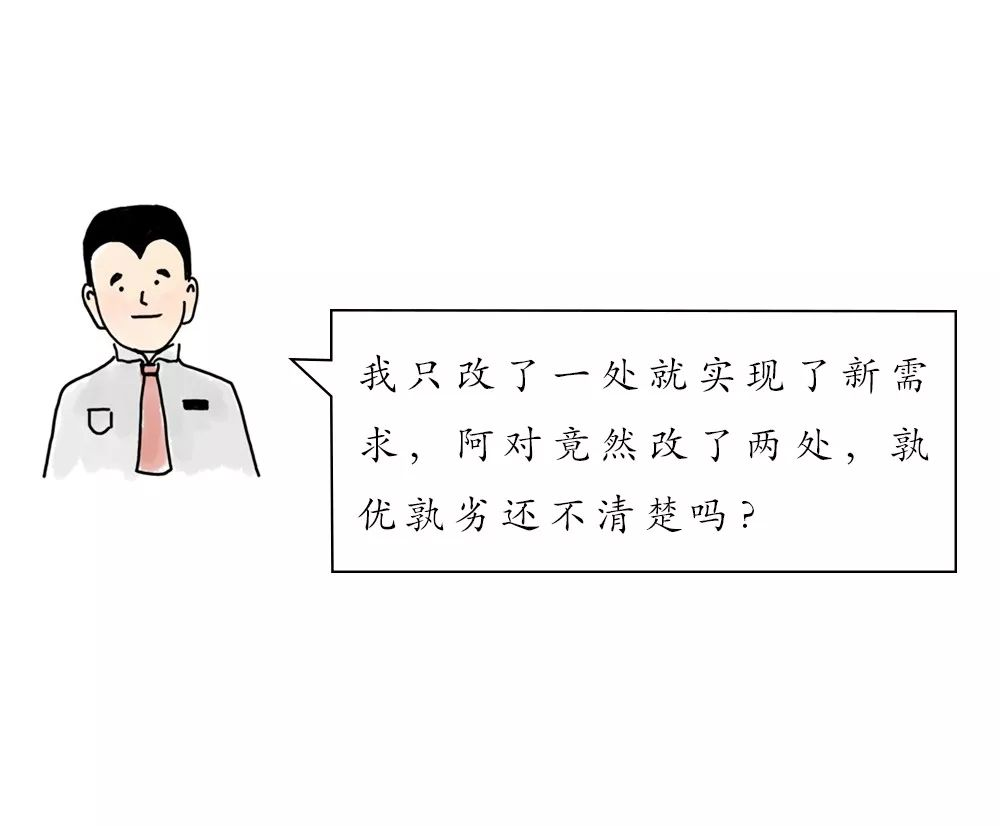 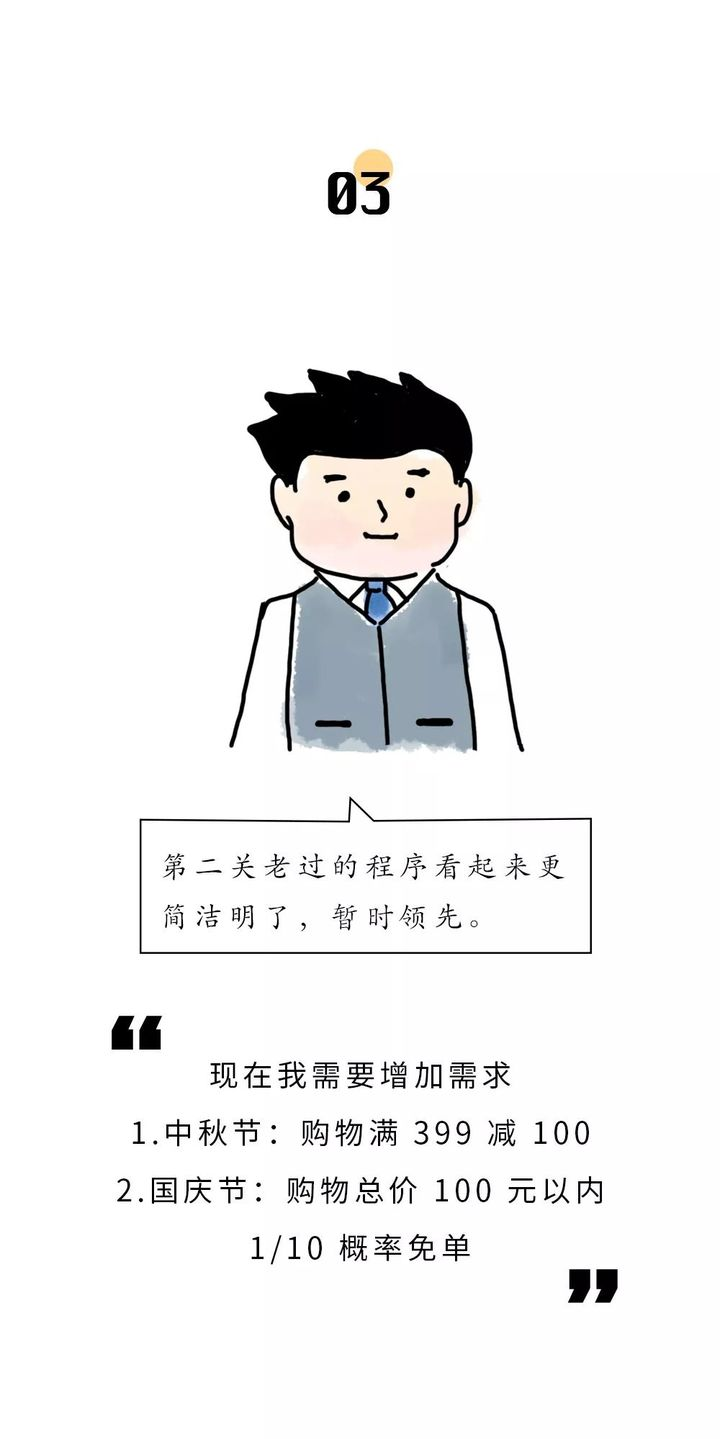 Hearing new needs, I was too old to make complaints about the new group. 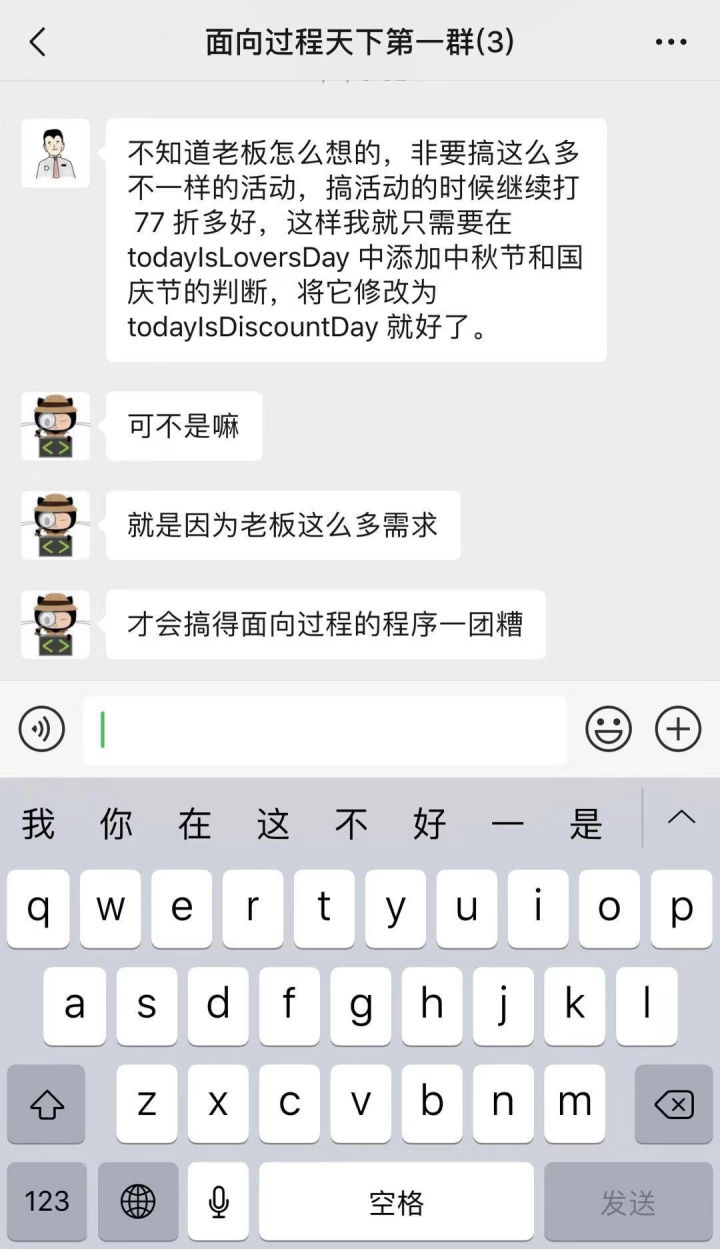 It looks more and more complicated
Bill class and getPrice method
The old man frowned. He knew that things were far from over
Mid Autumn Festival and National Day
He also needs to be in this complex class
Delete the discount method
God knows the boss will mention it again
What is the demand for unrestrained

Whether adding or deleting code, it is not pleasant to make changes in this too long class. In order to find the location that needs to be modified in a long function, "process oriented" makes Laoguo have to browse a large number of code that has nothing to do with the modification. After careful modification, he has to repeatedly confirm that it will not affect other parts of the class.

When a new demand is received
First, the Mid Autumn Festival payment category was added

One of ah's favorite things about "Object-Oriented" is 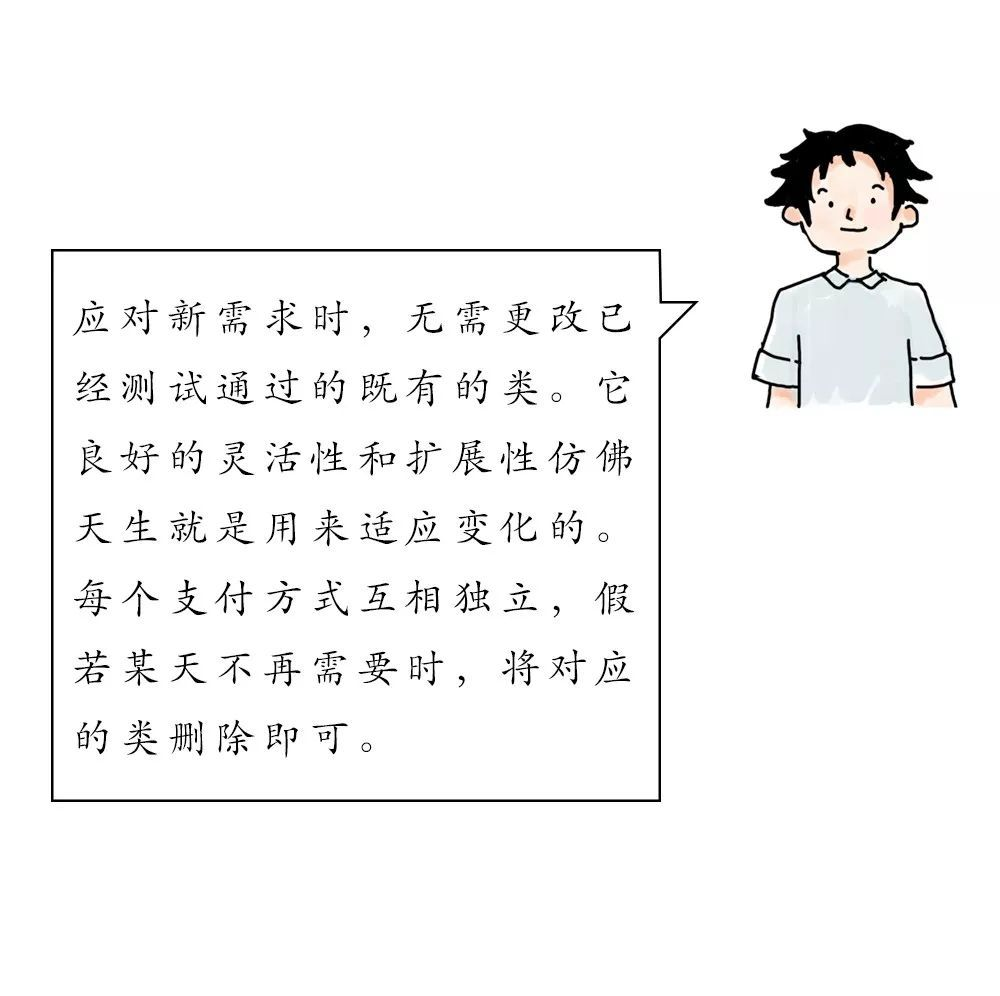 I have good news to tell you!
When the boss said this happily
Lao Guo and ah Dui both showed frightened expressions
This sentence often means changing requirements

The revision took a long time to complete

A pair opened the LoversDayBill class
Amend it as follows

The game was so anxious
Who won the prize last?

The third contestant is the stupid son of the boss
He can't write programs at all
But he uses Ctrl+C, Ctrl+V
Copied ah pair's code

In the interview, the common inspection points of object-oriented are three basic characteristics: encapsulation, inheritance and polymorphism.

Encapsulation is to encapsulate objective things into abstract classes, and classes can only allow their own data and methods to be operated by trusted classes or objects, and hide information from untrusted ones.

Inheritance refers to the ability to use all the functions of an existing class and extend them without rewriting the original class. The new class created by inheritance is called "subclass" or "derived class", and the inherited class is called "base class", "parent class" or "superclass".
Inheritance can be realized through inheritance and composition.

Polymorphism is a technique that allows you to set a parent object equal to one or more of its children. After assignment, the parent object can operate in different ways according to the characteristics of the child object currently assigned to it. Simply put, it is allowed to assign a pointer of a subclass type to a pointer of a parent type.
There are two ways to realize polymorphism, covering and overloading. The difference between the two is that override is determined at run time and overload is determined at compile time. And the mechanisms of coverage and overloading are different. For example, in Java, the signature of an overloaded method must be different from that of the original method, but it must be the same for the overlay signature.

My understanding of object-oriented: object-oriented programming makes each class do only one thing. Process oriented makes a class more and more versatile and does everything like a housekeeper. Object oriented is like hiring a group of employees. Everyone does a small thing, performs their own duties, and finally cooperates and wins!

Finally, what are the benefits of object orientation?

"During the Three Kingdoms period, Cao Cao led millions of troops to attack Soochow. The troops were stationed in Chibi on the Yangtze River, and the military ships were connected. Seeing that Soochow would be destroyed and the world would be unified, Cao Cao was happy, so he gave a big banquet to all the civil and military forces. During the banquet, Cao Cao was full of poetry and chanted, 'drinking and singing is really cool...' all the civil and military forces shouted together: 'the prime minister is a good poem!' so a minister quickly ordered the seal Brush craftsmen for engraving and printing, so as to spread all over the world. "

"When the sample came out and showed it to Cao Cao, Cao Cao felt that it was inappropriate and said: 'drinking and singing is too vulgar. It should be changed to' singing to wine 'better!' so the minister ordered the craftsman to do it again. The craftsman saw that the engraving work all night was completely wasted, and he kept complaining. He had to do it."

"The sample came out again and asked Cao Cao to have a look. Cao Cao thought it was still bad. He said: 'life is so cool' it's too direct. You should change the language to be artistic conception. Therefore, it should be changed to 'singing to wine, life is geometric...' when the minister told the craftsman, the craftsman fainted..."

Big bird: "little dish, what's the problem?"
Xiao Cai: "is it because movable type printing was not invented during the Three Kingdoms period, so when you want to change the characters, you must re engrave the whole stereotype."
Big bird: "well said! If you have movable type printing, you only need to change four words, and the rest of the work has not been done in vain. Isn't it wonderful.
1, To change, just change the word to be changed, which is maintainable;
2, These words are not useless this time. They can be reused in later printing;
3, If you want to add words to this poem, you just need to add another engraved word, which is extensible;
4, In fact, the arrangement of characters may be vertical or horizontal. At this time, only moving the movable type can meet the arrangement requirements, which is a good flexibility. "

"Before the advent of movable type printing, the above four characteristics could not be met. To modify, you must engrave again, add words, engrave again, rearrange and engrave again. After printing this book, this edition has no reuse value."

Corresponding to object-oriented, that is, process oriented, which existed in earlier versions of C language.

The process oriented to process development is a bit similar to the tree calling function. The main program of the root node of the tree calls the function layer by layer.

The difference between object-oriented and process oriented is:

Object oriented is based on elements and things as the main body. As long as you can abstract something into an object, it can be used as the carrier of your piece of code.

First of all, the reusability is excellent. If you want to write repetitive logic, just use the same class directly.

Secondly, the coupling is very low. When modifying the logic, you only need to modify the content in the corresponding interface.
At the same time, the code logic is better understood and maintained.