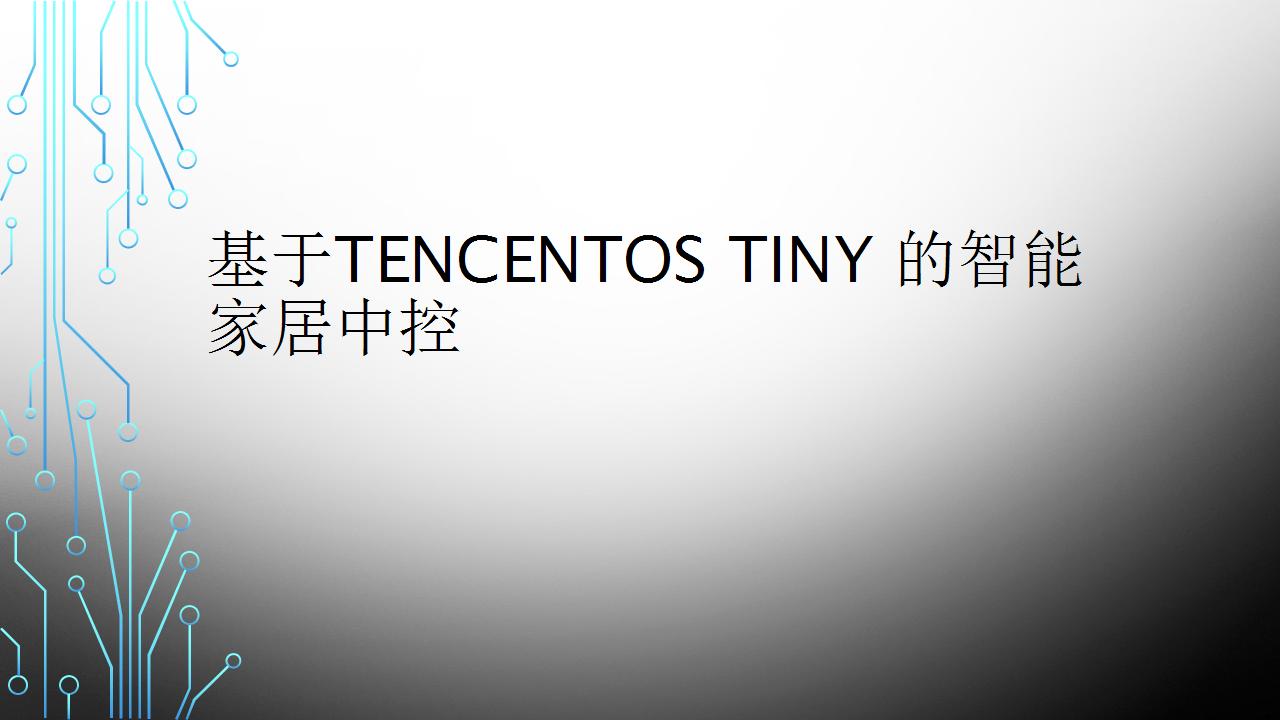 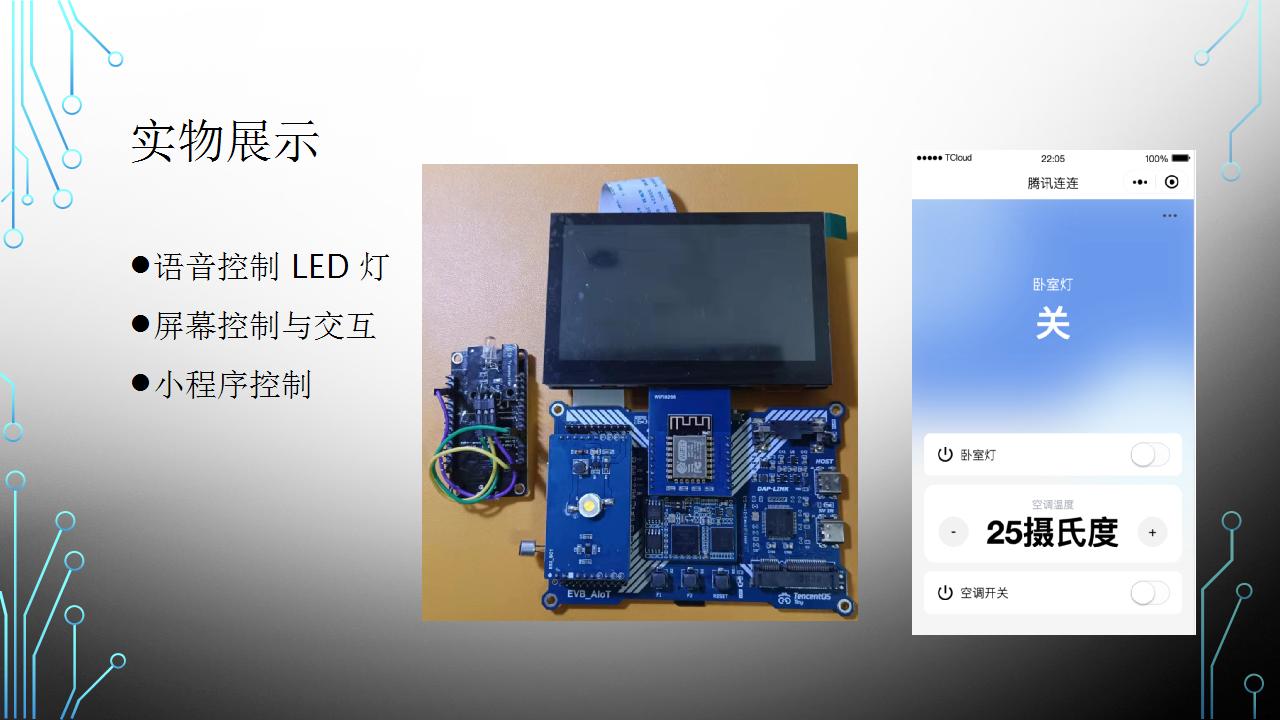 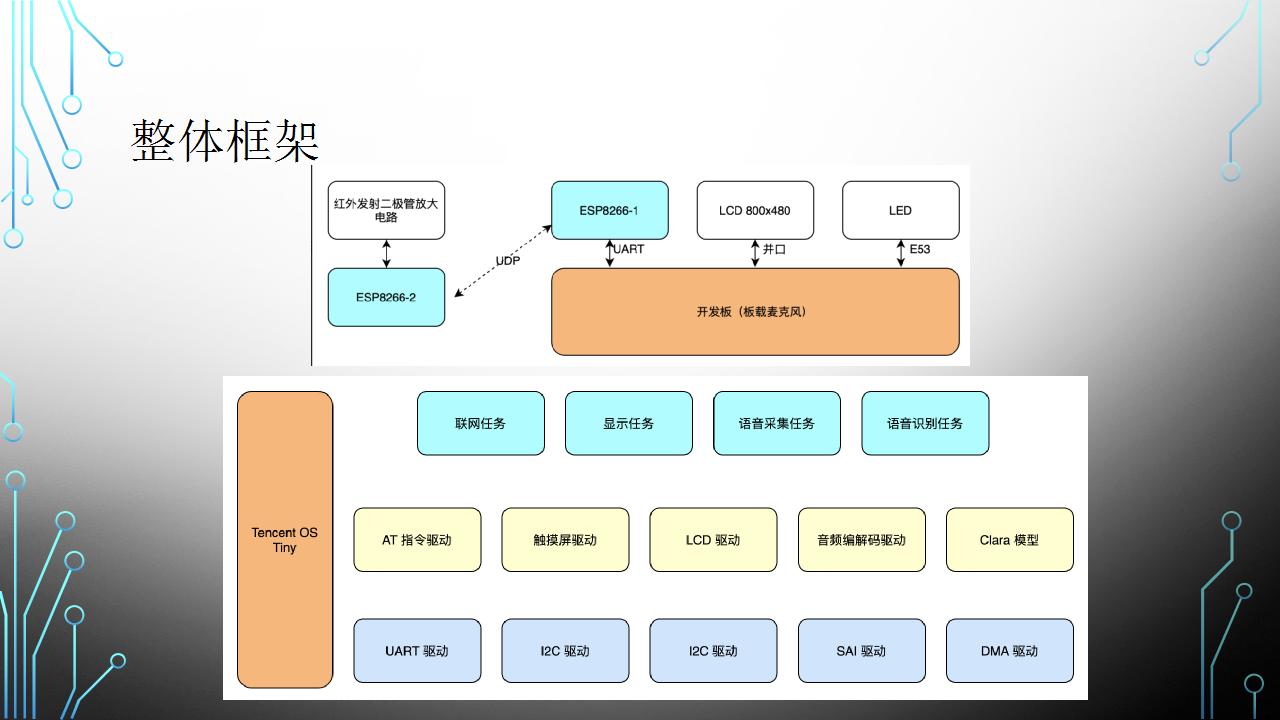 With the continuous improvement of science and technology and living standards, smart home products are constantly entering daily life. Smart home can make home appliances smarter and make life more comfortable. Smart home is also the product of the deepening development of the Internet. The Internet connects people. After further development, it forms the Internet of things, connecting people and things, things and things.

Considering that lamps and air conditioners are the most widely used household appliances, we can start with these two items to make a set of smart home system.

Design and make a set of smart home system, which can complete the control of lamps and air conditioning.

In terms of hardware, the RT1062 development board is used as the central control, an 800x480 screen is used to provide human-computer interaction, the LED lamp extension of E53 interface is used as a lamp, and the esp8266 module is used to provide networking capability for RT1062. In addition, esp8266 and infrared emission module are used as independent infrared remote controller. The overall hardware connection is shown in the figure below:

TencentOS Tiny is used in the software to provide the connection between task scheduling ability and mqtt, and Tencent cloud IoT development platform is used in the cloud to process data. The applet end is bound with Tencent serial applet to provide remote control capability.

The infrared remote control capability is provided by a separate esp8266 module. After receiving the UDP data packet in the LAN, the module parses it into the control instruction in json format, and then converts it into infrared coded data. Finally, the data is transmitted to the air conditioner through the infrared transmitting module.

The overall software framework is shown in the figure below: 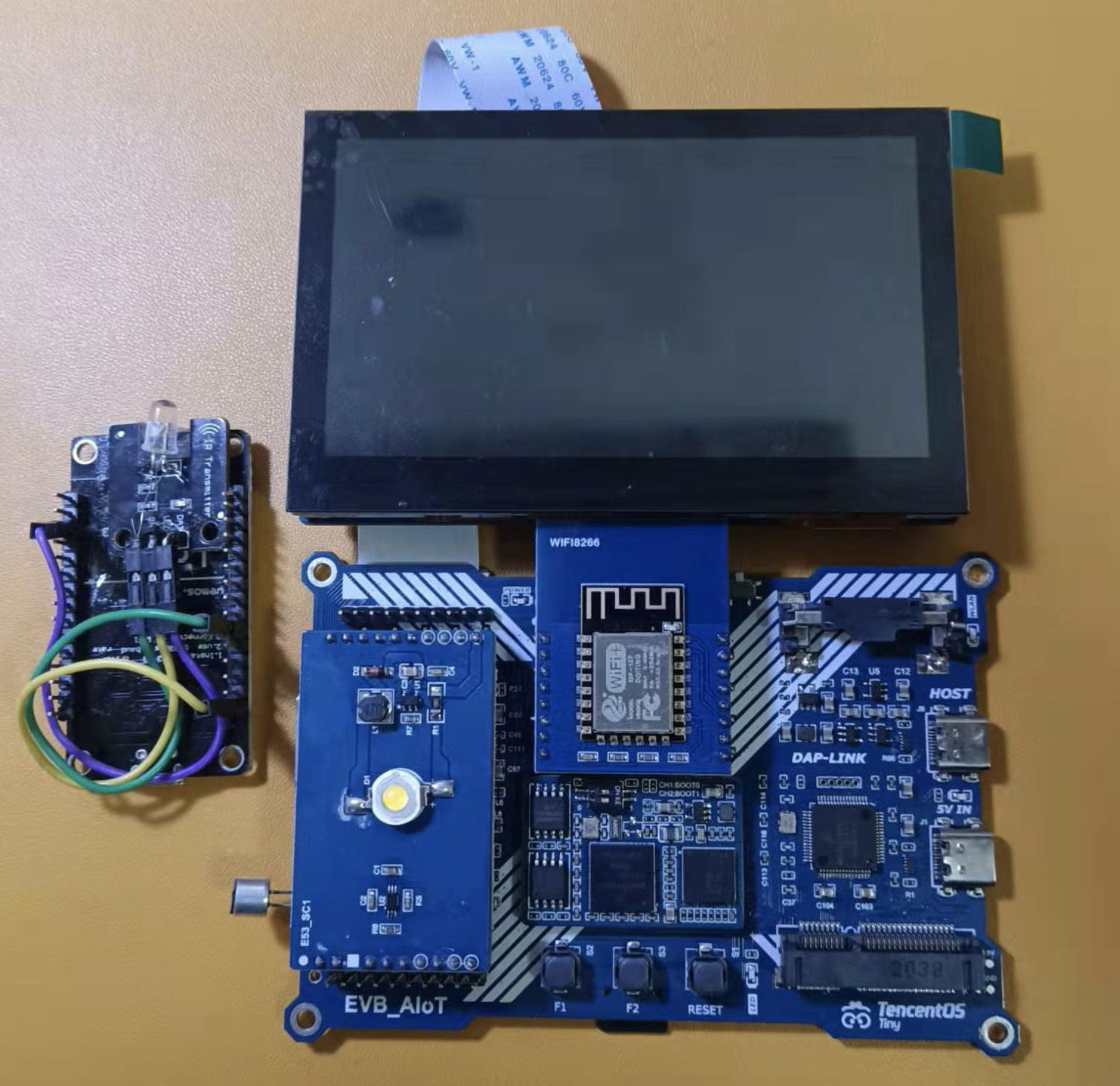 Basic driver refers to the driver changed with the development board routine, which is not within the scope of this project, but it is more important.

The second is to use external SDRAM. Because the project requires more external resources, the development board itself provides 16MB SDRAM, which can be used for display cache, etc. The driver of this part is written into the single chip microcomputer through the OCD module of RT1602. Without business code, it can ensure that the external SDRAM can be available after startup.

Then LCD driver. Using the enhanced LCD interface peripheral eLCDIF of RT1602 and the driver in the library function, combined with the available external SDRAM as the display memory, it is convenient to drive the 800x480 LCD of the development board.

Finally, voice driven. After the short-circuit problem of the development board mic is solved, the routine can be used to initialize the audio codec chip and complete the audio input and output.

The development board has its own LCD driver, but if you want to do human-computer interaction, you still need to transplant the corresponding GUI driver. This project uses lvgl as the GUI drawing layer, and this part of the code is obtained from the components of TencentOS Tiny.

An important part of human-computer interaction is to process input. The screen of the development board contains a touch screen, but it does not adapt to the touch screen driver.

The chip of the touch screen is GT911, which supports up to 5 touch points and is connected with the development board through I2C interface. In terms of software, consider using software to simulate I2C to quickly realize the drive.

First, transplant the driver of software I2C. Complete the control of GPIO according to the sequence diagram of I2C, and expose the following APIs:

The second is to transplant the driver of GT911. The screen has been written with configuration parameters at the factory, so there is no need to make complex configuration, and it can be used almost after power on.

The interrupt processing code is as follows:

The code for reading keys is as follows:

Then on touchpad_read out the corresponding coordinates in read

Will LV_ port_ disp_ template. Copy C to lv_port_disp.c. And call the lcd driver. The code is as follows:

The air conditioner used for the test is a Midea brand, and its control mode is somewhat special. First look at the infrared data coding. 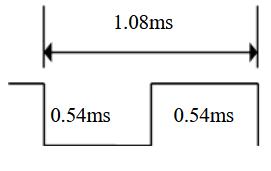 During normal wind speed, temperature and mode control, the values of B and C are set according to the following figure: 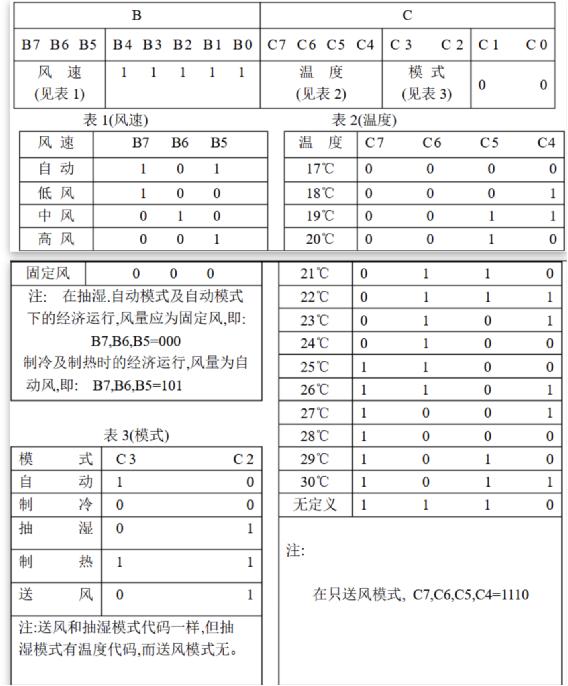 The infrared data array here is an important concept, which records the data composition of an infrared data frame. Every two elements of the array form a group, indicating the duration of low level and high level. The time unit is microseconds. An example is as follows:

The infrared remote controller is implemented on another piece of esp8266. The implementation scheme adopts IRbaby firmware https://github.com/Caffreyfans/IRbaby . Because Midea air conditioner needs special infrared data, IRbaby is finally customized. After understanding the implementation, you can see in Src / irbabyir It is convenient to customize in CPP. Comment out ir_decode function, and then write generate_midea_ac function replaces its function to get the infrared data array.

In terms of application, it is divided into four tasks: networking task, display task, audio acquisition task and audio recognition task. The code is as follows:

The esp8266 at driver has been completed by TencentOS Tiny. We only need to access Tencent cloud IoT development platform step by step. The main workflow is as follows

The main flow of callback function is as follows:

In the above, the underlying control logic of Midea air conditioner has been solved, and the application part mainly solves the communication between user interface and applet and intelligent central control.

The processing flow of the callback function is as follows:

This task is used to drive the normal display of lvgl and draw the switch control and spinner control at the same time. 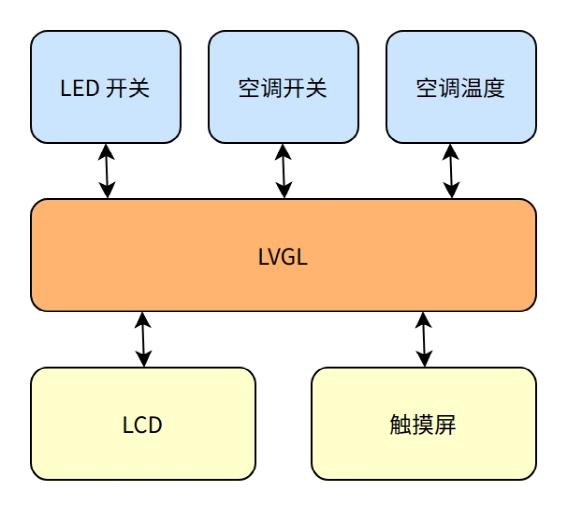 The key codes are as follows:

The actual display effect is shown in the figure below: 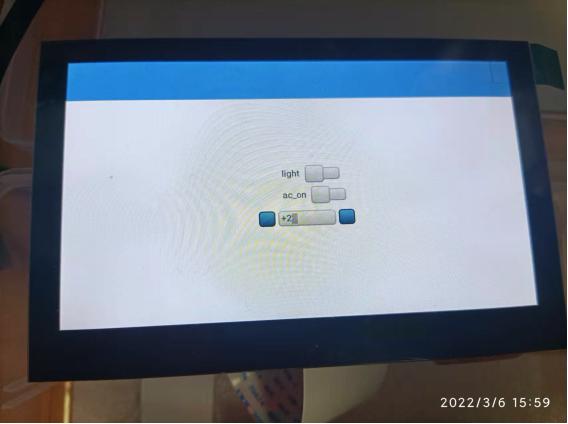 Lvgl needs to execute LV on a regular basis_ task_ Handler function and put it into the display task.

At the same time, lvgl also requires the implementation of LV on a regular basis_ tick_ Inc function and put it into SysTick_Handler.

The purpose of audio acquisition is to receive data frame by frame from the codec chip, and notify the recognition task for recognition after processing.

The trained Clara speech recognition model is used for audio recognition. If the corresponding speech is matched, the keyword id will be given. According to the keyword id, you can control the light on and off.