My girlfriend learned this set of performance optimization methodology, and the leadership year-end bonus was given to her for 6 months

Hello, everyone, let me introduce myself first. I'm the code on the code. You can call me brother code. I'm also the most ordinary student who graduated from an ordinary undergraduate course. I believe that most programmers or those who want to engage in the programmer industry are children of ordinary families, so I also rely on my own efforts, from graduation to entry into a traditional enterprise to job hopping, Now I work in an Internet industry giant company. I hope I can help you through my own sharing

Take you to the springCloud column

Column on taking you to distributed systems

Take you to learn the source code of springboot

"Take you to learn netty principle and actual combat column"

Take you to Elasticsearch column

Take you to learn mysql column

Take you to big data column

Since it's a positioning problem, we definitely need tools. Let's first understand what tools we need to help locate the problem.

top command is one of the most commonly used Linux commands. It can display the CPU utilization, memory utilization and other system information of the currently executing process in real time. top -Hp pid ， you can view the system resource usage of threads.

vmstat is a virtual memory detection tool that specifies the cycle and collection times. It can count the usage of memory, CPU and swap. It also has an important common function to observe the context switching of processes. The field description is as follows:

Pidstat is a component of Sysstat and a powerful performance monitoring tool. The top and vmstat commands are used to monitor the memory, CPU and I/O usage of the process, while the pidstat command can detect the thread level. The thread switching field of pidstat command is described as follows:

Jstack is a JDK tool command. It is a thread stack analysis tool. The most commonly used function is to use the {jstack pid} command to view the stack information of threads. It is also often used to eliminate deadlocks.

Jmap is also a JDK tool command. It can view the initialization information of heap memory and the usage of heap memory. It can also generate dump files for detailed analysis. View heap memory command jmap -heap pid.

MAT(Memory Analyzer Tool) is a plug-in of eclipse (MAT can also be used alone). When analyzing dump files with large memory, it can intuitively see the memory size occupied by each object in the heap space, the number of class instances, the object reference relationship, the use of OQL object query, and the relevant information of object GC Roots.

There is also such a plug-in in idea, jpprofiler.

It is still relatively simple to simulate the full CPU. You can directly write an dead cycle to calculate the CPU consumption.

Request the interface address to test curl localhost:8080/cpu/loop. It is found that the CPU soars to 100% immediately

We add a heap memory size limit to startup, and set the output stack snapshot and log when memory overflows.

After the startup is successful, we execute the loop 100 times, for i in {1..500}; do curl localhost:8080/memory/leak;done, the system has returned 500 errors before the execution is completed. The following exceptions occurred when viewing the system log:

Let's use the jstat -gc pid command to see the GC situation of the program.

Obviously, the memory overflowed, and the heap memory did not release the available memory after 45 times of Full Gc, which indicates that the objects in the current heap memory are alive, with GC Roots references, and cannot be recycled. What causes memory overflow? Do I just need to increase the memory? If it is an ordinary memory overflow, it may be OK to expand the memory, but if it is a memory leak, the expanded memory will be filled in a short time, so we still need to determine whether it is a memory leak. We saved the heap Dump file before. At this time, we use our MAT tool to analyze it. Select Leak Suspects Report as the import tool, and the tool will directly list the problem report for you. 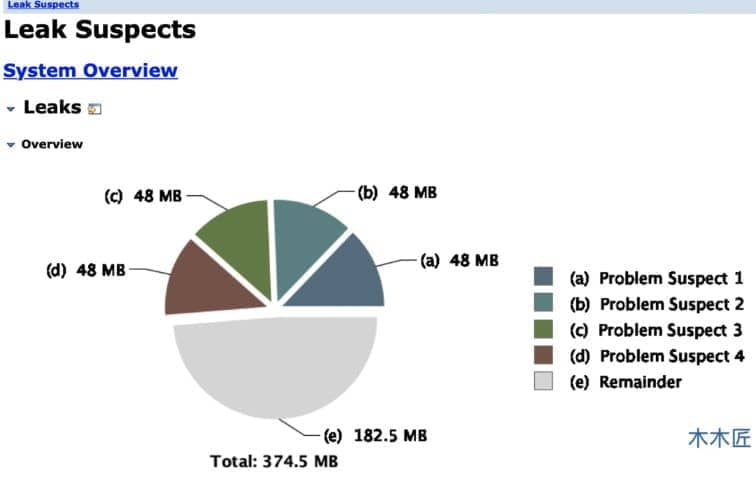 Four suspected memory leaks have been listed here. Let's click one of them to see the details.

It has been pointed out here that the memory occupied by threads is nearly 50M, and the occupied object is ThreadLocal. If you want to analyze it manually in detail, you can click Histogram to see who is the largest object occupied, and then analyze its reference relationship to determine who caused the memory overflow. 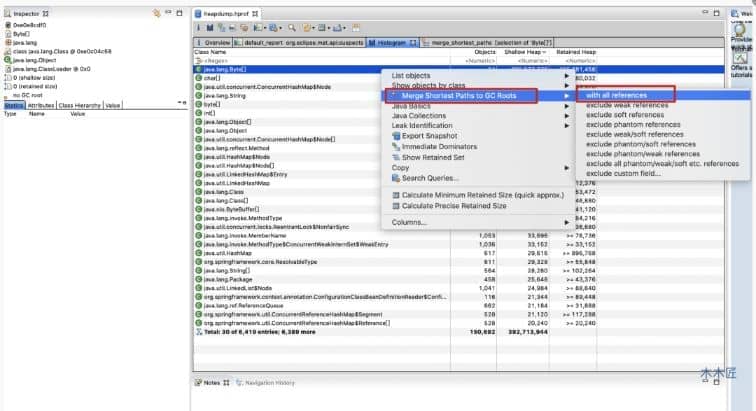 It is found in the figure above that the object occupying the most memory is a Byte array. Let's see if it is not recycled because it is referenced by the GC Root. According to the operation instructions in the red box above, the results are as follows:

Deadlock will lead to exhaustion of thread resources and occupation of memory. The performance is that the memory occupation increases and the CPU does not necessarily soar (depending on the scenario). If it is a direct new thread, the JVM memory will be exhausted and the error of unable to create a thread will be reported. This also reflects the benefits of using thread pool.

We repeatedly requested the interface for 2000 times and found that a log error occurred in the system after a while. The thread pool and queue were full. Because I chose the policy of rejecting when the queue was full, the system threw an exception directly.

Here, I create multiple threads to perform the basic atomic + 1 operation, and then give up the CPU resources. In theory, the CPU will schedule other threads. We ask the interface to create 100 threads to see the effect. curl localhost:8080/thread/swap?num=100. Every 10 seconds after the thread switches to print, the result is as follows:

Here we focus on four indicators, R, CS, US and sy.

r=100, indicating that the number of waiting processes is 100 and the thread is blocked.

us=14, indicating that the user mode takes up 14% of the CPU time slice to process logic.

sy=86, indicating that the kernel state occupies 86% of the CPU. Obviously, context switching is done here.

We check the process and thread CPU through the top command and top -Hp pid. We find that the Java process is full of CPU, but the thread CPU usage is very average. No thread is full of CPU.

Combined with the above, the user state CPU is only used by 14%, and the kernel state CPU is occupied by 86%. It can be basically judged that the performance problem is caused by the thread context switching of Java program.

We use the pidstat command to see the thread switching data inside the Java process. Execute pidstat -p 87093 -w 1 10. The collected data are as follows:

According to the information collected above, we know that the java thread switches about 15 times per second. Under normal circumstances, it should be a single digit or decimal. Combined with this information, we can conclude that Java threads are opened too much, resulting in frequent context switching, which affects the overall performance.

Why is the context switching of the system more than 8 million per second, while a thread in the Java process is switched only about 15 times?

System context switching can be divided into three situations:

1. Multitasking: in a multitasking environment, when one process is switched out of the CPU and another process is running, context switching will occur.

2. Interrupt handling: when an interrupt occurs, the hardware will switch the context. In the vmstat command is in

3. User and kernel mode switching: when the operating system needs to switch between user mode and kernel mode, context switching is required, such as system function call.

When will the process be scheduled to run on the CPU?

Combined with our previous content analysis, the blocked ready queue is about 100, while our CPU has only 4 cores. The context switching caused by this part may be quite high. In addition, the number of interrupts is about 4000 and the function calls of the system, it is not surprising that the context switching of the whole system is 8 million. The thread switching in Java is only 15 times because the thread uses thread Yield () to give up CPU resources, but the CPU may continue to schedule the thread. At this time, there is no switching between threads, which is why the switching times of an internal thread are not very large.

This paper simulates common performance problem scenarios and analyzes how to locate CPU100%, memory leakage, deadlock and frequent thread switching. To analyze problems, we need to do two things well. First, master the basic principles. Second, use good tools. This article also lists common tools and commands for analyzing problems, hoping to help you solve problems. Of course, the real online environment may be very complex, not as simple as the simulated environment, but the principle is the same, and the performance of the problem is similar. We focus on the principle, learn and use it flexibly, and believe that complex online problems can also be solved smoothly.

You must remember to praise, collect and pay attention

In case you can't find it next time

Your support is the driving force of my continuous creation!!!