A * algorithm for path planning

A * algorithm for path planning

A * (read: A Star) algorithm is a very common path finding and graph traversal algorithm. It has better performance and accuracy. While explaining the algorithm, this paper will also provide the code implementation of Python language, and dynamically display the operation process of the algorithm with the help of matplotlib library.

A * algorithm was originally published in 1968 by Peter Hart, Nils Nilsson and Bertram Raphael of Stanford Research Institute. It can be considered as an extension of Dijkstra algorithm.

Due to the guidance of heuristic function, A * algorithm usually has better performance.

In order to better understand the A * algorithm, let's start with the Breadth First algorithm.

As its name indicates, breadth first search takes breadth as its priority.

This algorithm expands outward like Flood fill. The process of the algorithm is shown in the following figure:

In the above dynamic graph, the algorithm traverses all the points in the graph, which is usually unnecessary. For the problem with a clear end point, the algorithm can be terminated in advance once it reaches the end point. The following figure compares this situation: 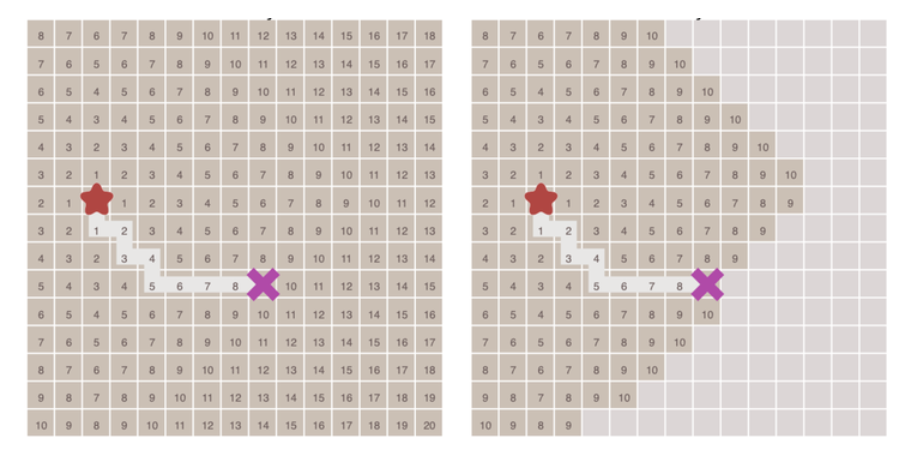 In the process of executing the algorithm, each point needs to record the position of the previous point reaching the point - which can be called the parent node. After this, once you reach the end point, you can start from the end point, and then find the starting point in the order of the parent nodes, thus forming a path.

Dijkstra algorithm is used to find the shortest path between nodes in the graph.

In Dijkstra algorithm, the total moving cost of each node from the starting point needs to be calculated. At the same time, a priority queue structure is also needed. All nodes to be traversed are placed in the priority queue and sorted according to the cost.

In the process of running the algorithm, the node with the lowest cost is selected from the priority queue every time as the next traversal node. Until we reach the end.

When the graph is a grid graph and the moving cost between each node is equal, the Dijkstra algorithm will become the same as the breadth first algorithm.

In some cases, if we can calculate the distance from each node to the end point in advance, we can use this information to reach the end point faster.

The principle is also very simple. Similar to Dijkstra algorithm, we also use a priority queue, but at this time, the distance from each node to the end point is taken as the priority, and the node with the lowest moving cost to the end point (closest to the end point) is always selected as the next traversal node. This algorithm is called Best First algorithm.

This can greatly speed up the path search, as shown in the following figure:

But will this algorithm have any disadvantages? The answer is yes.

Because if there are obstacles between the start point and the end point, the best first algorithm may not find the shortest path. The following figure describes this situation.

After comparing the above algorithms, we can finally explain the focus of this paper: A * algorithm.

In the following description, we will see that the A * algorithm actually integrates the characteristics of these algorithms.

A * algorithm calculates the priority of each node through the following function.

A * algorithm selects from the priority queue every time during operation f ( n ) f(n) The node with the lowest f(n) value (the highest priority) is the next node to be traversed.
In addition, the A * algorithm uses two sets to represent the nodes to be traversed and the nodes that have been traversed, which is usually called open_set and close_set.

The complete A * algorithm is described as follows:

As mentioned above, the heuristic function will affect the behavior of A * algorithm.

From the above information, we can know that we can control the speed and accuracy of the algorithm by adjusting the heuristic function. Because in some cases, we may not necessarily need the shortest path, but hope to find A path as soon as possible. This is also where the A * algorithm is more flexible.

For graphs in grid form, the following heuristic functions can be used:

If only four directions are allowed to move up, down, left and right in the graph, the Manhattan distance can be used for the heuristic function, and its calculation method is shown in the following figure:

The function for calculating Manhattan distance is as follows. D here refers to the movement cost between two adjacent nodes, which is usually a fixed constant.

If oblique movement towards adjacent nodes is allowed in the graph, the heuristic function can use diagonal distance. Its calculation method is as follows:

The function for calculating the diagonal distance is as follows. D2 here refers to the moving cost between two adjacent nodes obliquely. If all nodes are square, the value is 2 ∗ D \sqrt{2} * D 2 ​∗D.

If movement in any direction is allowed in the drawing, Euclidean distances can be used.

The source code of the algorithm can be downloaded from github: Paul quei / a-star-algorithm.

Our algorithm demonstrates the solution process of finding the end point from the starting point on a two-dimensional grid graph.

First, we create a very simple class to describe the points in the diagram. The relevant codes are as follows:

Next, we implement a class that describes the map structure. To simplify the description of the algorithm:

In order to make the algorithm more interesting, we set an obstacle in the middle of the map, and the map will also contain some random obstacles. The code of this class is as follows:

With the basic data structure, we can start to implement the algorithm body.

Here we use a class to encapsulate our algorithm.

First, implement some basic functions required by the algorithm, which are as follows:

With the above auxiliary functions, you can start to implement the main logic of the algorithm. The relevant codes are as follows:

This code should not need much explanation. It is implemented according to the previous algorithm logic. In order to show the results, we will save the state into pictures with the help of matplotlib library at each step of the algorithm.

The above function calls several other functions, and the code is as follows:

These three functions should be easy to understand:

Finally, the entry logic of the program. Use the class written above to find the path:

This code is described as follows: 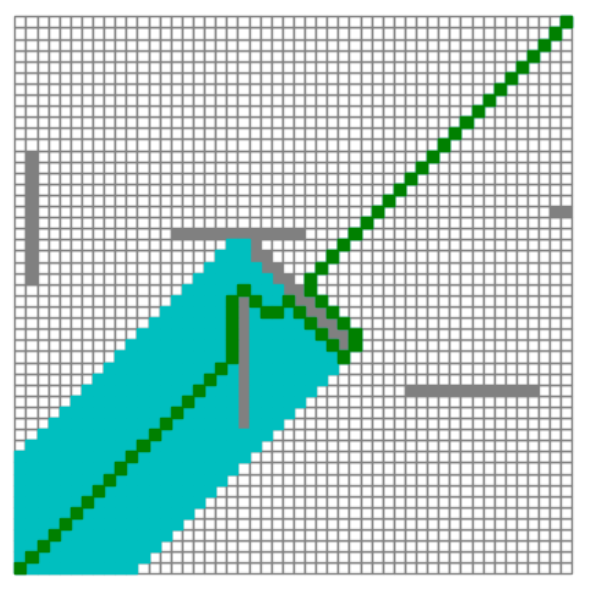