Always curious, how does the operating system work? We know how normal programming makes the code run, but those are high-level things. Later on, you will feel like a castle in the air, or someone has paved a lot of truth for you, but you know nothing about it.

I've read a series of articles about how to make my own operating system. It's great. https://wiki.0xffffff.org/  It completely shows the process of a knowledge seeker, including hardware loading, software takeover, operating system, memory, interrupt, driver, thread and so on. It can be said that it is a rare article for dispelling doubts. It should be said that many puzzles about the operating system can be found here. Of course, you have to summarize it yourself.

However, I still have a feeling that no matter how much I see the principle, it is still very empty. Although the above demo has talked about everything, it seems to have talked about all the problems, but it is only a demo after all. Perhaps this is not the case? At least it won't be that simple. This really bothers my beating heart.

Later, I came across an article about epoll: https://bbs.gameres.com/thread_842984_1_1.html   . After the explanation of this article, it can be said that the principle of the whole io is very thorough. And I did start from here and shared it with the team. I don't know how they feel. Anyway, I feel very transparent. This is about io, which can be said to be a small point in the operating system. But I personally think that you may only need to understand the framework once, but the small points need to be pondered over and over again. We need to find the answer with the question, which is often more about small points.

2. Dare you bite the hard bone of the operating system?

To tell you the truth, I dare not. The reason is that it is too complex and grand, which is a difficulty in the larger direction. Secondly, it may be difficult for me to pass the language alone, because you should at least be good enough in languages such as assembly and C, but you are only superficial. Just as the saying goes, how dare you enter prosperity when you are poor all your life, and how dare you miss a beautiful woman when you are clean.

Do you just muddle along? But there are always some questions in my heart and I don't know how to solve them. First, you can't ask many people. Second, you don't know how to ask. Third, can you understand even if others tell you? (like teaching)

So, let's find out for ourselves. In fact, there are too many scattered answers on the Internet. It seems that they can understand, but they don't seem to understand very well.

The best documents are in the official data. The best answers are in the code. So why not go and have a look.

Maybe we usually look at these source codes on github. But at home, github's speed is really not flattering.

As for reading tools, it's OK to use sublime for purely soy sauce. If you want to be better, eclipse is also OK. Of course, you may have to set other environmental problems.

The overall directory structure is as follows: 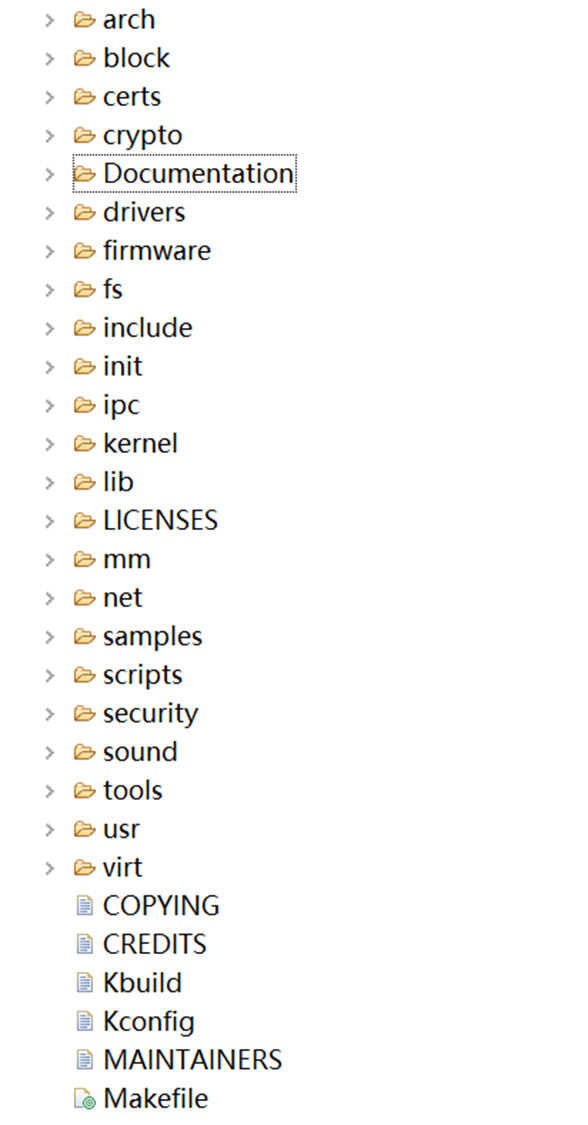 The details are briefly described as follows:

Among them, the Documentation directory may be irrelevant to the source code, but it is very important for us to understand the system. (because most of us can only understand the surface meaning of the text)

Taking the implementation of x86 as an example, the startup process is roughly as follows: take header Start with s and start with main C end (where we think we can understand).

Detailed code examples are as follows:

This article does not do in-depth discussion, just to sort out the context. The profound meaning needs to be understood by each. Anyway, after power on and startup, enter the BIOS, hand in the permission, transfer the special address, then go to the system startup, load the assembly instructions of the corresponding platform, make various hardware settings, and finally go to the process of C code entry that we are familiar with. In this process, there are more operations such as memory addresses and registers. It can be said that it involves a wide range of things, so we can't ask too much, and maybe we don't need to ask too much.