After combing the VDO-SLAM source code in two tones

The first tone is to write so much. The second tone is to sort out some contents of global optimization, but it is estimated that it will take some time. This record is purely personal understanding. If there is any difference, welcome to discuss ~ as for the part of using optical flow for dynamic object tracking in the paper, I am not sure whether the understanding is correct. If you know, please give me some advice~

You can see some traces of ORBSLAM from the source code. The most critical place in the main function is slam TrackRGBD(imRGB,imD_f,imFlow,imSem,mTcw_gt,vObjPose_gt,tframe,imTraj,nImages);， From here, you can enter the whole system. Here are two things to understand:

1. How to get the pose truth matrix here and what is its function?
The files of pose truth values are found on the official website of the dataset. Some may need to be converted because of different coordinate systems. In the source code, this truth value is only used to calculate the error result, which will not affect the Tracking process. For details, please refer to issue#21

From System::TrackRGBD(), you can see Tracking::GrabImageRGBD(). Here, list all the tasks in it, and don't write the same as ORBSLAM. Tracking::DynObjTracking() is the key function, and the details in it will be recorded in the next big point:

Here is the conclusion:

Here is to track the prior dynamic objects in the previous semantic mask. The process is as follows: 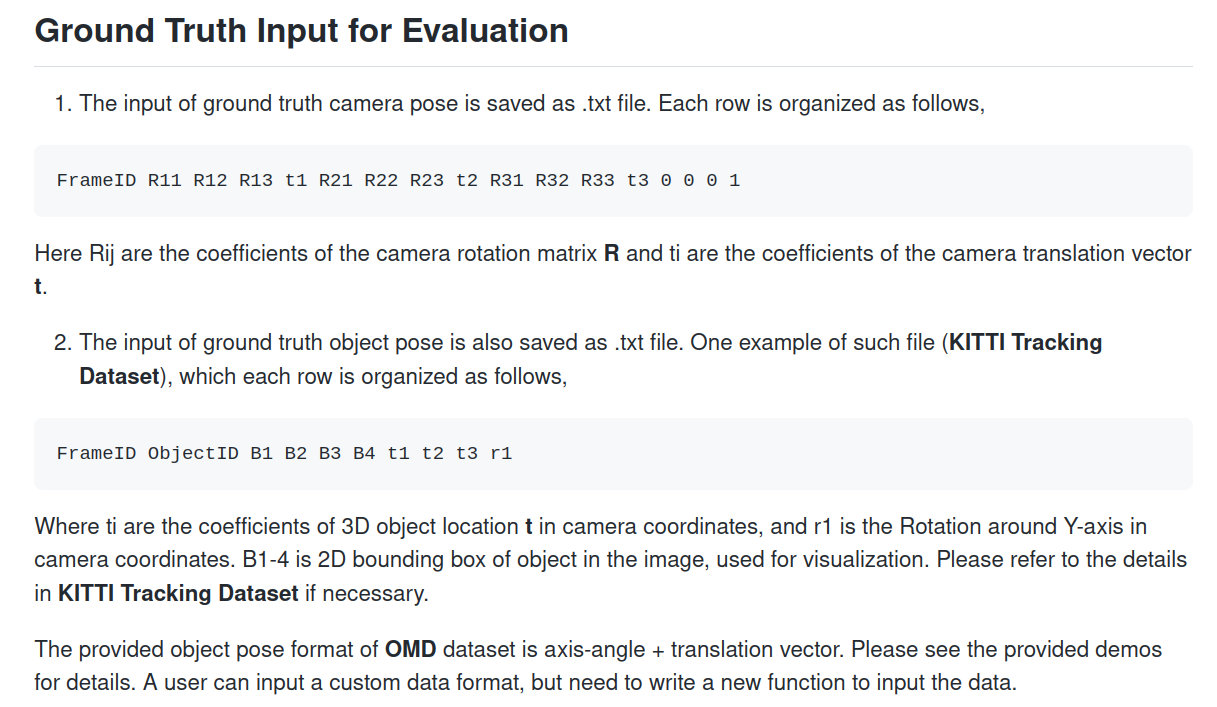 Here are the two most important excerpts:

In the source code of VDO-SLAM, there are some codes that do not affect the main line. There are some questions when looking at them, and the author also answered them on github, so it is also recorded here.

In the function Tracking::Track(), there is a section of the author's own code for debug ging to calculate the relative pose error of the camera.

This one's right for trace_ rpe_ The calculation of cam seems confusing. The main idea of the answer given by the author in github is as follows: in very few cases, RePoEr_cam may not be a positive definite matrix (but it will be very close to positive definite). At this time, the diagonal element will be slightly larger than 1, but the result of ACOS ((trace_rpe_cam - 1.0) / 2.0) is a non real number. In order to avoid this axis angle becoming an imaginary number, write it like this. But the standard method is to find a line closest to RePoEr_cam orthogonal matrix, and then carry out the following operations. The author's suggestion is that if you want to evaluate the results of VDO-SLAM, it is best to use other evaluation tools.

Extension: how to calculate the approximate orthogonal matrix of a matrix?

The questioner wondered that there were no semantic tags such as "cubes" or "boxes" in the COCO dataset, and wondered how the author got the mask.
A: for this less complex data set, the author uses the traditional visual method, combined with box color information + Otsu algorithm + multi label processing