A brief introduction to hash table
1) Hash table can be understood as a collection structure at the use level
2) If there is only key and no accompanying data value, you can use the HashSet structure (unorderderdedset in C + +)
3) If there are both key s and accompanying data value s, you can use the HashMap structure (unordered map in C + +)
4) Whether there is accompanying data or not is the only difference between HashMap and HashSet. The actual structure of the underlying is the same thing
5) Using the operations of hash table put, remove, put and get, it can be considered that the time complexity is O(1), but the constant time is relatively large
6) If the hash table is a basic type, it is internally passed by value, and the memory occupation is the size of this thing
7) If the hash table is not the basic type, it is passed internally by reference. The memory occupation is the size of the memory address of the hash table. It is related to the principle of the hash table,
The principle will be described in the chapter "data structures related to hash functions" of the promotion class

1) The ordered table can be understood as a set structure at the use level
2) If there is only key and no accompanying data value, you can use the TreeSet structure (called orderedset in C + +)
3) If there are both key s and accompanying data value s, you can use the TreeMap structure (called orderedmap in C + +)
4) Whether there is accompanying data or not is the only difference between TreeSet and TreeMap. The actual structure of the underlying is the same thing
5) The difference between an ordered table and a hash table is that an ordered table organizes key s in order, while a hash table does not organize at all
5) Red black tree, AVL tree, size balance tree and jump table all belong to ordered table structure, but the specific implementation of the bottom layer is different
6) If the items put into the ordered table are basic types, they are passed internally by value, and the memory occupation is the size of this item
7) If the object placed in the ordered table is not a basic type, a comparator must be provided. It is passed internally by reference. The memory occupation is the size of the object's memory address
8) No matter what the underlying implementation is, as long as it is an ordered table, it has the following fixed basic functions and fixed time complexity

[analysis]: analyze with a cur node and try to adjust the next or pre direction. It's a bit like exchanging values. Remember to move cur back to the end.

Topic 2
Leetcode.234 Whether it is a palindrome linked list.
written examination:
1) Stack
2) Speed pointer (grasp the boundary and note the leetcode problem solution), find the midpoint, just put the right side into the stack and pay attention to comparison.

interview:
1) Fast and slow pointer centering
2) Reverse the right half and compare it with the left one by one
3) Restore to the original linked list

Topic 3
Given a key, the linked list is less than on the left, equal to in, and greater than on the right.
written examination:
[analysis] store it in an array, partition it, and restore it back to the original linked list 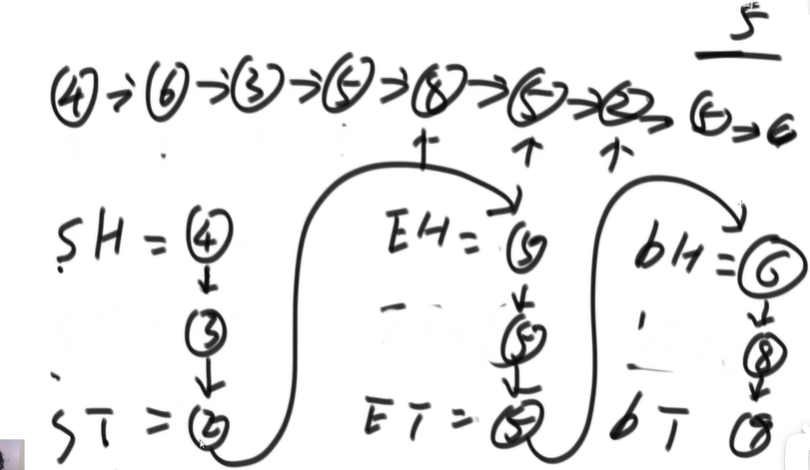 [analysis] define six pointers. Note that if there is no less than part, greater than part, equal to part. 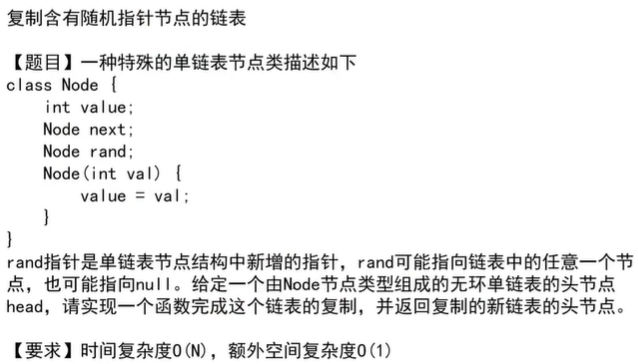 written examination:
[analysis]: use hashmap to store the original node and its clone node. Just string the clone nodes together; 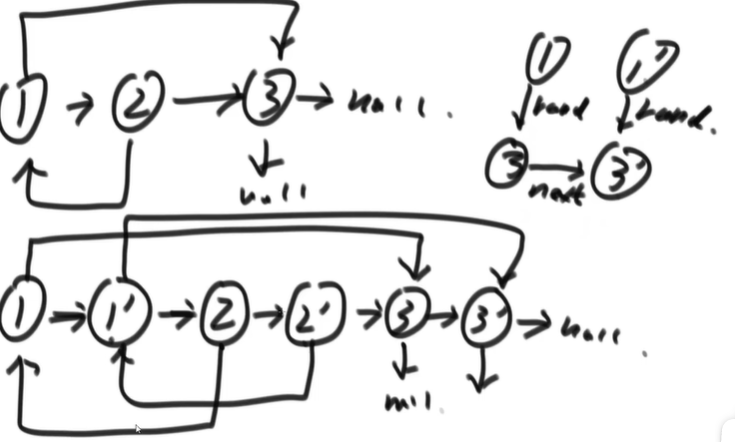 Prove that a single linked list has a ring
1) Hash set
2) Speed pointer
1. Fast 2step, slow 1step. After the pointer meets,
2. Quickly return the pointer to the origin, and then everyone moves step by step. Meeting is the node entering the ring for the first time. (loop with ring returns to loop node, while loop without ring returns to null) 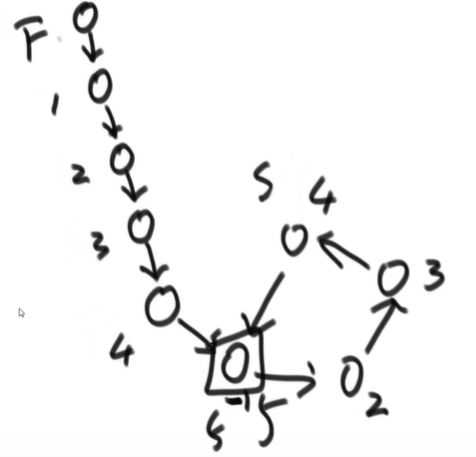 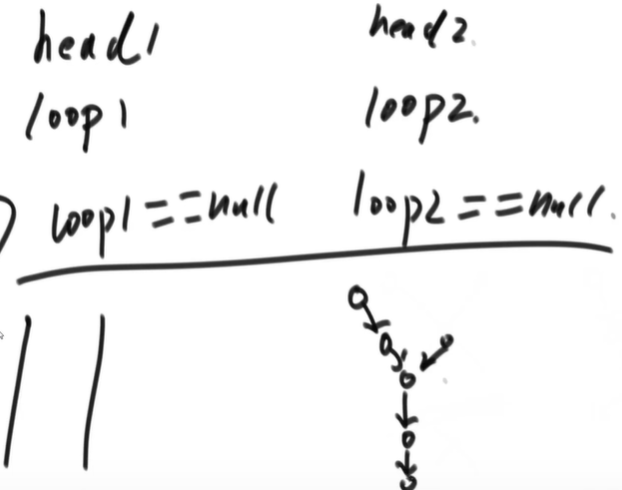 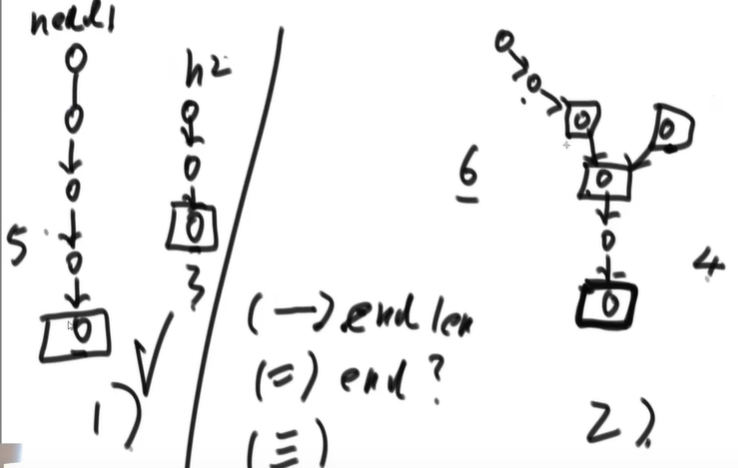 Let the parts of 6 and 4 be symmetrical and go down together. If they are equal, they will intersect 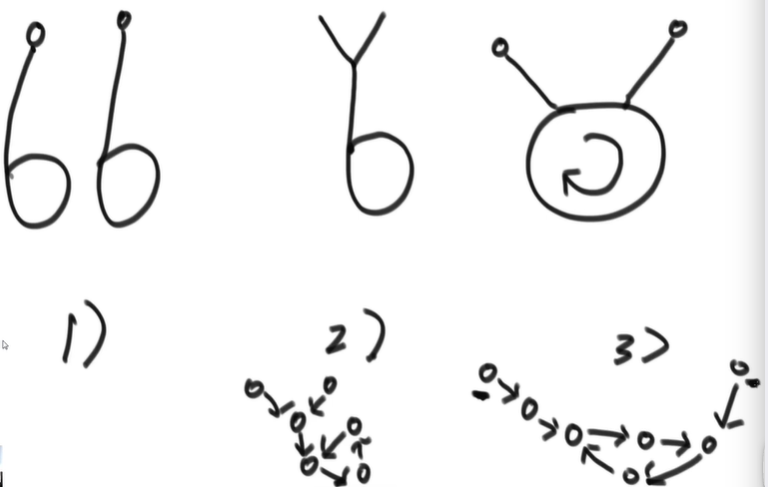 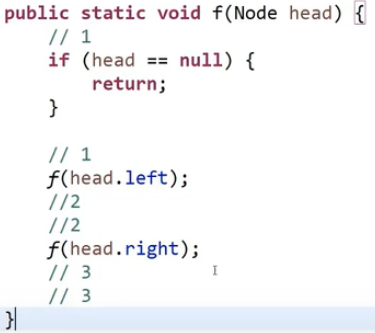 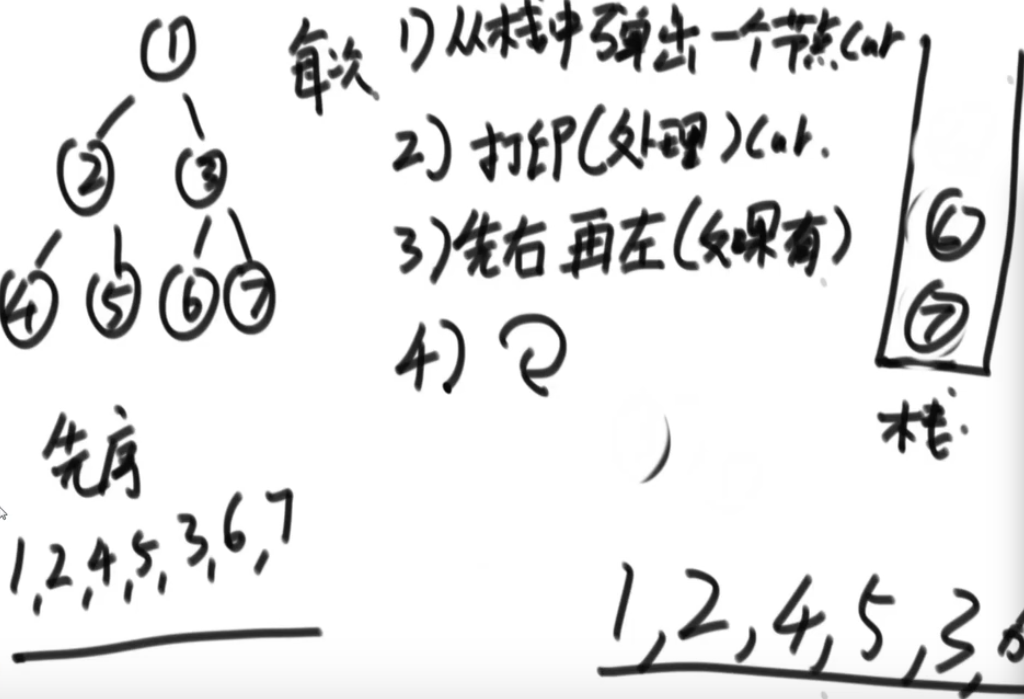 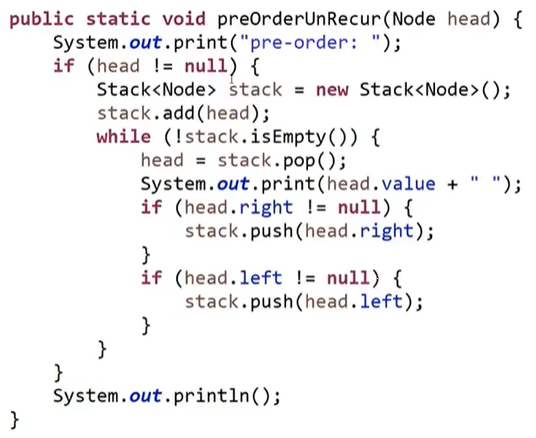 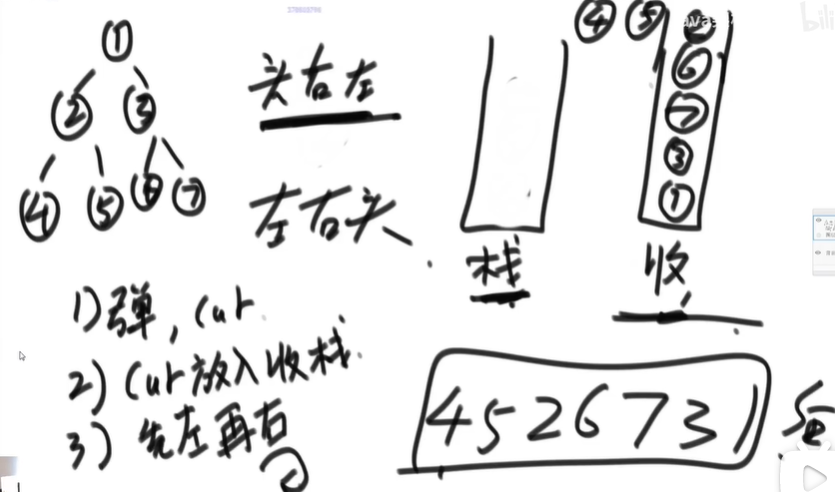 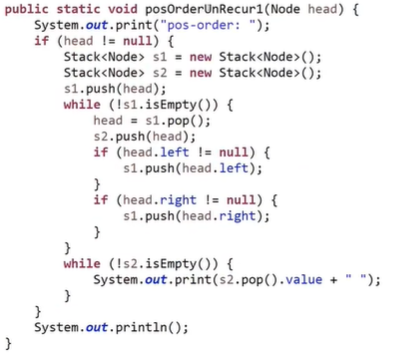 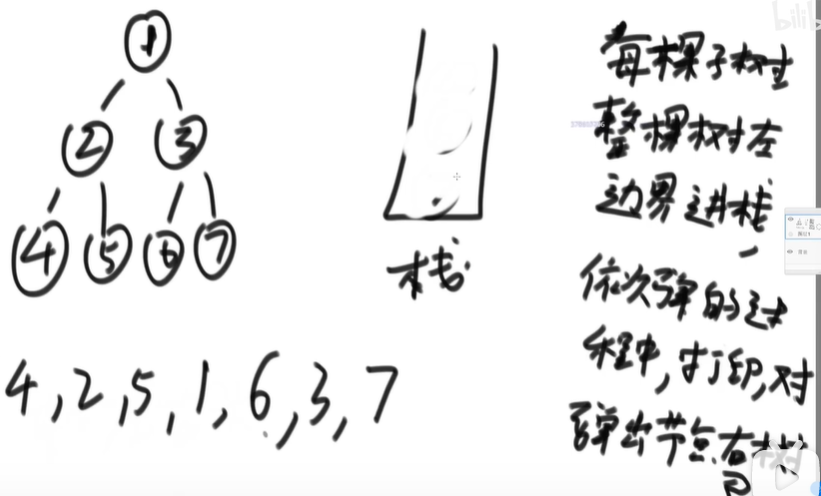 The left tree is all in at one time, then the cur node is processed, and then the right tree is repeated 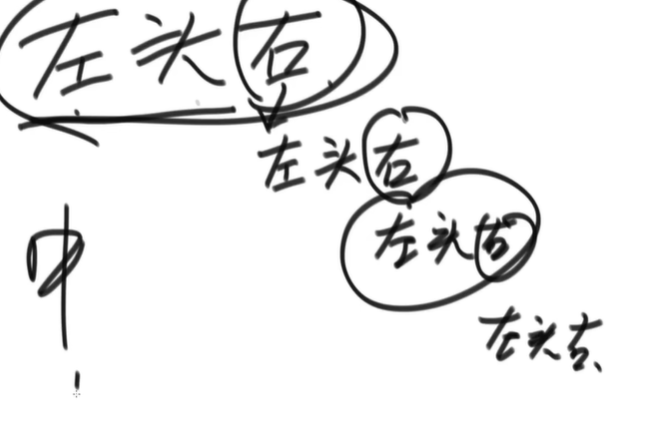 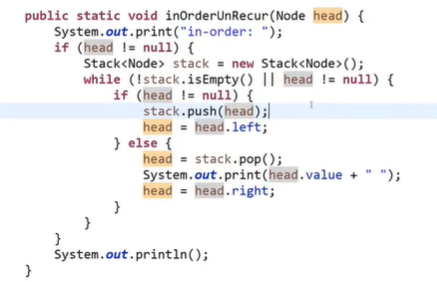 Queue, pop up first, put left and then right 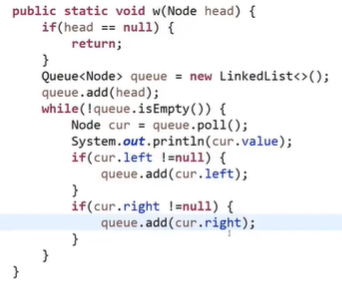 Topic 1
Find the maximum width of a binary tree

When the last one is finished, the team is empty, so it exits the loop, but the max and curLevel in if else are not updated.
while, add max = Math.max(max, curLevelNodes) 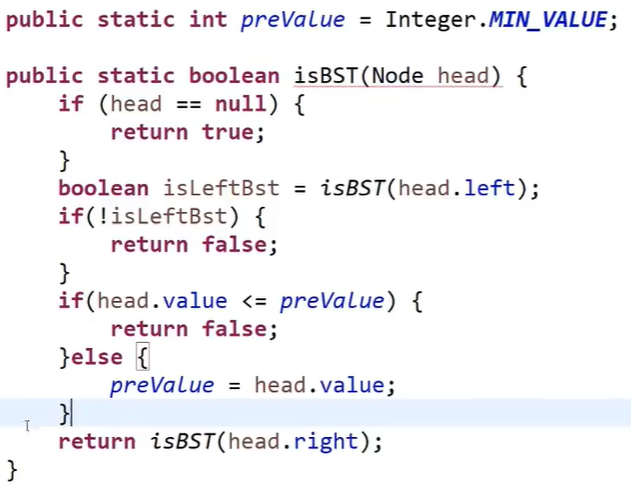 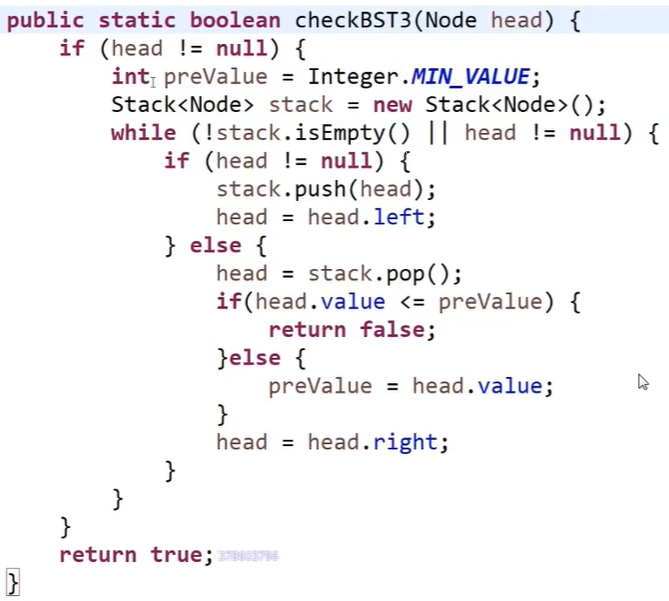 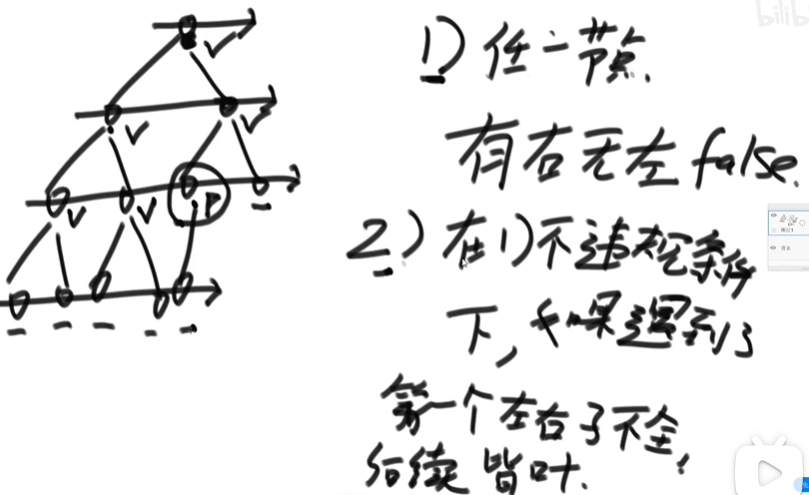 After the first node with a circle is encountered, the following nodes must be leaf nodes. 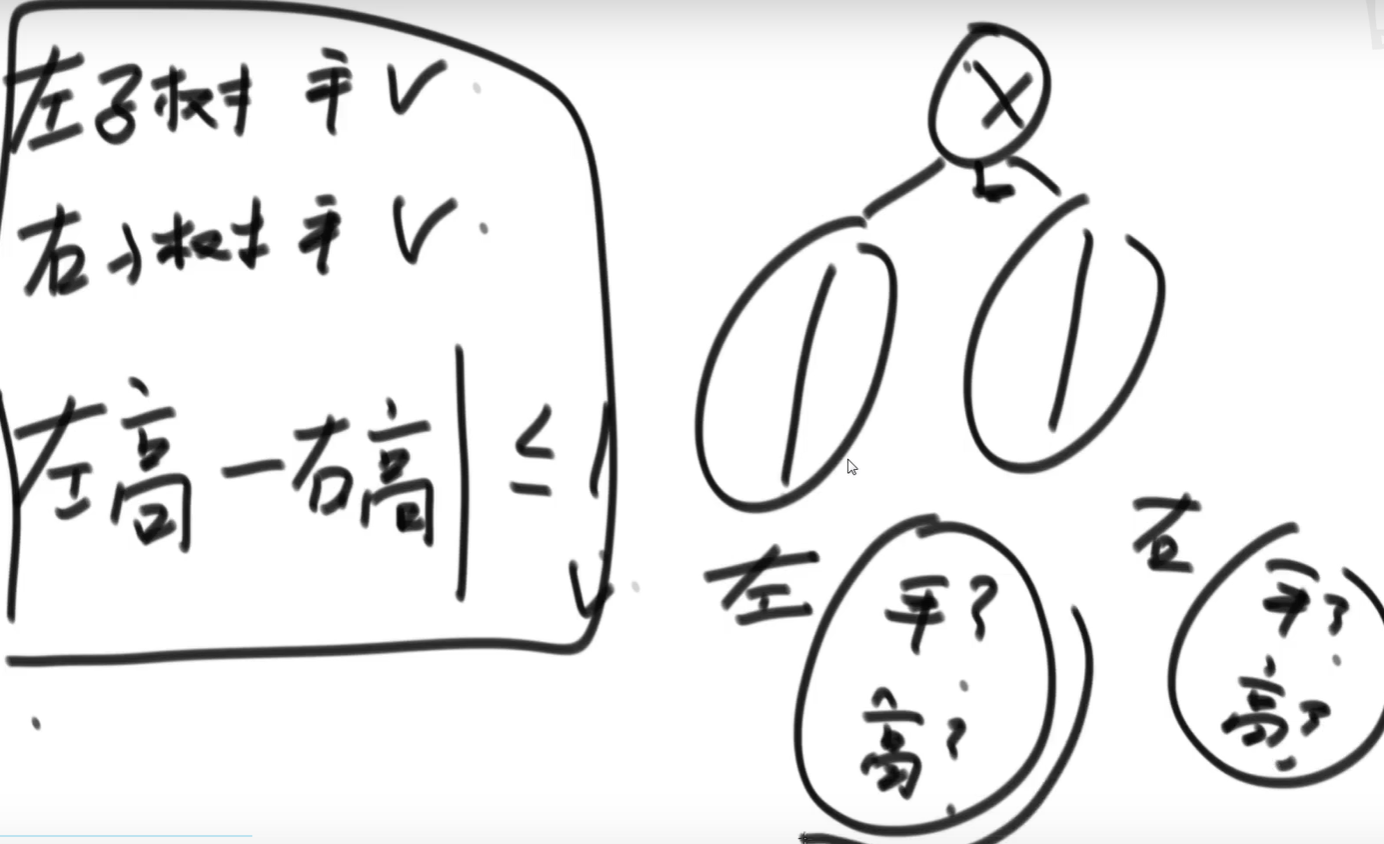 Routine (solve all tree DP, dynamic programming (the most difficult binary tree interview))
For: ask the left tree for information and the right tree for information to solve the problem
This routine cannot be solved by finding the median in the tree
The interview questions are designed to optimize, so it's easy to use.
1> BST
(left number BST)
&&Right number BST
&&Left Max < cur.val < right min)
!! Note: in the recursive routine, the returned items should be the same, so the left and right numbers should return three information (bool isBST, int max, int min) 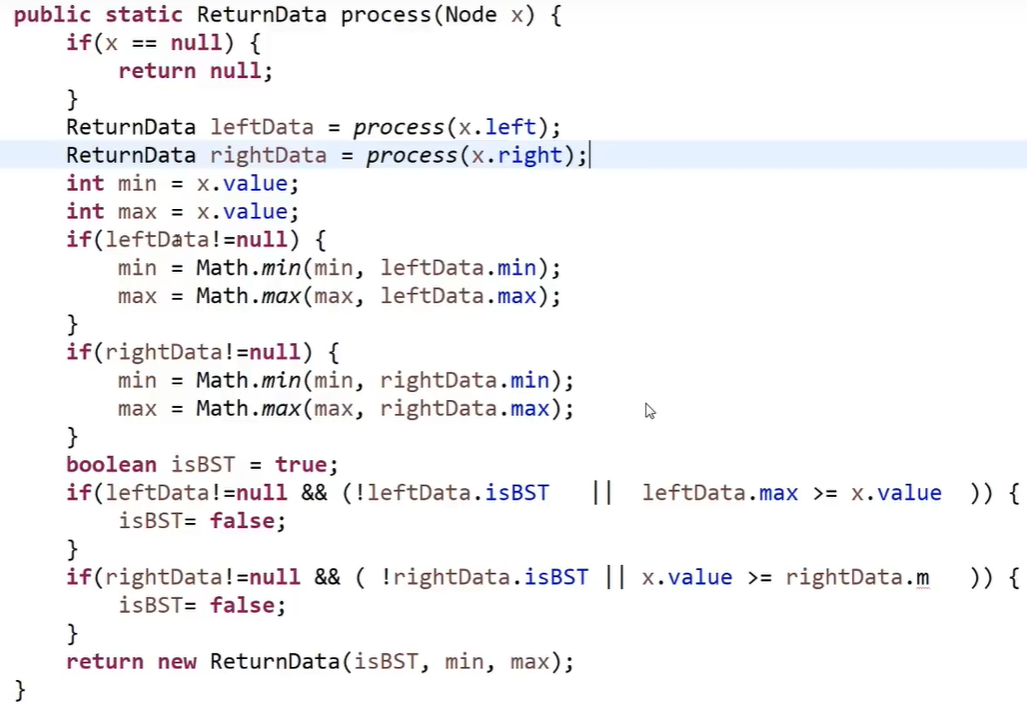 Topic 2 successor nodes
There is one more parent attribute than an ordinary binary tree, and the parent of head is empty
The last node of the middle order traversal result is null 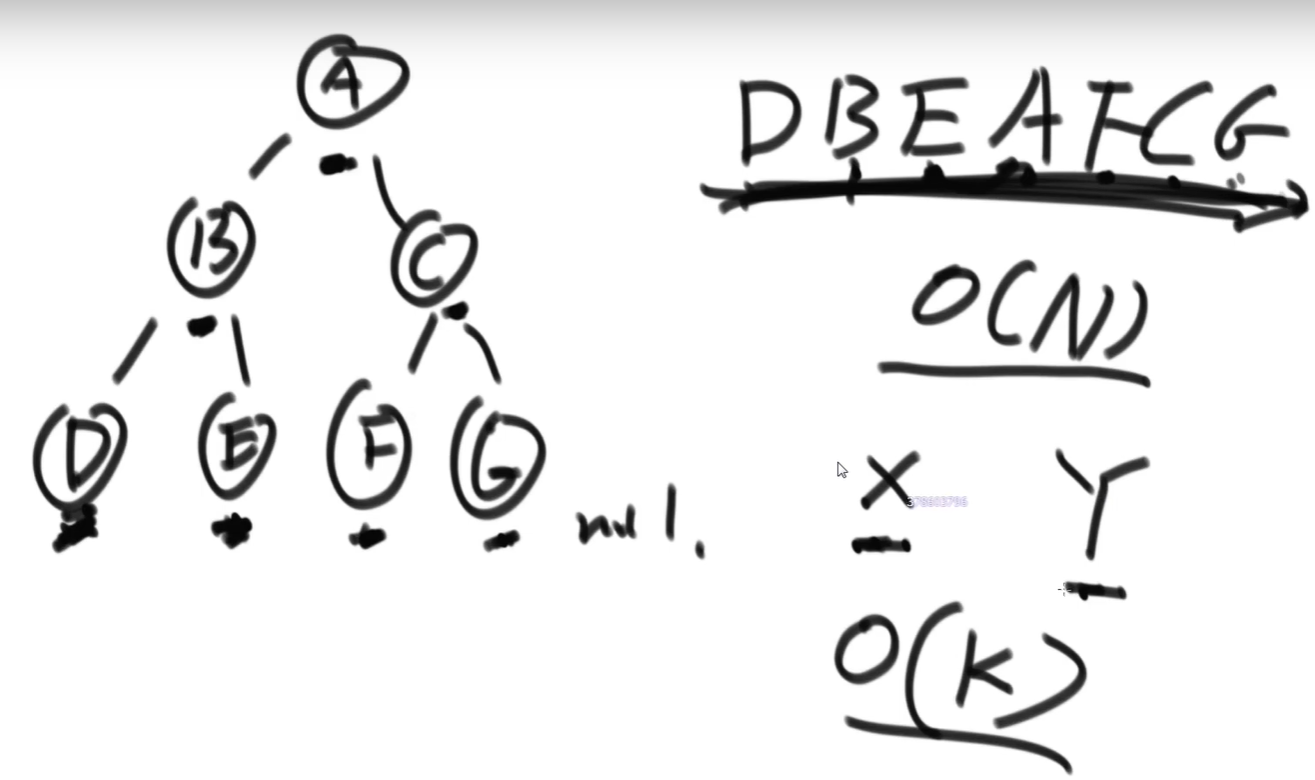 There is a right tree, = "find the one at the bottom left of the right number
If there is no right number, = "go back to become a left child and return to its parent node. (the rightmost one will not meet this condition, but the father of the head is just empty and will not be affected.) 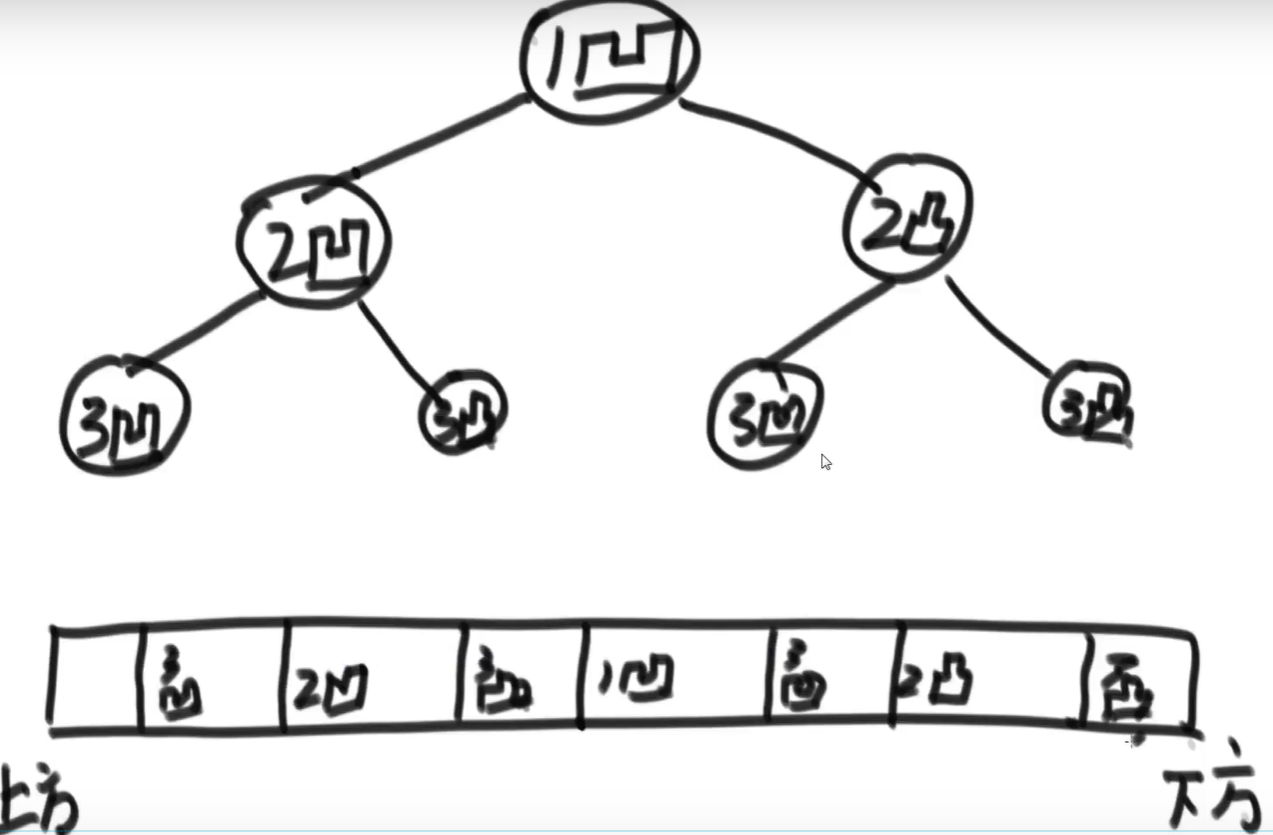