One day, a colleague on the product side contacted him and reported an error in the bill transmission program. The phenomenon is as follows:

In fact, the node only provides an sftp service for the product side to transmit bills for temporary storage, which is taken away by the billing department.

So I asked my o & M colleague to go to the server and found the following problems:

First of all, the link has accumulated tens of thousands in several days and is not automatically released. It can almost be concluded that the client is not released for the following reasons: 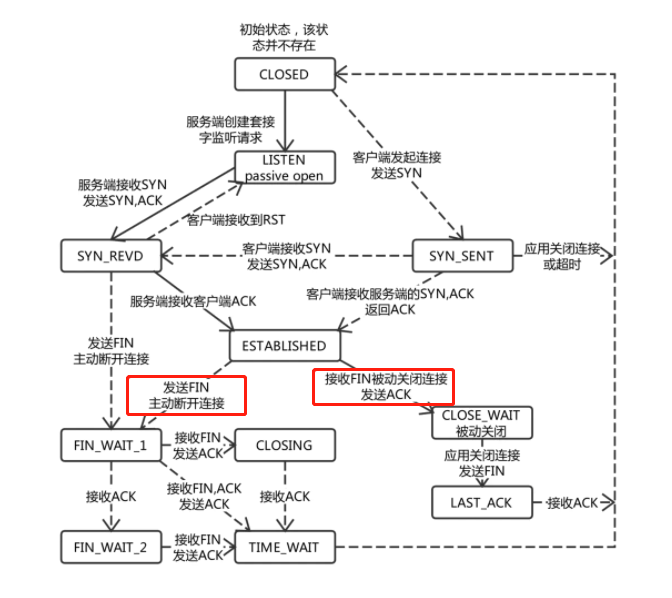 According to the state machine requested by TCP, the link in the ESTABLISHED state will actively disconnect the TCP link only when sending FIN or receiving FIN (that is, no one sends FIN);

Suppose a scenario in which the client sends a FIN but the server does not receive it because of the network or for some reason, the TCP keepalive mechanism will detect it many times and disconnect it (that means that the keepalive mechanism always responds).

Keep alive will be the next introduction to TCP request alive.

Therefore, the product side was organized to conduct troubleshooting and finally find the reason:

In the original code, after exiting the sftp task, only the channel is closed without closing the corresponding session (the red box content is missing)

According to the official example: http://www.jcraft.com/jsch/examples/Sftp.java.html Finally, the session should be closed so that there will be no residue. 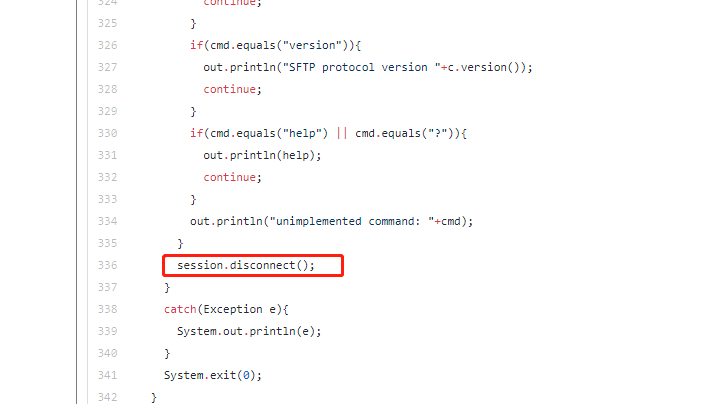 What is channel and session? #

3.1. What are Channels? ----------------- from:Net::SSH Manual
The SSH protocol requires that requests for services on a remote machine be made over channels. A single SSH connection may contain multiple channels, all run simultaneously over that connection.
Each channel, in turn, represents the processing of a single service. When you invoke a process on the remote host with Net::SSH, a channel is opened for that invocation, and all input and output relevant to that process is sent through that channel. The connection itself simply manages the packets of all of the channels that it has open.
This means that, for instance, over a single SSH connection you could execute a process, download a file via SFTP, and forward any number of ports, all (seemingly) at the same time!
Naturally, they do not occur simultaneously, but rather work in a "time-share" fashion by sharing the bandwidth of the connection. Nevertheless, the fact that these channels exist make working with the SSH protocol a bit more challenging than simpler protocols (like FTP, HTTP, or Telnet).

According to the above information, we can see that:

The shape is as follows:

So far, the problem has been solved, so it needs to be analyzed again:

Have you configured the performance limit of sshd service in the early stage? #

It is understood that in order to limit the number of links on the product side in the early stage, there have been corresponding restricted configurations:

But why is it that hundreds of thousands of connections have not been released in actual production?

After some investigation, the reason is finally found: each login will create a new connection in the ssh service, and each sftp operation at the code level will generate a new session / session.
Therefore, the maxsession actually limits the number of new sessions that can be created for each connection.

Therefore, the configuration exists, but it does not play the expected effect.

So how to configure it correctly? #

In fact, the limit on the number of login connections at the user level can be configured in ulimit:
/etc/security/limits. The conf file is actually the PAM in the Linux PAM (Pluggable Authentication Modules)_ limits. So, and only for a single session.

Therefore, the solution is obvious, as long as it is configured in limit

etc: you can combine the above maxsession to control the number of connections / sessions of a user more accurately.

How to test the launch in the early stage? #

It is not carried out here, and the importance of the test work cannot be questioned; However, you can't test for testing. The last small function needs to run all the tests again;
I'm afraid the article is too small to discuss.

Why didn't you find out in advance? #

In the early stage, the monitoring alarm was accessed, but the access content was only limited to the scene where the openssh process disappeared and port 22 was lost;
Obviously, there is a lack of monitoring on the number of processes, TCP links and port consumption;
In a word, there is only 1 / 0 monitoring and no health/err monitoring;
The same is true for the above reasons. We can neither passively wait for a single supplement after fault discovery, nor bring the complexity of overall operation and maintenance due to too many detailed monitoring items;
Therefore, my personal understanding is to add the monitoring items of general indicators, that is, the monitoring indicators need to reflect the common problems at the system level or the health degree at the service level, and implement them into ssh services. The suggestions are as follows:
Process quantity monitoring (no), TCP link quantity monitoring (yes, percentage monitoring), port consumption quantity monitoring (yes, percentage monitoring), ssh service response time dial test (yes, simulate ssh login and scp operation monitoring)