After understanding the basic implementation principle of thread pool in Java, how do developers apply thread pool in some excellent Java frameworks?

Take Tomcat and dubbo as examples to analyze the application of thread pool in actual production.

Tomcat extends the thread pool of JUC based on its own business scenario. Its main extensions include two classes:

Then override the execute method

In addition, why add some additional functions, such as stopCurrentThreadIfNeeded, and turn off the current thread to prevent memory leakage.

TaskQueue is a blocking queue implemented by tomcat. It mainly rewrites the offer method.

In the JUC thread pool, the second step of the execute method is to try to add to the queue when the number of threads is greater than the number of cores. If the addition fails, create a new thread to execute the task.

Why did tomcat make this change?

As a web container, Tomcat needs to process a large number of network requests, so generally, its scenario is IO intensive. In this scenario, the thread execution time is short, and increasing the number of threads can enhance the concurrent processing ability.

When it comes to the application of thread pool in dubbo, you must first understand the thread model in dubbo.

By default, the underlying network communication of dubbo uses netty. Netty is implemented and extended based on Java Nio by default, so it adopts Selector network communication mode. The implementation in netty is that the service party uses two-level thread pools, EventLoopGroup(boss) and EventLoopGroup(worker). The former handles IO connections and the latter handles IO read-write events.

How should the service provider's Netty IO thread handle the business logic?

dubbo provides five thread models according to whether the requested message is processed directly on the IO thread or by the business thread pool:

In dubbo's design, SPI mechanism is widely used so that users can freely configure the policies used in various scenarios. The same is true for the thread model policy. The default policy is all.

dubbo also provides a variety of implementations for thread pools.

The default policy of the service provider is a thread pool with a fixed number of threads.

In Dubbo version 2.7.5, the process pool model at the consumer end is optimized because:

The thread pool policy on the consumer side is cached by default. The thread pool will create a thread for each consumption request. When the concurrency of consumer applications is large or the response time of providers is long, there will be a lot of consumer threads. 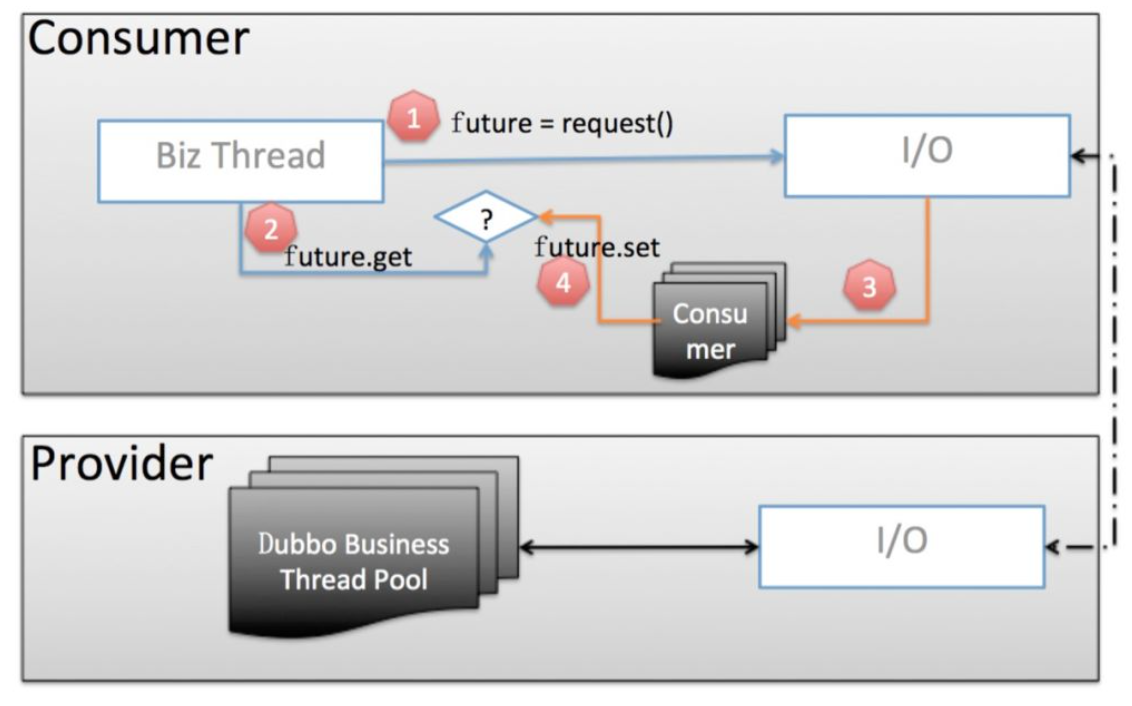 The biggest difference from ordinary thread pools is that ThreadlessExecutor does not manage any threads.

By calling the execute() method, the tasks submitted to the treadlesexecutor will not be scheduled to specific threads.

Before calling the future.get() method, the consumer business thread waits in a queue until the service provider returns the result