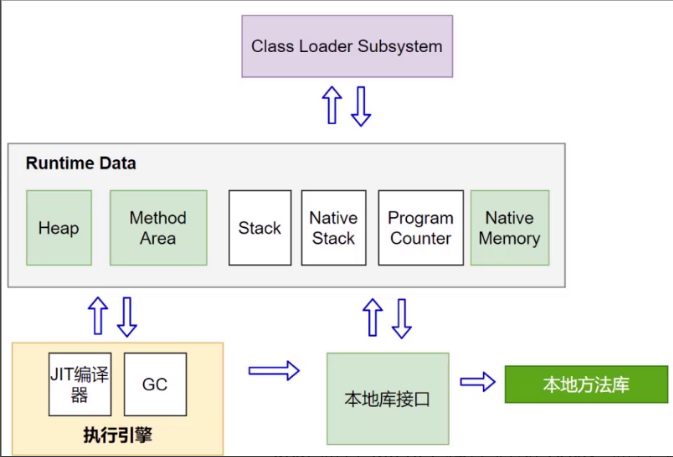 The data in the Method area is Runtime Data, and some of these data are instructions. These instructions need to run and must rely on threads. stack and ProgramCounter are required for thread execution. When these two parts are combined to execute the program, heap (heap is required for object initialization) is required. If JNI(java native interface) is called, Native memory is also required

GC is the garbage collector and java memory allocation tool, that is, the actual manager of the java heap.

Local library interface: any language inevitably calls the local interface. For example, the Java thread is only an Object, and it has no way to execute the program. Only the operating system can execute and call the CPU, including the memory allocation of GC. It also needs memory space from the operating system. The local library interface will call local methods to implement.

The class obtained by Classloader.loadClass is unlinked.

The class obtained by Class.forName has been initialized

Parents' names are not accurate. In fact, it is father, father's father.

AppClassLoader: the directory where the loader is located. It is written in Java (classpath) 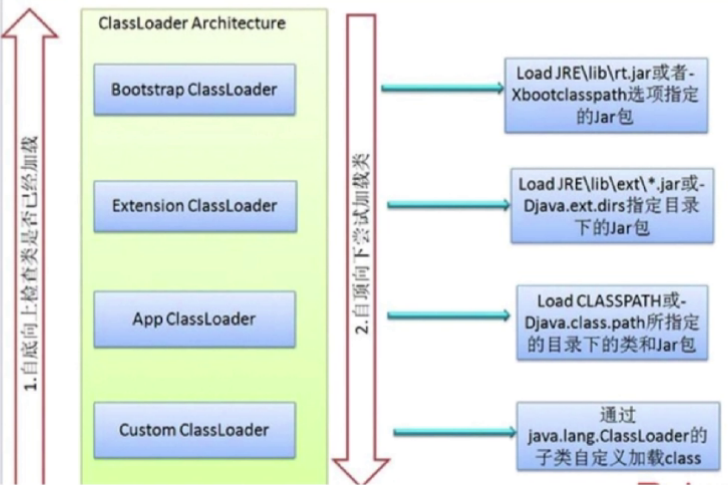 ClassLoader mainly works in the loading phase of Class loading. Its main function is to obtain Class binary data stream from outside the system.

All classes are loaded by ClassLoader, which is responsible for loading the binary data stream in the Class file into the system, and then handing it to the Java virtual machine for connection, initialization and other operations.

As you can see from the ClassLoader source code, this class is an abstract class.

Parent is also a ClassLoader type, indicating that there are many types of ClassLoader.

An important method is loadclass (string name). Name is the Class name. This method returns an object of Class type. If it is not found, a ClassNotFoundException exception will be thrown.

5: How to break the parental delegation model

There are many scenarios to break the parental delegation mechanism: JDBC, JNDI, Tomcat, etc

Because the parental delegation model was introduced after JDK1.2, and the class loader and abstract class java.lang.ClassLoader already existed in JDK1.0, Java designers have to make some compromises when introducing the parental delegation model in the face of the existing implementation code of user-defined class loader. Before that, the only purpose of users to inherit java.lang.ClassLoader is to This is to rewrite the loadClass() method. This is because the loader's private method loadClassInternal() will be called when the virtual machine loads the class, and the only logic of this method is to call its own loadClass().