In order to process the connection and requested data of the client, the server writes the following code

In this code, the thread of the server is blocked in two places, one is the accept function and the other is the read function

If you expand the details of the read function, it is found that it is blocked in two stages

The overall process is as follows: 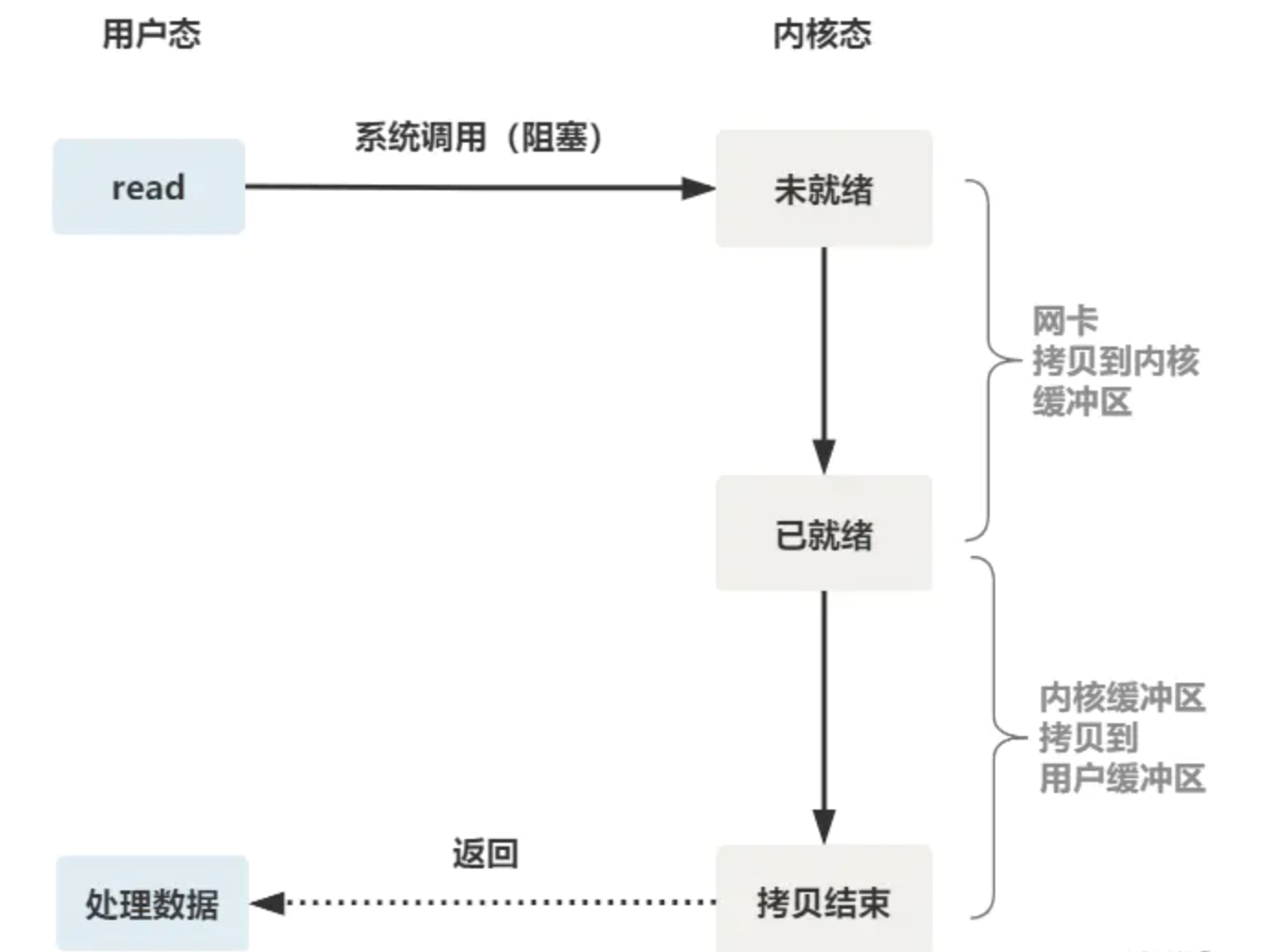 Therefore, if the client of this connection does not send data all the time, the server thread will be blocked all the time, will not return on the read function, and will not be able to accept other client connections

In order to solve the above problems, the key is to transform the read function

One way is to create a new process or thread every time, call the read function and do business processing

In this way, when a connection is established for a client, you can immediately wait for a new client connection without blocking the read request of the original client
However, this is not called non blocking IO. It just uses multithreading to make the main thread not stuck in the read function and does not process down. The read function provided by the operating system is still blocked

Therefore, the real non blocking IO cannot be processed only through the user layer, but the operating system should provide a non blocking read function
The effect of this read function is that if no data arrives (reaches the network card and copies it to the kernel buffer), it immediately returns an error value (- 1), rather than waiting in a blocking way

The operating system provides such a function. You only need to set the file descriptor to non blocking before calling read

In this way, the user thread needs to call read circularly until the return value is not - 1, and then start processing the business

The overall process is as follows: 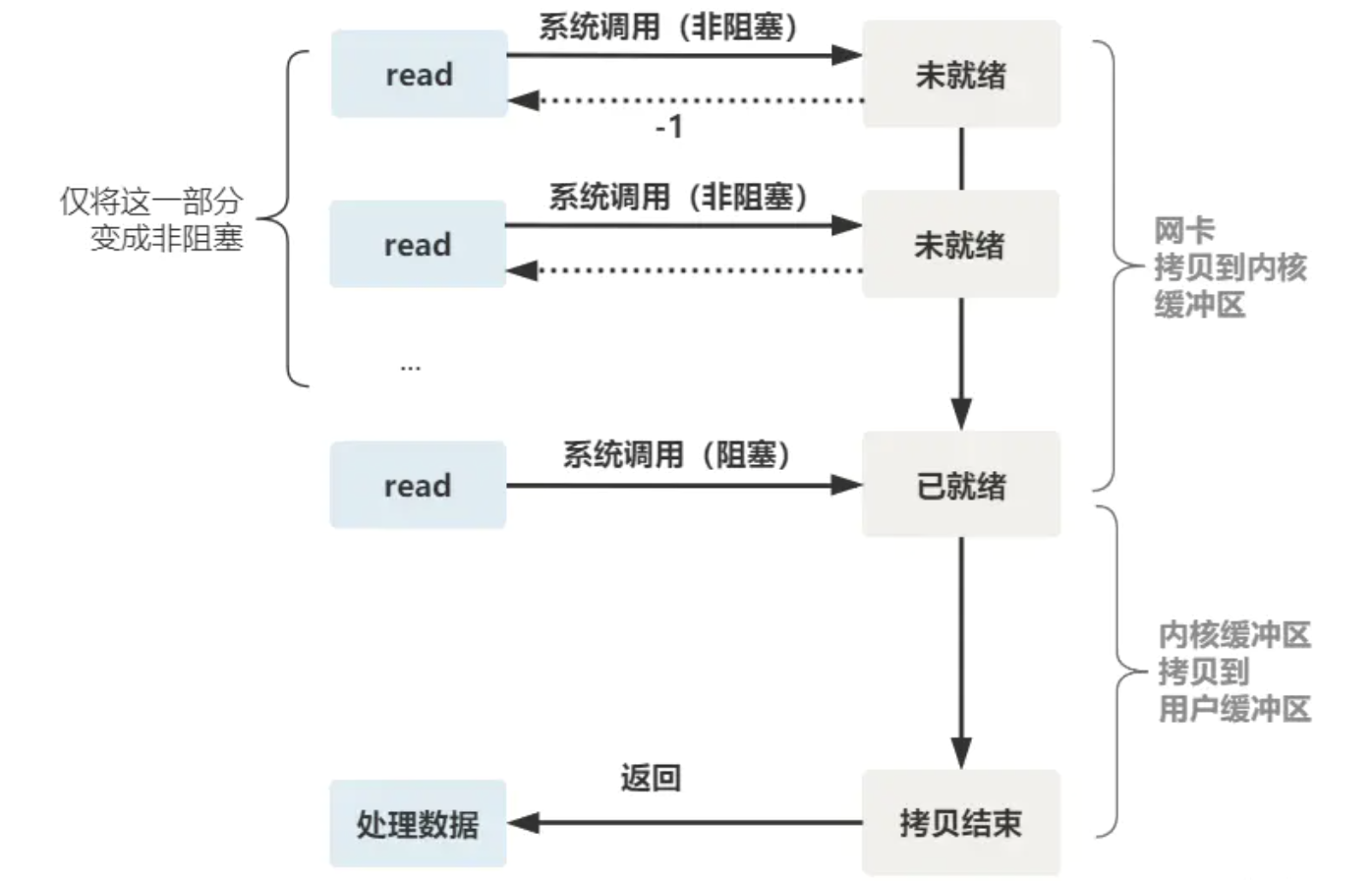 Of course, there is another way. After each client connection is accept ed, put the file descriptor (connfd) into an array, and then get a new thread to continuously traverse the array and call the non blocking read method of each element

However, this is the same as using multith read ing to transform blocking IO into non blocking io. This traversal method is just a small trick devised by the user. Each time the traversal returns - 1, it is still a system call that wastes resources

Therefore, it is still necessary for the operating system to provide a function with such an effect, and pass a batch of file descriptors to the kernel through a system call, which can be traversed by the kernel layer to really solve this problem 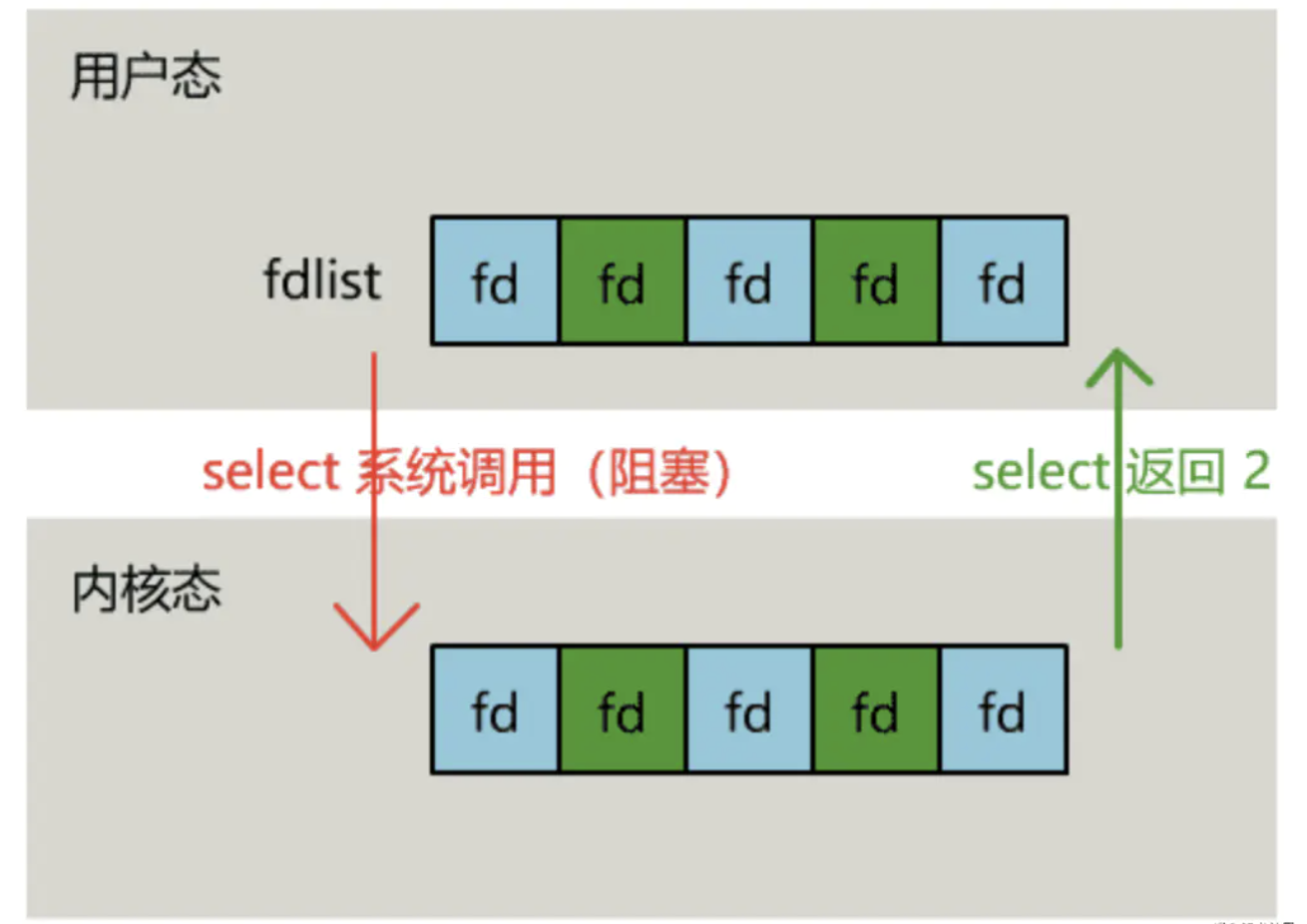 The functions called by the select system are defined as follows:

First, a thread continuously accepts client connections and puts the socket file descriptor into a list

Then, instead of traversing by itself, another thread calls select and gives the batch of file descriptor list s to the operating system for traversal

Several details can be seen:

The flow chart of the whole select is as follows: 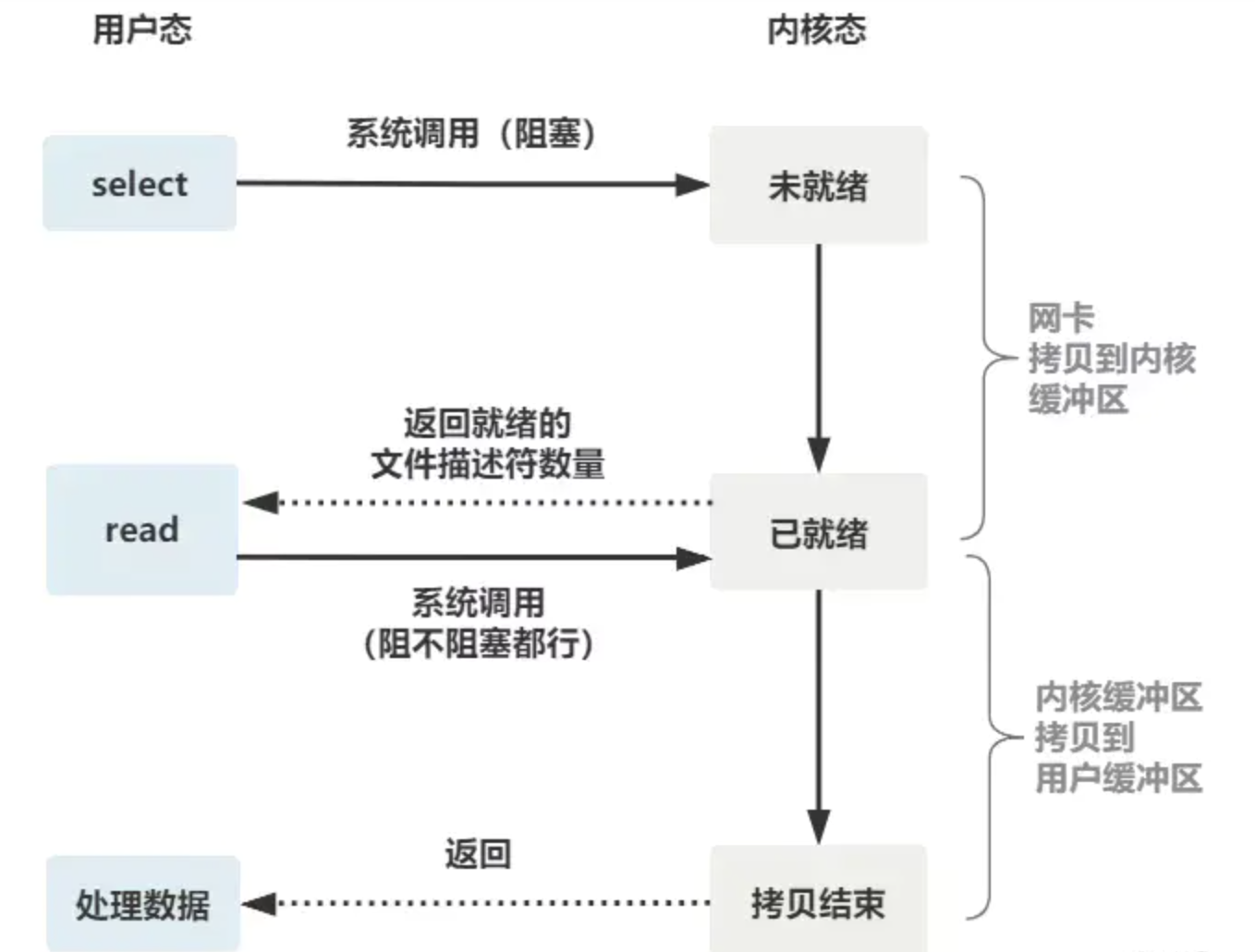 Remember the three details of select above?

The first step is to create an epoll handle

The second step is to add, modify or delete the file descriptor to be monitored to the kernel

In the third step, a select() call is similarly initiated 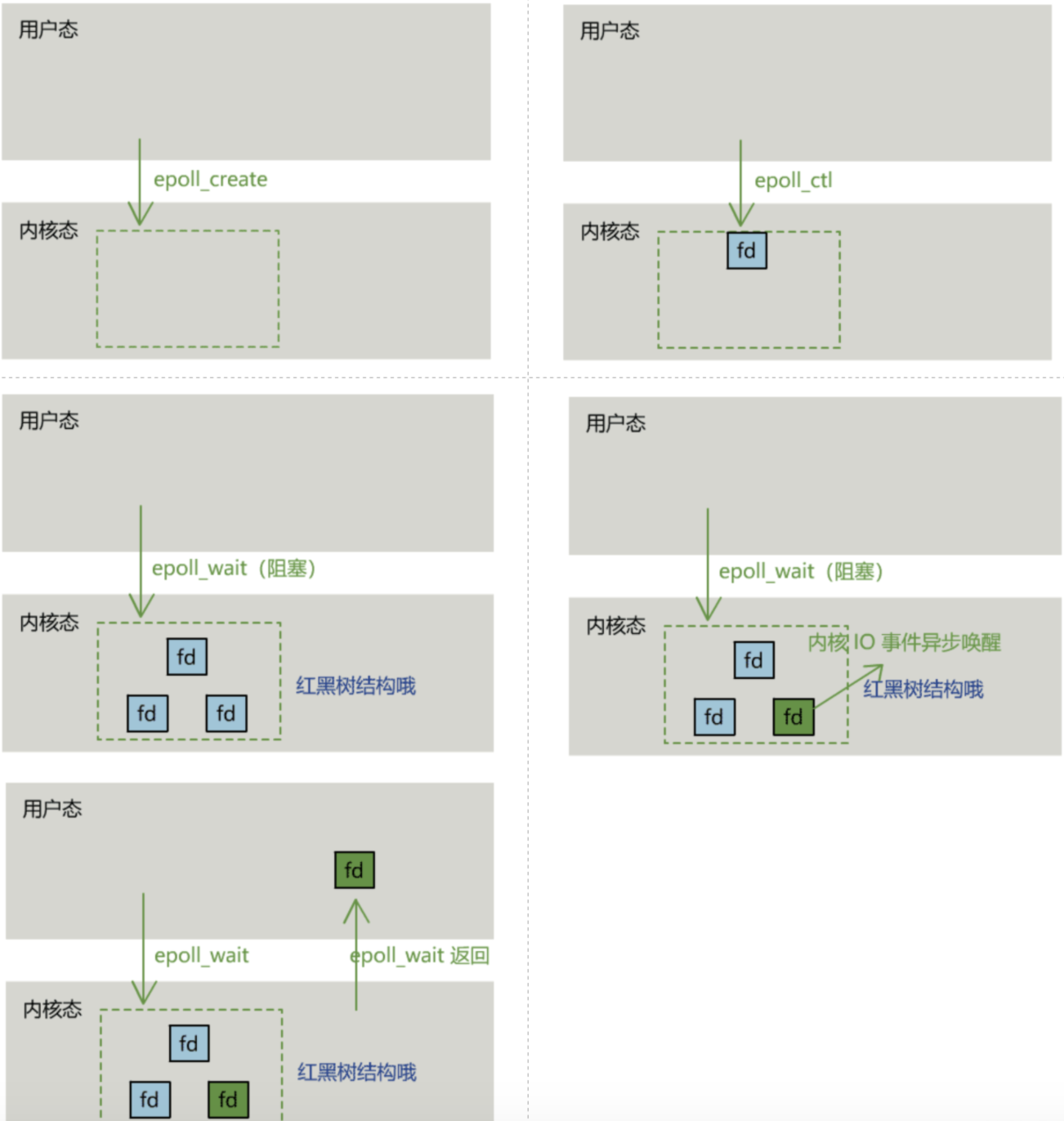