The topic is attacking and defending the world.

It's like a stack overflow, but there's no overflow.

Then look at the echo function

A little reverse, we can find that there is an array inside eval, which puts the first 16 of the previously read 0x400 bytes into s2. But it was launched when it met 0

However, in a 64 bit system, the occurrence of address 0 cannot be avoided. Therefore, we can only control the first address entered. Because the first address in the small end method is the address in front and 0 in the back, it can be read in. It feels a bit like the idea of stack migration here. Fortunately, there are other methods for this problem. It is not so complicated as stack migration.

It is observed that echo is called in main. The content we input for the first time is actually stored in the stack frame of main, and there is also a copy. So is it possible for us to go back to the stack frame of the previous function? However, in main, we entered padding with a length of 24 at the beginning, so we need to skip this part.

It is easy to think of using a generic gardet to find a gardet (24 + p64 (the function itself)) that can produce more than four pops in gardet, but there is also a pop that happens to be four,

Well, actually, he seems to be general gardet

OK, let's remove the a input at the beginning through these four pop s. Next, you can perform a general rop, first disclose the libc base address, and then pass in the process of system

We first enter the address 0x40082a, and then ret to 400810. We can see that several parameters of the previous pop are passed back to the three important registers of RDX, RSI and EDI. You can basically control the parameters of all functions. After that, another call command just arrived at the address we wanted to go. It seems to be prepared for hackers. Pay attention to the following rules when entering parameters.

This is for the call function (0x400819) and register value. You can see CTF all in one

OK, next, construct payload1 and disclose the write address

After getting the write address, libcSearcher looks for it and finds it.

After that, find the initial address, find the offset and send it to the system. I won't repeat it 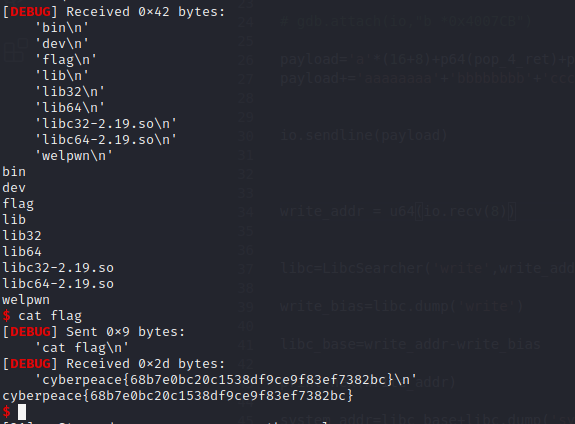