GOAL: to train a model on a variety of learning tasks, such that it can solve new learning tasks using only a small number of training samples.

The work of the network mainly includes the following three processes:

1. Pre training: the purpose is to train through a huge training set to learn and obtain an Embedding function for similarity feature extraction, which compresses a picture to a low dimensional vector, and the pictures of the same category or with similar features have similar vector values.

Pre training method 2: triple loss, randomly extract three images, one as anchor, one as positive image and the other as negative image. After embedding, calculate the similarity (distance, take two norm as an example) D1 and D2 between them and anchor image respectively, Then LOSS=max{0, d1-d2+ α }， Its meaning is that the similarity of images in the same category is greater than that in different categories.

2. Fine tuning: the purpose is to fine tune the pre trained model according to the small Support Set in hand, so as to obtain better results.

Firstly, embed the Support Set through the pre trained network, obtain the feature vector, and then normalize it to obtain the vector M=[ μ 1， μ 2， μ 3] 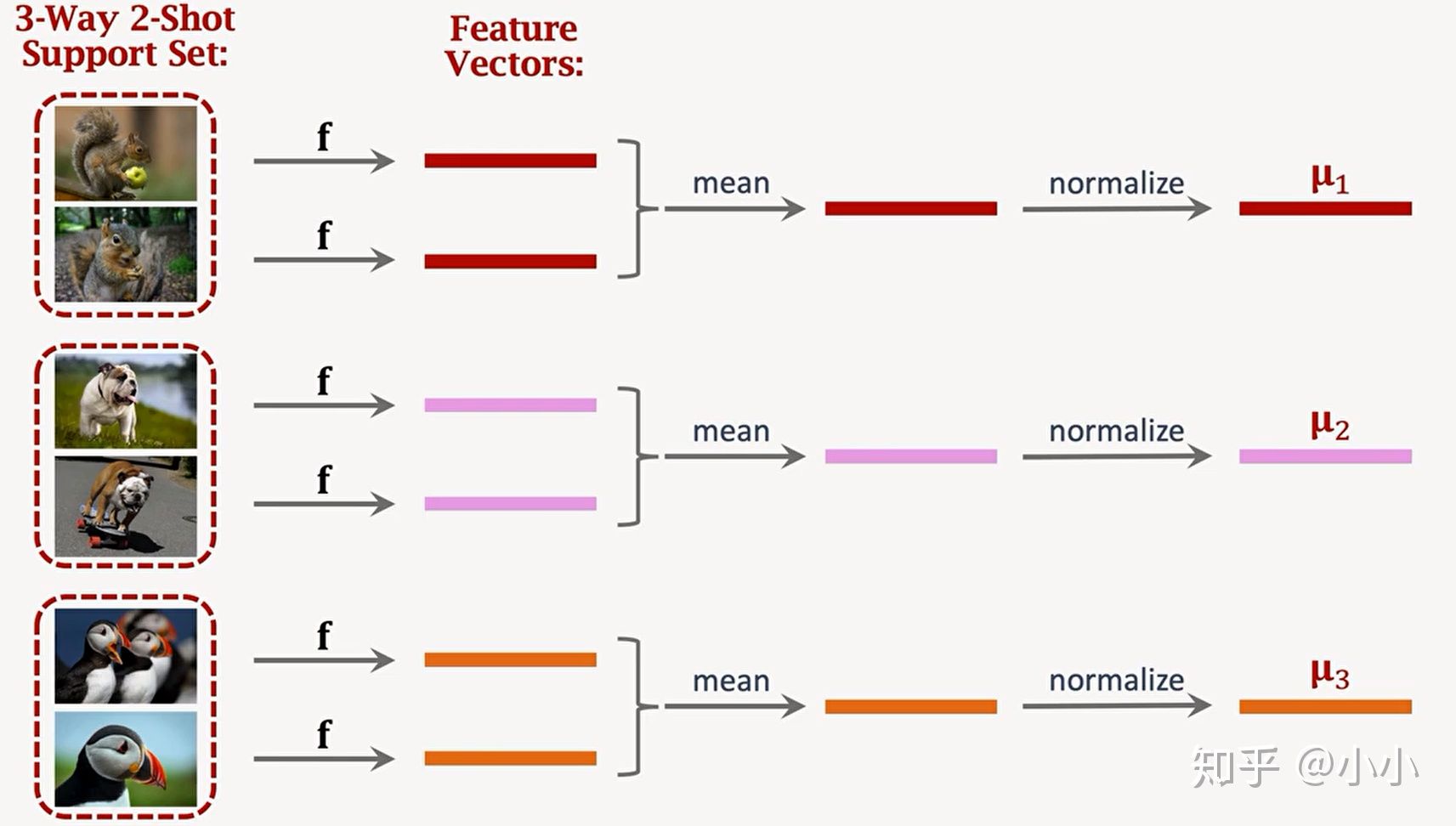 After obtaining the vector M, take the vector M as the initialization weight and the data (Xi, Yi) in the Support Set as the input to calculate the cosine distance to obtain the classification result. Compare the classification result with Yi to obtain the Loss function, so as to fine tune the classifier. Generally, the Loss function takes the cross entropy. In order to prevent over fitting, Regularization is usually performed, and the regularization function adopts Entropy Regulation.

(in fine tuning, q in the picture should be changed to Xi)

3. Test: use the model to test the random sample (query set) and observe its classification effect. 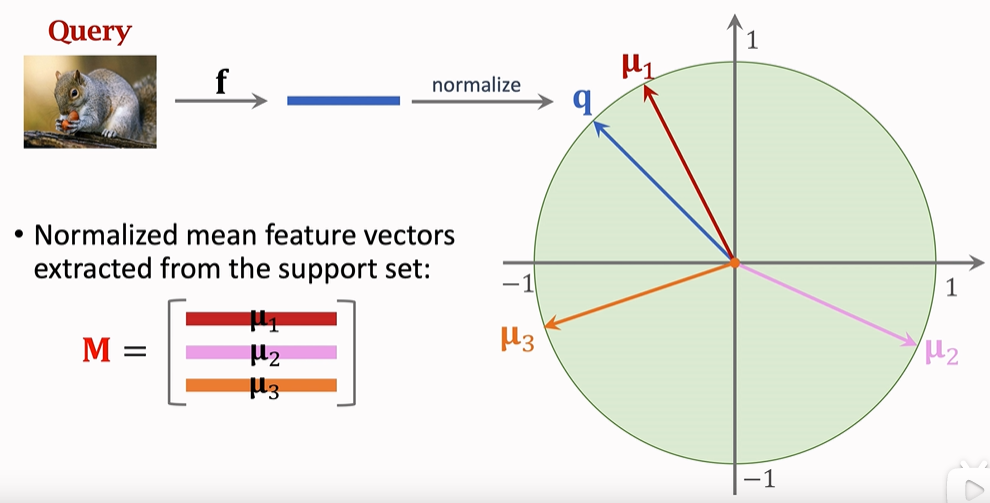 In the paper, it is mentioned that the model mainly has two innovations: 1 In the model, attention (softmax) and memory (LSTM) are used to accelerate learning. 2 end to end learning of Test and train conditions must match for the same task 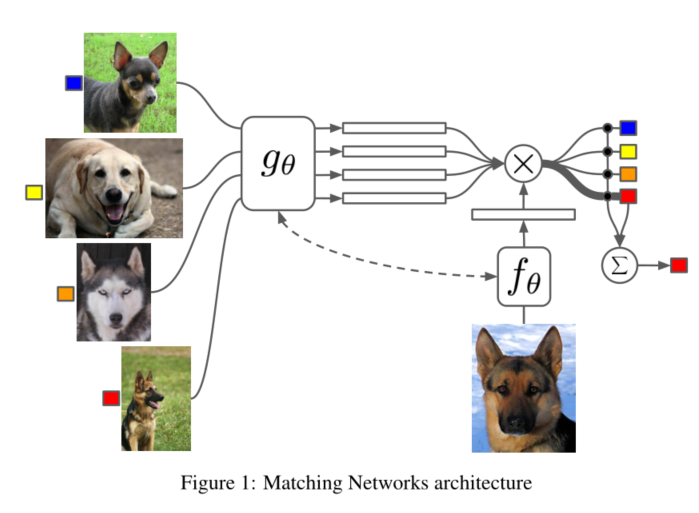 As shown in the figure above, g θ And f θ It is a feature extraction function, which compresses high-dimensional image data into feature vectors (embedding), usually using VGG or Inception network (later in the article, LSTM is also used to process CNN output, which is named "fully conditional embeddings, referred to as FCE), and {g θ And f θ Usually take the same network, but as mentioned in the paper, take different networks. The attention mechanism mentioned is mainly reflected in the second half of the network.

The above formula a(x,xi) represents attention, which is actually a softmax function, c(f(x),g(xi)) represents cosine similarity function, X cap represents the test input value of query set, and xi represents the sample of support set. The significance of this formula is to obtain the probability of which class the test sample belongs to.

The above formula a(x,xi) is obtained from the above formula, yi is the category label corresponding to xi, one hot code, and y cap is the final predicted value.

For the FCE part, it mainly includes two parts: BidrectionalLSTM and {AttentionLSTM. The former is connected to support set and the latter is connected to query set. According to the author, this memory can improve learning efficiency. Its network structure is shown in the following code:

The advantage is that it is very simple, and according to the article, it has similar accuracy to the Matching Network. Its basic idea is consistent with kNN (nearest neighbor algorithm), which mainly includes the following three processes:

2) for each category (way/class) of the Support Set, calculating the class prototype of its eigenvector is actually a process of solving the mean value:

3) for data X of Query Set, calculating the probability of belonging to each category is actually a calculation of Softmax, but it is worth mentioning that Bregman divergence (i.e. Euclidean distance) should be used to calculate the similarity in the paper

With regard to model agnostic, the author said: it is applicable to any model using gradient descent, including classification, regression and reinforcement learning.

Core idea: train the initial parameters of the model, so that these parameters can get good results after one or more gradient updates in the small data of the new task.

Do you think the above two descriptions are very mysterious but a little cowhide? Both are literal translations of the author's original text. The first half of this paper is frantically repeating the above two views with various expressions, playing tricks and playing tricks. In fact, the description of the core content is so little. It mainly includes the following three steps:

Finally, update the weight based on the summed gradient parameters. The parameters in the model() function are defined as:

And when did you pass in the gradient parameters of the previous summation???)

The derivation process comes from: https://www.bilibili.com/video/BV11E411G7V9 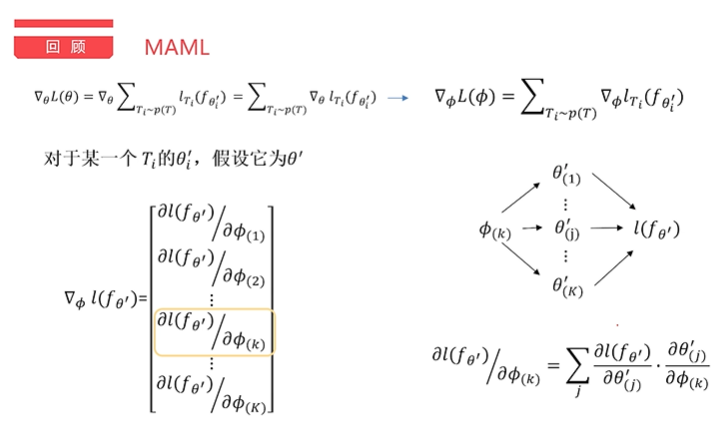 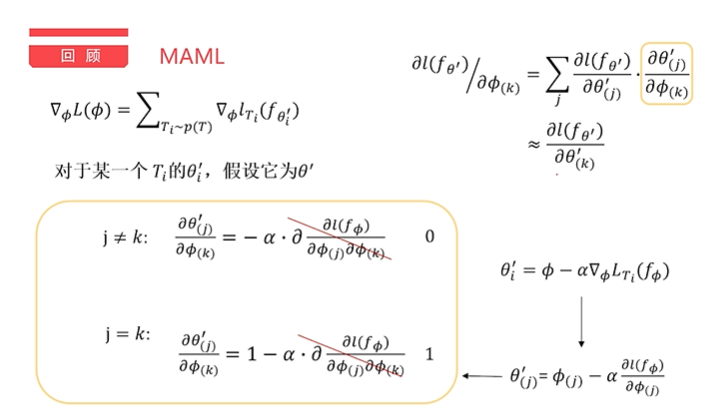 The results show that if the influence of the second order is ignored, the final result is equivalent to the optimized result of the Loss function θ So what is the impact or advantage of second order? Actually, i don't know.