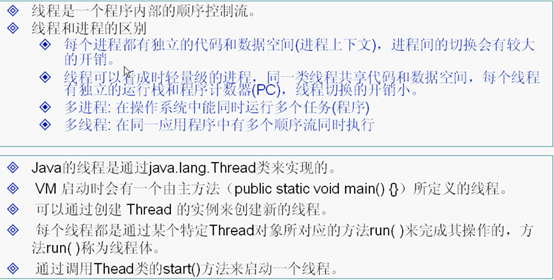 Each branch is a thread, and the program written before is a branch.
Process: a program is a process that puts code into the code area, which is called a process
Operating system scheduler
Thread is a dynamic concept: multiple execution paths within a process
The actual running in the machine are threads
The machine can execute multiple threads at the same time. Windows supports multiple threads and multiple processes (DOS is a single process)
In fact, the CPU executes multiple threads in rotation, which is faster, so it can be regarded as that the CPU executes multiple threads at the same time
But at a certain point in time, the CPU can only execute one thread
If there are multiple CPU s, you can really execute multithreading
Note that the CPU time slice is not necessarily average. Maybe this thread has more time and the other thread has less time.
The threads of a process share memory units (process exclusive memory), which will lead to conflict and concurrency problems. 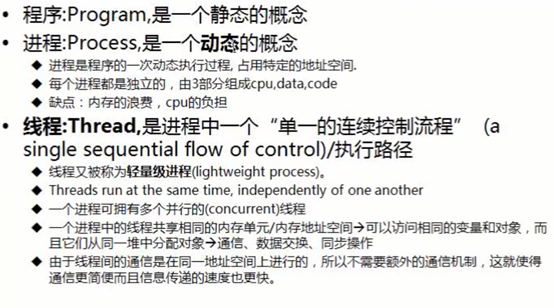 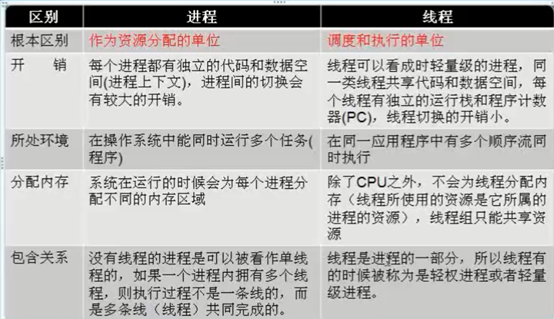 The essential difference between process and thread is that each process has its own set of variables, while threads share data

How to create a thread:

① Customize a class MyThread to implement the run method implements Runnable of the Runnable interface
② In the main method, create a custom class new MyThread mt
(3) in the main method, new is a Thread class. Its construction method parameter is the object of the custom class, then calls the start method (automatically calling the run method).
Written on one line is thread t = new thread (New mythread()) start();
Example:

Two threads execute alternately
In fact, the static proxy mode is adopted
definition
Proxy Pattern is a structural pattern of objects. Proxy Pattern provides a proxy object for an object, and the proxy object controls the reference to the original object.
The agent mode will not change the original interface and behavior, but transfer the agent to do something, and the agent can control the original goal. For example, the agent will only buy things, but will not change the behavior and will not make things.
classification
Static agent and dynamic agent 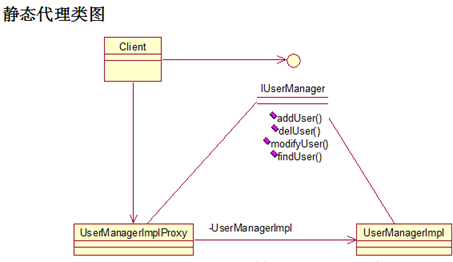 For the proxy class, we use the proxy object to do some logging, and we print the brief information to the console.

From the class diagram, we can see that the client can directly deal with the target object, and an indirect layer is added in the middle of the agent. Their functions are the same and their parameters are not changed.

Advantages and disadvantages
advantage:
1. Intuitively, static agents are real, and we write them ourselves.
2. Add in the compilation period, and specify who calls who in advance, which is efficient.

Disadvantages:
Similarly, its advantages have become its fatal disadvantages.
1. Static proxy is very troublesome and requires a large number of proxy classes. When we have multiple target objects that need proxy, I need to establish multiple proxy classes and change the original code. If we change too much, there is likely to be a problem and we must retest.
2. Repeated code will appear in every corner, which violates a principle: repetition is not a good taste. We should eliminate repetition again and again.
3. The flexibility of the system is poor when it is added in the compilation period

Compared with the two methods, the second method has less code
However, the first method is more flexible. The custom Thread class can also inherit other classes, not limited to the Thread class
It is recommended to use interfaces to implement multithreading (the first method) 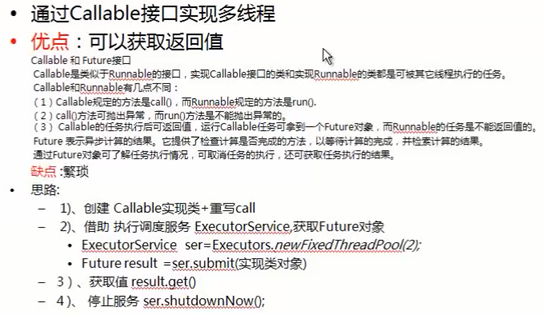 The Executor provides methods to manage termination and generate Future for tracking the execution status of one or more asynchronous tasks.
ExecutorService can be closed, which will cause it to reject new tasks. Two methods are provided to close ExecutorService. The shutdown() method allows the execution of previously submitted tasks before termination, while the shutdown now () method prevents waiting for the task to start and trying to stop the currently executing task. At the time of termination, the executor has no task executing or waiting for execution, and cannot submit a new task. Unused executorservices should be closed to allow recycling of their resources.
The method to obtain the ExecutorService instance needs the help of the static method of the Executors class

You can get the Future object through the submit method of ExecutorService.

The parameter of the submit method is the object of the custom process class
Then call the get method of the Future interface to get the return value object.

If you want to stop the thread, call the ExecutorService's shutdown now method

Even if the code of the run method is executed, if the shutdown now method is not called, the thread still does not stop.
Using method 1, the thread ends when the code is executed
Example: Tortoise rabbit race: