Note: this resource can be obtained in WeChat official account: Kevin learning station. 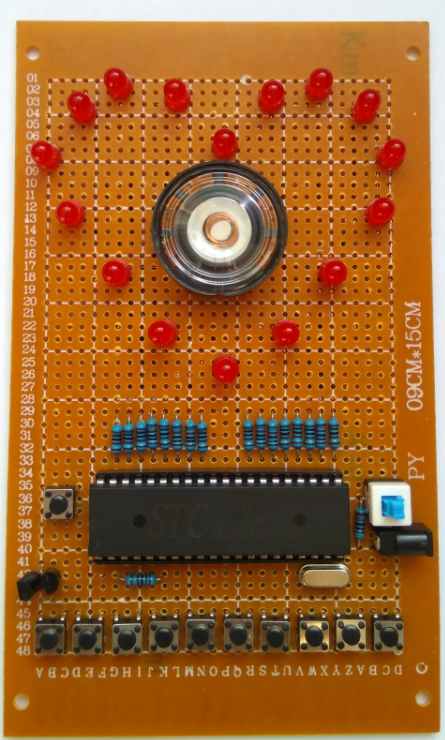 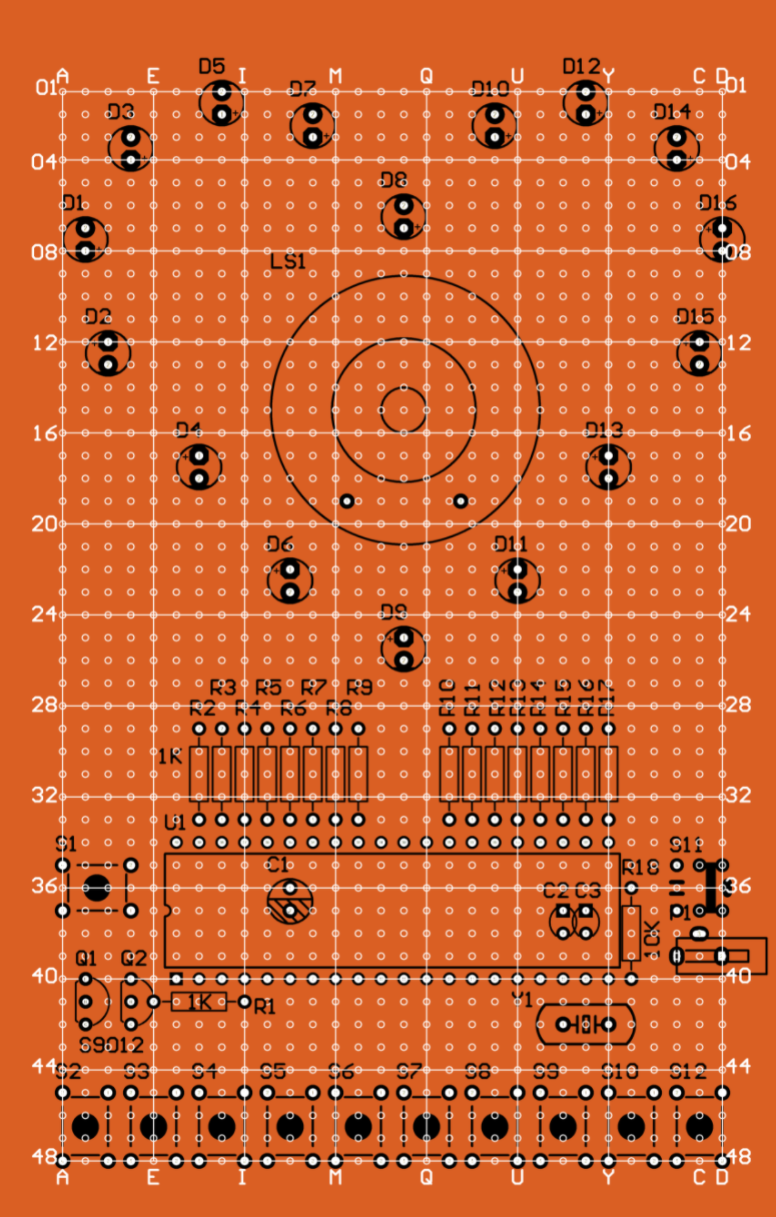 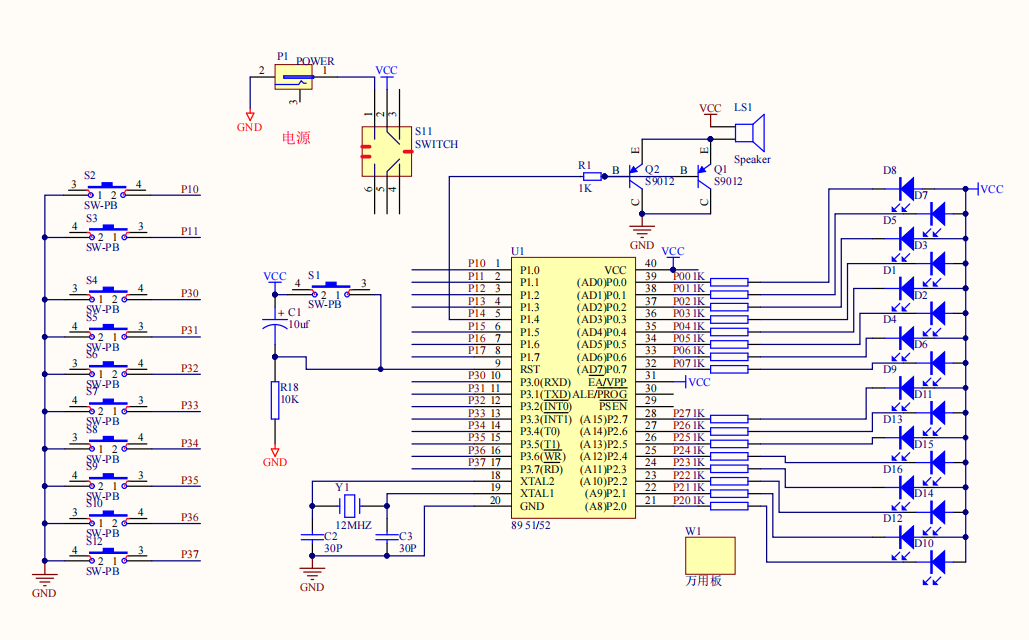 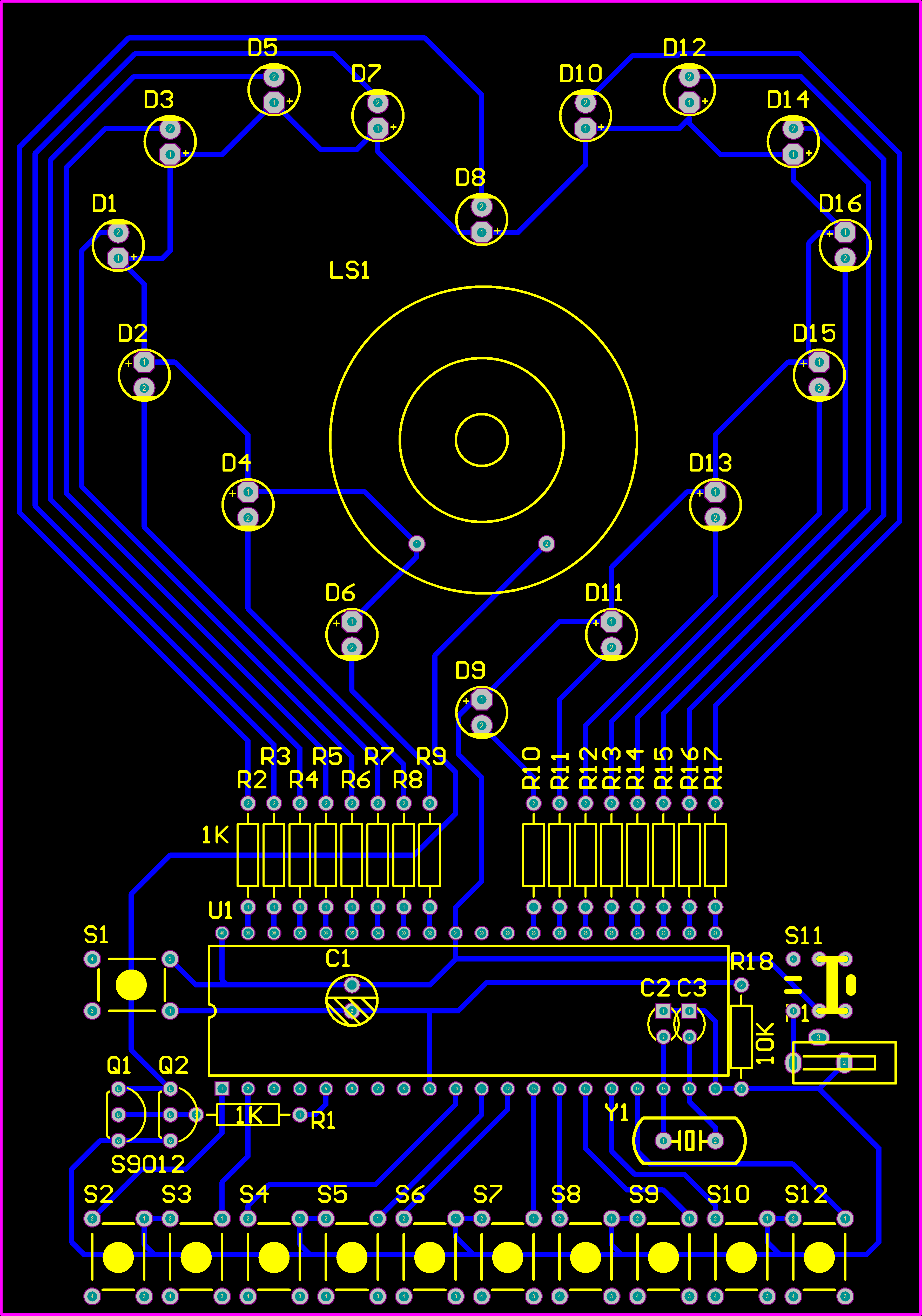 2.1 basic design idea of the system

This design is to display the change of light on the LED light, and the loudspeaker plays the music. The circuit includes: keyboard, MCU and LED display circuit, sound circuit.

2.1.1 description of each part

(1) The keyboard is used to play music with eight keys and eight notes.

(3) The signals sent by the single chip microcomputer are decoded by the LED display circuit, and finally displayed by the speaker in the LED small lamp and sound circuit.

To generate audio pulse, the main processing process is completed in the CPU. The CPU will read the data of the note input signal at any time. After reading the value of the corresponding register, the CPU processes the read value, and then plays the music through the speaker through the I/O port.

According to the design requirements, the system is mainly composed of controller module, display module and input module. In order to better realize the functions of each module, we have designed the following schemes and demonstrated them respectively.

Scheme 1: Lingyang series single chip microcomputer is used as the controller of the system

Sunplus series single chip microcomputer can realize various complex logic functions, with large module and high density. It integrates all devices on one chip, reduces the volume and improves the stability. Sunplus series single chip microcomputer improves the processing speed of the system and is suitable for being the control core of large-scale real-time system.

Scheme 2: 51 series is used as the system controller

Because the price of 51 single chip microcomputer is much lower than that of Lingyang series, and this design does not need high processing speed, from the perspective of economy and convenient use, scheme 2 is selected in this design.

The sound module is the most important part of this design.

Basic scheme: the generation circuit is the most important part of the design circuit. It plays an important role in amplifying and outputting the sound signal generated by the single chip microcomputer. The sound generation circuit in my design is mainly composed of two CS9013. CS9013 is a low-power amplifier tube, which belongs to NPN triode. The following methods are used to judge the triode pin.

2. Measure emitter E and collector c of triode. After the base of the triode is determined, measure the resistance between E and c poles twice by exchanging the probes. If the two measurement results are not equal, the one with the smaller resistance is e pole with the red probe and the black probe is c pole. For the PNP type triode, the method is similar to that of NPN, except that the red and black probes have the opposite effect. When measuring the resistance between E and c poles, it should be noted that the V (BR) CEO of the triode is very small, so it is easy to breakdown the emitter junction.

When the pin judgment of our triode is finished, we can use two triodes to form a Darlington structure. First of all, when the P1.0 port of the single chip microcomputer outputs a high level, the Darlington composed of two triodes can be turned on, which can amplify the current to a certain extent. In this way, when the signal is transmitted to the speaker, we can listen more clearly. 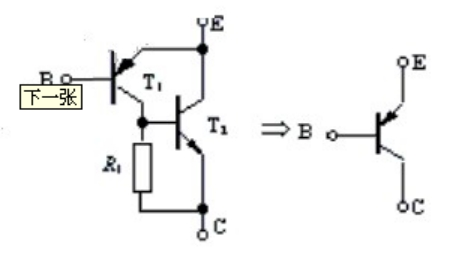 Assembly language instructions are expressed by some memory aids with corresponding meanings. Therefore, it is easier to master and use than machine language, but on the other hand, it directly uses CPU resources, which is difficult to master compared with high-level programming language.

Compared with other high-level languages, C language has the main characteristics of richness of operators, flexibility of syntax expression, compatibility with software and hardware operation, novelty of input and output mode and so on In depth analysis and study of these characteristics can deepen the understanding of C language; These features can be applied flexibly and effectively to solve various problems

Because I didn't have a deep understanding of assembly language in college, and I always used C language in programming, so I chose scheme 2.

After repeated demonstration, the following scheme is finally determined:

(1) STC89C51 single chip microcomputer is used as the main controller.

(2) The Darlington effect is used to amplify the music signal 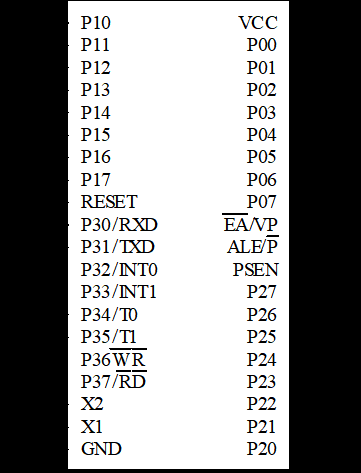 STC89C51 has a high gain inverting amplifier used to form the oscillator. Pins RXD and TXD are the input and output of the amplifier respectively. The clock can be generated internally or externally. The internal clock will not be described in detail here. The clock circuit of external mode is shown in Figure 3. RXD is grounded and TXD is connected to external oscillator. There are no special requirements for external oscillation signals, only the pulse width is required to be guaranteed. Generally, square wave signals with a frequency of about 12MHz are used. 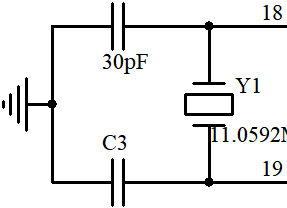 In addition to power on reset, sometimes you need to press the key to reset manually. This design is to use the key to reset manually. There are two manual reset modes: level mode and pulse mode. The level reset is realized by connecting the RST (9) terminal with the power supply Vcc. The key manual reset circuit is shown in Figure 4. When the clock frequency is 11.0592MHZ, C is 10uF and R is 10k Ω. 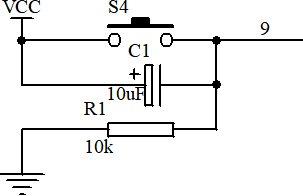 The electronic organ is equipped with 11 keys, of which 8 are used as note input. The 8 keys represent 8 notes respectively, including all notes of the midrange segment, which are designed by software and hardware. The other three are control reset, water lamp conversion and automatic music playback. 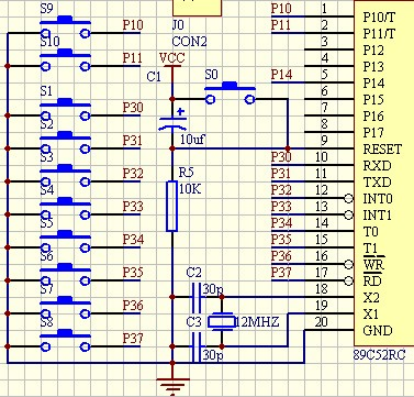 The playback module is composed of two triodes. The triode amplifies the signal and then transmits it to the horn. The horn has almost no noise and good sound effect.

The following figure shows the circuit of the module:

The design scheme is to press the note to be expressed at will through the key, which is sent to the main circuit as the level. The central processor outputs the note through recognition and decoding, and sends out effective sound in the speaker. In this way, we can continuously play the notes or tones we want. The circuit is composed of reset circuit, indicator circuit and function key circuit. Through the function key, we can choose to play music or play syllables. The hardware is mainly composed of the following parts. 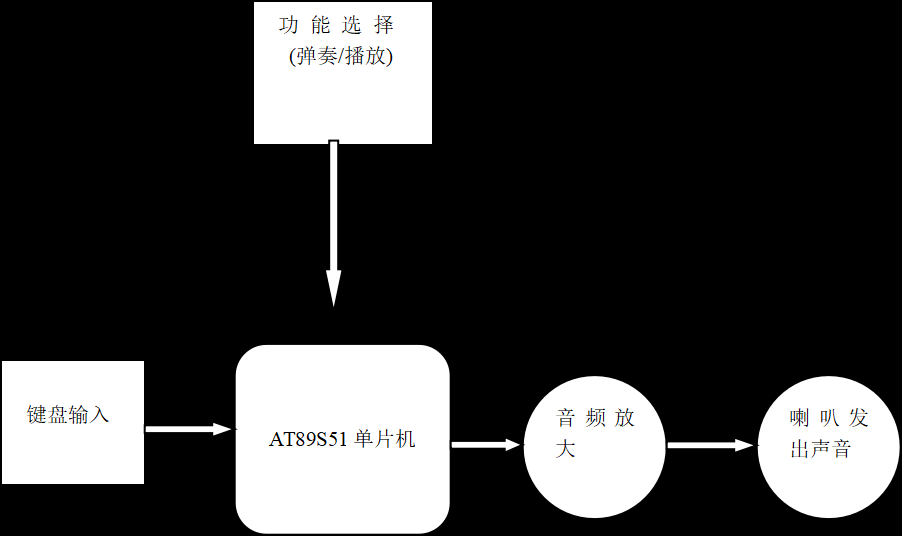 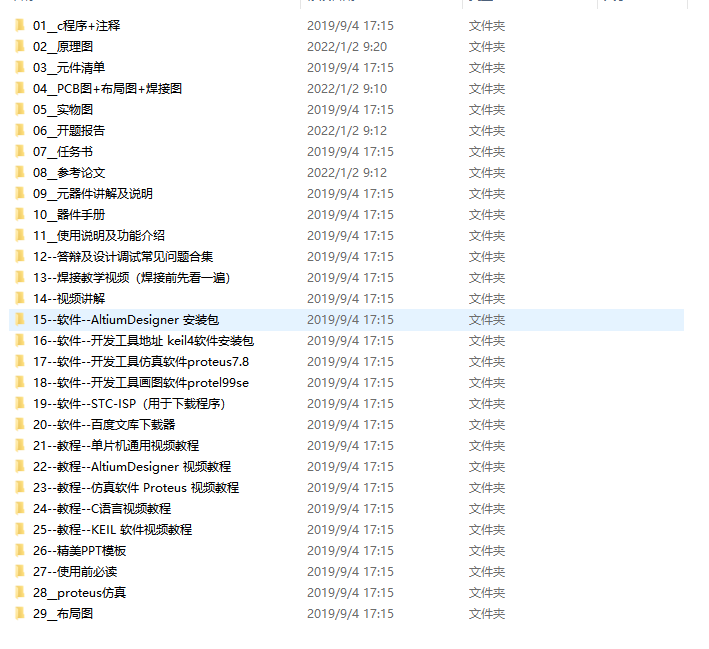 The project simulation and PCB project have been placed in the official account below, and can be concerned about the official account: Kevin learning station, and input key words: "acoustic and electronic organ", which can be obtained free of charge. It's not easy to create, but your praise, attention and collection are my greatest encouragement!