The low bit of the figure in this paper should actually be on the right, but in order to improve the reading experience, the author changed the low bit to the left.

BitMap, translated as BitMap, is a data structure that represents a Dense Set in a finite field. Each element appears at least once, and no other data is associated with the element. It is widely used in indexing, data compression and so on (from Wikipedia entries). In the computer, 1 byte = 8 bit s. A bit (bit, called bit or bit) can represent two values of 1 or 0. A bit is used to mark the value of an element, and KEY or INDEX is the element to form a mapping diagram. Because bit is used as the unit of underlying data storage, it can greatly save storage space. 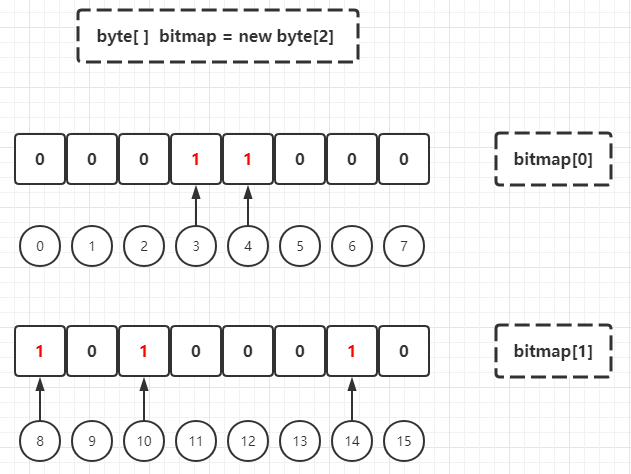 In Java, an int type integer accounts for 4 bytes and 16 bits. The maximum value of int is more than 2 billion (specifically 2147483647). Suppose there is a requirement to judge whether an integer m exists among 2 billion integers. It is required that the memory used must be less than or equal to 4GB. If each integer is stored by int, 2 billion * 4byte /1024/1024/1024 is required to store 2 billion integers, which is about 7.45GB, which obviously can not meet the requirements. If BitMap is used, only 2 billion bit memory is required, that is, 2 billion / 8 / 1024 / 1024 / 1024 is about 0.233GB. In the case of a large amount of data, the data set has a limited state, so BitMap storage and subsequent calculation can be considered. Now assume that the byte array is used as the underlying storage structure of BitMap, and initialize a BitMap instance with a capacity of 16. The example is as follows: 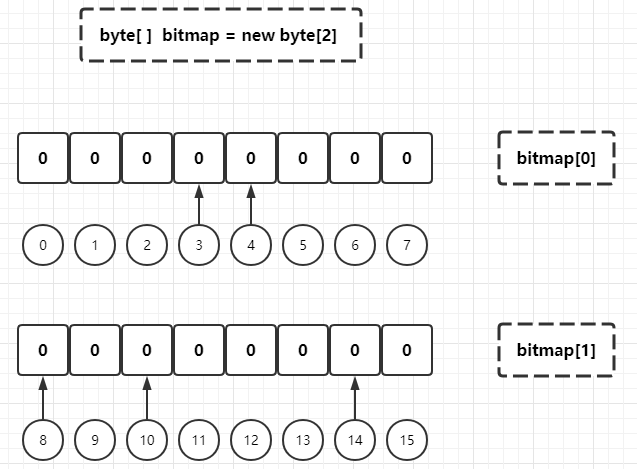 It can be seen that the current byte array has two elements: bitmap[0] (virtual subscript [0,7]) and bitmap[1] (virtual subscript [8,15]). Here, it is assumed that the BitMap instance constructed above is used to store the customer ID and customer gender relationship (bit 1 represents male and bit 0 represents female), and the male customer with ID equal to 3 and the female customer with ID equal to 10 are added to the BitMap: 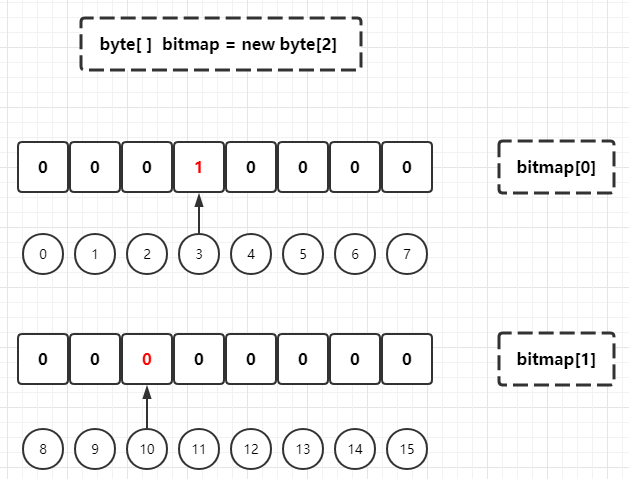 Then judge the gender of customers with customer ID 3 or 10 respectively: 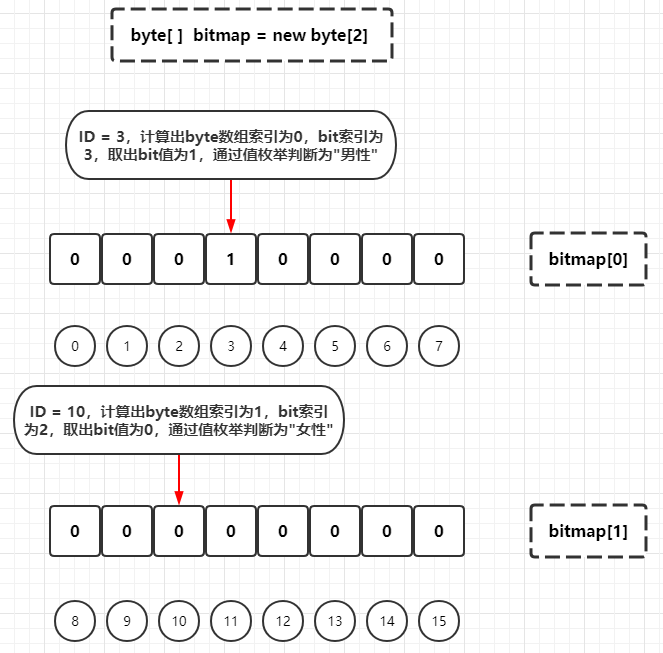 If a male user with customer ID 17 is added at this time, since the old BitMap can only store 16 bits, it needs to be expanded. Judge that only one byte element (byte[2]) needs to be added to the byte array: 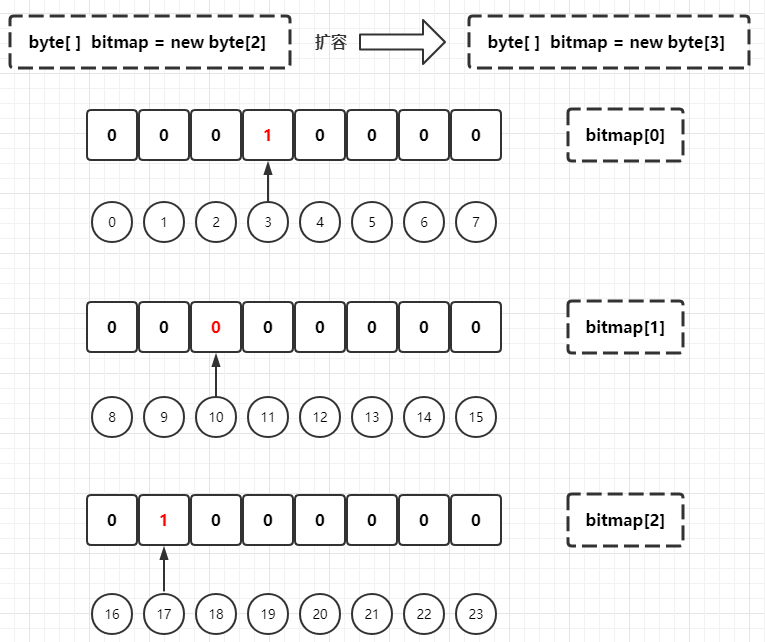 In principle, the bottom byte array can be continuously expanded when the length of byte array reaches integer MAX_ Value, the capacity of BitMap has reached the maximum value.

BitSet easy to use

java. util. Although BitSet is called Set in name, it is actually the BitMap implementation built in JDK. 1 this class is a very old class. From the annotation, it is jdk1 0, but most methods are jdk1 Newly added or updated after 4. The example in the previous section makes a Demo based on BitSet:

The API is relatively simple to use. In order to meet other scenarios, BitSet also provides several practical static factory methods for instance construction, range setting and clearing bit values and some set operations. There are no examples here. It will be expanded in detail when analyzing the source code later.

As mentioned earlier, if BitMap uses byte array storage, when the logical subscript of the newly added element exceeds the maximum logical subscript of the initialized byte array, it must be expanded. In order to reduce the number of capacity expansion as much as possible, in addition to defining the initialized underlying storage structure according to the actual situation, we should also select a data type array that can "carry" more bits. Therefore, in BitSet, the underlying storage structure selects a long array. A long integer accounts for 64 bits and the bit length is 8 times that of a byte integer, In scenarios with a large range of data to be processed, the number of capacity expansion can be effectively reduced. In order to simplify the analysis process, we will use as few elements as possible to simulate the changes of the underlying long array. There are some notes on the design at the top of BitSet, which are briefly listed and summarized as follows:

According to the habit of analyzing source code in the past, first look at all core member properties of BitSet:

Next, let's look at some auxiliary methods of BitSet:

Then look at BitSet constructor and static factory method:

The source code of the constructor here is not very complex, but the static factory method BitSet valueOf(ByteBuffer bb) is cumbersome. Here is an example:

The process is as follows:

Next, look at the conventional set, get and clear methods:

Let's simulate the process of the set method:

Next, let's look at the methods related to set operation:

Here, the process of and method is simulated:

The nextSetBit(int fromIndex) method first finds the words array element where the fromIndex is located, and then retrieves it later if it is not satisfied. A classic use example is also given in the annotation of this method. Here is an excerpt:

Problems not solved by BitSet

ADDRESS_ BITS_ PER_ The choice of word size is determined purely by performance considerations is also mentioned in the field notes of word. The basic addressing value 6 here is selected because the long array is selected at the bottom layer to reduce the expansion times of the bottom array as much as possible. However, there is a contradictory problem here. It seems that there is no way to find data types whose bit width is larger than long and occupy memory space equivalent to long in JDK. For example, byte and String (the bottom layer is char array) will far exceed long in capacity expansion times. Because the bottom layer is an array storage structure and does not limit the lower and upper boundaries of the elements in the array, too much useless memory space will be wasted in some specific scenarios. By modifying the example mentioned above, if you want to add all integers between 1 billion and 2 billion to the BitSet instance (these values are marked as 1 in the corresponding logical bit index of BitSet), in the underlying bit table of BitSet instance, the value of logical index [0,1 billion] will be the initialization value 0, that is, about half of the words[N] will be 0, This part of memory space is completely wasted. In the actual business scenario, most of the time, the business primary key does not use the self increasing primary key of the database, but uses the numerical primary key with self increasing trend generated by algorithms such as snowflag. If the benchmark timestamp defined by the algorithm is relatively large, the generated value will far exceed the upper limit of int type (carried by long type). That is, the problems not solved by BitSet are as follows:

For problem 1, consider making a simple mapping. Suppose [Integer.MAX_VALUE + 1,Integer.MAX_VALUE + 3] need to be stored in BitSet instance, and [1,3] can be actually stored. After processing, use long realindex = (long) bitindex + integer MAX_ Value restores the actual index value, which can logically expand the storage range of BitSet, and guess that it can meet more than 99% of the scenarios:

For question 2, there is a ready-made implementation, that is, the class library RoaringBitmap. The warehouse address is: https://github.com/RoaringBitmap/RoaringBitmap . The class library is used by many big data components of Apache and can stand the test of production environment. Import dependencies as follows:

Learning and analyzing the source code of BitSet is to better deal with the operation between a large number of data sets in a limited state in the actual scene. There is a matching scene in the author's business. If there is an opportunity later, it will be expanded in detail in another practical article.