It is a set of instructions written in a certain language to complete characteristic tasks. That is, static code, static objects

A process is an execution of a program, or a running program. It is a dynamic process with its own process of emergence, existence and extinction - life cycle

The program is static and the process is dynamic

Process is the unit of resource allocation. The system will allocate different memory areas for each process at run time

A process can be subdivided into threads, which is an execution path within a program

If a process executes multiple threads in parallel at the same time, it supports multithreading

Thread is the unit of scheduling and execution. Each thread uses an independent running stack and program counter (pc). The overhead of thread switching is small

Multiple threads in a process share the same memory unit / memory address space. They allocate objects from the same heap and can access the same variables and objects. This makes the communication between threads easier and more efficient. However, system resources shared by multiple threads may bring security risks 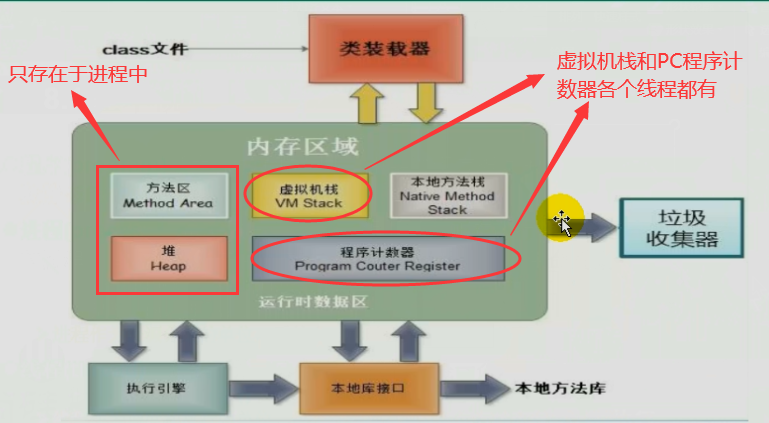 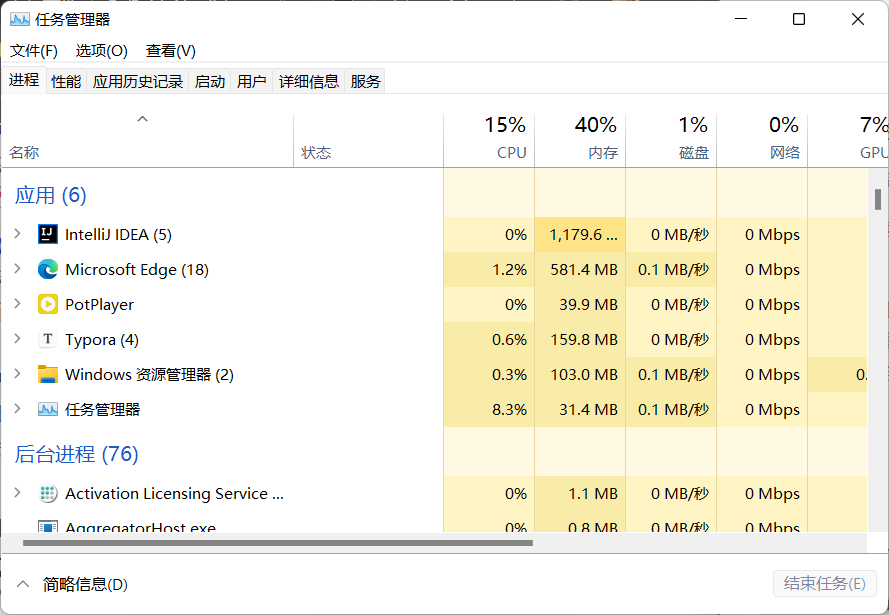 The above figure shows the processes running on my computer. The running software (a set of instructions written to complete characteristic tasks) is a process (an execution process of the program). For example, my IDEA can open multiple windows, that is, the IDEA supports threads (an execution path inside the program)

Single core CPU is a fake multithreading. In a time unit, only one thread can be executed, but the CPU runs faster and can't feel it.

If it is multi-core, it can give better play to the efficiency of multithreading. (today's servers are multi-core)

1. Improve application response. It is more interesting for the graphical interface and can enhance the user experience

3. Improve the program structure. The long and complex process is divided into multiple threads, which is allowed in the calf, which is conducive to understanding and modification

7. When multithreading is required

The program needs to be implemented -- when some tasks need to wait, such as user input, file read-write operation, network operation, search, etc

When you need some programs running in the background

2, Creation and use of threads

The JVM of the Java language allows programs to run multiple threads, which is embodied by the java.lang.Thread class.

Thread(Runnable target): Specifies the target object to create the thread, which implements the run method in the Runnable interface

3. There are two ways to create threads in API

There are two ways to create a new execution thread before JDK15:

The implementation is as follows:

1. If you call the run() method manually, it's just a normal method and does not start the multithreading mode.

2. The run () method is called by the JVM. When it is called and the process control executed are determined by the CPU scheduling of the operating system.

3. To start multithreading, you must call the start method.

4. A thread object can only call the start() method once to start. If it is called repeatedly, the above exception "lllgalThreadStateException" will be thrown

1) Defines the implementation class of the Runnable interface

2) Reproduce the run method of the interface

5) Start the Thread by calling the start method through the Thread, and call the run method in the Runnable implementation class

4. Connection and difference between inheritance and Realization

The limitation of single inheritance is avoided
Multiple threads can share the object of the same interface implementation class, which is very suitable for multiple same threads to process the same resource.

void start(): starts the thread and executes the run() method of the object

run(): the operation performed by the thread when it is scheduled

String getName(): returns the name of the thread

static Thread currentThread(): returns the current Thread. this is in the Thread subclass, which is usually used for the main Thread and Runnable implementation class

If there are no threads with the same priority in the queue, this method is ignored

Make the current active thread give up control over the CPU within the specified time period, so that other threads have the opportunity to be executed, and re queue when the time comes.
Throw InterruptedException exception

stop(): force the end of the thread lifetime. It is not recommended

boolean isAlive(): returns boolean to judge whether the thread is still alive

Priority level of the thread

When a thread is created, it inherits the priority of the parent thread
Low priority only has a low probability of obtaining scheduling, and is not necessarily called after high priority threads

Threads in Java are divided into two categories: one is daemon thread and the other is user thread.

They are the same in almost every way, and the only difference is to judge when the JVM leaves.
Daemon threads are used to serve user threads. By calling thread.setDaemon(true) before the start() method, a user thread can be turned into a daemon thread.
Java garbage collection is a typical daemon thread.
If there are daemon threads in the JVM, the current JVM will exit.
Image understanding: the rabbit dies and the dog cooks, and the birds hide

When the birds are gone, the bow will be hidden; After the rabbits were killed, the hounds were useless and cooked.

To implement multithreading, you must create a new Thread object in the main Thread. The Java language uses the objects of Thread class and its subclasses to represent threads. In a complete life cycle, it usually experiences the following five states:

New: when the object of a Thread class or its subclass is declared and created, the new Thread object is in the new state
state
Ready: after the thread in the new state is started (), it will enter the thread queue and wait for the CPU time slice. At this time, it has been started
The conditions for operation are met, but the CPU resources are not allocated
Run: when the ready thread is scheduled and obtains CPU resources, it enters the running state, and the run() method defines the line
Operation and function of the process
Blocking: in a special case, when the input / output operation is suspended or executed artificially, the CPU is released and temporarily suspended
Stop your own execution and enter the blocking state
Dead: the thread has completed all its work, or the thread is forcibly suspended in advance or terminated due to an exception

When multiple threads operate and share data together, the operation will be incomplete and the data will be destroyed

When multiple threads operate to share data, one thread only executes part of the statements, and the other thread also participates. Can cause errors in shared data

When a thread operates on shared data, it cannot continue until it has finished operating on other threads

Java provides a professional solution to this problem: synchronization mechanism

Synchronous and asynchronous, for example, five guests come to a restaurant. Synchronous means that the first one to order dishes and order a fish. OK, the chef goes to catch and kill fish. After half an hour, the fish is ready for the first guest and the next guest. Come one by one in this order

Similarly, asynchrony means to come to the first guest, order something, order fish, give it a brand and let him wait. The next guest then orders, and after ordering, let the cook do it. Whichever dish is good first comes out first,

2.synchronized can also be placed in the method declaration, indicating that the whole method is a synchronous method.

The implementation is as follows

In Thinking in Java, it is said that for concurrent work, you need some way to prevent two tasks from accessing the same resources (in fact, shared resource competition) . the way to prevent this conflict is to lock a resource when it is used by a task. The first task accessing a resource must lock the resource so that other tasks cannot access it before it is unlocked. When it is unlocked, another task can lock and use it.

What is a synchronized lock?

Any object can be used as a synchronous lock. All objects automatically contain a single lock (monitor).
Lock of synchronous method: static method (class name). class), non static method (this)
Synchronous code block: you can specify it yourself, and it is often specified as this or class name

It is very important to ensure that multiple threads using the same resource share a lock, otherwise the security of shared resources cannot be guaranteed

2. How to solve it?
(very important)
For statements with data shared by multiple operations, only one thread can complete the execution. During the execution, other threads cannot participate in the execution.
That is, all these statements that operate on shared data should be placed in the synchronization range

The scope is too small: not all code with security problems is locked

Too wide range: it does not play the function of multithreading.

Operation that does not release the lock

When a thread executes a synchronization code block or synchronization method, the program calls Thread. sleep() and Thread.yield() methods to suspend the execution of the current thread

After a deadlock occurs, there will be no exception or prompt, but all threads are blocked and cannot continue

ReentrantLock class implements Lock. It has the same concurrency and memory semantics as synchronized. ReentrantLock is commonly used in thread safety control, which can explicitly add and release locks.

Note: if there is an exception in the synchronization code, write unlock() to the finally statement block

It can be understood as alternation

wait(): suspend the current thread, abandon the CPU, synchronize resources and wait, so that other threads can access and modify shared resources. The current thread queues up for other threads to call notify() or ntifyll() method to wake up. After waking up, it can continue to execute after regaining ownership of the monitor.

notify(): wakes up the thread with the highest priority waiting for synchronization resources and ends the wait

notifyAll(): wakes up all threads queued for resources and ends waiting

These three methods can only be used in the synchronized method or synchronized code block, otherwise java.langlegalmonitorstateexception will be reported.

Callable is more powerful than Runnable

Compared with the run() method, you can have a return value
Method can throw an exception
Return values that support generics
You need to use the Future Task class, for example, to get the returned results

You can cancel the execution results of specific Runnable and Callable tasks, query whether they are completed, obtain results, etc.
FutrueTask is the only implementation class of Futrue interface
FutureTask also implements Runnable and Future interfaces. It can be executed by the thread as Runnable or get the return value of Callable as Future

Examples are as follows

Frequently create and destroy resources that are heavily used, such as threads in concurrency, which has a great impact on performance

Create multiple threads in advance, put them into the thread pool, obtain them directly when using them, and put them back into the pool after use. It can avoid frequent creation, destruction and reuse. Similar to public transport in life

corePoolSize: the size of the core pool

keepAliveTime: when the thread has no task, how long will it last at most and then terminate