1, Inheritance access test
Design member functions or variables of class A with different attributes such as public, protected and private;
Class B inherits A through public, protected, private and other ways, and tests the member function or variable accessing A in the member function of class B;
Add member functions or variables with different attributes such as public, protected and private to class B, and test and access each member function or variable of B externally;
B inherits A in A private way and tries to promote some public members in A to public.
2, Friend class inheritance test
Design Class A contains private variable a, and friends in class A are given to class C;
Design class B inherits a and adds private variable B; Test and access the member variables A and B of class B in class C;
Design Class D to inherit C, test and access the member variables a of class A and a and B of class B in the member function of D.
3, Comprehensive application of polymorphism
General polymorphism function: the input and output parameters are exactly the same, and virtual is added to the parent class;
Special polymorphism function: the input or output parameters are the pointer of the parent class or the reference of the base class in the subclass, and the pointer of the subclass or the reference of the subclass in the subclass;
Polymorphism of destructor;
Multi inheritance, pay attention to what needs virtual inheritance;
Design vector graphics, using multi inheritance design combination graphics, requires the ability to create different types of vector graphics, select graphics, move graphics, display graphics with different colors (indicating whether it is selected or not), and manage graphics with vector or array.
4, Job submission method
The above related functions are completed through the design of experiments, and the completion process and experimental results are recorded in the blog, especially the points of attention emphasized in class, problems encountered and corresponding solutions.

First, look back to the concept of library. Library is written, existing, mature and reusable code. In reality, every program depends on many basic underlying libraries. It is impossible for everyone's code to start from scratch, so the existence of libraries is of extraordinary significance.

Let's talk about the difference between dynamic and static. Generally speaking, when compiling the code that calls the library; Whether libraries are compiled into programs is the essential difference between them. From the difference of use, the static library has been compiled into the program, so the executable program can run independently; The dynamic library only specifies the directional functions in the library at compile time, so the executable program cannot run independently when used. But look the other way around; From the perspective of software development update and maintenance, the dynamic library is more conducive to use, while once the static library is updated, the whole program needs to be recompiled, which is not conducive to maintenance.

In this experiment, the implementation of vector graph will depend on the corresponding dynamic library.

In this experiment, inheritance, an important concept of object-oriented programming, will be involved. This concept also exists in java. In C + +, inherited attributes are divided into three types: public, protected and private; They can be called public, protected and private respectively. Inherited classes are often called parent classes (base classes), while classes generated by inheritance are often called subclasses (derived classes).

The following will design a simple small example to illustrate. The function part is not specially designed. It can simply return variables of the corresponding category.

Firstly, the three attributes of public protected private are explained from the example of test1 in one class; Inside the class, all functions and variables are freely accessible. When external references are declared, only public classes can be accessed, that is, only public1 and publicfunction can be used.

For public inheritance of test2:

For protected inheritance of test3:

For private inheritance of test4:

The above three differences can be explained from the differences between test5 and test6. For example, the access in test5 is legal, but not in test6.

After the above description, of course, there will be some usage scenarios; If it is necessary to enable some subclasses to access the parent class attributes with cross permissions, use can be used at this time; For example, public 1 can be accessed across permissions in test4.

Friend is also one of the important concepts in c + +. Specific applications can be divided into friend functions and friend classes; For friend functions, the biggest task can be simply summarized as making the declaring function access the protected and private objects that cannot be accessed outside the class. As the code in test1 pasted below.

At this time, the externally defined fritest1 function can access the restricted protected and private objects.

For polymorphism, a simple example is the operator. For example, we can use the operator +. We can realize the addition operation between integer numbers, floating-point numbers and double precision types. These three types of addition operations are actually different from each other and are realized by functions with different contents. This example uses polymorphic features.

It should be noted here that the following two conditions need to be met to form polymorphism:

Correspondingly, the Func function parameter in the above example uses a reference to the parent class. The differences between the two are as follows.

The vector graphics implemented in this experiment are based on the framework of QT, which involves a special QPainter library. QPainter is the library of QT's graphics rendering system. Its specific use and cases need special learning. The author here is only for examples and has not conducted in-depth research. If necessary, please find relevant functions and use methods by yourself. 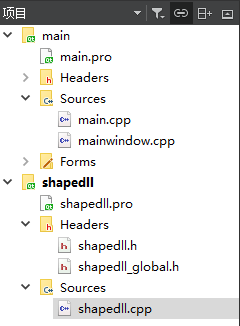 The project structure is shown in the figure above. Among them, shapell is a dynamic library, which is responsible for the implementation of vector graph; main is qt's own window program.

Due to time reasons, this experiment only realizes simple examples of point and triangle graphics.

The specific operation cannot run after the completion of the construction due to the problems in the machine qt configuration used in the experiment; Subsequent operation screenshots will be supplemented after commissioning; At the same time, there are still problems in the code of ShapeManager, which will also be modified later. Theoretically, the above code can be run directly with a few lines of simple demo code without problems.