I haven't updated the blog of C language learning for a long time. What I bring today is the knowledge points of the file part! 😋

1. Why do I need documents?

The file can help us realize the persistence of data: save the data in the disk file, and the previously saved contacts will not disappear the next time we open the address book.

A file is data with a specific format stored on disk.

What we know about this blog is data files

The file ID is often referred to as the file name

In file operation, a very important knowledge point is file type pointer, which is called file pointer for short

Each FILE has a FILE information area when opening up, which is used to save the name, status, current location and other relevant information of the FILE. This information is stored in a structure, which is declared as FILE by the system

Different C language compilers have different FILE types, but they are similar.

When opening a FILE, the system will automatically create a FILE structure variable and fill its information according to the content of the FILE. 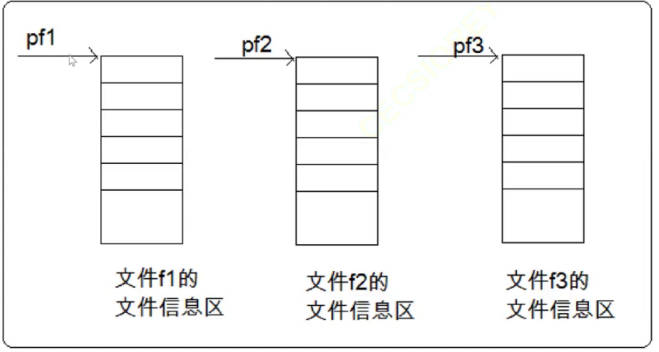 When we need to use a FILE, we can access the structure variable through a pointer of FILE type 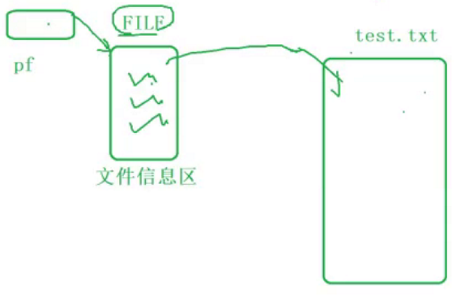 The file needs to be opened before reading and writing, and closed after use

This is similar to dynamic memory management

ANSIC stipulates that fopen function is used to open the file and fclose is used to close the file.

When opening a FILE, a pointer variable of FILE * will be returned to point to the FILE.

After closing the file, the file pointer becomes a wild pointer, which needs to be set to NULL to prevent wrong calls

strerror function is explained in this blog 👉 Point me

Through this table, we can understand the different types of file usage 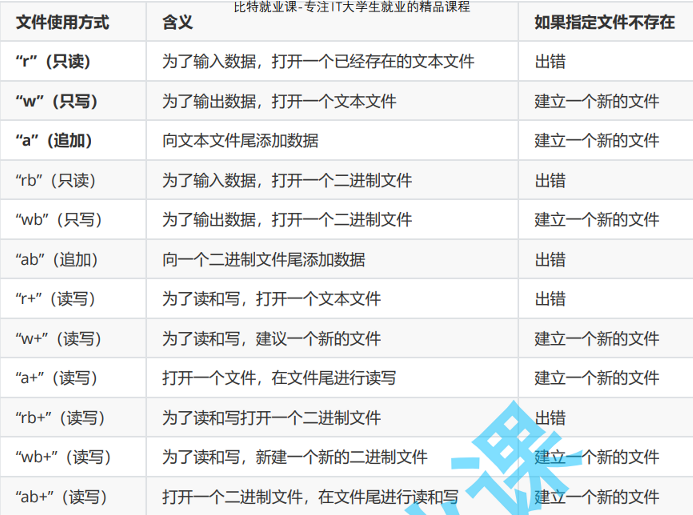 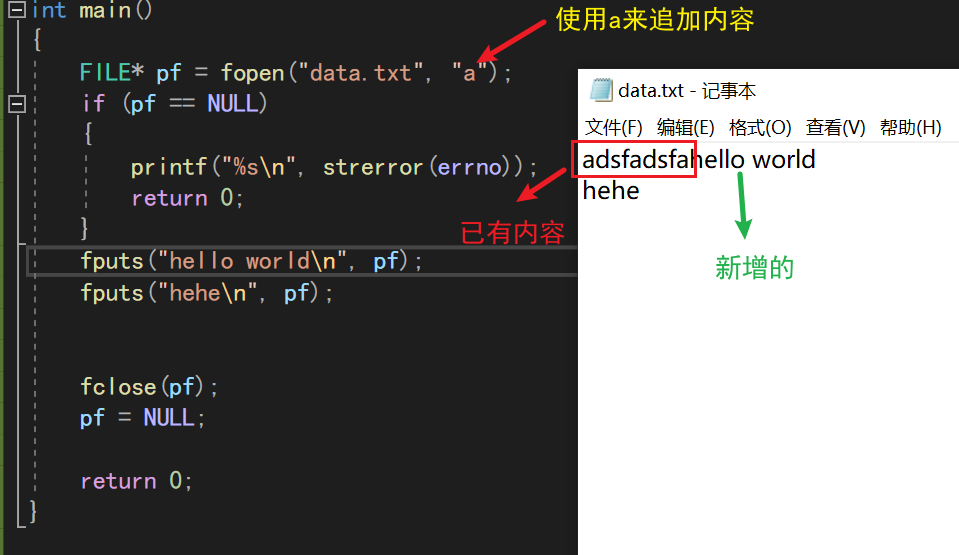 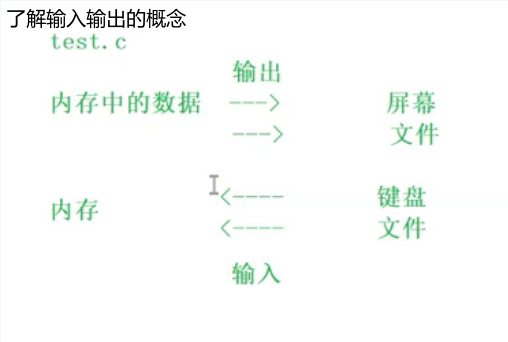 When performing input and output operations, we used to print the data printf in memory directly to the screen 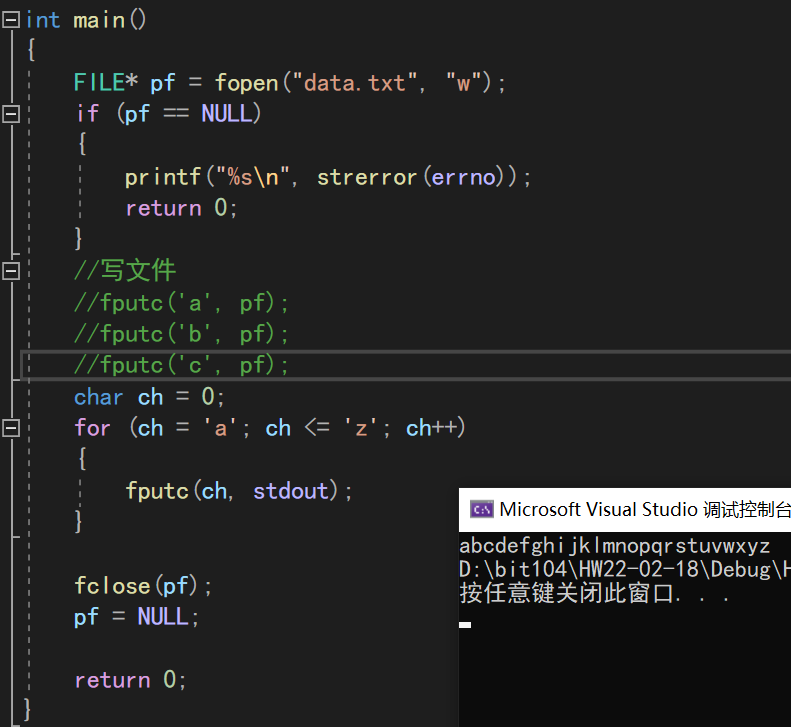 In the above code, the fputc function is used to input a character into a file

The following table lists some file functions we will use 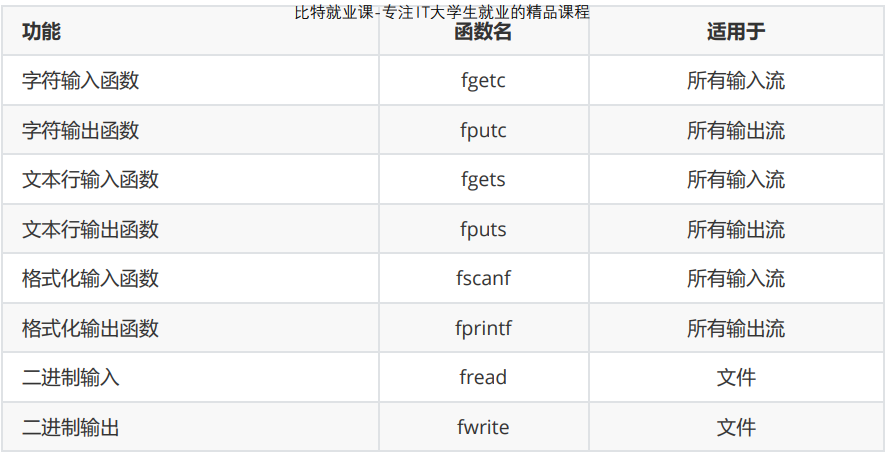 fputc function: write a single character to a file 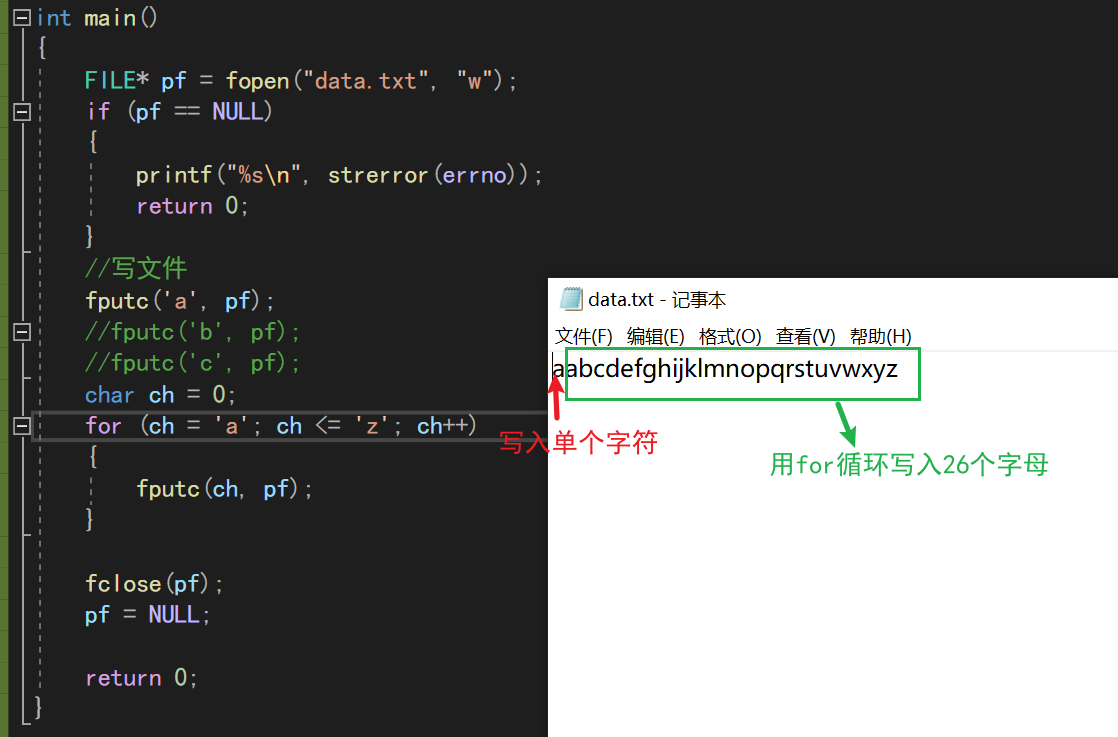 fgetc function: reads a single character from a file

As you can see, we have printed out all the characters just written in the file

Copy the contents of one file to another 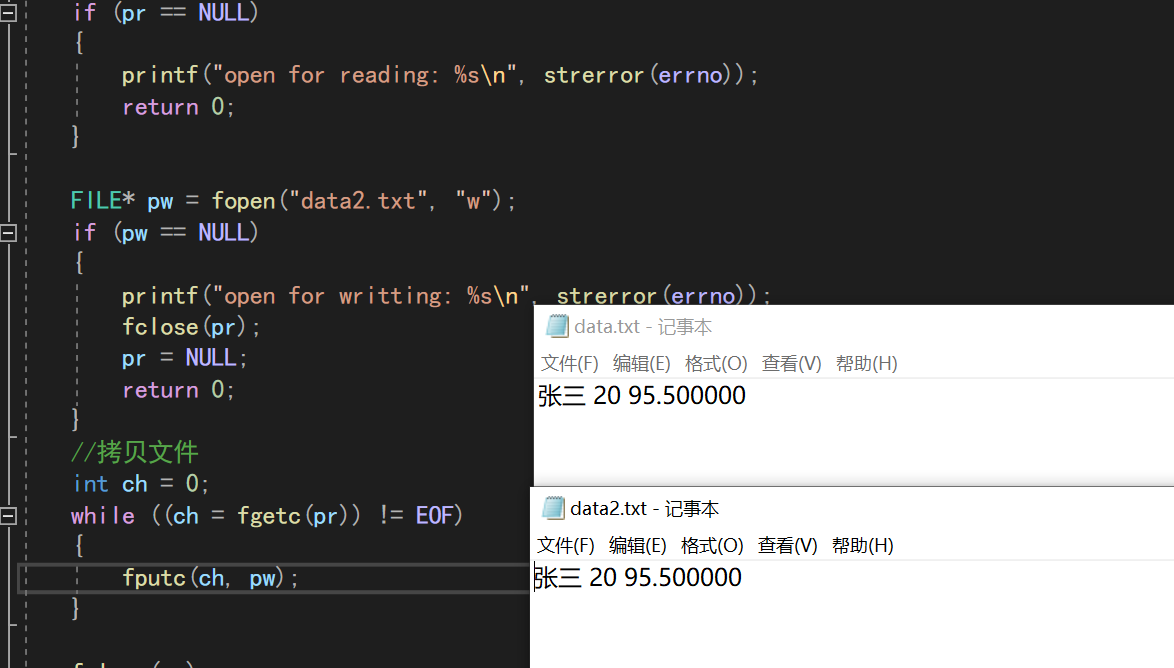 fputs function: writes a string to a file 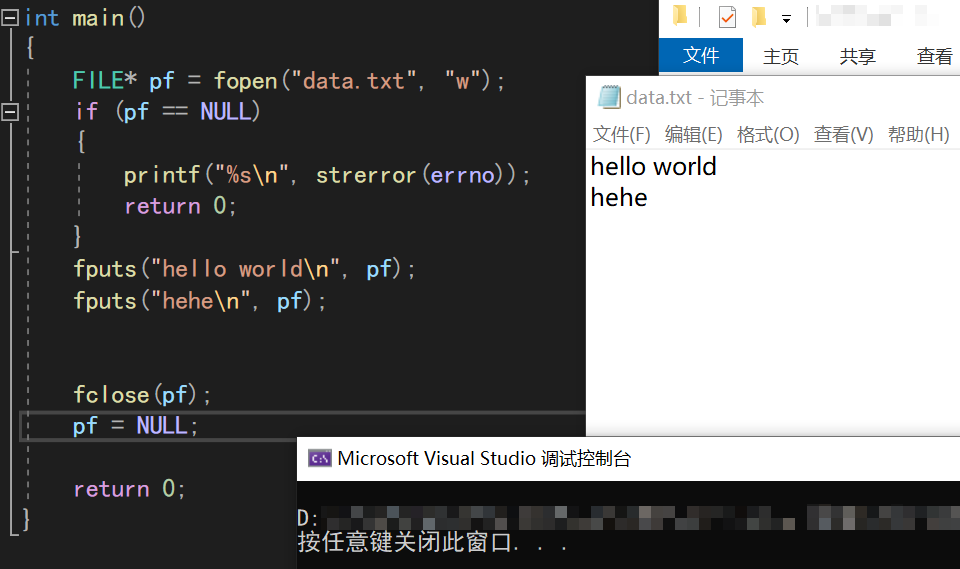 fgets function: reads a string of specified length from a file

This function has the third parameter when used, which is used to limit the length of the read string

Running the program, you can see that we set 3, but only read 2 characters 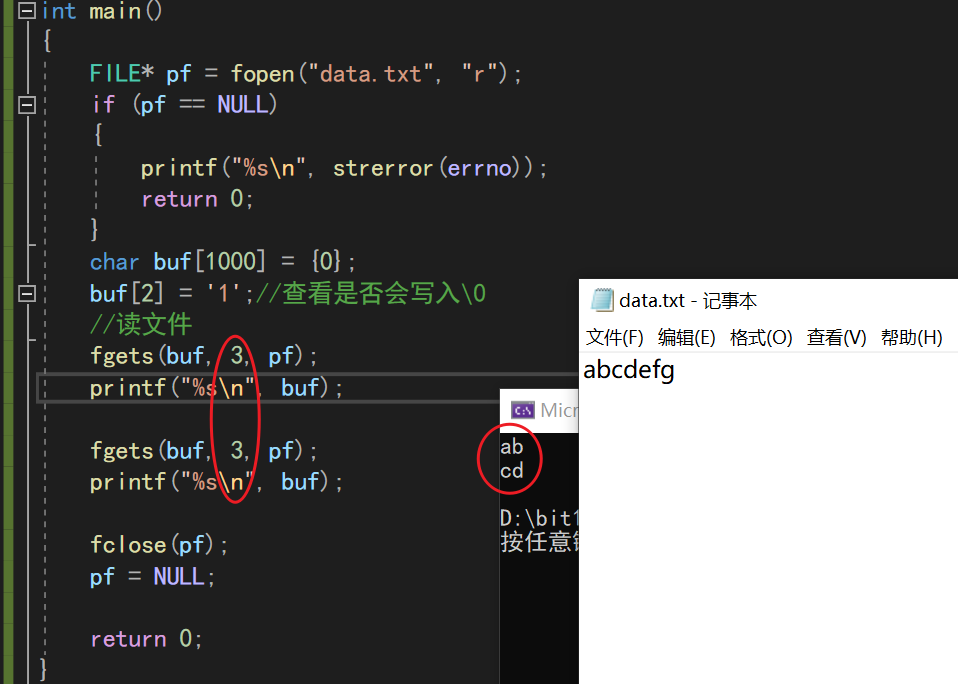 You can see that after the first fgets function is executed, the original 1 is written to \ 0 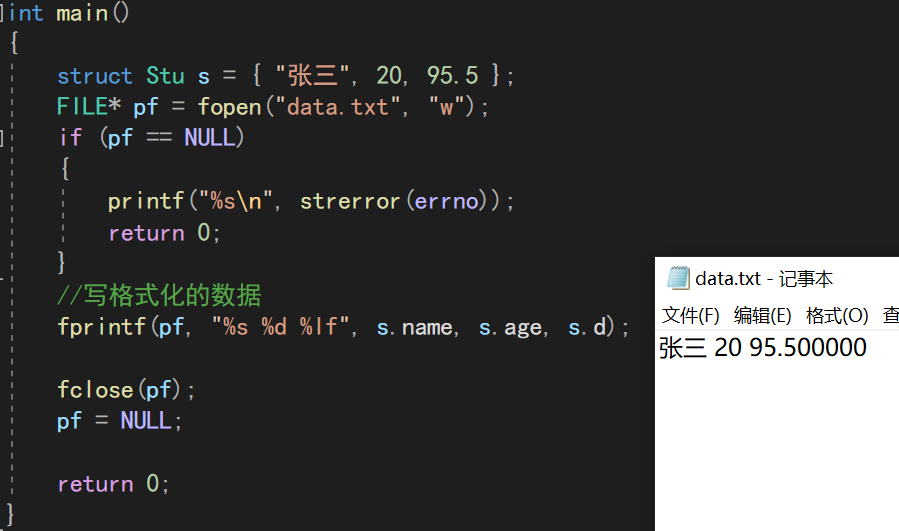 fscanf function: read the formatted data from the file and store it in the corresponding structure variable s 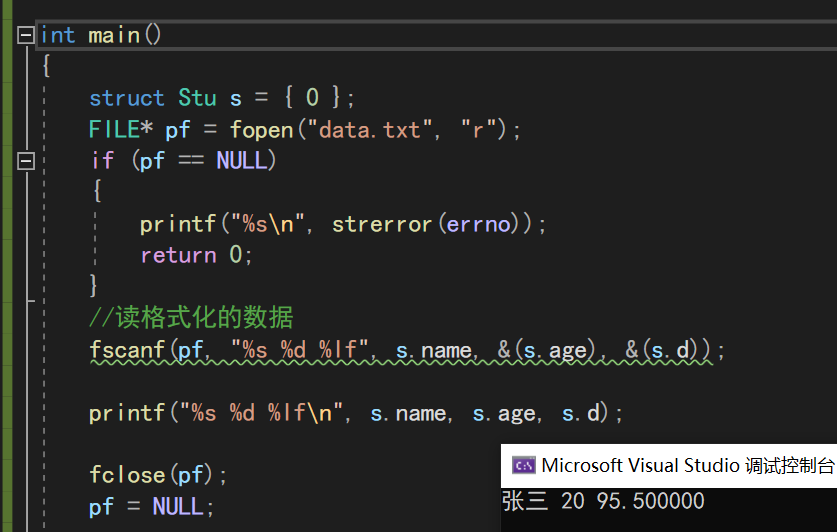 The following is an example of writing structure variables

It can be seen that the data written at this time has partially become garbled. At this time, its contents are already stored in binary, and the txt reader cannot read these data correctly

Binary reading is the step of reproduction, which reads out the binary data in the text in a specific format and puts it into the corresponding variable 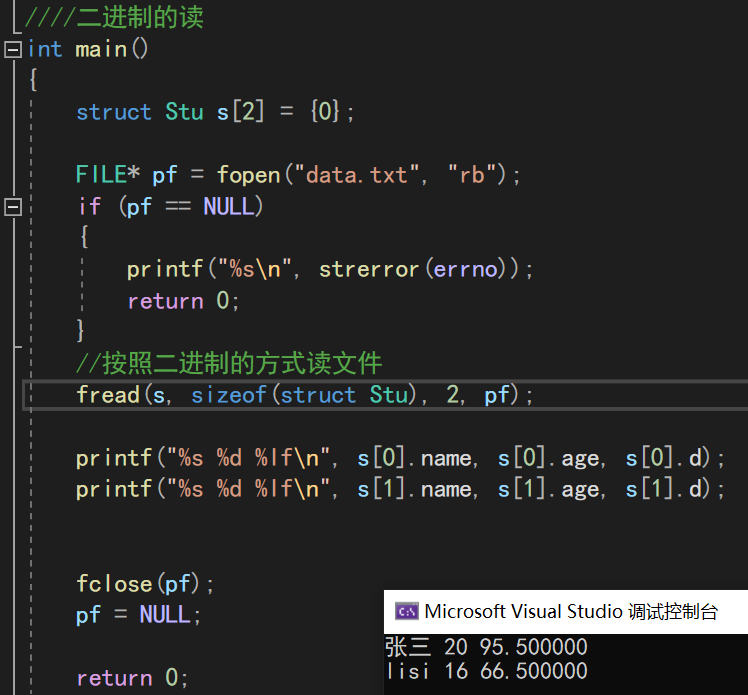 These two functions are special. Their function is to copy the formatted data (such as structure) in the file into the character array in the form of string 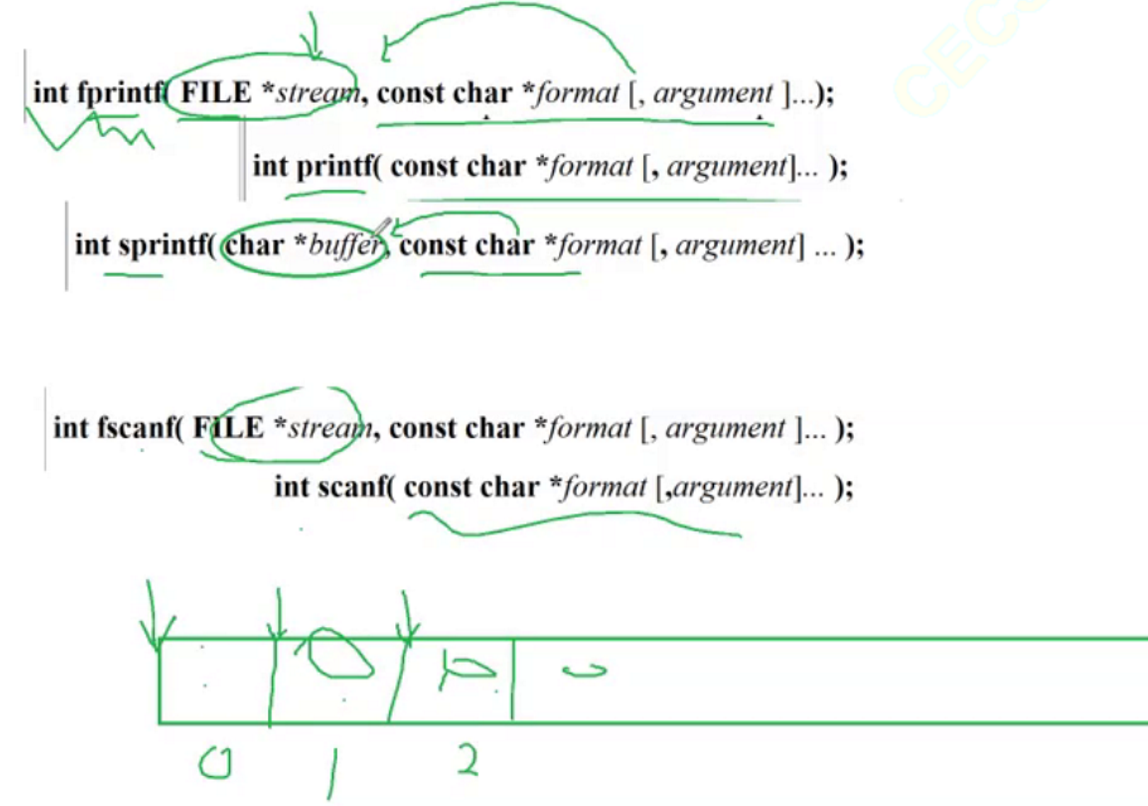 See the figure below

It sounds a little tongue twister. Just give an example

Give a string "abcdef"

If we need to point to f, let the pointer 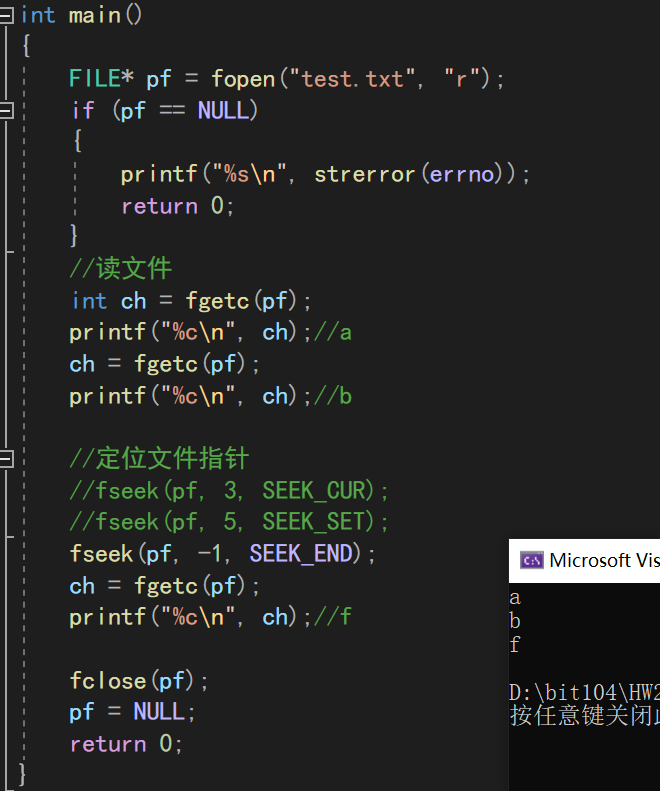 We can use this function to locate the file pointer, change it to the position we need, and perform character replacement and other operations 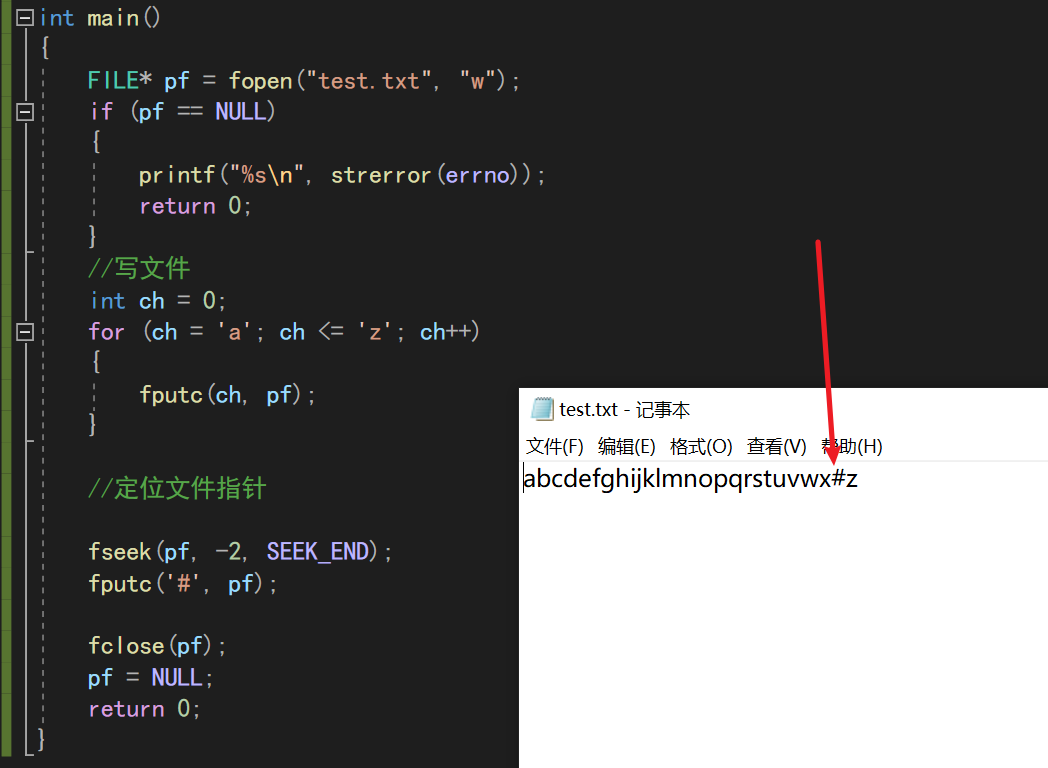 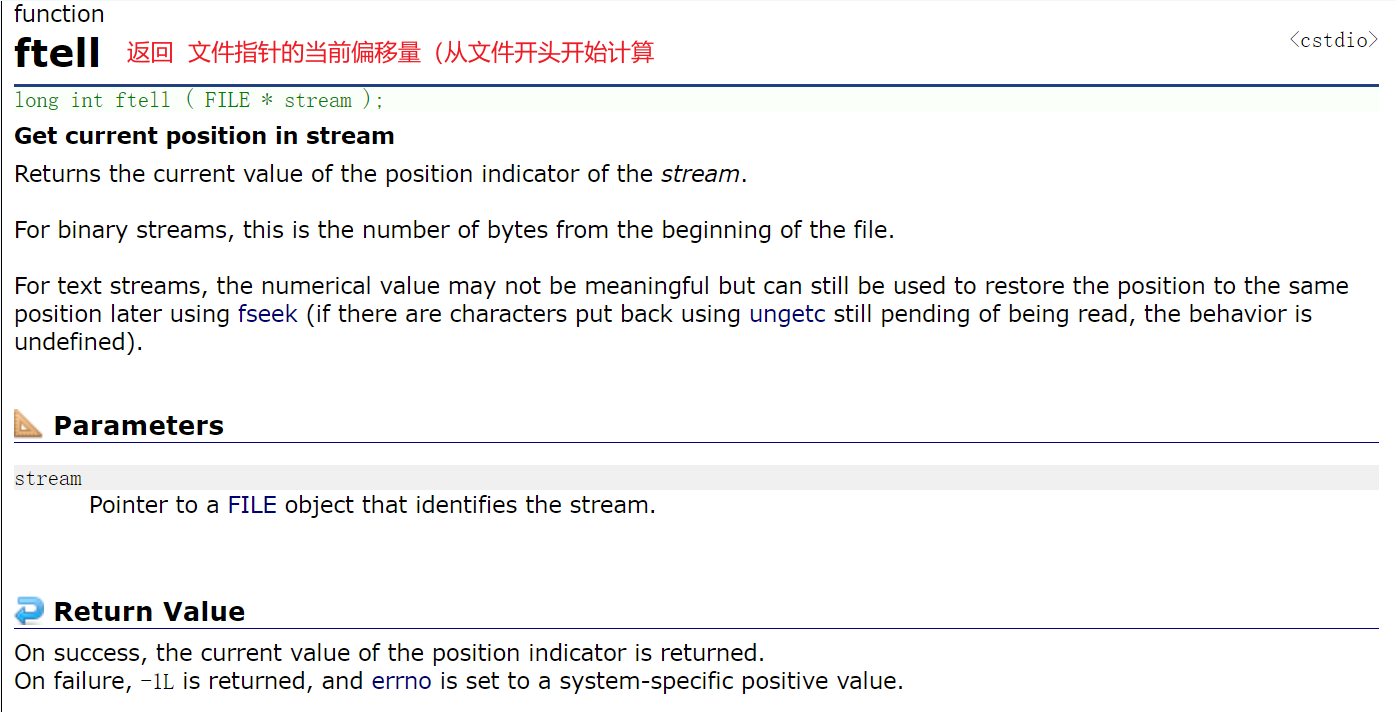 We now know that the fread/fwrite function can realize binary input and output. How do they implement them?

According to the organization form of data, data files are called text files or binary files. Data is stored in binary form in memory. If it is output to external memory without conversion, it is a binary file.

The number 10000 can be stored in the following two ways

At this time, using binary mode can save space 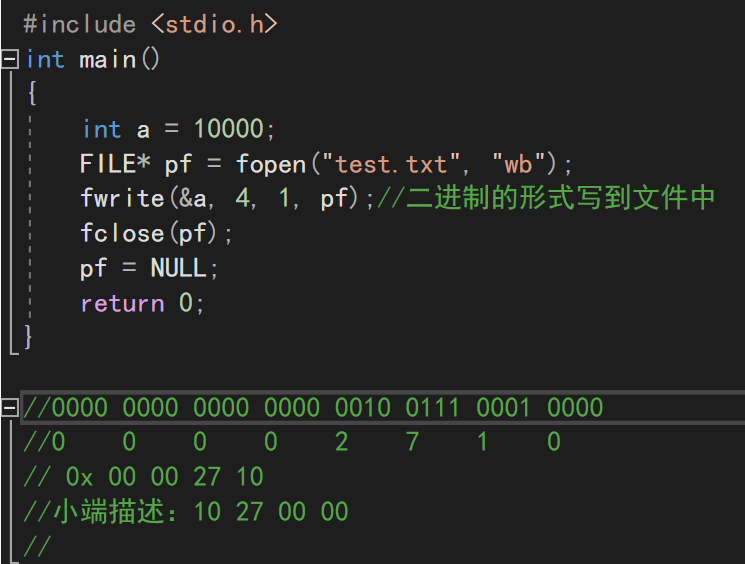 In VS, we can open test with a binary editor in a specific way Txt document

This involves the problem of large and small ends 👉 Point me

5. Determination of the end of file reading

Instead, you should use the feof function to judge whether the reading fails or ends normally at the end of the file 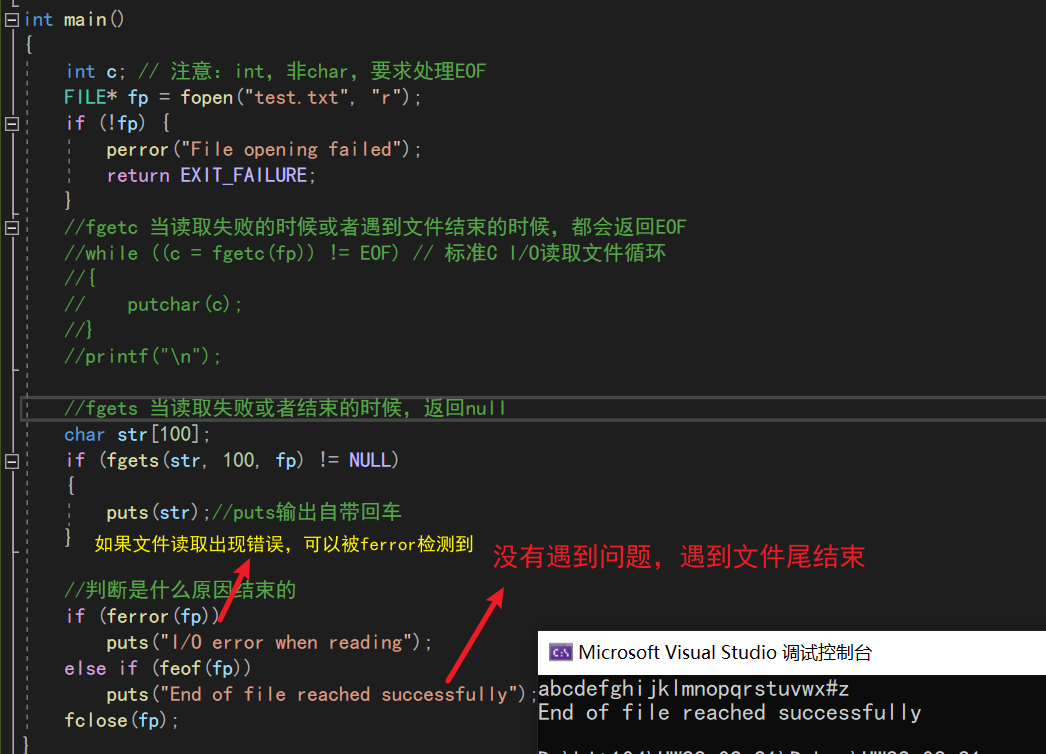 ferror function: judge whether there is a reading error in the file. If yes, return to true 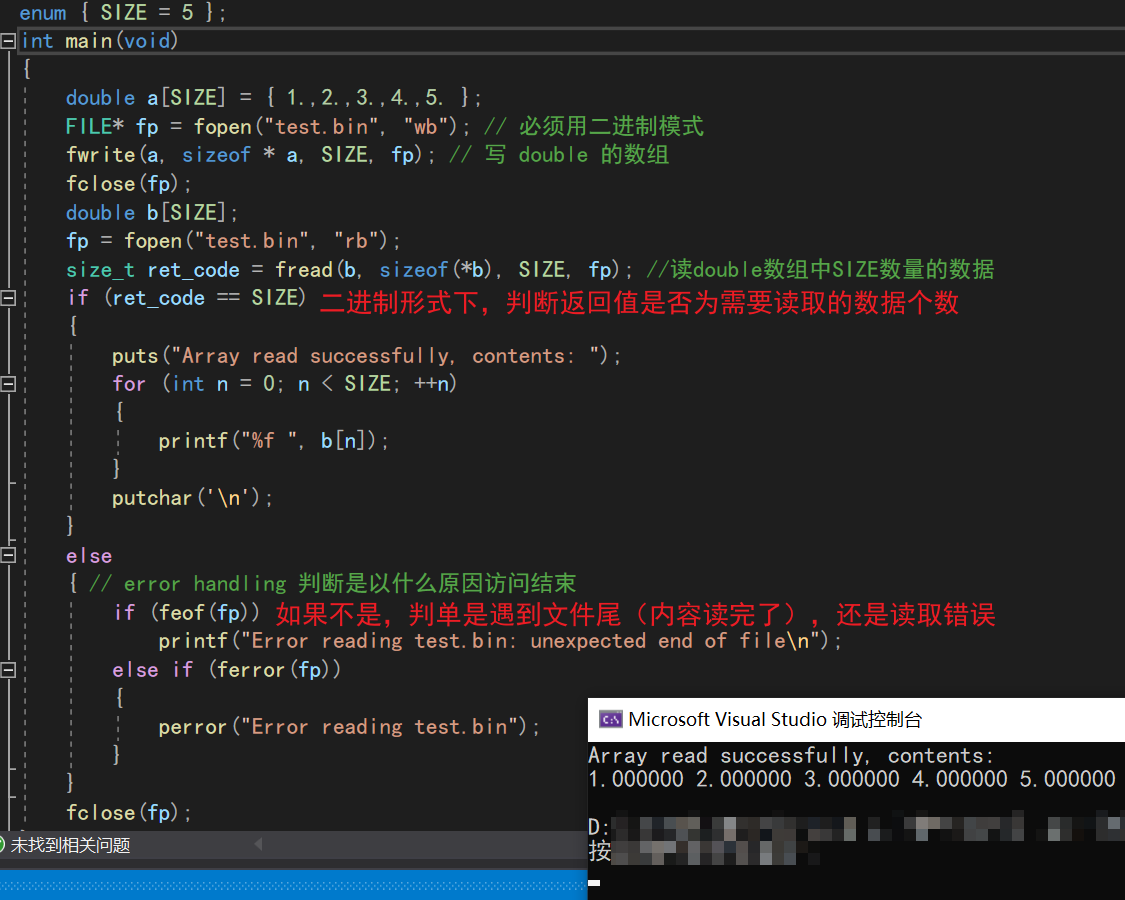 The so-called buffer file system means that the system automatically opens up a "file buffer" for each file being used in the program in memory. Data output from memory to disk will be sent to the buffer in memory first, and then sent to disk together after the buffer is filled.

Like git, this is to put the files that need to be pushed into the cache first, and then push them to the remote warehouse after confirming that the files are correct 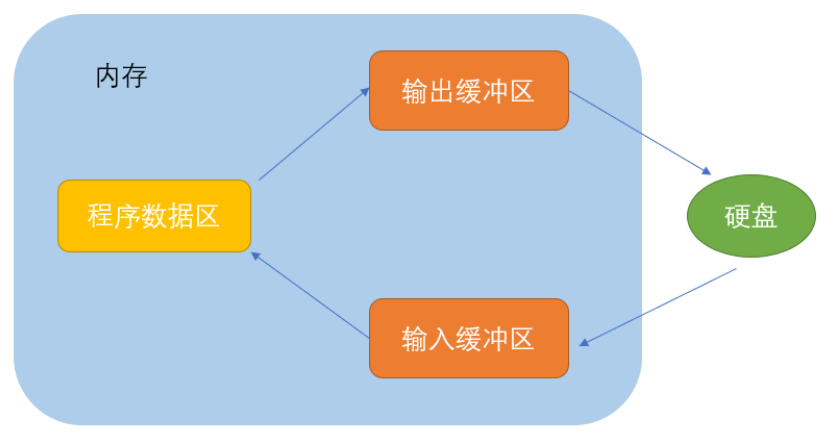 Because of the existence of buffer, C language needs to refresh the buffer or close the file at the end of file operation when operating the file. If not, it may cause problems in reading and writing files.

Run the program and pause the program through the sleep function. You can see that the initial string is not saved in the file 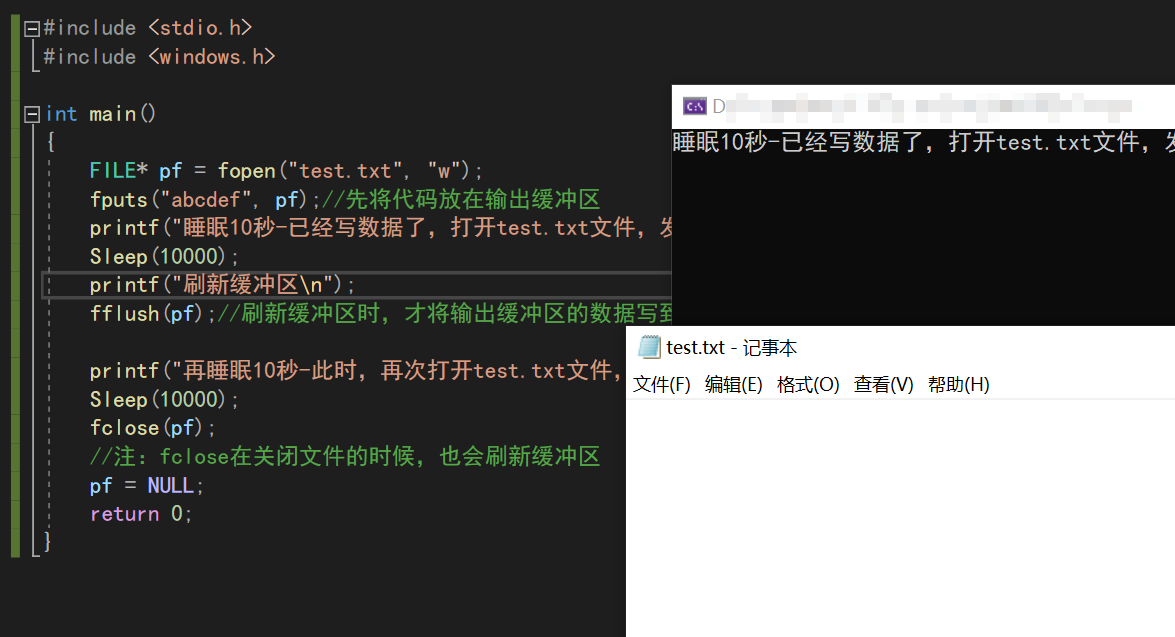 Test this code in a Linux environment (raspberry pie)

As you can see, after \ n is removed, the code will not print hehe 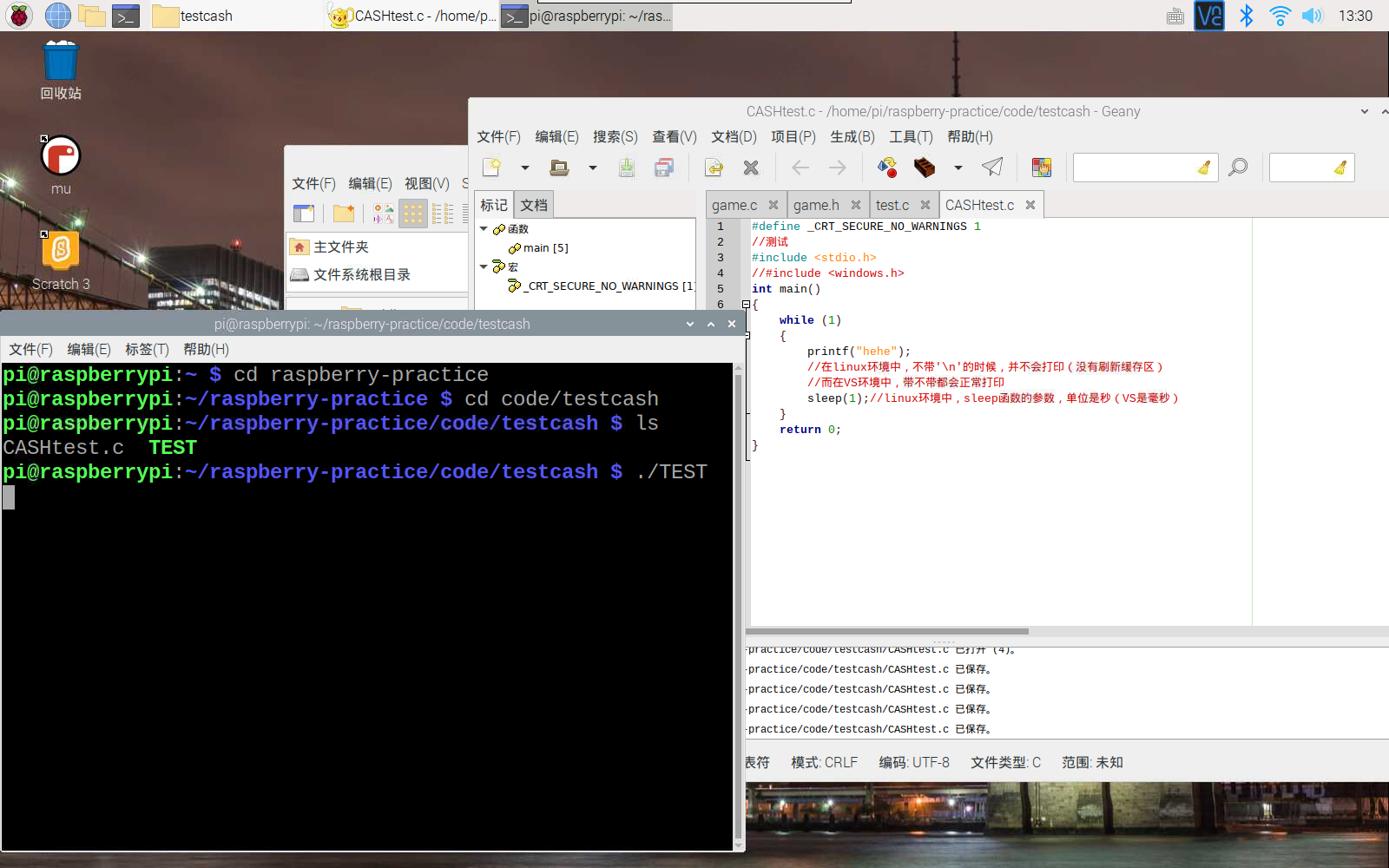 When compiling, an error is reported 👇， But the program is still compiled

Recompile and no error is reported (here hehe has been added, and the program prints normally) 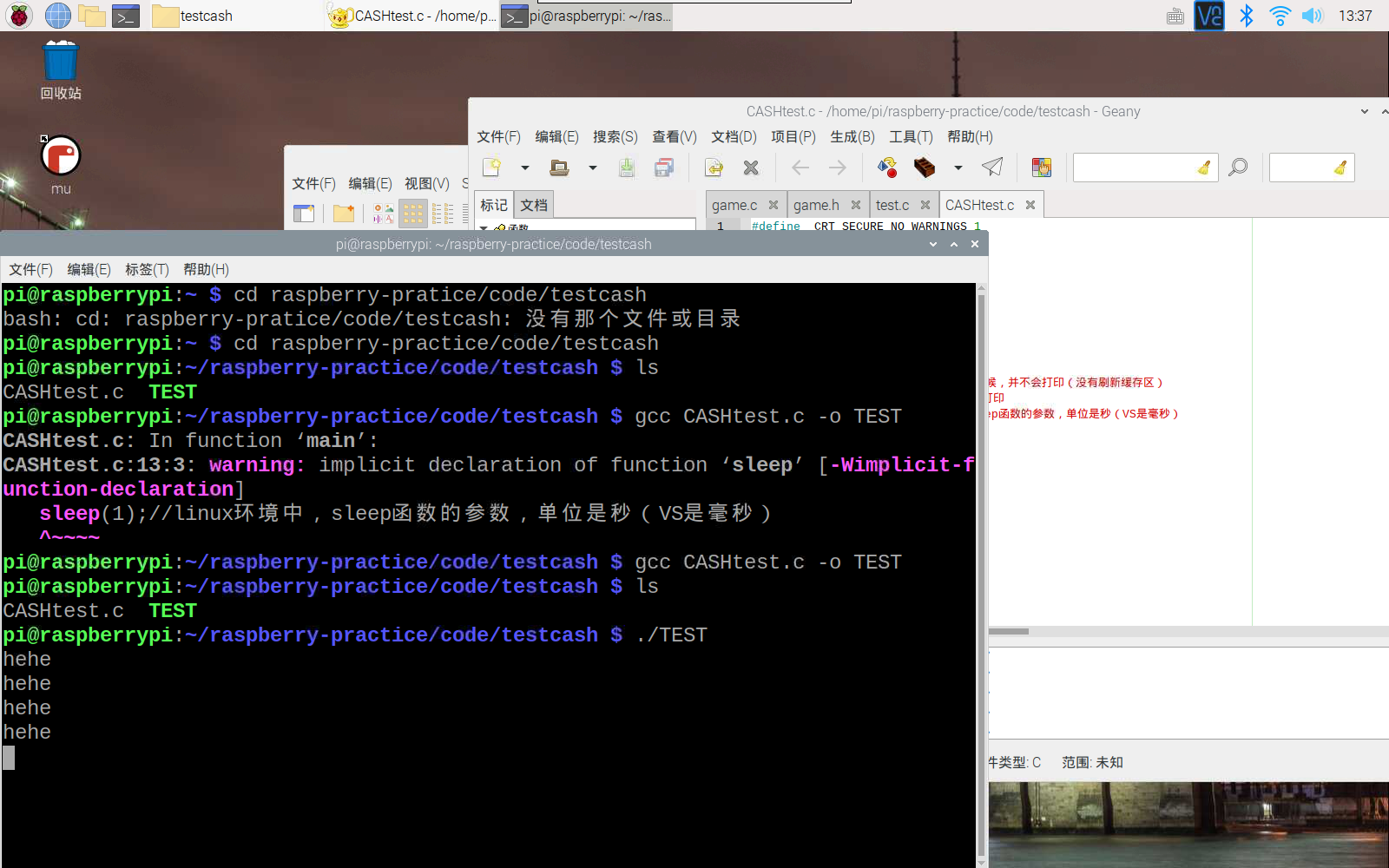 The contents of the document chapters are very rich. Have you paid the tuition! 😁

If the content is wrong, please correct it ruthlessly!