1. Runtime automatic allocation and automatic recycling: the stack is automatically managed, and programmers do not need manual intervention. Convenient and simple.
2. Reusability: there is actually that space in the program in the stack, and the program uses this space repeatedly.
3. Legacy: due to repeated use of stack memory, the program will not clean up after each use, so it is still the value left in the last stack when using the stack.
4. Temporary: (the function cannot return the pointer of the stack variable because this space is temporary).
5. Overflow: because the operating system gives the size of the stack in advance, if the stack is allocated endlessly in the function, the memory can always be used up.

How to allocate and free memory size?

In c language, we often use malloc to allocate the memory size (but you should not allocate more memory than the system memory size, otherwise you will report an error. The general system memory size is 4G. As for why, readers can baidu this reason, I won't talk about it here), and use the free function to release the previously allocated memory size.
void *malloc(size_t size);
void free(void *ptr);
explain

Some details of malloc usage:

malloc(0) (this is meaningless, but I'd like to share it). Malloc's application for 0 bytes of memory itself is a nonsense. Generally, this need will not be met. If malloc(0) returns NULL or a valid pointer? The answer is: a 20Byte memory is actually allocated and the address of this memory is returned. This answer is not certain, because the C language does not specify the performance of malloc(0), which is defined by the implementer of each malloc function library (this test does have different results in different environments).

When compiling the program, the compiler divides all the elements in the program into some components, and each part forms a segment, so the segment is a component of the executable program.

1. What is a code snippet

2. What is a data segment

3. What is a bss segment

Difference and relation between data segment (. Data) and bss segment:

4. Some special points to pay attention to

a. Some special data will be put into the code segment

Result: segment error
explain
char *p = "linux" is used in C language; When defining a string, the string "linux" is actually assigned to the code segment, that is, the "linux" string is actually a constant string rather than a variable string.

b. Global variables and static local variables explicitly initialized to non-zero are placed in the data segment

c. Global variables that are not initialized or explicitly initialized to 0 are placed in the bss segment

It is used temporarily inside the function. If it is not used outside the function, local variables are defined. Heap memory and data segments have almost identical properties and can be completely replaced most of the time. But the life cycle is different. The life cycle of heap memory starts from malloc to free, while the global variable starts from the execution of the whole program and will not disappear until the end of the whole program, which is accompanied by the life of the program. Revelation: if your variable is only useful at one stage of the program, it will not be used up. It is suitable for heap memory; If this variable itself is associated with the program for a lifetime, it is suitable to use a global variable. (heap memory is like renting a house, and data segment is like buying a house. Heap memory is like borrowing books from the library, and data segment is like buying books in your own bookstore.) you will gradually find that buying is better than renting, and heap memory is more widely used than global variables. Here is an example demonstration 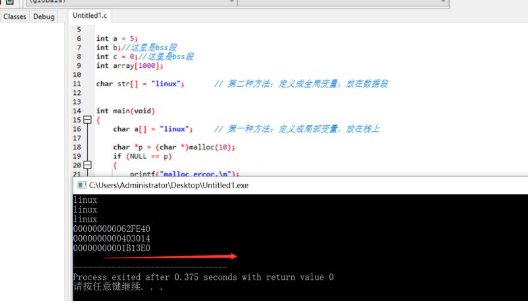