How to save data?

It's good to use pointers. You can't save them one by one

The parameters accepted by the constructor are the object (Reference) of its own class, which is constructed for copy.

=Overloaded, the parameter is the object of its own class, which is copied.

As long as you write a class with a pointer, you must complete these two functions. For the class complex without pointer, it is the same if it is not written. The compiler will faithfully copy the bit completely, which is very good. However, pointers cannot be copied and space should be reallocated.

Shallow copy is pure bit copy, resulting in memory leakage and alias; Deep copy is to recreate and assign the content pointed by the pointer.

The constructor here is implemented externally.

The writing method is similar to the constructor, with the same name as the class, and there is a ~

When the object of this class dies and leaves the scope, it will be called (automatically).

For classes with pointers, destructors should be used to process dynamically allocated space (manually).

To write a global function,

Stack is a memory space in the scope of a function, which is used to store parameters, return addresses, etc.

Heap is a global memory space provided by the operating system, which can be dynamically allocated by the program to obtain a certain size.

If it is a static object, it will not be released until the end of the whole program.

If it is a global object, it is a bit like static. It will be released only after the program ends.

The contents of the heap must be released manually. A new corresponds to a delete, and its life ends after delete. If it is not released, the memory will be leaked. The severity is that when the scope ends, the life of the pointer ends. There is no way to use the pointer outside the scope, and the memory of this block will lose control.

new is to allocate memory first and then call the constructor ctor. It can be divided into the following steps:

delete is to call the dtor of the destructor first, and then release the memory.

The memory space allocated by vc must be a multiple of 16B.

Under debug. It contains a lot of debugging information and cookie s (used to record the length and allocation status, which are provided to malloc and free). There may also be padding with an integer multiple of 16B.

Under release, there is no debugging information, and everything else is the same.

Match each other, or you will make mistakes. It is written as follows:

In the dynamically allocated array, there will be an integer record array capacity in front of the data. (VC) specific questions are as follows: 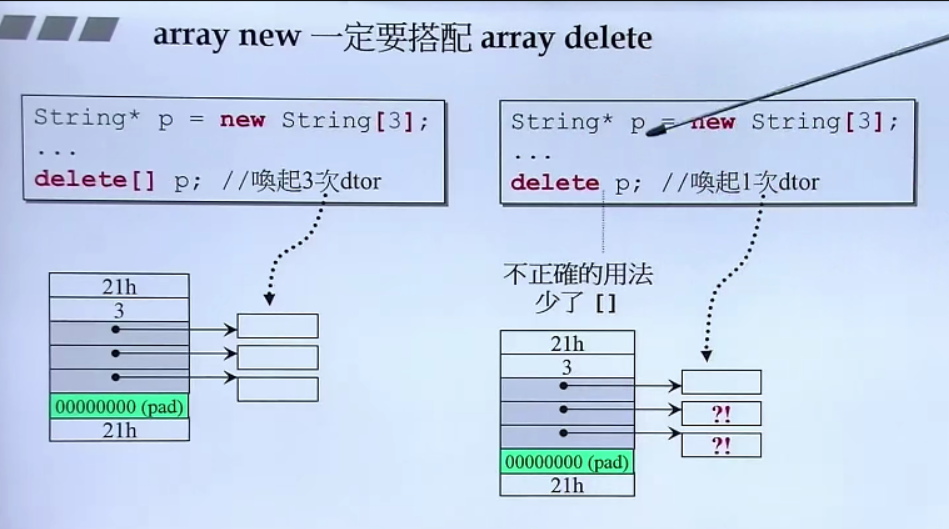