Instead of defining a new variable, a reference gives an alias to an existing variable. The compiler will not open up space for the referenced variable. It shares the same memory with its reference 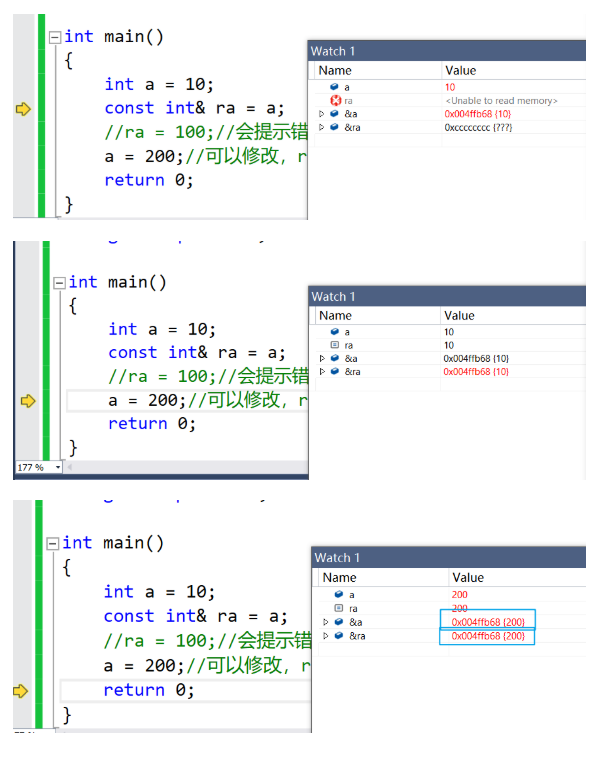 It can be seen that the addresses of ra and a are the same. Although the value of a cannot be modified through ra, ra will change together after a modifies the value

💙 Let's look at the following 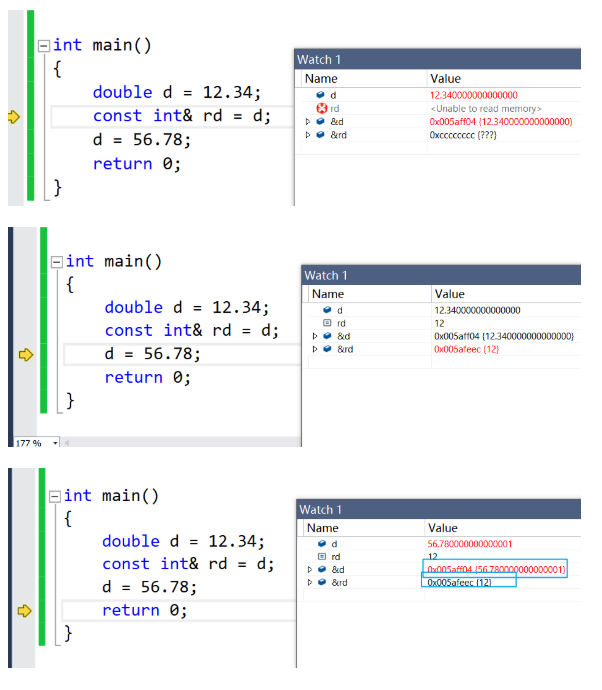 Assuming that rd is a reference to d, when d becomes 56.78, rd should also be changed. However, we actually use debugging and find that rd does not change after d is changed, and their addresses are different

According to the characteristics of variables, we know

1. The types of reference variables and reference entities must be consistent

2. Implicit conversion can occur between double and int types

📍 Do you know the address of the temporary space created by the compiler?

📍 Do you know the name of the temporary space created by the compiler?

Conclusion: the temporary space created by the compiler is constant ----- > so we can't modify it

📍 Does the above code look a little strange? Why does the value of result change?

1. First, we use the monitoring window to find that the addresses of result and ret are the same

2. If you want to find out completely, you need to sort it out from behind the function call

When each function runs, it needs to have its own independent stack memory time, which is called the stack frame used at the time of function call 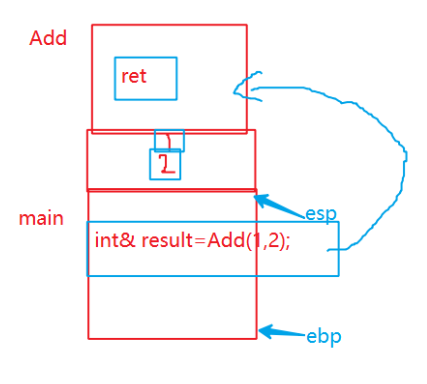 So we need to pay attention to:

📍 Must not return the space on the function stack ----- > typical: local variable

📍 What kind of variable entities can we return?

📍 Doesn't it mean that the compiler won't make room for variables of reference type?

In fact, the reason for saying this conceptually is to better understand references, but the underlying implementation technology of references is pointers

📍 Then why do you need to quote?

Then we need to talk about the differences between pointers and references in concepts, features, and applications

The pointer is 8 bytes not because the operating system is 64 bits, but because it is compiled in a 64 bit manner

Pointer and reference are different

1. The reference must be initialized during definition, but the pointer is not required

2. After initializing and referencing an entity, the reference cannot reference other entities, and the pointer can point to any entity of the same type at any time

3. There is no NULL reference and a NULL pointer

4. The meaning in sizeof is different. The result of reference is the size of the reference type, but the pointer is always the number of bytes (4 / 8 bytes) occupied by the address space

7. There are different ways to access entities. The pointer needs to be explicitly dereferenced, and the reference compiler handles it by itself

8. References are safer to use than pointers