If you open four threads, ranging from 0 to 10 million, this program runs on a 4-core cpu with an interlock lock, as shown below: 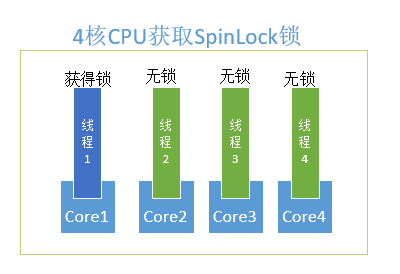 Thread 1 acquires the lock, and all other threads that do not acquire the lock are spinning (dead-loop) and occupying the core. So make sure that interLock locks don't hold locks for more than a very short period of time for any thread. Otherwise, it would cause a huge waste of resources.

Principle: Lock the internal SpinWait.SpinOnce. After more than 10 spins, each spin triggers context switching, followed by a sleep(0) operation every five spins and a sleep(1) operation every 20.
Sleep(0) only allows threads with equal or higher priority to use the current CPU, while other threads can only wait to starve. If there is no suitable thread, the current thread will reuse the CPU time slice.

Key points for use:
1. Each use is initialized to false to ensure that it is not acquired, true if a lock has been acquired, false otherwise. (
2. SpinLock is a non-reentrant lock, which means that if a thread holds a lock, it is not allowed to enter the lock again.
3. The SpinLock structure is a low-level mutually exclusive synchronization primitive that rotates while waiting to acquire a lock.
4. When using SpinLock, make sure that no thread holds locks for more than a very short period of time and that no thread is blocked when holding locks.
5. Even if SpinLock does not acquire a lock, it also generates a time slice for the thread. Threads that do not acquire a lock at this time are waiting for other core s that occupy the cpu to release the lock.
6. On multicore computers, SpinLock will perform better than other types of locks when wait times are expected to be shorter and contention is rare.
7. Since SpinLock is a value type, if you want both copies to reference the same lock, you must explicitly pass the lock by reference.
8. SpinLock may be corrupted if Exit does not have the Enter internal state that was called first.
9. If thread ownership tracking is enabled (via) whether it can be used with IsThreadOwnerTrackingEnabled, an exception will be thrown when a thread attempts to reenter a lock it already holds. However, if thread ownership tracking is disabled, attempting to enter a lock already held will result in a deadlock.