Optical character recognition (OCR) is a process of converting handwritten or printed text in an image into machine coded text to obtain text and layout information in the image. Its purpose is to recognize the words in the picture for further word processing.

The earliest OCR technology can be traced back to 1914. Emanuel Goldberg developed a hand-held scanner. When this scanner scans printed documents, it will produce corresponding specific characters; In the 1930s, the traditional template matching algorithm was applied to the recognition of English letters and numbers; So far, OCR technology has made great progress, new OCR algorithms emerge in endlessly, and gradually transition from traditional algorithms to deep learning algorithms. With the emergence of smart phones, OCR technology is widely used in various occasions, such as identification of passport documents, invoices, bank cards, ID cards, business cards and business licenses. At present, OCR technology is a hot research field of pattern recognition, artificial intelligence and computer vision.

ID card information extraction is an important application in the field of OCR. With the development of digital finance, online payment and online financial services are booming. OCR technology can accurately and quickly extract gender, birthplace, date of birth, ID number and other information from user ID card pictures, so as to facilitate user authentication and authentication. It effectively solves the problem of ID card information entry, can process data quickly and efficiently, and greatly improves the efficiency.

In the design of this system, OCR recognition of ID card mainly goes through three processes: text line positioning, character cutting and character recognition (see the figure below). Because the background of the ID card picture is relatively single, and the ID card text is black characters, which is quite different from the background, good results can be obtained by using traditional methods in text line positioning and character cutting.

At present, most character recognition algorithms recognize individual characters. According to rough statistics, the number of Chinese characters commonly used in ID cards is about 6500. It is very difficult to use traditional methods to recognize such a large number of pictures and obtain high accuracy. In recent years, deep learning technology has been widely used and made a breakthrough in the field of image recognition.

In the 2012 ImageNet competition, the convolutional neural network (CNN) used by Alex achieved a recognition accuracy of 84%, much higher than the 74% accuracy in the previous two years. Since then, with its excellent performance in the field of image recognition, CNN has developed into one of the most effective methods in image recognition technology.

In the implementation of ID card OCR, the image processing part uses the computer vision library OpenCV for corresponding image processing, and the CNN network for character recognition uses Keras with Tensorflow as the back end for construction and training. 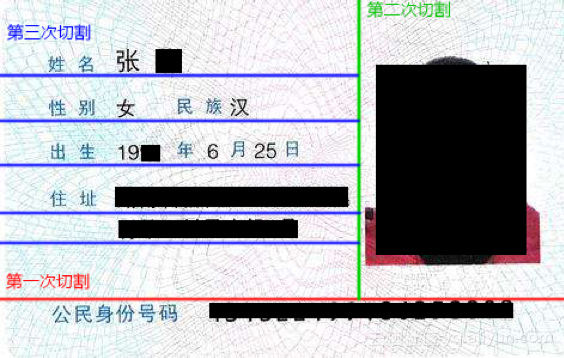 By observing the ID card image, we can find that there is a clear interval between the ID number and the personal information and photos above. Therefore, using this interval can easily separate the ID number. First, in order to reduce the interference of background to location, the gray image is normalized and the projection is used to project the image. The principle of the algorithm is to analyze the pixel distribution histogram of the image. The projection peak is the ID number area from the bottom to the first obvious peak area. The specific codes are as follows:

When the user uses the mobile phone to shoot, the obtained image may have some problems such as rotation angle and uneven illumination. In order to reduce the impact of such problems on positioning and recognition, it is necessary to use CLAHE algorithm for illumination correction, Canny algorithm for edge detection, and Radon transform to obtain the rotation angle, Then perform rotation correction according to the rotation angle obtained in the previous step. The implementation code of Radon transform is as follows:

After the rotation correction, the same image is projected after the ID number is separated. Here, the projection value in the corresponding direction of the image is obtained by calculating the pixel mean in the vertical direction. The first peak area from right to left in the projection peak is the position of the column where the ID card photo is located. The following figure is the schematic diagram of projection cutting: 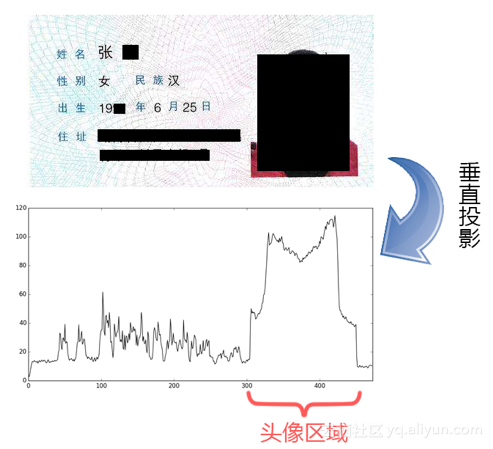 After removing the ID card photo, the remaining part is the required ID text information. Since the specification of the ID card is uniform, we can remove the blank part around the text and further reduce the area of the text image part. Through the observation of the character arrangement on the ID card, it can be seen that there are more black pixels on the lines with text information, and there is an obvious gap between the lines of characters. When the image is horizontally projected, the lines with text information will form obvious peaks, and the gap between lines will form obvious peaks and valleys. This determines the approximate position of the horizontal area where each line of text is located. 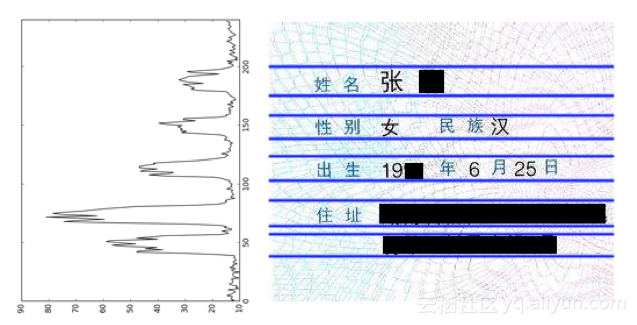 After obtaining the text line, it is necessary to cut a single character. After cutting each character, it is convenient for subsequent character recognition. The simplest method of character segmentation is to use continuous equally spaced frames as templates for segmentation. However, for the actual ID card image, the ID card address information often contains numbers and Chinese characters, and the number of characters can not be determined. Therefore, using equally spaced templates to segment single characters can not get ideal results, Therefore, the vertical projection cutting algorithm is adopted for the cutting of a single character in this system, and the local maximum method is used to obtain the best cutting position. However, characters with left-right structure or left middle right structure often appear in Chinese characters, such as "North", "Sichuan" and "small". In projection cutting, these characters are often wrongly cut into two or three characters. 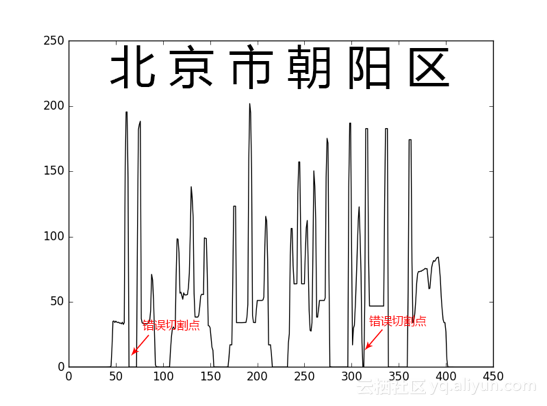 In order to solve this problem, we statistically analyze the width of a single character, take the character width as the judgment standard, and merge the cut characters through the character recognition model, so as to solve the problem of cutting characters from the middle.

After obtaining a single character, in order to obtain the best recognition effect, before using CNN convolutional neural network for training and recognition, we need to carry out certain preprocessing steps for the image, including image enhancement, truncation thresholding, image edge resection and image resolution unification.

After preprocessing a single character, we get a sample set composed of many single characters. The project uses about 50000 ID card pictures and 750000 single character samples for actual training, covering 6935 kinds of numbers, Chinese characters and English letters, which can cover more than 99.9% of the common characters of ID card. After the above preprocessing, we get a gray image with the size of 32 * 32 pixels and the number of channels of 1 for each single character sample. Therefore, each graph can be regarded as 32 * 32 * 1 = 1024 features as the input of convolutional neural network. The output of the neural network is the probability that the current input sample belongs to each character. If the neural network thinks that the more the input is like a character, the closer the output probability value is to 1. The character with the highest probability is selected through comparison and sorting, so as to achieve the purpose of recognition.

The task of this chapter is to identify the text information in the ID card photo. In practical application scenarios, the quality of ID card photos collected is often uneven, and there are various problems, such as oblique shooting angle and poor lighting conditions, which greatly interfere with the subsequent neural network training and recognition tasks. Fortunately, through some professional processing methods in the image field, we can reduce the impact of image quality to a certain extent. These methods can help us get more regular single number and Chinese character pictures, so as to form our training samples.

With the training samples, we create a deep convolutional neural network CNN to train the character recognition model. Convolutional neural network is composed of multi-layer network structure, which is especially suitable for tasks such as image recognition, but it needs a very large number of training data sets. For each input, the neural network model will output the probability that it belongs to all character categories. We believe that the character category with the largest probability value is the actual prediction result. Finally, our model achieves a recognition accuracy of 99.5% for a single character.

In addition, an unavoidable problem in the process of training character recognition model is the imbalance of training samples. For example, it is difficult or even impossible to obtain sufficient real training samples for some rare Chinese characters, which will greatly affect the recognition accuracy of such characters. Our solution is to generate more samples by program through some image processing means, such as adding noise to a small number of existing real samples, changing illumination, changing angle, etc., and mixing real samples with artificial samples for training, which has also achieved good results.

·BAT factory engineers must be Ansible. Haven't you come to learn yet?·"Java developer interview book" is being downloaded for free!·Look at him! Take you from basic to advanced play with the database·Participate in the essay solicitation of my Java strange play diary and win Beats headphones