My song moon lingers, my dance shadow is messy.
When you wake up, you have fun, and when you get drunk, you disperse.

The fusing measures are embedded in the system design. When the system has problems, if it cannot be repaired in a short time, the system will automatically turn on the fusing switch to refuse traffic access and avoid the overload request of large traffic to the back end.

In addition, the system can also dynamically monitor the repair of the back-end program. When the program has returned to stability, it will close the fuse switch and restore normal service.

Common fuse components include Hystrix and Sentinel of Ali.

In the Spring Cloud framework, the circuit breaker mechanism is implemented through hystrix. Hystrix will monitor the status of calls between microservices. When the failed calls reach a certain threshold, the default is 20 calls in 5 seconds, and the fuse mechanism will be started.
The annotation of the fuse mechanism is @ HystrixCommand. Hystrix will find the method with this annotation and associate this kind of method with the agent connected with the fuse.

All functions and services of the system shall be graded. When the system has problems and needs emergency current limitation, the less important functions can be degraded to stop the service and ensure the normal operation of core functions.

For example, in the e-commerce platform, if there is a sudden surge of traffic, you can temporarily downgrade non core functions such as commodity reviews and points, stop these services, and release resources such as machines and CPU s to ensure users' normal orders.

These degraded functions and services can be started after the whole system returns to normal for supplement / compensation.

In addition to function degradation, you can also use the method of full read cache and write cache instead of directly operating the database as a temporary degradation scheme.

Delay processing requires setting a traffic buffer pool at the front end of the system to buffer all requests into this pool without immediate processing. The back-end real business handler takes out requests from this pool and processes them in turn. Common can be implemented in queue mode.

This mode needs to classify users. Through the preset classification, the system gives priority to the user groups that need high security, and the requests of other user groups will be delayed or not processed directly.

When there are more than ten requests within 60s, the request is rejected; If the permission request does not exceed, the time will be reset at 60s.

Using the counter algorithm, for example, if an interface is required, the request cannot exceed 100 times in one minute.

A counter can be set at the beginning, which is + 1 for each request; If the value of the counter is greater than 10 and the interval between the counter and the first request is within 1 minute, it indicates that there are too many requests, and the request is restricted from being returned directly or not processed, and vice versa.

If the time interval between the request and the first request is greater than 1 minute and the value of the counter is still within the current limit, reset the counter.

Although the calculator algorithm is simple, it has a fatal critical problem. 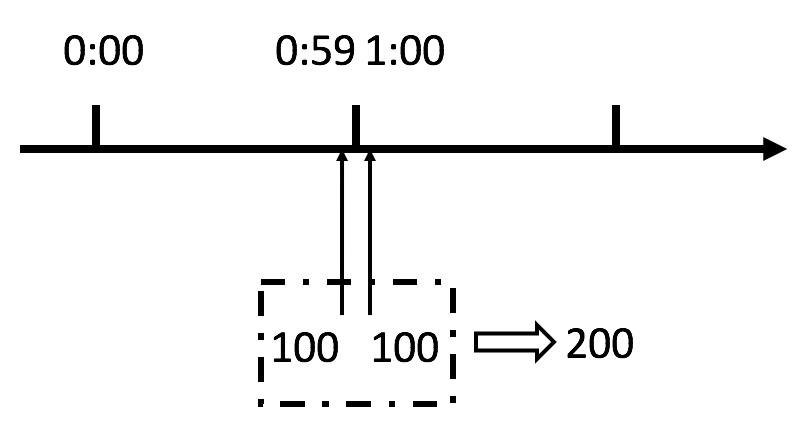 The above counter algorithm specifies a maximum of 100 requests per minute, that is, a maximum of 1.7 requests per second. Through burst requests at the reset node of the time window, the user can instantly exceed the rate limit of the current limit. This vulnerability may crush the service application instantly.

The above vulnerability problem is actually because the statistical accuracy of the counter current limiting algorithm is too low, and the influence of the critical problem can be reduced with the help of the sliding window algorithm.

In the above figure, the entire red rectangle represents a time window. In the current limiting example of counter algorithm, a time window is one minute. Here, the time window is divided. For example, in the figure, the sliding window is divided into 6 grids, and each grid represents 10 seconds. The window slides to the right every 10 seconds. Each grid has its own independent counter. For example, when a request arrives at 0:35 seconds, the counter corresponding to 0:30 ~ 0:39 will increase by 1.

So how does the sliding window solve the critical problem just now?

Use leakage bucket to limit current:

The idea of token bucket algorithm: generate a token at a fixed rate and put it into the token bucket. Each user request must apply for a token. If the token is insufficient, reject the request or wait. 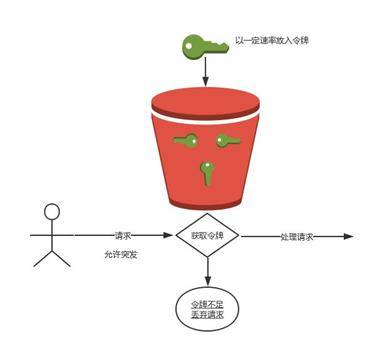 In the above figure, the token bucket algorithm will put tokens into the bucket at a constant speed. If the request needs to be processed, you need to obtain a token from the bucket first. When there is no token in the bucket, the service will be denied.

The token bucket algorithm does not take time to remove tokens from the bucket by default. If a delay time is set for removing tokens, the idea of leaky bucket algorithm is actually adopted.

Current limiting based on Google RateLimiter

Google's Open Source Toolkit Guava provides the current limiting tool class RateLimiter, which is based on the token bucket algorithm to limit the current, which is very easy to use. RateLimiter is often used to limit the access rate of some physical or logical resources. It supports two interfaces to obtain permissions. One is to return false (tryAcquire()) immediately if it cannot be obtained, and the other will block and wait for a period of time to see if it can be obtained (tryacquire (long timeout, timeunit)).

The previous algorithms belong to the category of single machine current limiting, but simple single machine current limiting still can not meet complex scenarios. For example, in order to limit the number of times a resource can be accessed by each user or merchant, it can only be accessed twice in 5s, or it can only be called 1000 times a day. In this scenario, single machine flow restriction cannot be realized. At this time, it needs to be realized through cluster flow restriction.

Redis can be used to implement cluster current limiting. The general idea is to send an incr command to the redis server every time there is a relevant operation.

For example, if you need to limit the number of times a user accesses a details / details interface, you only need to splice the user id and interface name, and add the prefix of the current service name as the redis key. Each time the user accesses this interface, you only need to execute the incr command on the key, and then add the expiration time to the key to realize the access frequency at the specified time. 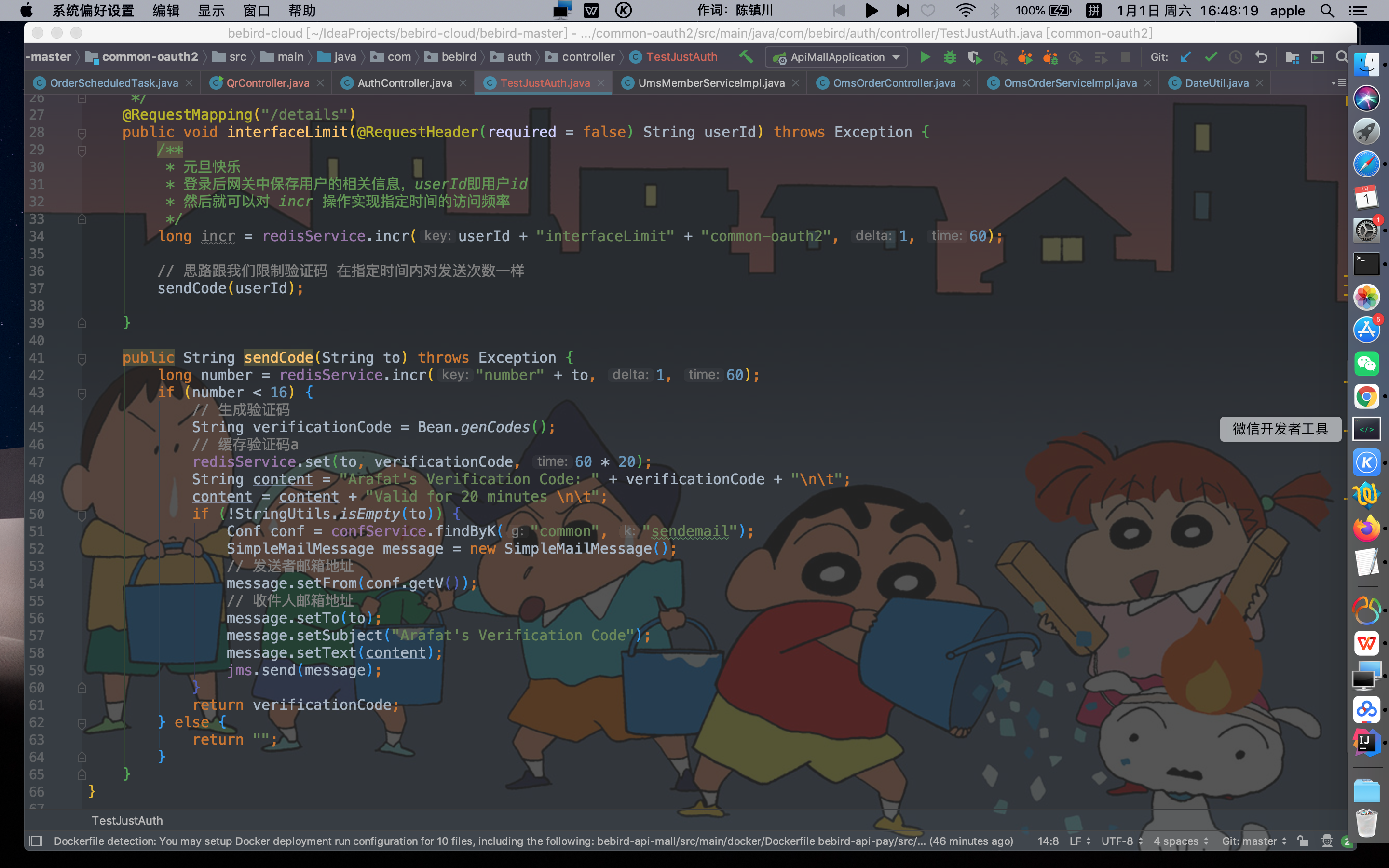 My song moon lingers, my dance shadow is messy.
When you wake up, you have fun, and when you get drunk, you disperse.