In the development of high concurrency system, there are four tools to protect the system: diffluence, cache, degradation and flow restriction. Based on the author's experience, this paper introduces the related concepts, algorithms and conventional implementation of current limiting.

Using cache can not only improve system access speed and concurrent access, but also protect database and system. If some data access frequency of the website is high, read more and write less, and the consistency requirement is low, cache is generally used. In addition, in the "write" scenario, we can use cache to improve system performance, such as accumulating some data for batch writing, cache queues (production consumption) in memory, etc., which are also used to improve system throughput or implement system protection measures. But when using buffer, we should avoid the problems brought by cache, such as cache penetration, cache avalanche, cache breakdown, etc.

Service degradation refers to a strategic degradation of some services and pages according to the current business situation and traffic when the server's pressure increases sharply or the dependent services are out of account, or a lightweight response to the failure is made to release the server resources to ensure the normal operation of the core tasks. Degradation often specifies different levels, and different processing is performed in different exception levels.

According to the service scope: you can cut off a function or some modules.

In short, service degradation needs to adopt different degradation strategies according to different business requirements. The main purpose is that although the service is damaged, it is better than nothing.

There are three types of current limiting scenarios

For example, SLB, nginx or business layer gateway all support flow restriction, which is usually based on the number of connections (or concurrent numbers) and requests. The dimension of flow restriction is usually based on IP address, resource location, user flag, etc. Furthermore, the current limiting strategy (benchmark) can be adjusted dynamically according to its own load.

The service caller, also known as local flow restriction, can limit the calling speed of a remote service. If it exceeds the threshold, it can block or reject directly. It is the cooperator of flow restriction.

Basically the same as above, when the traffic exceeds the capacity of the system, the service will be directly rejected. Usually based on the reliability of the application itself, it belongs to the main side of current limiting. We often say that the current limiting occurs here. In this paper, we mainly discuss the use of current limiter based on RateLimiter, the others are similar.

We can use atom counter AtomicInteger and Semaphore semaphore to do simple current limiting.

Each kind of current limiter has its disadvantages, but each kind also has its own application: for example, to limit a certain interface, service, the number of requests per minute, per day or the amount of calls, then you can use the counter to limit the current. Wechat access_ For token interface, the daily upper limit is 2000, which is a good way to use it. 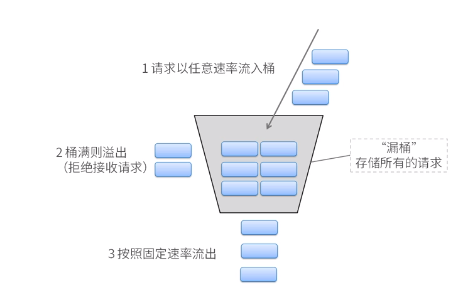 The counter current limiting method described above, for example, can only have 10 requests in 60 seconds. If the service request reaches the upper limit in the first second, all requests can only be rejected in the remaining 59 seconds. This is the first problem. The second problem is that the traffic trend will show that the traffic in the first second of every minute will soar, and the remaining 59 seconds will be smooth, which will cause traffic bullying. The leaky bucket algorithm can solve this problem.

The implementation steps of leaky bucket algorithm are as follows:,

The defects of leaky bucket algorithm are as follows: 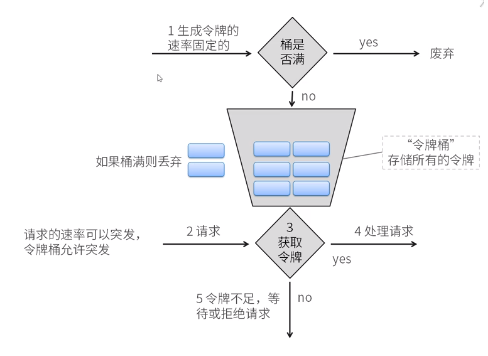 Token bucket algorithm (Token Bucket) has the same effect as Leaky Bucket, but in the opposite direction, which is easier to understand. As time goes on, the system will add token to the bucket at a constant 1/QPS interval (if QPS=100, the interval is 10ms) (imagine that there is a faucet constantly adding water instead of loophole leakage). If the bucket is full, it will not be added. When a new request comes, it will take a token respectively. If there is no token to take, it will block or refuse the service.

Google's Open Source Toolkit Guava provides a flow restriction tool class RateLimiter, which is based on the token bucket algorithm to complete the flow restriction and is very easy to use. And RateLimiter is thread safe, so it can be used directly in concurrent environment without additional lock or synchronization lock.

It is a smooth current limiter with preheating period. After it is started, there will be a preheating period to gradually increase the distribution frequency to the configured rate. That is, when the burst flow occurs, the maximum rate cannot be reached immediately, but it needs to rise gradually within the specified "preheating time" to finally reach the threshold value;

Its design philosophy, in contrast to smoothburst, is to use resources slowly and gradually (up to the highest rate) in a controllable way when sudden traffic occurs, and the rate is limited when the traffic is stable. For example, in the following code, create an average token distribution rate of 2 and a warm-up period of 3 seconds. Since the preheating time is set to 3 seconds, the token bucket will not send a token in 0.5 seconds at the beginning, but will form a smooth linear decline slope. The frequency is higher and higher. It will reach the originally set frequency within 3 seconds, and then it will output at a fixed frequency. This function is suitable for the scenario that the system just starts and needs a little time to "warm up".