Contents of this chapter

Spring: Spring IOC: give the power to create objects to the spring core container. Factory mode

There are three ways to create objects: 1 The default is to create 2.2 with parameterless construction Use factory static party 3 Example method

Singleton object: when the container is closed, the object is destroyed

Inversion of control: give the power to create objects to the spring core container. 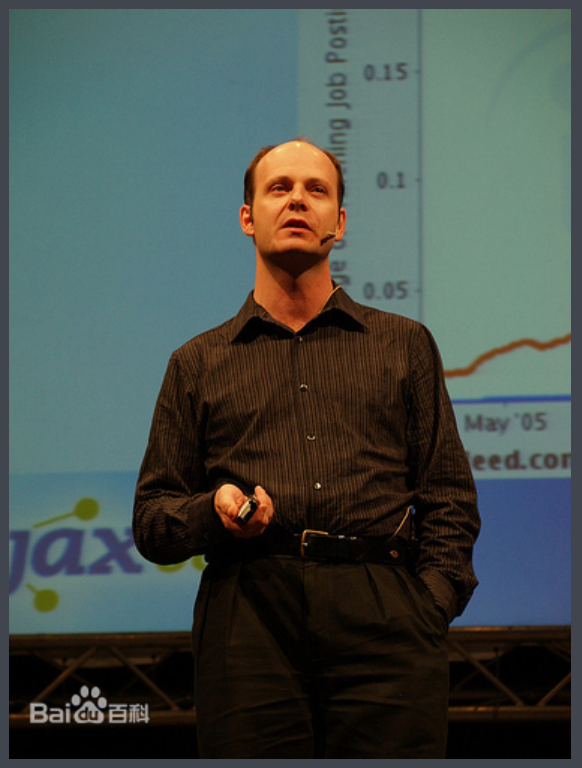 The latest version of spring, spring 5.0 General Edition (GA), was released in September 2017

Through the IoC container provided by Spring, the dependencies between objects can be controlled by Spring to avoid hard coding

Excessive program coupling. Users do not have to write code for the very low-level requirements such as singleton pattern class and attribute file parsing

To focus more on the application of the upper layer.

Through the AOP function of Spring, it is convenient for aspect oriented programming. Many functions that are not easy to be realized with traditional OOP can be realized

Easy to deal with through AOP.

It can free us from the monotonous and boring transaction management code and flexibly manage transactions in a declarative way,

Almost all testing work can be carried out in a container independent programming way. Testing is no longer an expensive operation, but easy to use

The rise of Spring has brought down Microsoft

Spring has a thin encapsulation layer for Java EE APIs (such as JDBC, JavaMail, remote call, etc.) to make these APIs

The difficulty of use is greatly reduced.

Spring's source code design is exquisite, the structure is clear, and the ingenuity is unique. It everywhere reflects the master's flexible use of Java design patterns 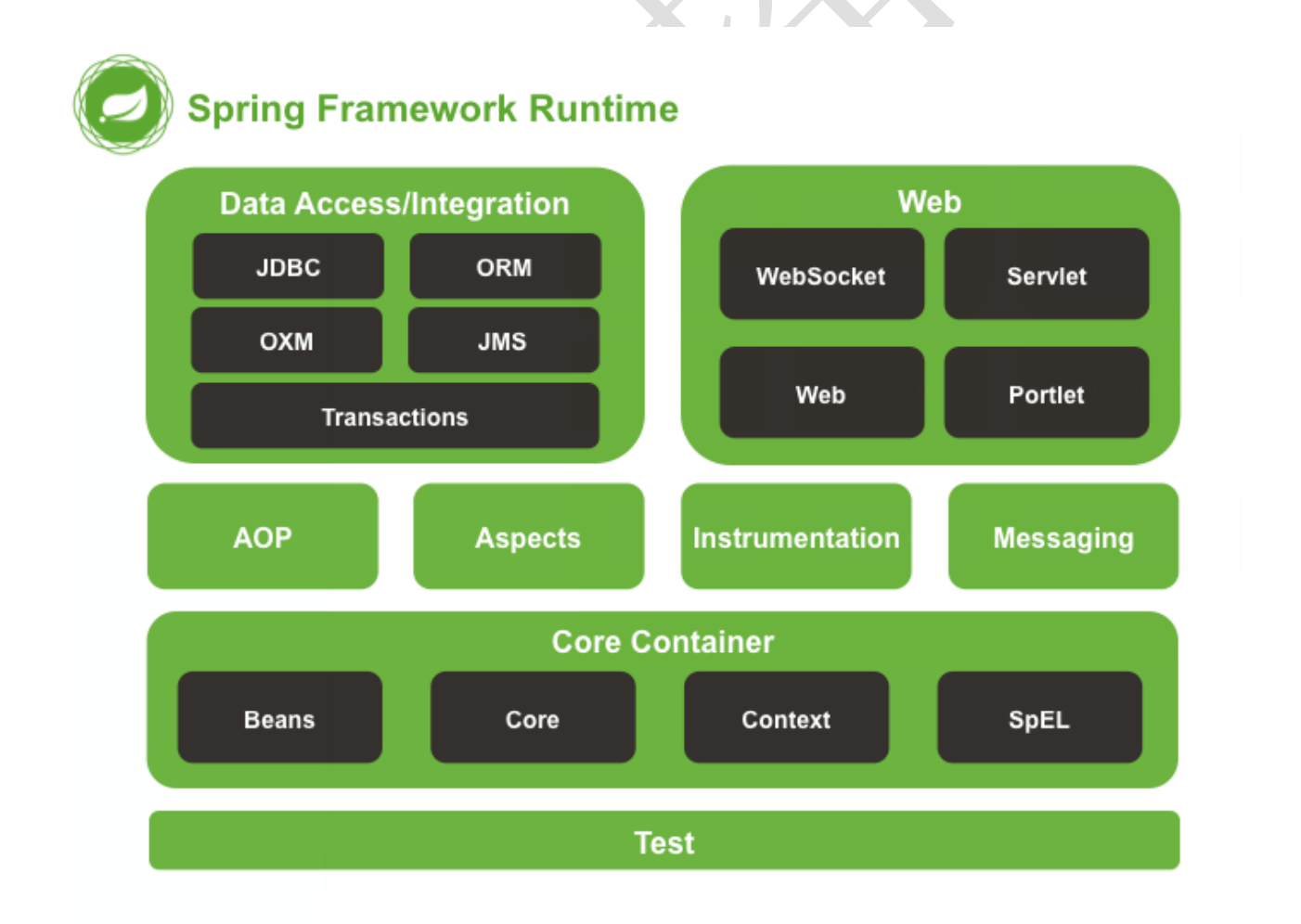 The Spring framework is a layered architecture consisting of seven well-defined modules. The Spring module is built on the core container, which defines the way to create, configure and manage bean s, as shown in Figure 1.

[the external chain picture transfer fails. The source station may have an anti-theft chain mechanism. It is recommended to save the picture and upload it directly (img-brxjdwbz-1645880916) (assets / hemwenocpcqvsarj. PNG! Thumbnail)]

Each module (or component) that makes up the Spring framework can exist alone or be implemented jointly with one or more other modules. The functions of each module are as follows:

The functions of the Spring framework can be used in any J2EE server, and most of them are also suitable for unmanaged environments. The core point of Spring is to support reusable business and data access objects that are not bound to specific J2EE services. There is no doubt that such objects can be reused between different J2EE environments (Web or EJB), independent applications and test environments.

Objective: to reduce the coupling between objects. 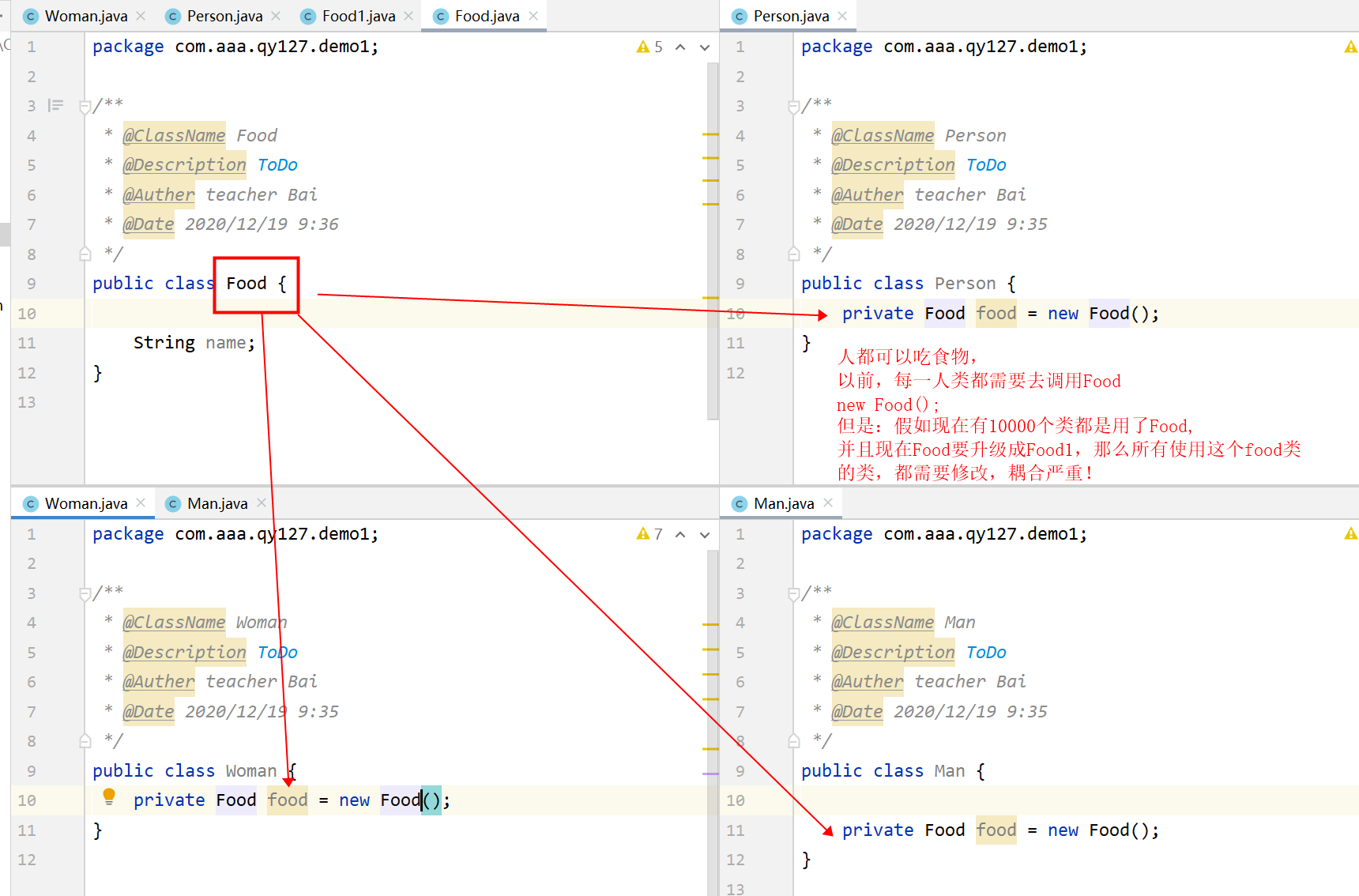 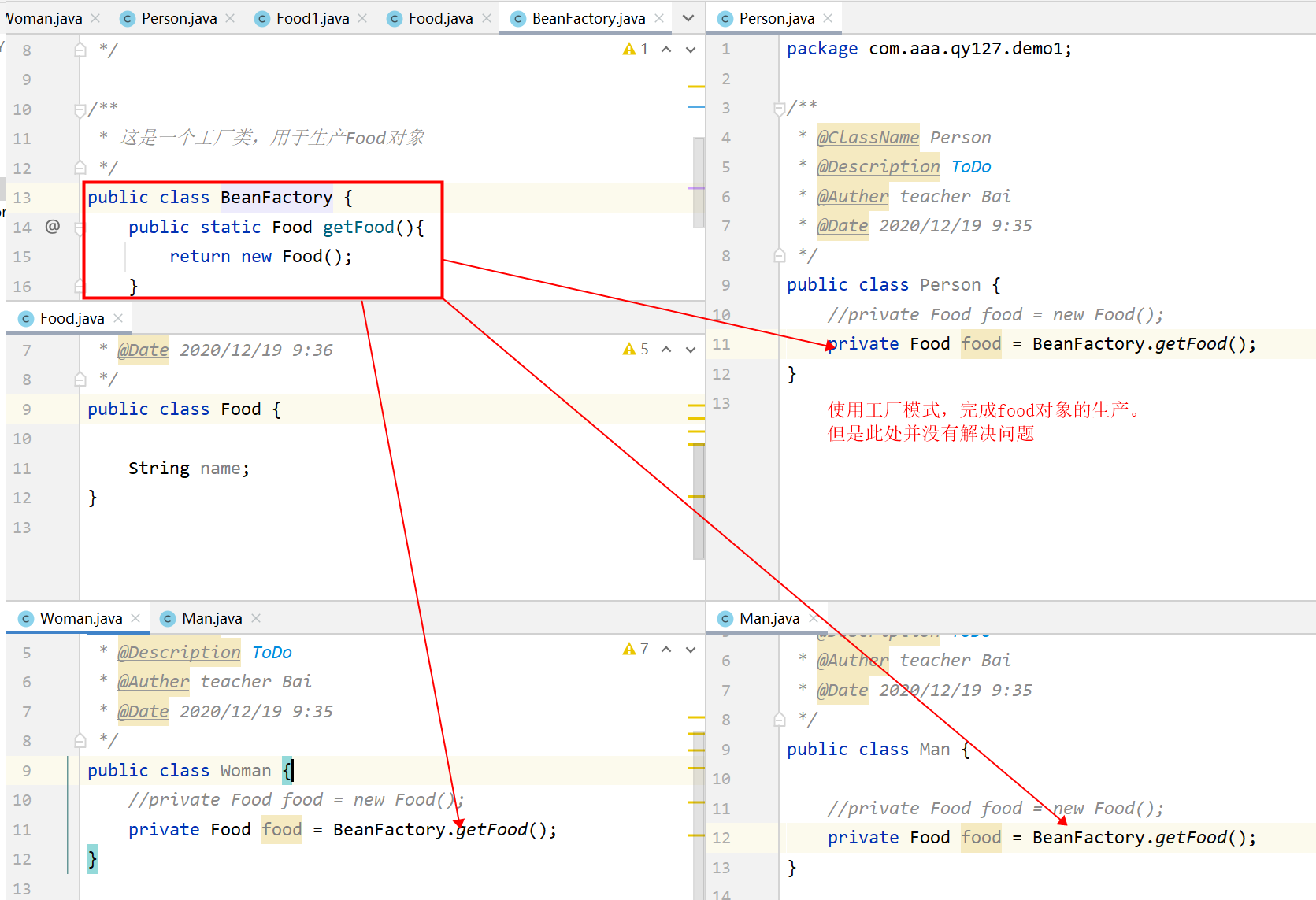 The code has not completed our purpose after modification. At this time, if Food is changed to Food1, it still needs to be modified one by one.

How to solve it? Use polymorphism of the interface. 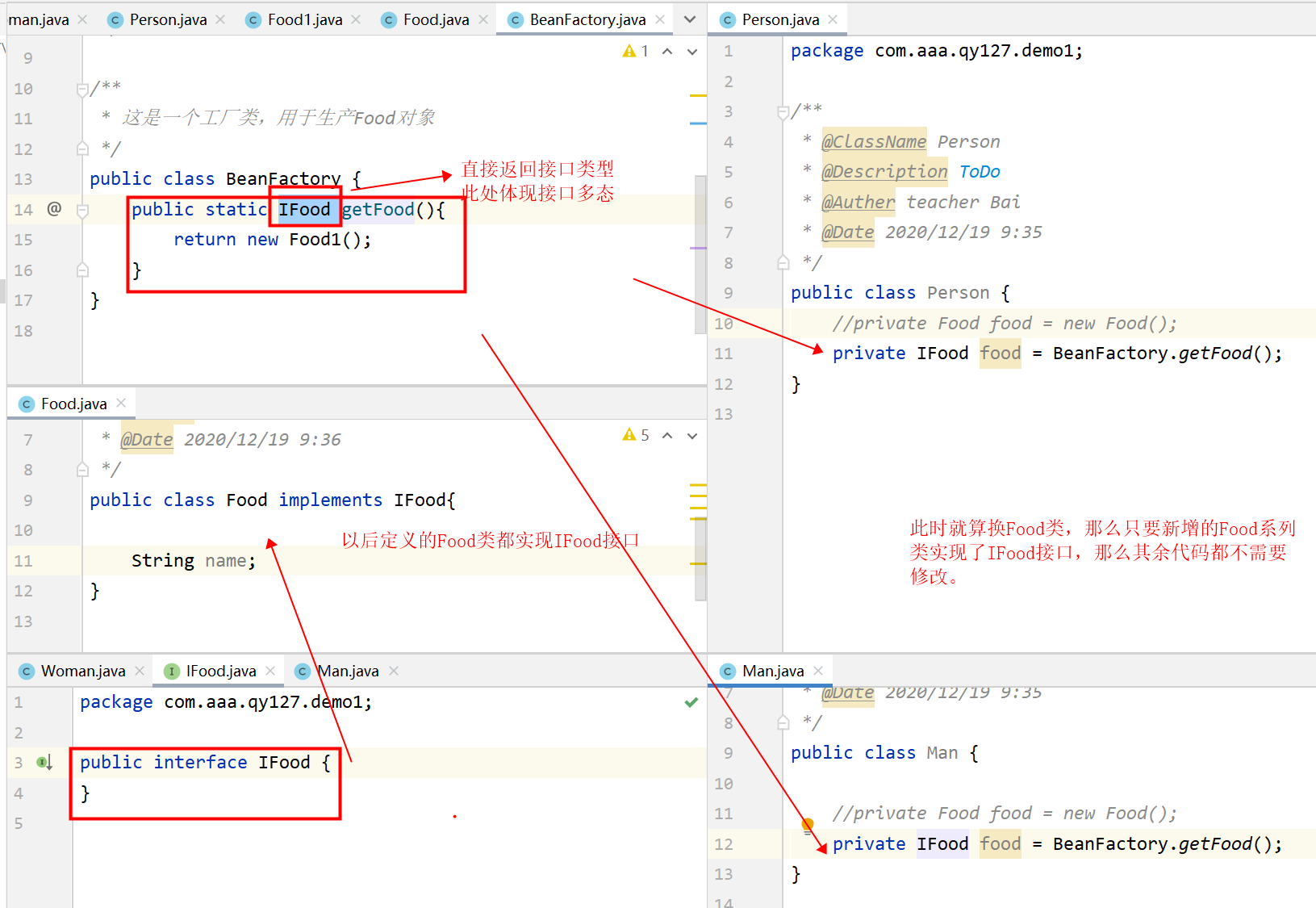 2. Program coupling (see for yourself after class)

It is classified as follows:

(2) Common coupling. Two or more modules jointly reference a global data item. This coupling is called common coupling. In a structure with a large number of common coupling, it is very difficult to determine which module assigns a specific value to the global variable.

(4) Control coupling. One module transmits a control signal to another module through the interface, and the module receiving the signal performs appropriate actions according to the signal value. This coupling is called control coupling.

(5) Mark coupling. If A module A passes A common parameter to two modules B and C through the interface, it is said that there is A tag coupling between modules B and C.

Cohesion and coupling: cohesion marks the tightness of each element in a module. It is a natural extension of the concept of information concealment and localization. Cohesion is to measure the relationship within the module from the perspective of function. A good cohesion module should do exactly one thing. It describes the functional connections within the module. Coupling is a measure of the interconnection between modules in the software structure. The strength of coupling depends on the complexity of the interface between modules, the point of entering or accessing a module and the data passing through the interface. The program pays attention to low coupling and high cohesion. That is, the elements in the same module should be highly close, but the interdependence between modules is not so close. Cohesion and coupling are closely related. A module with high coupling with other modules means low cohesion, while a module with high cohesion means low coupling with other modules. In software design, we should strive to achieve high cohesion and low coupling.

Inversion of Control (IoC for short), yes object-oriented programming A design principle in that can be used to reduce the cost of computers code Between Coupling degree . The most common method is called Dependency Injection (DI) and the other is called Dependency Lookup. When using objects, we no longer directly new, but hand over the right to create objects to the core container in the framework. When we need to use objects, we can get them directly from the container.

The idea of IoC has appeared for a long time, but there is no specific implementation. Everyone writes code according to this idea (create their own factory). Later, there was a master Rod Johnson (founder and famous author of Spring Framework) University of Sydney Not only a computer degree, but also a music degree. More surprisingly, before returning to the field of software development, he also received a doctorate in musicology.), I wrote a framework to implement the idea of IoC. Later, this framework was named Spring. (before that, everyone used the Hibernate framework. The Chinese name of this framework is hibernation, and this framework is bulky and highly coupled. Rod Johnson wrote the framework to solve the problem of high coupling similar to hibernate, so he named his framework Spring and told the world that winter has passed and Spring is coming.).

Create the project and import the jar package

1.3 write test code and run it

There are two ways to get the creation of Bean objects in the test class.

Refer to the following for the difference between the two interfaces:

Output results, you can observe the creation of objects and the call of methods

The core components of spring: BeanFactory interface and ApplicationContext interface

The two functions are similar.

2.1 differences between ApplicationContext and BeanFactory interfaces

Top level interface of Spring container: get Bean object; Manage the relationship between classes (dependencies) BeanFactory is provided by org springframework. beans. factory. BeanFactory interface definition BeanFactory is the implementation of Factory pattern and the core interface of IOC container. Its responsibilities include: instantiating, locating, configuring objects in the application and establishing dependencies between these objects.

The BeanFactory interface contains the following basic methods - ApplicationContext must have, because it is a sub interface, enhanced version

It is based on BeanFactory and provides application framework services. The new extended functions are as follows: it provides international support for resource access, such as URL and file event transmission, loading multiple configuration files, etc. there are three common implementation classes

ClassPathXmlApplicationContext: - the path of the classpath to load the xml file

FileSystemXmlApplicationContext: loading xml files based on the root path of the project

2.1.1 use of test functions in spring

B get by type

Ensure that the bean type is unique, or an error will be reported: org springframework. beans. factory. NoUniqueBeanDefinitionException

C is obtained by id + type

Name: configure the name of the current bean, and multiple beans can be configured.

Singleton: singleton (default) the object is created when the configuration file is loaded.

When multiple instances of getBean are created

Request: applies to the request scope

Session: acts on the session scope

Init method: the initialization method of the object

Destroy method: the method of destroying the object (the main method will not be called when testing, because it is too fast and can be destroyed manually. Call close(); Method, but at this time, the ApplicationContext object should be a subclass type and can no longer be an ApplicationContext type); 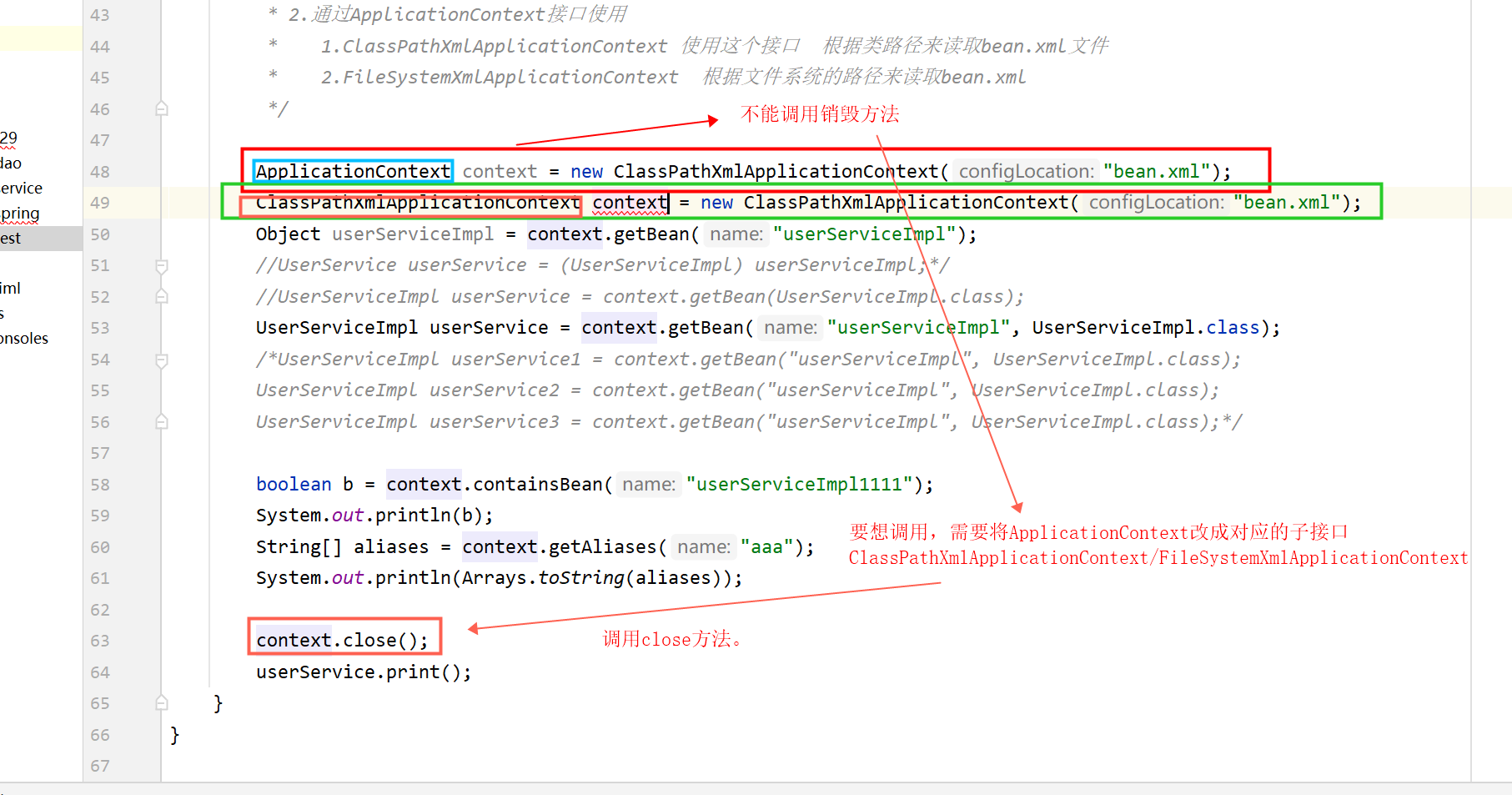 It's equivalent to inviting someone to dinner, buying clothes and giving gifts

Dependency injection: the purpose is to assign values to the attributes in the object.

What data types can the attributes in the object be: basic type, string, date, list <? > ---- > Basic, reference

The ultimate purpose of IOC control inversion is to reduce the coupling of programs, that is, to reduce dependencies.

When to create objects using IOC and DI?

For singleton objects, IOC and DI can be used. Only one object will be created during the running of the whole program, and we don't need to consider the change of data in the object.

However, if the attribute values in the object we want to create are constantly changing, DI and IOC are not recommended at this time.

If constructor injection is used, it needs to be in the bean Add the constructor Arg tag to the bean tag of the XML file

Type: used to specify the type of data to be injected, which is also the type of one or some parameters in the constructor.

Index: assign a value with the parameter assigned to the specified index position in the constructor, and the index starts from 0.

ref: used to specify other bean type data. It refers to beans that have appeared in spring's IOC core container

Note: when obtaining the bean object, you must inject data, otherwise the object cannot be created successfully.

Disadvantages: the instantiation method of bean object is changed. Even if we can't use this data when creating the object, we must provide it.

If you use the set function injection, you need to inject in the bean Add the property tag to the bean tag in the XML file

ref: used to specify other bean type data. It refers to beans that have appeared in spring's IOC core container

* * advantages: * * solves the problem of structural injection. You can selectively inject values instead of having to inject all.

Operations on the Properties class

The expression ${key} in XML represents a variable value corresponding to the key in the imported properties file, which is completely parsed by the third-party jar and read in XML format.

In order to solve many invalid configuration files, annotations can be used.

4. The third method: using annotation to provide (pay attention to opening the package scanning of annotation) 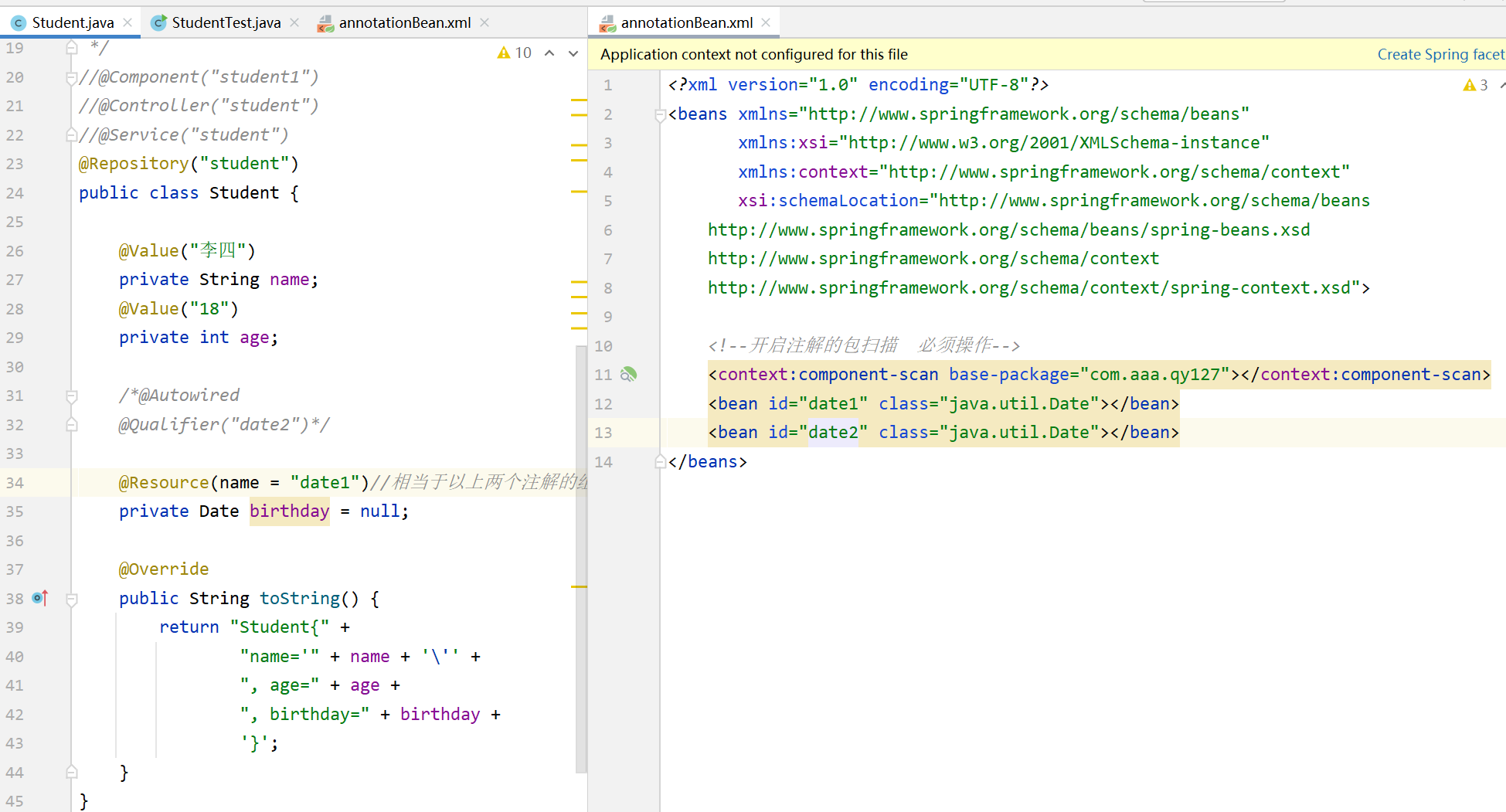 3. For changing the scope of action:

rce
Function: inject directly according to the id of the bean. It can be used independently.
Attribute: name is used to specify the id of the bean
The above three annotations can only inject data of other bean types, while the basic type and String type cannot use the above annotations. So how to inject basic data types and String types? (collection types can only be injected through xml)
@Value
Function: used to inject basic data type and String data type.