The simplest way is to traverse each node and save the node in a dictionary. When traversing the next node, check whether the node pointed to by the next node already exists in the dictionary.

To understand the idea of double pointer, we need to draw a picture and calculate the equivalent relationship of moving distance: 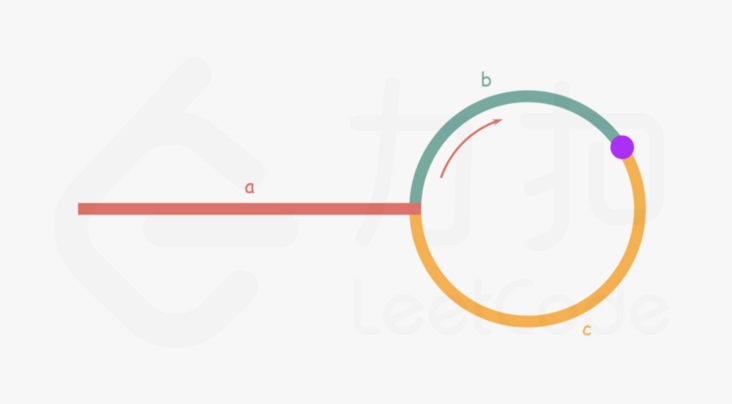 In the chain header node, define two pointers: fast and slow
fast moves 2 nodes at a time and slow moves 1 node at a time

At this time, the number of nodes fast passes through is a+b+n(c+b), and N represents the number of turns fast makes in the ring
The number of nodes passed by slow is a+b
Fast and slow move together, so they move in the same number of steps at any time, but fast moves two nodes at a time. Under the same number of steps, fast should move twice as many nodes as slow
So a+b+n(c+b) = 2(a+b)
Sorting out the equation: a=n(b+c)-b = nb+nc-b = (n-1)b+nc = (n-1)b+(n-1)c+c=(n-1)(b+c)+c
Get a = (n-1)(b+c)+c
That is, the distance from the head node to the ring entry node = the distance from the first encounter node to the ring entry node + (n-1) the length of the ring
If there are two pointers A and b at this time, a moves from the beginning node, b moves from the node where slow and fast meet for the first time, moving one node at a time, and a and b will eventually meet at the ring entry node.
At this time, slow is already in the position of the first encounter node. Therefore, when slow and fast meet for the first time, define a pointer at the head node and move one node with slow at a time. The node they meet is the ring entry node.

Space complexity: O(1). We only use three pointers: slow, fast and PTR.