1. The value of EDA mainly lies in being familiar with the data set, understanding the data set, and verifying the data set to determine that the obtained data set can be used for subsequent machine learning or in-depth learning.
2. After knowing the data set, our next step is to understand the relationship between variables and the existing relationship between variables and predicted values.
3. Guide data science practitioners to carry out the steps of data processing and Feature Engineering, so as to make the structure and feature set of data set more reliable for the next prediction problem.
4. Complete the exploratory analysis of the data, and make some charts or text summary of the data and punch in.

1. It can be seen that the data is highly dispersed, including integer, floating point, positive, negative and date. Of course, it can be regarded as a string. In addition, if the data are converted into numerical values, the gap between the data is particularly large, some tens of thousands, some tens of thousands, so it is difficult to avoid ignoring the role of some values in prediction, so it is necessary to normalize them.
2. The use of shape is also very important. You should know the size of the data well

Use describe() to analyze the basic statistics of data. The basic parameters of describe() are as follows (and it only analyzes numerical data by default. If there are string, time series and other data, the statistical items will be reduced): 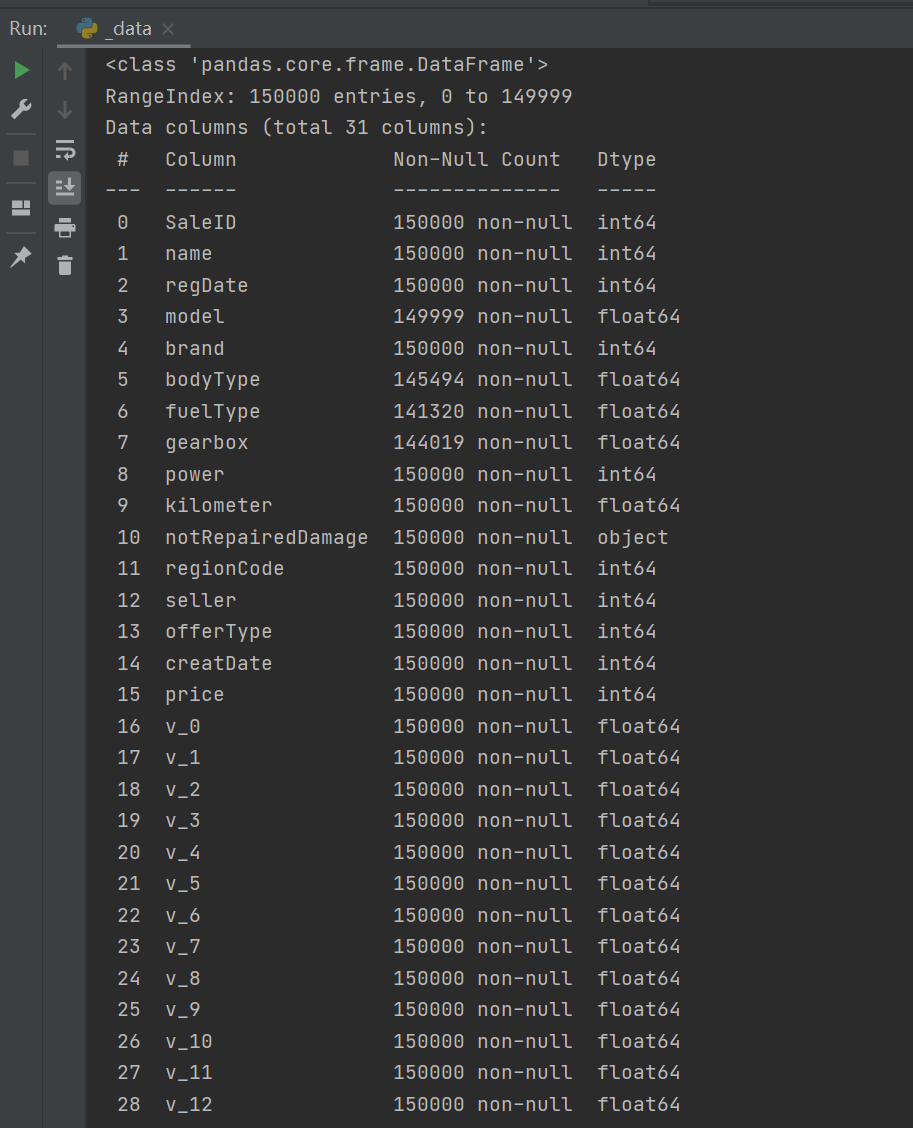 The code is as follows

From the above statistics and information, there is nothing special. As far as the data type is concerned, the type of notrepairddamage is object, which is an alternative and needs special processing in the future.

pandas has built-in isnull() to judge whether there is a missing value. It will judge the null value and NA, and then return True or False.

It can be seen that the missing data values are mainly concentrated in bodyType, fuelType and gearbox. The model in the training set is missing a value, but it doesn't hurt. As for how to fill in or delete these data, we need to consider it later when selecting the model.
At the same time, we can also view other properties of the default value through the missingno library. 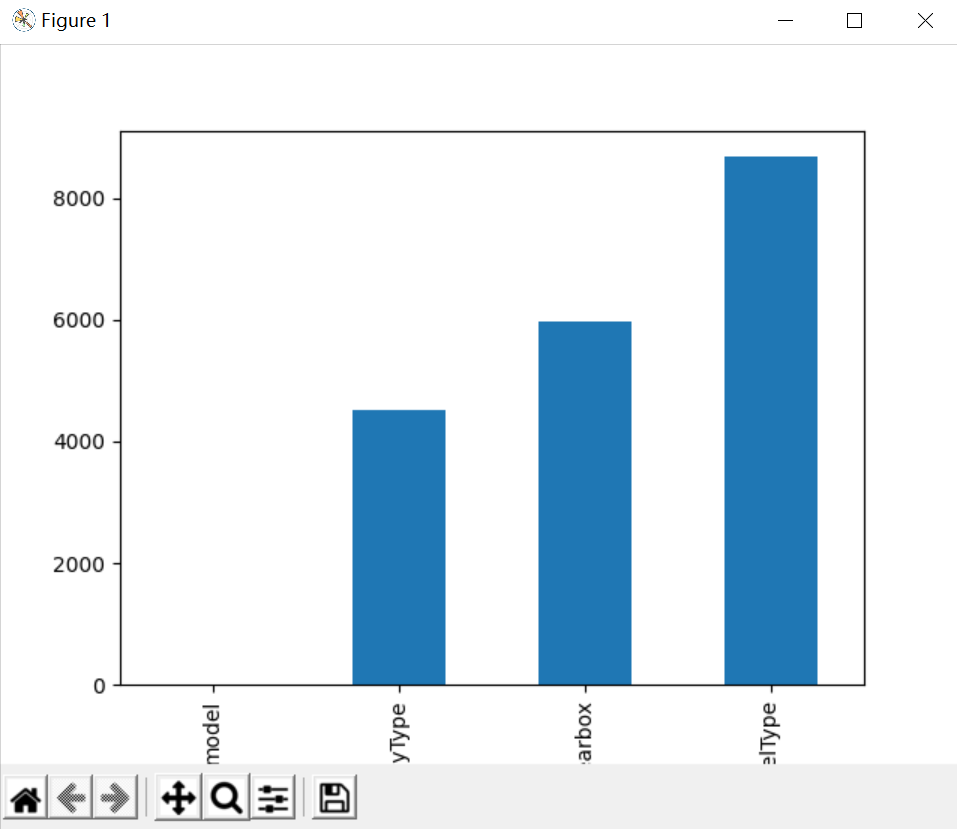 Through the above two sentences, you can intuitively understand which columns have "nan" and print the number of nan. The main purpose is whether the number of nan is really large. If it is small, you generally choose to fill it. If you use lgb and other tree models, you can directly leave it blank and let the tree optimize itself. However, if there are too many nan, you can consider deleting it

It was found that the type of notRepairedDamage is object, which is an alternative, so let's take a look at its details.
str in python and string and Unicode (character encoding) in numpy are represented as object s in pandas

It is found that '-' exists, which can be regarded as a kind of NaN, so it can be replaced with NaN

5. Understand the distribution of the real value to be predicted

Look at the distribution of price forecasts 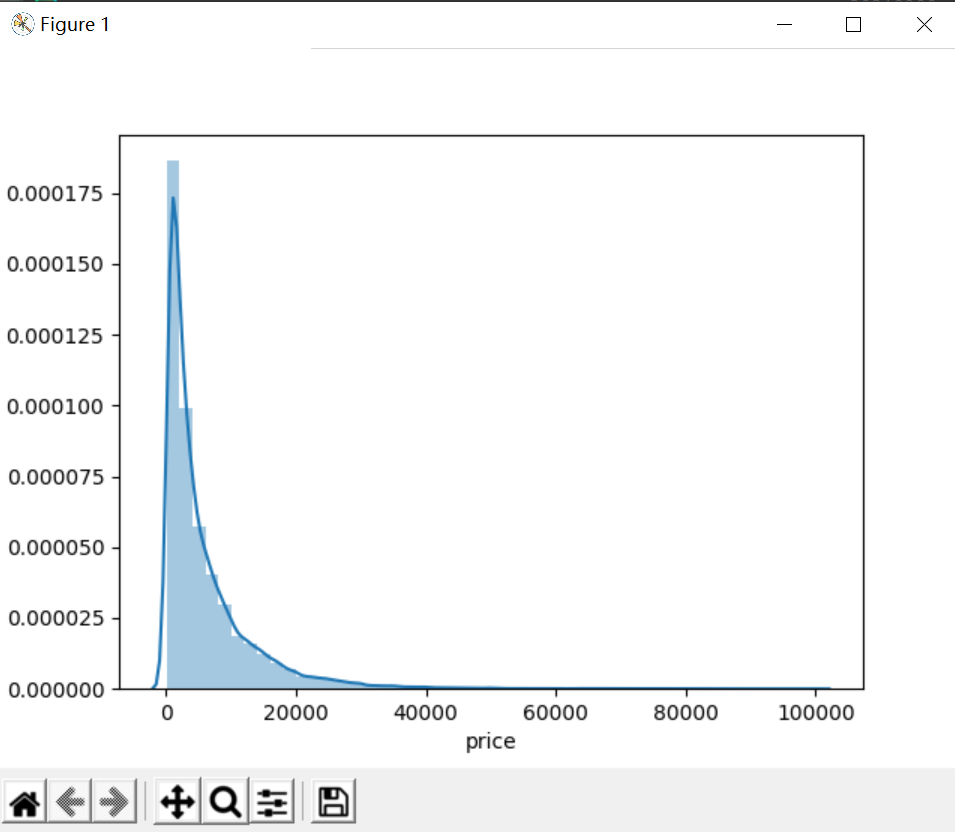 Obviously, the data distribution of the predicted value does not obey the normal distribution, and the values of skewness and kurtosis are very large, which is also in line with their definition. As can be seen from the figure, the long tail dragging on the right confirms that the kurtosis value is very large, and the peak is very sharp, which corresponds to the skewness value is very large. With my vague knowledge of probability and statistics, it's more like being close to Chi square or F distribution. Therefore, the data itself should be transformed. 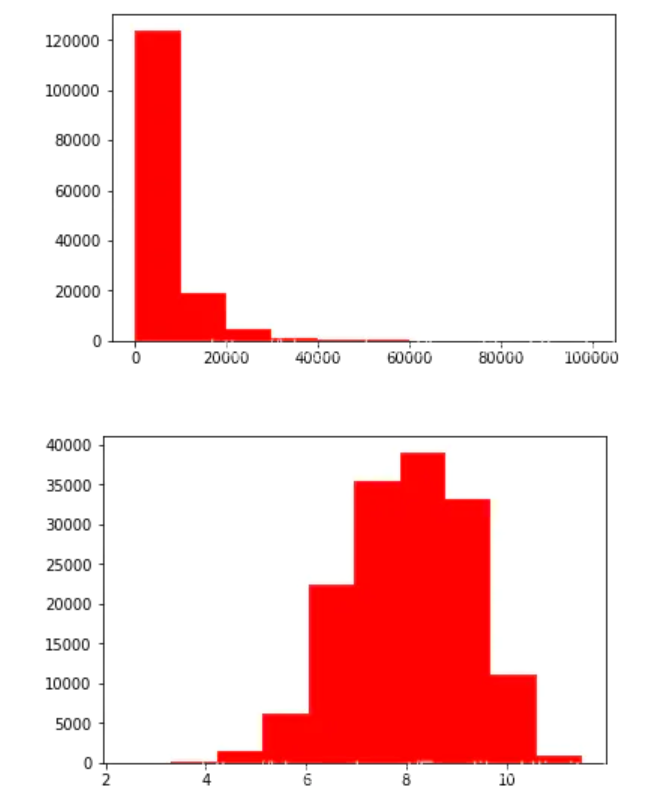 Because the data is relatively concentrated, it brings great difficulties to the prediction of the prediction model. Therefore, a log operation can be carried out to improve the distribution, which is conducive to the subsequent prediction.

This distinction applies to data without direct label coding
This is not applicable. It needs to be distinguished artificially according to the actual meaning
Digital features
numeric_features = Train_data.select_dtypes(include=[np.number])
numeric_features.columns
Type characteristics
categorical_features = Train_data.select_dtypes(include=[np.object])
categorical_features.columns
However, the label of the data set in this question has been marked with a name, and the label is limited. Each category is understandable, so it still needs to be marked manually. For example, although the model bodyType is numerical data, in fact, we know it should be object data. So you can do this:

Next, we add price to num_feas, and use pandas to generally analyze the correlation between features and visualize them.

The results don't show up (lazy) 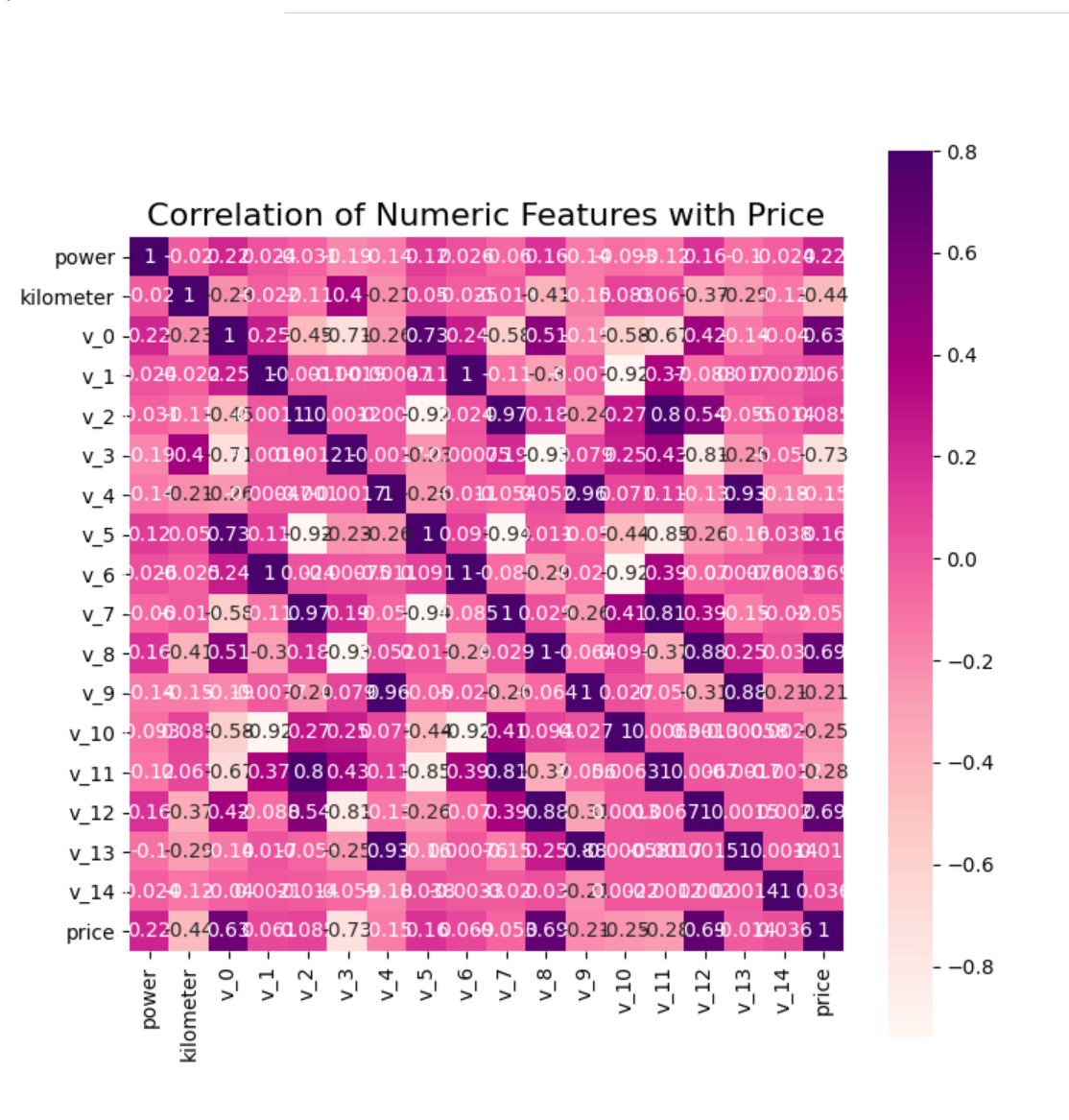 From the heat map, we can see that several characteristics with high correlation with price mainly include: kilometer,v3. It is quite consistent with our practical experience. That V3 may be a parameter related to important automobile parts such as engine. 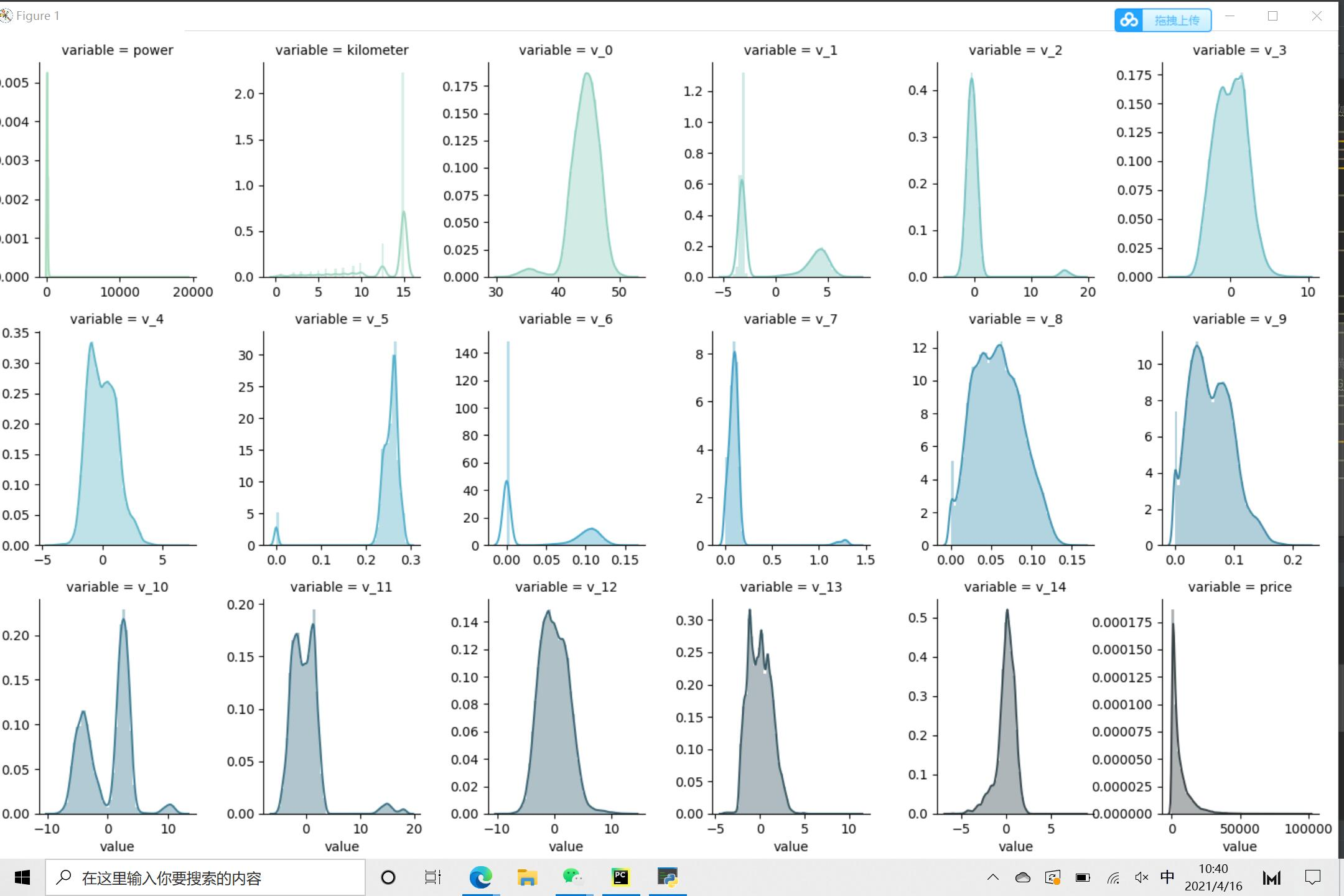 Many pictures will be displayed

Visualization of the correlation between price and other variables. Here, anonymous variables v0~v13 are used for analysis, and seaborn's regplot function is used for correlation regression analysis.

It can be seen that the distribution of most anonymous variables is relatively concentrated, but the performance of linear regression is relatively weak

The generated html file is opened with a browser as follows: 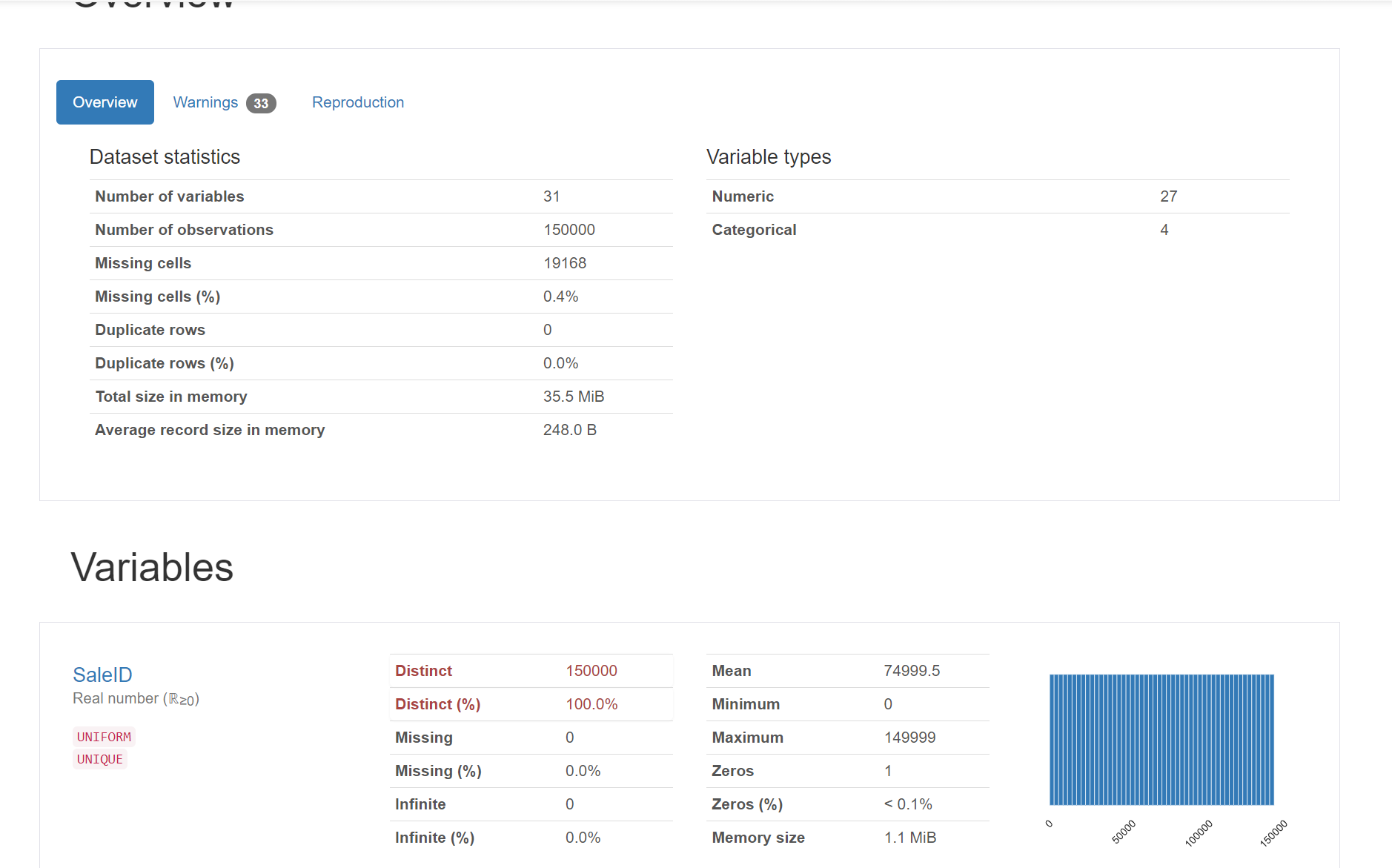 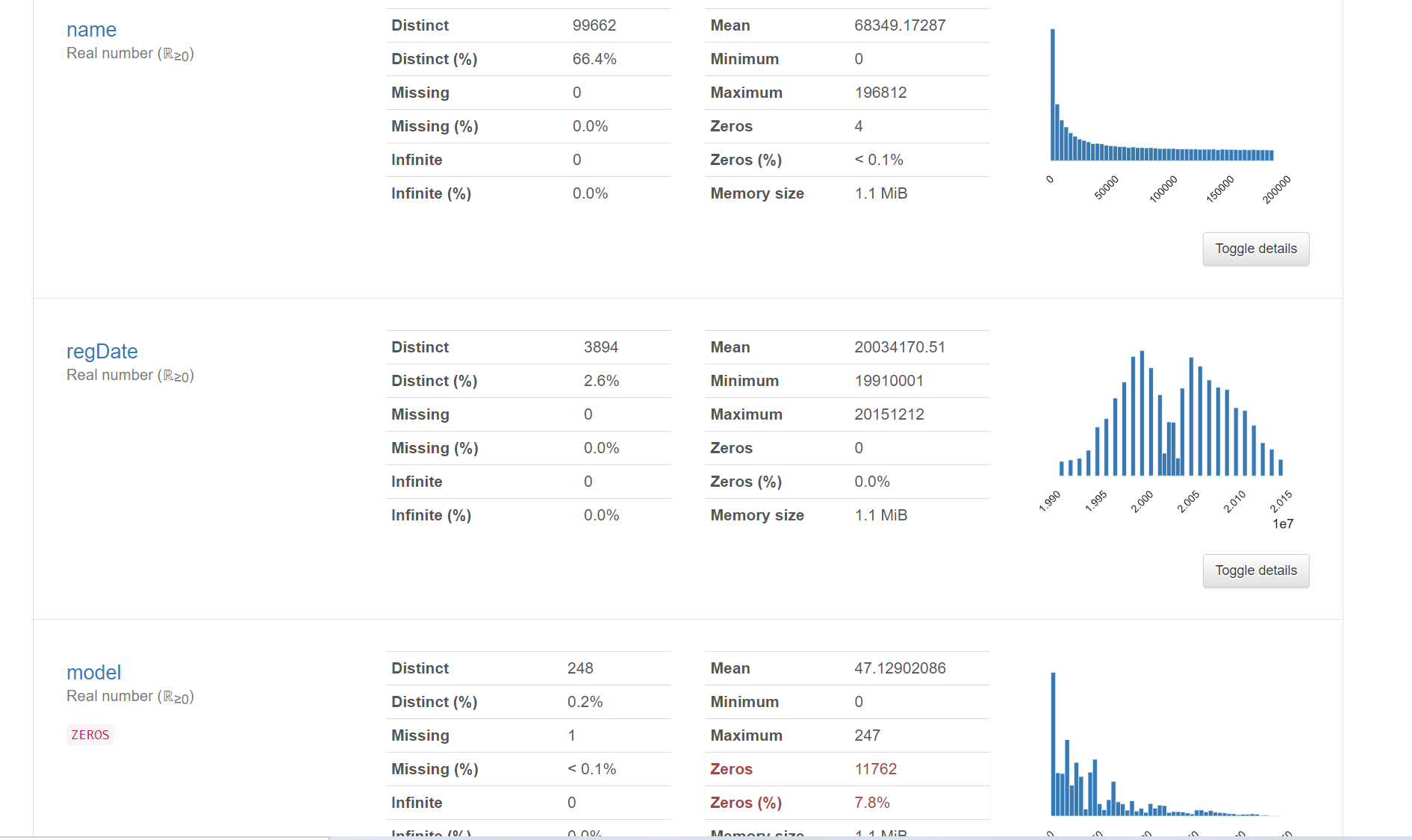 summary
1. Use describe() and info() to describe the basic statistics of data
2. Using missingno library and pandas Isnull() to visually detect and handle outliers and missing values
3. Be familiar with the concepts of Skewness and Kurtosis, and use skeu() and kurt() to calculate their values
4. After determining the range and distribution of predicted values, we can take logarithms or open roots to alleviate the problems in the data set 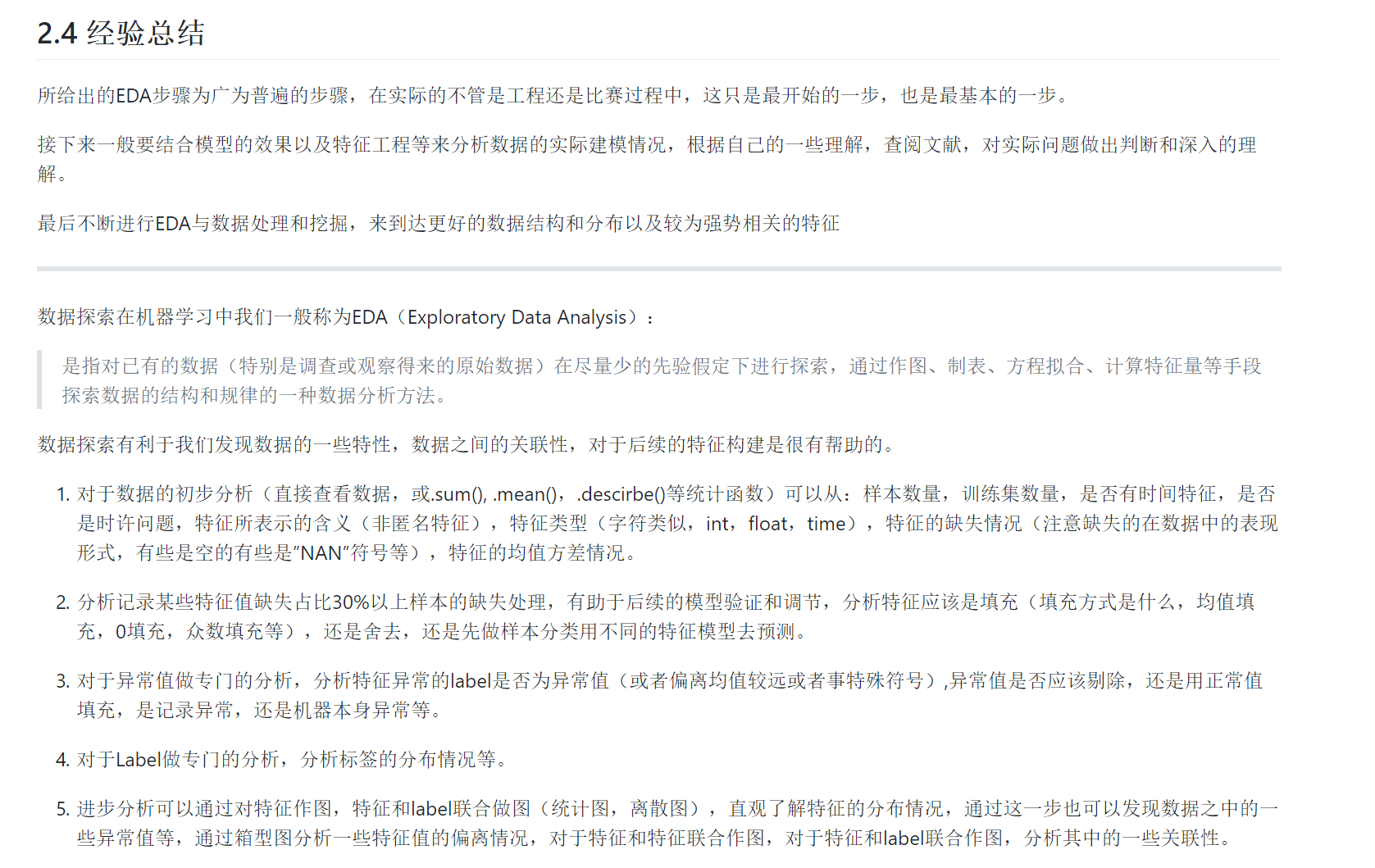