Algorithm is the essence of computer processing information, because computer program is essentially an algorithm to tell the computer the exact steps to perform a specified task. Generally, when the algorithm is processing information, it will read the data from the input device or the storage address of the data, and write the result to the output device or a storage address for later call.

Algorithm is an independent method and idea to solve problems.

For the learning algorithm, the important thing is the idea, and the implementation is the second.

The algorithm can be implemented in many different languages, such as c/c++/java/python, etc. this note mainly uses Python to describe and implement.

Before the specific study, we can introduce the understanding of the concept of algorithm through a simple topic that can be understood by the knowledge level of junior middle school.

Five characteristics of the algorithm

Note: simply relying on the running time to compare the advantages and disadvantages of the algorithm is not necessarily objective and accurate!

Suppose we run the two codes on an antique computer decades ago, the running time may not be very different.

The time efficiency of the algorithm can be expressed by "Big O notation".

Time complexity: assuming that there is A function g such that the time taken by algorithm A to deal with the problem example with scale n is T(n)=O(g(n)), then O(g(n)) is called the asymptotic time complexity of algorithm A, referred to as time complexity for short, and recorded as T(n)

How to understand "big notation"

For the temporal and spatial properties of the algorithm, the most important is its order of magnitude and trend. The constant factors in the scale function of the basic operation quantity of the measurement algorithm can be ignored. For example, it can be considered that 3*n2 and 100*n2 belong to the same order of magnitude. If the cost of the two algorithms for processing instances of the same size is these two functions respectively, their efficiency is considered to be "almost" and both are n^2.

There are several possible considerations when analyzing the algorithm:

For the optimal time complexity, it is of little value because it does not provide any useful information. It only reflects the most optimistic and ideal situation, and has no reference value.

For the worst time complexity, it provides a guarantee that the algorithm can complete the work in this level of basic operation.

The average time complexity is a comprehensive evaluation of the algorithm, so it completely reflects the properties of the algorithm. On the other hand, there is no guarantee that not every calculation can be completed within this basic operation. Moreover, it is difficult to calculate the average case because the instance distribution of the application algorithm may not be uniform.

Therefore, we mainly focus on the worst case of the algorithm, that is, the worst time complexity.

Now, we can analyze our two codes through the above concepts

It can be seen that the second algorithm we try is much more time complex than the first algorithm.

Note that log2n (base 2 logarithm) is often abbreviated to logn

Time consumed from small to large:

The timeit module can be used to test the execution speed of a small piece of Python code.

Timer is a class that measures the execution speed of small pieces of code.

stmt parameter is the code statement to be tested;

The setup parameter is the setting required to run the code;

The timer parameter is a timer function, which is platform related.

The object method in the Timer class that tests the execution speed of statements. The number parameter is the number of tests when testing the code. The default is 1000000. Method returns the average time spent executing code, in seconds of a float type. 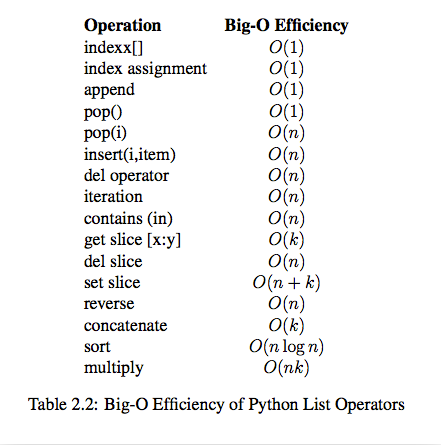