Detailed explanation of the status of ThreadPoolExecutor series

The number of threads is easy to understand, that is, how many threads are in the pool; There are five operating states, namely

The flow chart of the five states is as follows 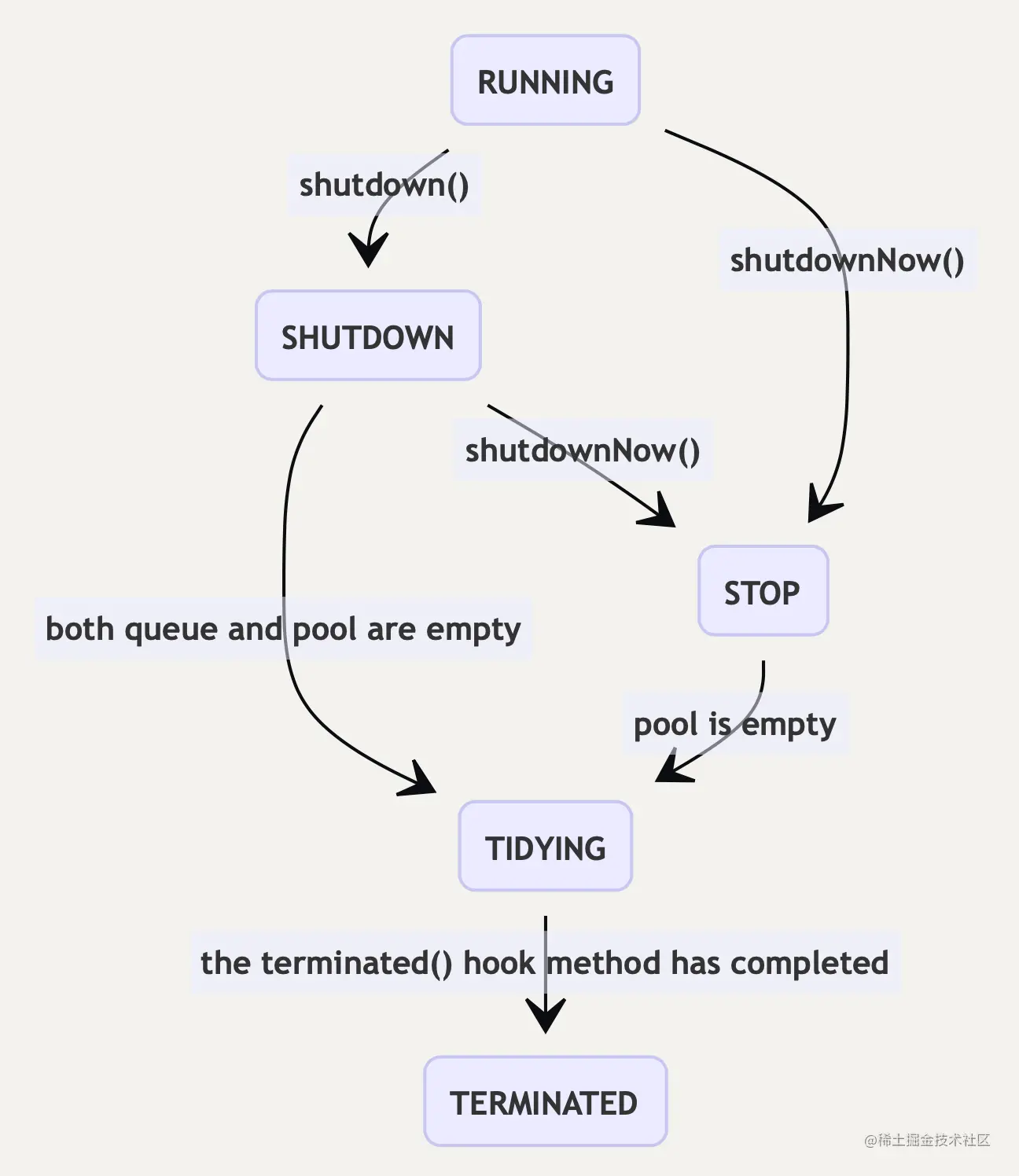 The source code comments are very good. Post them here

The number of threads is a non negative integer, which can be represented by an int.

These two properties of the thread pool need to be accessed at the same time, that is, atomic operations need to be guaranteed. If they are represented separately above, it is estimated that a lock must be added when modifying.

Doug Lea skillfully uses bit operation and solves the atomicity problem of operating two attributes with an AtomicInteger; At the same time, putting the status in the top three digits can also easily compare the value of the status of the thread pool.

Using 29 bits to represent the number of threads can support 500 million threads. Generally, we will set the thread stack size to 1M through - Xss1024K. If we reach 500 million threads, the ray stack space needs to occupy at least 500T of memory. It's really hard to imagine that we can reach this level one day.

However, Doug Lea carefully considered this possibility. If AtomicInteger is not enough, AtomicLong will be used instead. However, at present, AtomicInteger is faster and easier to use. It is good enough without over design~

With the above explanation of state definition, it is easy to understand the judgment method of thread pool state here.

isShutdown: as long as the thread pool is not RUNNING, it is closed.

isTerminated: TERMINATED. The top three digits must be 011, so the value of ctl must be greater than or equal to TERMINATED.

Next, let's take a look at the specific processing process in turn.

The first is an endless loop with the retry label. In java, the label is generally used in multiple loops to facilitate the control of program flow. Here is a double dead loop.

Step 1: in the outer loop, the status of the thread pool is judged,

It seems easier to understand after simplification. Let's look at the three sub conditions separately

Condition 1, (RS > = shutdown & & RS! = shutdown) is equivalent to RS > shutdown, that is, the thread pool is in the three states of STOP, TIDYING and TERMINATED. According to the definition of the initial state, no tasks will be processed, so addWorker must fail.

Condition 2, (RS > = SHUTDOWN & & firstTask! = null), SHUTDOWN is in SHUTDOWN status and will not receive new tasks. If firstTask is not empty, it indicates that a new task is being added. Of course, it should be stopped, let alone RS > SHUTDOWN (see condition 1).

Condition 3, (RS > = shutdown & & workqueue. Isempty()), if the task queue is empty, it means that there are no tasks to do, and the thread pool has been immediately or closed. Why do you add a worker thread? Needless to say, you should naturally discourage it.

Step 2.2, add one to ctl through CAS, that is, add one to the number of threads. As long as the CAS returns success, you can jump out of the retry double loop and enter the next level (step 3).

Step 2.3, CAS failed. There is only one possibility, that is, other threads have also modified the ctl value. We know that ctl contains two attributes: running status and number of threads, that is, these two attributes may change. Therefore, first judge whether the thread pool state has changed. If so, return to the first level (retry outer loop) and return to before liberation overnight~

Step 2.4, although there is no corresponding code in this step, it is also meaningful, that is, the number of threads in ctl has changed. At this time, there is no need to return to the first level, just start from the inner cycle.

Step 3, the number of ctl threads has increased by 1. You can't just yell without doing anything, so you start to add workers. This step is relatively simple. Create a worker object and add it to the workers collection. This step is locked because the ctl status needs to be checked again and elements need to be added to the HashSet of workers. We know that the HashSet is not thread safe.

What does a successful worker look like after going through layers of hurdles? Now it's time to reveal the true face of Lushan~

In the implementation of the tryAcquire method, success can be returned only when the state is 0, indicating that it is not reentrant.

The interruptIfStarted method, as its name implies, is to interrupt the worker when it starts. How do you know if the worker starts? You can know from the three states of state. If there is no start, state is the initial value - 1. Therefore, there is a judgment in the method that state > = 0. If it is a non negative number, it means that the worker has been started.

After reading the Worker class, I found that there is no variable about whether it is a core thread. How to distinguish between a core thread and a non core thread? In fact, in the implementation of Doug Lea thread pool, there is no difference between all working threads. The number of core threads and the maximum number of threads are only used to control some processing processes of the thread pool, such as addWorker above and getTask below.

The runWorker method is relatively long, and the key 6 steps are marked here.

Step 1. Since it has been run, first unlock it, that is, set the state state from the initial value of - 1 to 0, so as not to fail to lock later (as mentioned above, locking can succeed only when the state is 0).

Step 2, get the task. The task is either the first task passed in when creating the worker, or grab the task in the blocking queue.

Step 3, I'll start working immediately after I get the task. First lock it and tell others I'm busy. It's like going to the bathroom and locking the door.

Step 4, if you really work, you can't occupy the pit and don't shit~

Step 5, after finishing the work, successfully complete a task, add one to the chicken leg, and then unlock it, so that others can know that I'm free.

Step 6, the while loop exits, indicating that the task is not retrieved, either the thread pool is closed, or the non core thread does not retrieve the task within the timeout. In either case, the worker must be destroyed.

A core idea that thread pool can ensure thread reuse is that threads constantly obtain and execute tasks to ensure that threads always survive. Next, let's take a look at how worker threads fetch tasks.

Here is a brief talk about the idea of this method. Method is another dead loop. Each loop will first judge the thread pool status. If it is closed, it will directly reduce the number of threads and return null to let the working thread exit. Then judge whether the timeout is required. If the timeout is required and the timeout is not taken, the task will enter the next cycle. In the next cycle, a thread will exit because the maximum idle survival time has been exceeded. How to ensure that only one thread exits in the case of concurrency? The core lies in

When the worker exits, the following things should be done:

There are two ways to close the thread pool:

shutdown this calls the following methods in turn

In the tryTerminate method, there is another dead loop. First, judge the status of the thread pool. If it is RUNNING or SHUTDOWN, but there are tasks that have not been processed, it cannot be closed; If it is TIDYING or TERMINATED, it is unnecessary to terminate again and return directly.

Next, it is very simple. Set the CAS status to TIDYING. After CAS succeeds, execute the hook function terminated. After executing the terminated method, you can set the state to terminated, which is also in line with the state transition diagram at the beginning. If CAS fails, enter the next cycle and continue to judge various states.

When the ctl status is set to TERMINATED, it passes termination Signalall() to wake up the thread waiting on the termination condition queue. What is the waiting thread? Of course, it is the thread calling the awaitTermination method of the thread pool~

After understanding the shutdown method, it is much easier to look at shutdown now. There are three main differences: