Yesterday, you got dilworth theorem in t2 Middle School of membrane competition. I felt a little wonderful, so I simply studied it 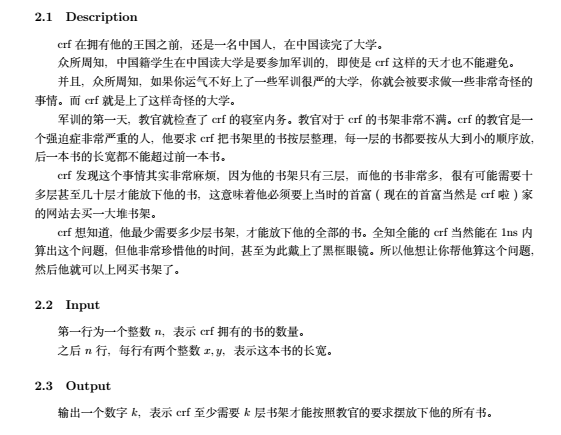 The main idea of the question is that given n tuples (x,y), the two tuples of X1 < = x2 and Y1 < = Y2 can be divided into one pile. How many piles can be divided at least

Idea: after sorting all the binary units from large to small by x, just look at how many non rising subsequences y can be divided into

The problem is, how to find the minimum partition number?

——Dilworth's theorem is on the stage

2. What is dilworth theorem?

(it can be easily understood as: minimum score = maximum anti chain length)

theorem   For posets < A, ≤ >, let the len gt h of the longest chain in a be n, then the elements in a are divided into disjoint inverse chains, and the number of inverse chains is at least n.

Prove that Shi is induced in n.

When n=1, A itself is an inverse chain, and the conclusion of the theorem holds. (in this case, ≤ is an identity relationship).

Therefore, for the question just now, only the longest ascending subsequence is required

Give n cows, given the initial position (different and ensure ascending input), the speed of each cow, and find the minimum number of runways to ensure that overtaking will not occur