Communication between devices in TCP/IP network is realized by using and relying on IP address. However, the IP address in digital form is difficult to remember (64.233.189.147), while the address in domain name form is more intuitive and easier to remember by users (www.baidu.com).

The cache function of domain name resolution results is provided to improve query speed and efficiency, but there is no regional address data under your control.

Manage and maintain the server of the domain resolution library responsible for resolution.

Resolve the library copy from the master or slave server replication (zone transfer).

IPv4 root name servers: there are 13 DNS servers responsible for resolving root domains in the world, including 10 in the United States, 1 in the United Kingdom, 1 in Sweden and 1 in Japan

IPv6 root name servers: there are 25 in the world, including 1 master and 3 slave in China and 1 master and 2 slave in the United States

(1) Recursive query: generally, the query between the client and the local DNS server belongs to recursive query, that is, after the client sends a request to the DNS server, if the DNS server itself cannot resolve, it will send a query request to another DNS server and transfer the final positive or negative result to the client. The source and target of this query remain unchanged. In order to query results, you only need to initiate a query once. (you don't need to do it yourself)

(2) Iterative query: generally (with exceptions), the query from the local DNS server to other DNS servers is an iterative query. For example, if the other party cannot return the authoritative result, it will initiate the query again to the next DNS server (refer to the result returned by the previous DNS server) until the query result is returned. The source of this query remains unchanged, but the target of the query is constantly changing. It is generally necessary to initiate multiple queries for query results. (you need to do it yourself) 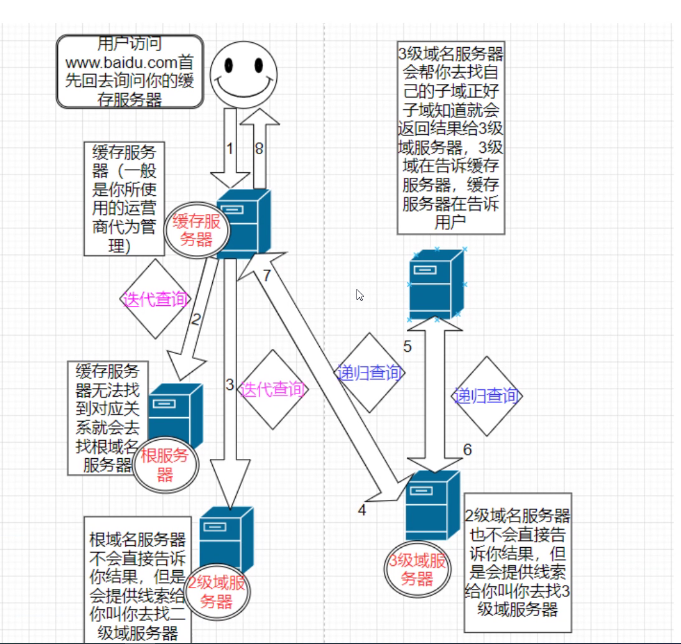 Primary DNS server: it is specially responsible for the resolution of primary domain names (generally representing a type of organization or country or region);

114.114.114.114 is the DNS commonly used by China Mobile, China Telecom and China Unicom. Both mobile phones and computers can be used.

8.8.8.8 is the DNS provided by GOOGLE. The address is universal in the world. Relatively speaking, it is more suitable for foreign countries and users visiting foreign websites.

Regional resolution Library: it is composed of many resource records (RR);

TXT: a way to identify and describe the domain name. Generally, this item will be used when making verification records, such as SPF (anti spam) records, https verification, etc;