Do you really understand Promise

Promise plays an important role in asynchronous programming, which is more reasonable and powerful than traditional solutions (callback functions and events). Some small partners may have such questions: Why are you still talking about promise in 2020? In fact, some friends seem to know all about this "old friend" they deal with almost every day, but a little in-depth may be full of questions. This article takes you to deeply understand this familiar stranger promise 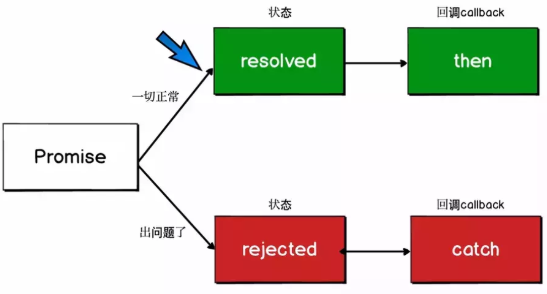 In the case of new Promise, execute the executor function first and print out 1 and 2. When Promise executes resolve, trigger the micro task or continue to execute the synchronization task,
When p1.then is executed, two functions are stored (at this time, the two functions have not been executed), and then 3 is printed. At this time, the synchronization task is completed, and finally the micro task just executed, so as to execute the successful method in. Then.

The error of Promise object is "bubbling" and will be passed back until it is processed by onReject function or caught by catch statement. With this "bubbling" feature, you don't need to catch exceptions separately in each Promise object.

To encounter a then, execute the successful or failed method, but if this method is not defined in the current then, it will be postponed to the next corresponding function

This code has three Promise objects: p0 ~ P2. No matter which object throws an exception, you can catch the exception through the last object p2.catch. In this way, you can combine the errors of all Promise objects into one function for processing, which solves the problem that each task needs to handle exceptions separately.

In this way, we eliminate nested calls and frequent error handling, which makes our code more elegant and more in line with people's linear thinking.

We all know that multiple promises can be connected together to represent a series of different steps. The key to this approach lies in the following two Promise inherent behavior characteristics:

First, explain what this paragraph means through the following example, and then introduce the execution process of down chain call in detail

By returning Promise.reject(1), we completed the first promise p2 created and returned by calling then. The then call of p2 will accept the completion value from the return Promise.reject(1) statement at run time. Of course, p2.then creates another new promise, which can be stored with the variable p3.

p2 executes the state of the new instance returned by then and determines which method in the next then will be executed. There are the following situations:

From the above examples, we can see that although Promise can well solve the problem of callback hell, this method is full of Promise's then() method. If the processing process is complex, the whole code will be full of then, the semantics is unclear, and the code can not well represent the execution process.

The implementation of async/await, a new asynchronous programming method in ES7, is based on Promise. In short, async function returns Promise object, which is the syntax sugar of generator. Many people think async/await is the ultimate solution for asynchronous operation:

Looking at the following code, can you tell what the printed content is?

Before doing this question, the reader needs to understand:

Next, we analyze step by step:

The parameters of Promise.resolve method are divided into four cases.

(1) Parameter is a Promise instance

If the parameter is a Promise instance, Promise.resolve will return the instance intact without any modification.

In the above code, p1 is a Promise and becomes rejected after 3 seconds. The state of p2 changes after 1 second, and the resolve method returns p1. Since p2 returns another Promise, p2's own state is invalid. The state of p2 is determined by the state of p1. Therefore, the following then statements become for the latter (p1). After another 2 seconds, p1 becomes rejected, causing the callback function specified by the catch method to be triggered.

(4) Parameter is a thenable object

The Promise.reject() method returns a Promise object with a rejection reason.

It is worth noting that after you call resolve or reject, Promise's mission is completed. Subsequent operations should be placed in the then method, not directly after resolve or reject. Therefore, it is best to add a return statement in front of them so that there will be no accidents.

Promise.all generates and returns a new promise object, so it can use all the methods of the promise instance. When all promise objects in the promise array are changed to resolve, the method will return, and the newly created promise will use the values of these promises.

If any Promise in the parameter is reject, the whole Promise.all call will terminate immediately and return a new Promise object of reject.

Sometimes, we don't care about the results of asynchronous operations, only whether these operations have ended. At this time, it is useful for ES2020 to introduce Promise.allSettled() method. Without this method, it is troublesome to ensure that all operations are completed. The Promise.all() method cannot do this.

If there is such a scenario: a page has three areas corresponding to three independent interface data, and Promise.all is used to request three interfaces concurrently. If any of the interfaces is abnormal and the status is reject, it will lead to the failure of all the data in the three areas on the page. Obviously, this situation is unacceptable, Promise.allSettled can solve this pain point:

Promise.allSettled is similar to Promise.all. Its parameters accept an array of promises and return a new promise. The only difference is that it will not be short circuited. That is, after all promises are processed, we can get the status of each promise, regardless of whether the processing is successful or not.

The above code creates three promise objects. These promise objects will change to the determined state after 1ms, 32ms and 64ms respectively, that is, FulFilled. After the first 1ms, the callback function registered by. then will be called.

ES9 adds a finally() method to return a promise. At the end of the promise, the specified callback function will be executed regardless of whether the result is fully or rejected. This provides a way for code to be executed after promise is successfully completed. This avoids the situation where the same statement needs to be written once in then() and once in catch().

The complexity of this problem lies in the need for "alternating and repeated" lights, rather than a one hammer deal that ends after one light. We can achieve it by passing it back:

You can also implement async/await:

async/await can be used to write asynchronous code in the style of synchronous code. There is no doubt that the async/await scheme is more intuitive, but an in-depth understanding of Promise is the basis for mastering async/await.! Recommend an easy-to-use BUG monitoring tool Fundebug , welcome to try for free!

Welcome to the official account: front-end craftsman, your growth, witness with us!