#Draw a picture with Stata # 01 function and drawing type

As the saying goes, a picture is worth a thousand words. Drawing is one of the most basic and important data analysis skills, so that people give the whole behavior process of drawing a more professional name - Data Visualization. As a powerful and flexible data analysis tool, Stata can realize a variety of drawings. This topic [Stata drawing] aims to promote a broad and in-depth understanding of Stata's drawing function. To this end, a series of articles will be launched one after another, striving to show the structure and details of the drawing.

This article is the first lecture in the # drawing a picture with Stata # series. It is a general introduction to the drawing function and drawing type of Stata.

Note: the above commands are the official commands of Stata, and many practical drawing commands are written by users. These commands will be introduced in detail in the subsequent articles of this series.

Drawing type. It can be seen from the drawing commands in the above table that Stata drawing is nothing more than to realize several common types of drawing. For drawing commands, we can further divide them into descriptive graph and inferential graph according to the differences of drawing objects. The former focuses on intuitively reflecting the distribution and correlation mode of the data itself, while the latter displays the results of statistical analysis through graphics. The key difference between the two types is whether the source of data used for mapping is based on statistical models. This paper introduces the former, that is, descriptive statistical drawing, which focuses on the visualization of the cleaned data or analysis results. It is one of the important links in the process of empirical analysis, reflecting the author's skills, taste and thinking. The drawing based on inference statistics will be introduced in detail in combination with specific research methods. The following figure shows the contents contained in the "graphics" of the toolbar in the Stata interface (Figure 1).

Drawing type based on descriptive statistics

Draw with commands. To draw a graph in Stata, you can click the "graph" button in the above figure, which is very convenient. However, with the increasing demand for skilled techniques and customized drawing, drawing with commands is not only more efficient, but also can continuously strengthen the practical operation ability. It should be noted that since the drawing command is very "huge", it is necessary to continuously accumulate the graphic code in the data of all parties in the study and application; At the same time, make good use of Graph Editor in drawing

Optimize the local details of the drawing. After all, we can't remember the options of all drawing commands. 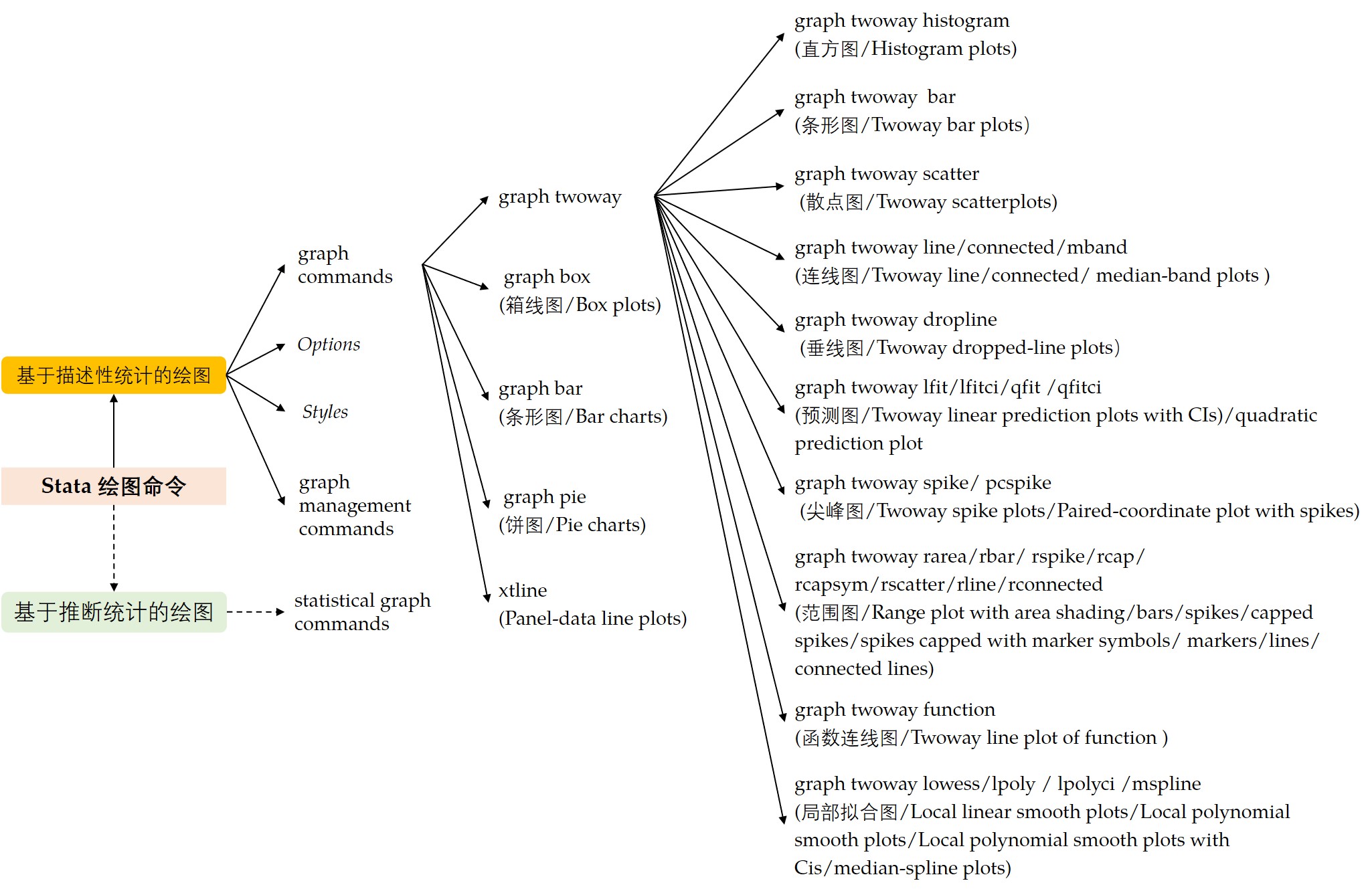 The drawing code of Stata mainly includes four parts: (1) Graph Commands; (2) Options; (3) Styles; (4) Graph Management Commands. The first three types of commands are the basic elements of drawing using existing data. Take the common graph twoway as an example. Twoway is a family of plots, all of which fit on numerical y and x scales. The syntax structure is as follows:

Where, "plot" represents a specific type of graphics. The following figure shows all members of the twoway family (Figure 3), and Figure 2 shows only some common graphics types. "[]" indicates parts of the code that can be omitted. Although it can be omitted, this part is the core of mastering drawing commands. Choosing the appropriate plot type can only ensure the "right" drawing, but can not guarantee the "good" drawing. Therefore, the focus of our study of Stata drawing falls on the rendering effect of graphics. 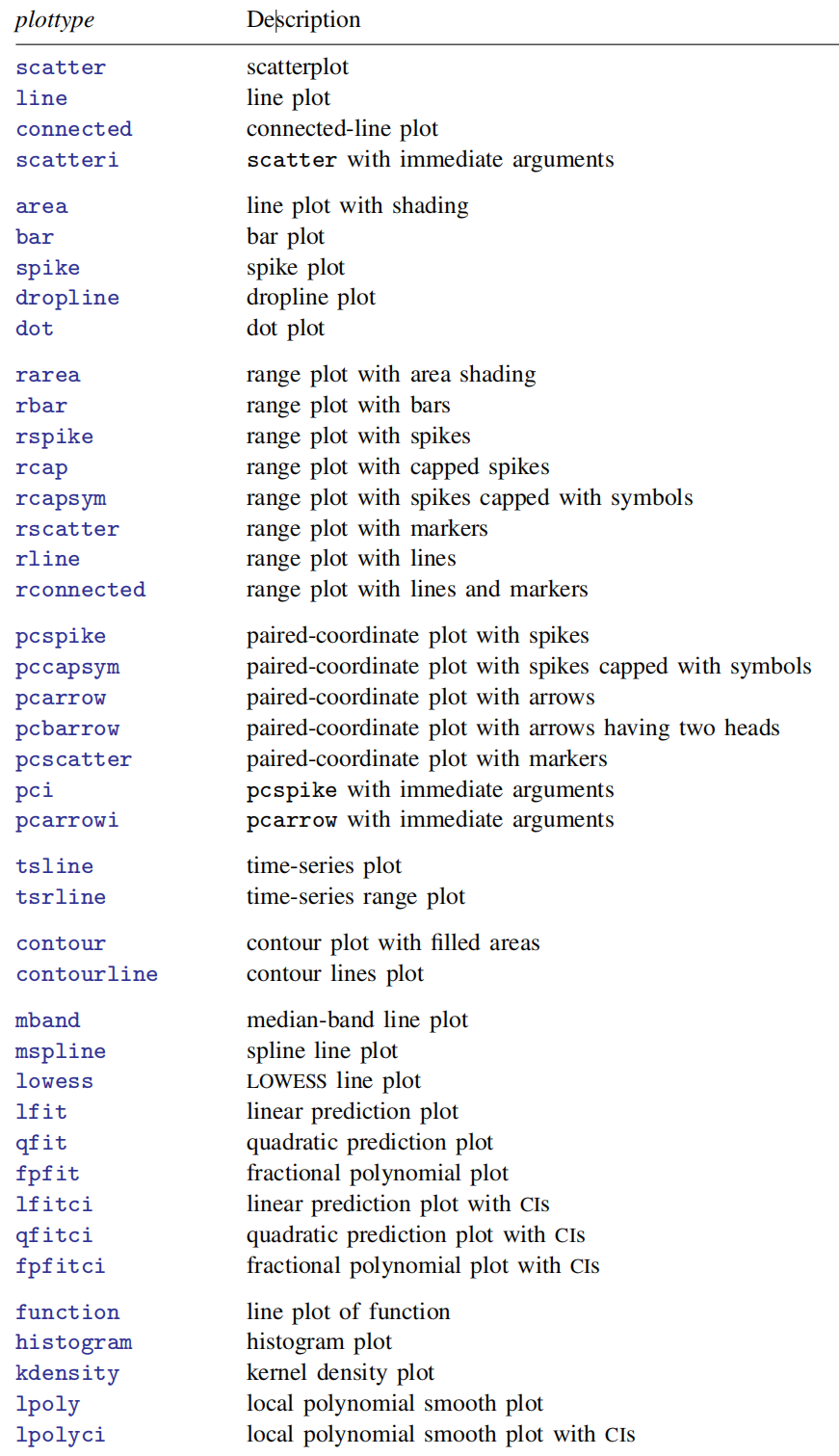 Figure 4 shows the specific contents of twoway options. With these options, we can improve and optimize the rendering effect of graphics drawn based on twoway, for example, adding specific values for the x or y axis (added_line_options). The use of these options is also very regular. They appear after the drawing command, and can be used together with various options we need. There is no difference between them. 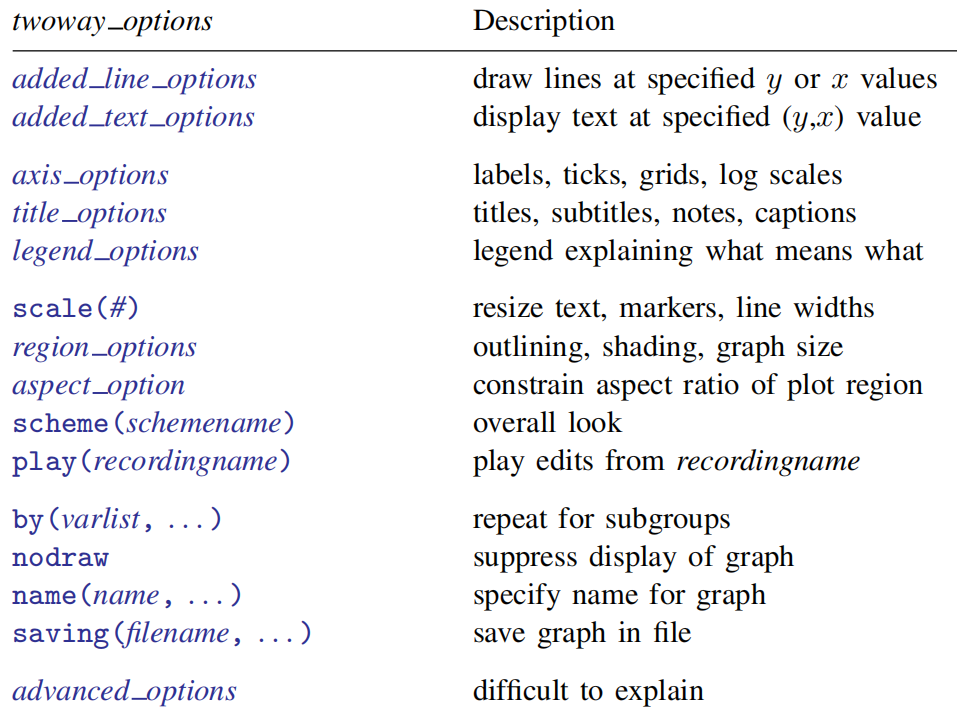 The above takes the graph twoway command as an example to illustrate the drawing logic of Stata. However, as shown in Figure 2, there are many kinds of graphics that can be drawn, but their syntax structure is the same. Master the structure of drawing syntax. Once we have data, we can carry out data visualization quickly and gracefully. Next, we show Stata drawing with a set of confusing examples to help us understand Stata's functions and drawing types.

The graph bar allows you to draw vertical or horizontal bar / column charts.

This paper attempts to give a drawing example of bar chart under the combination of bar direction and "over()" option. Next, we use a US City temperature data with 956 observation points to show the drawing idea of the bar chart and the usage of various options. 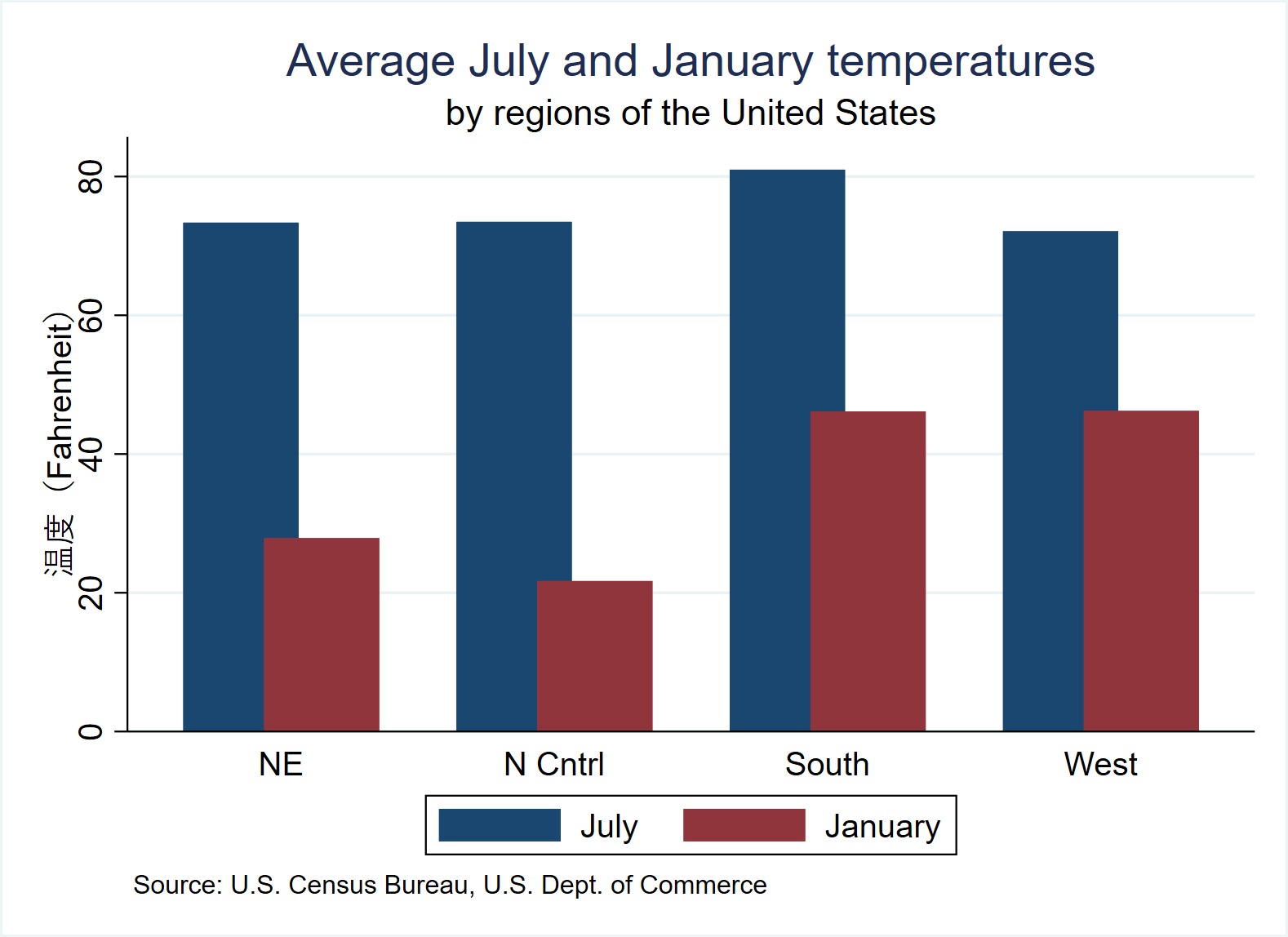 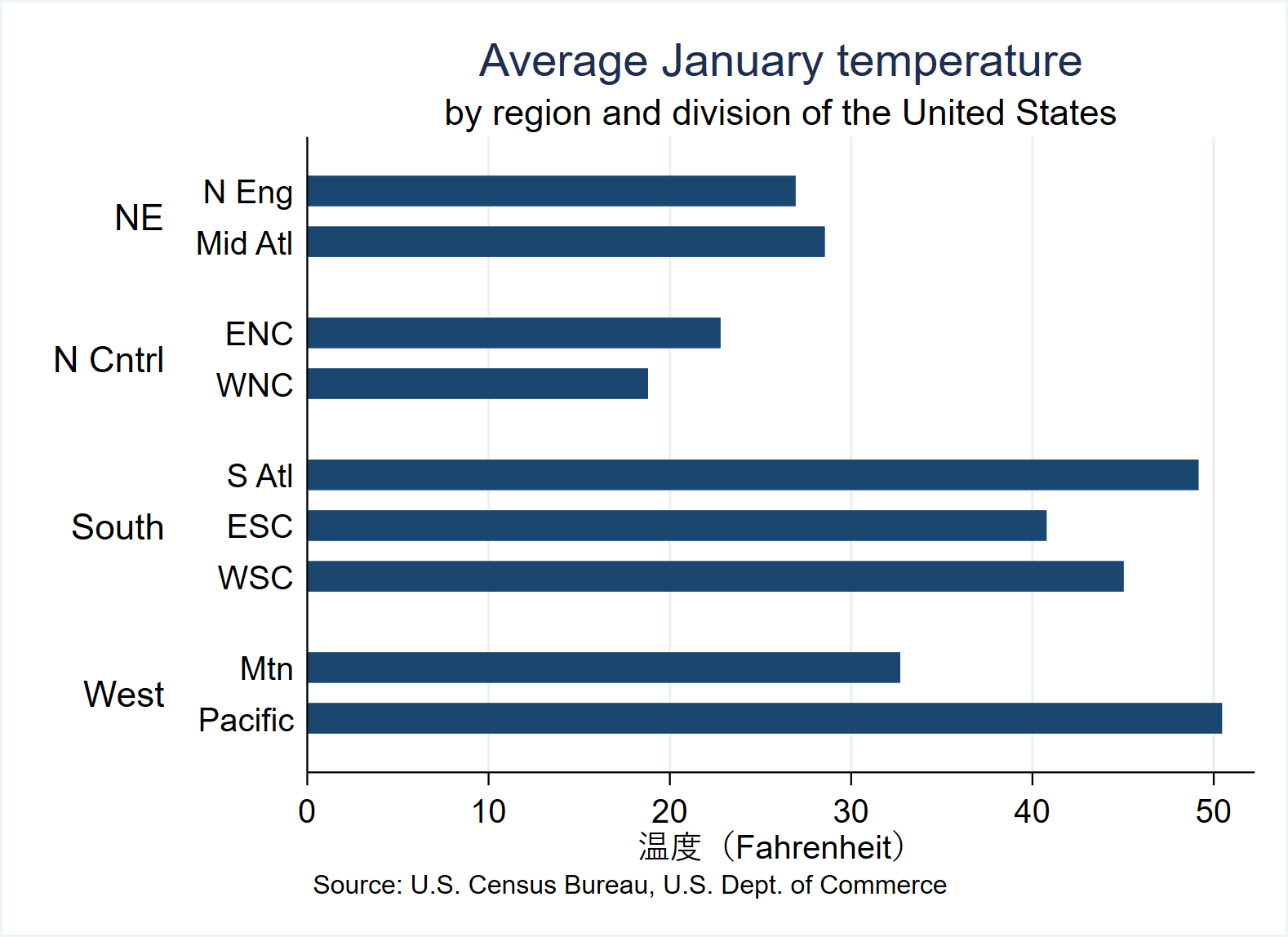 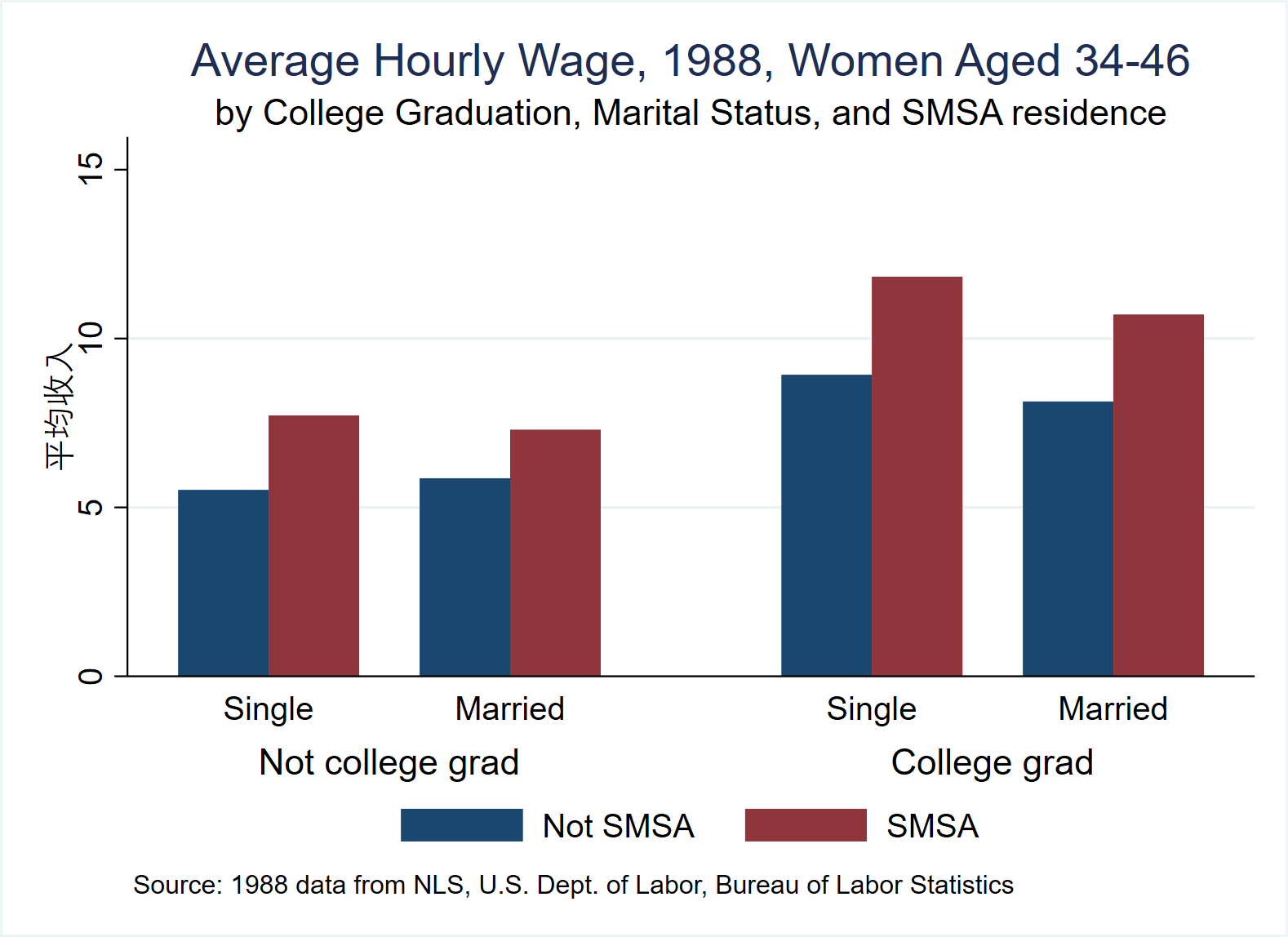 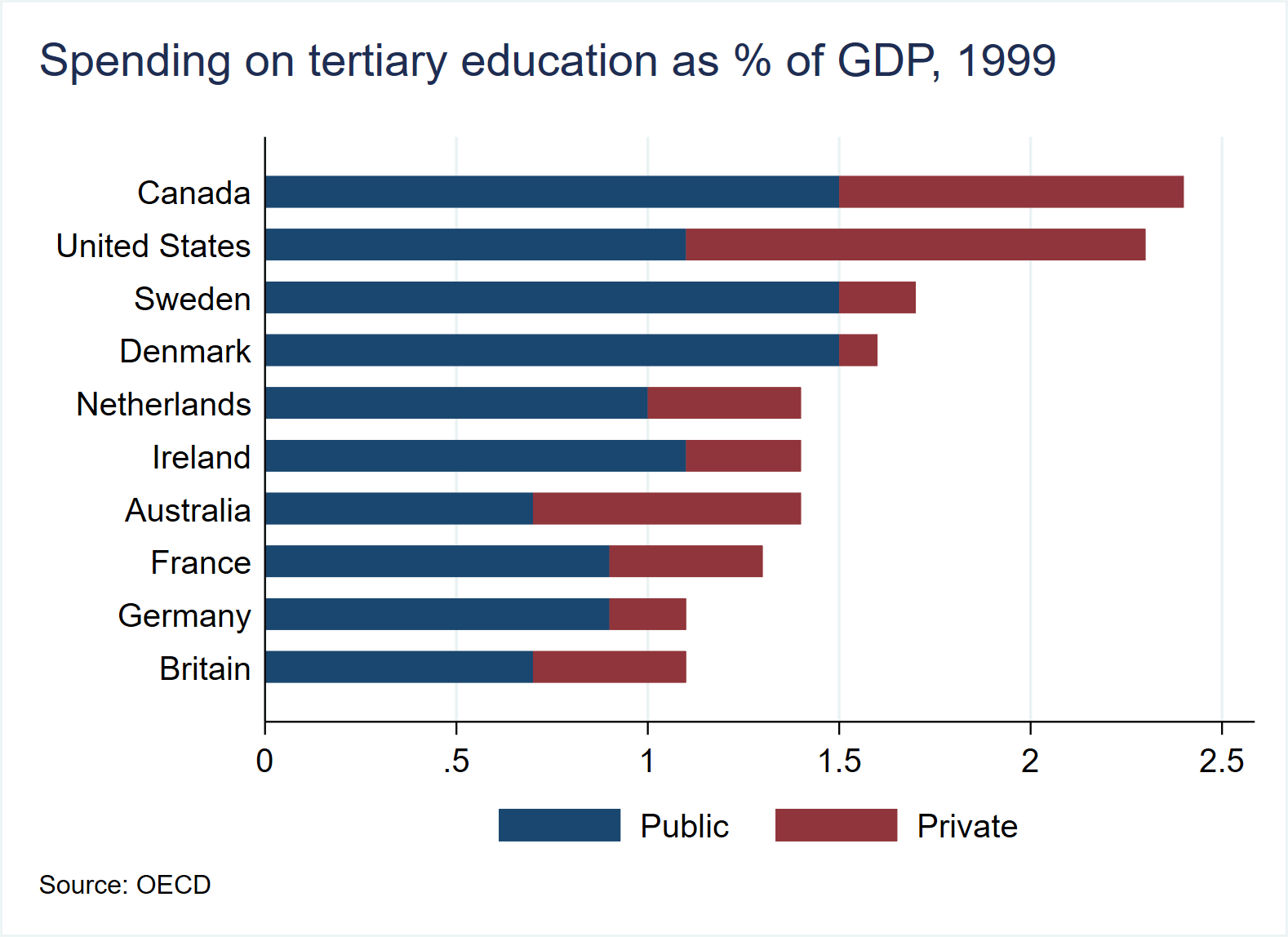 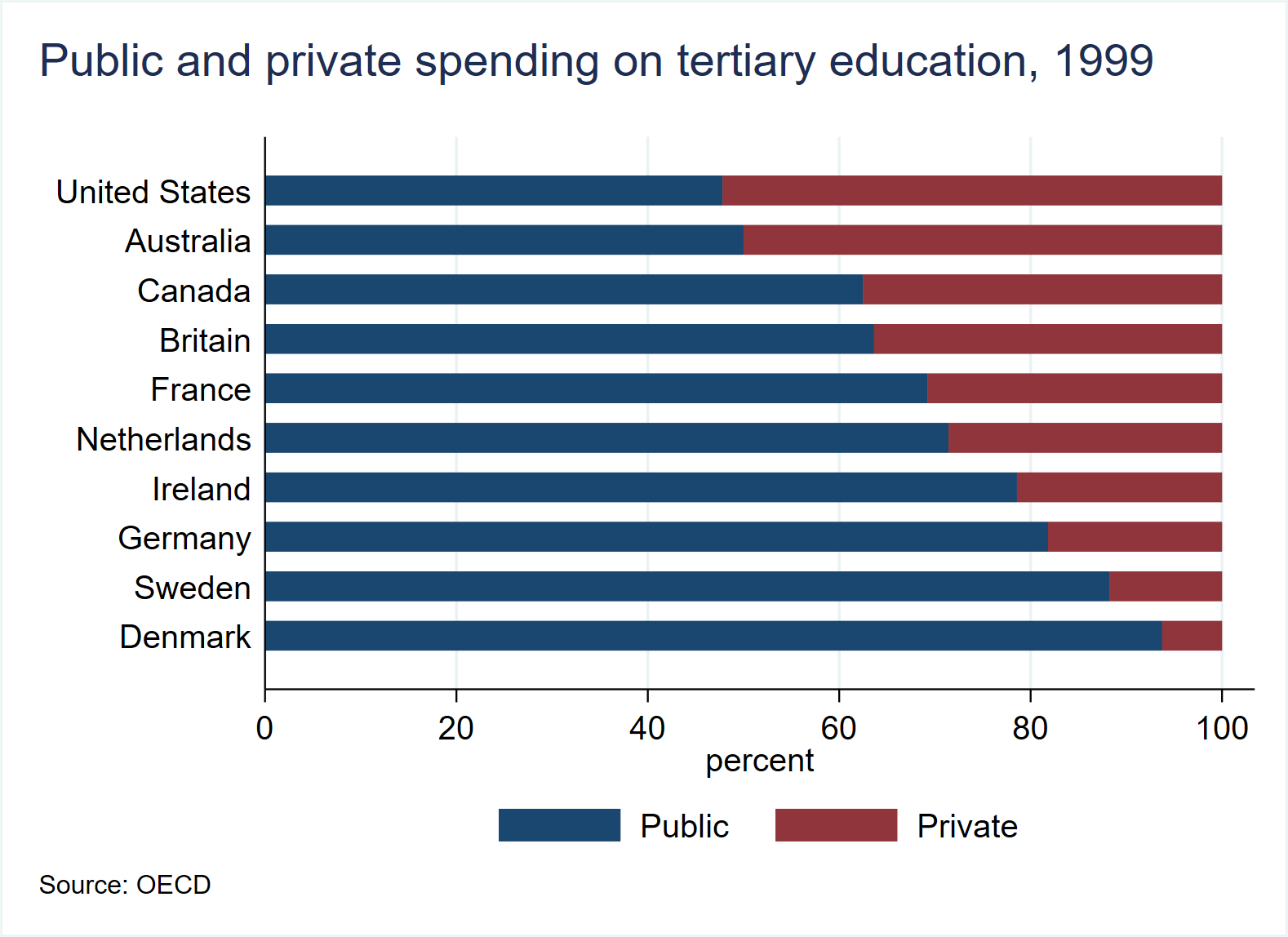 The (x, y) of twoway bar in the graph is numeric. 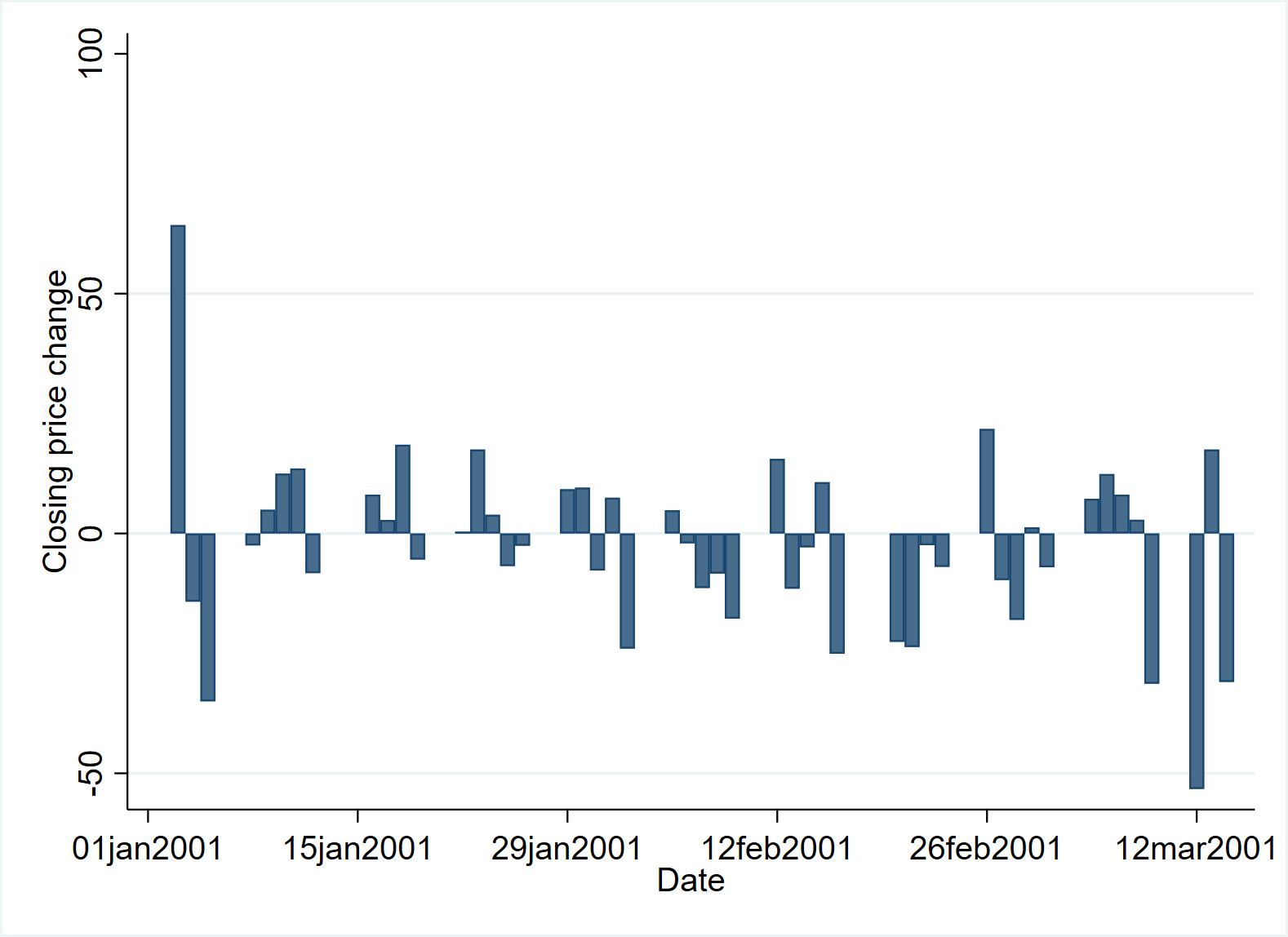 Its advantage is that it can be used in combination with other drawing types of twoway family. 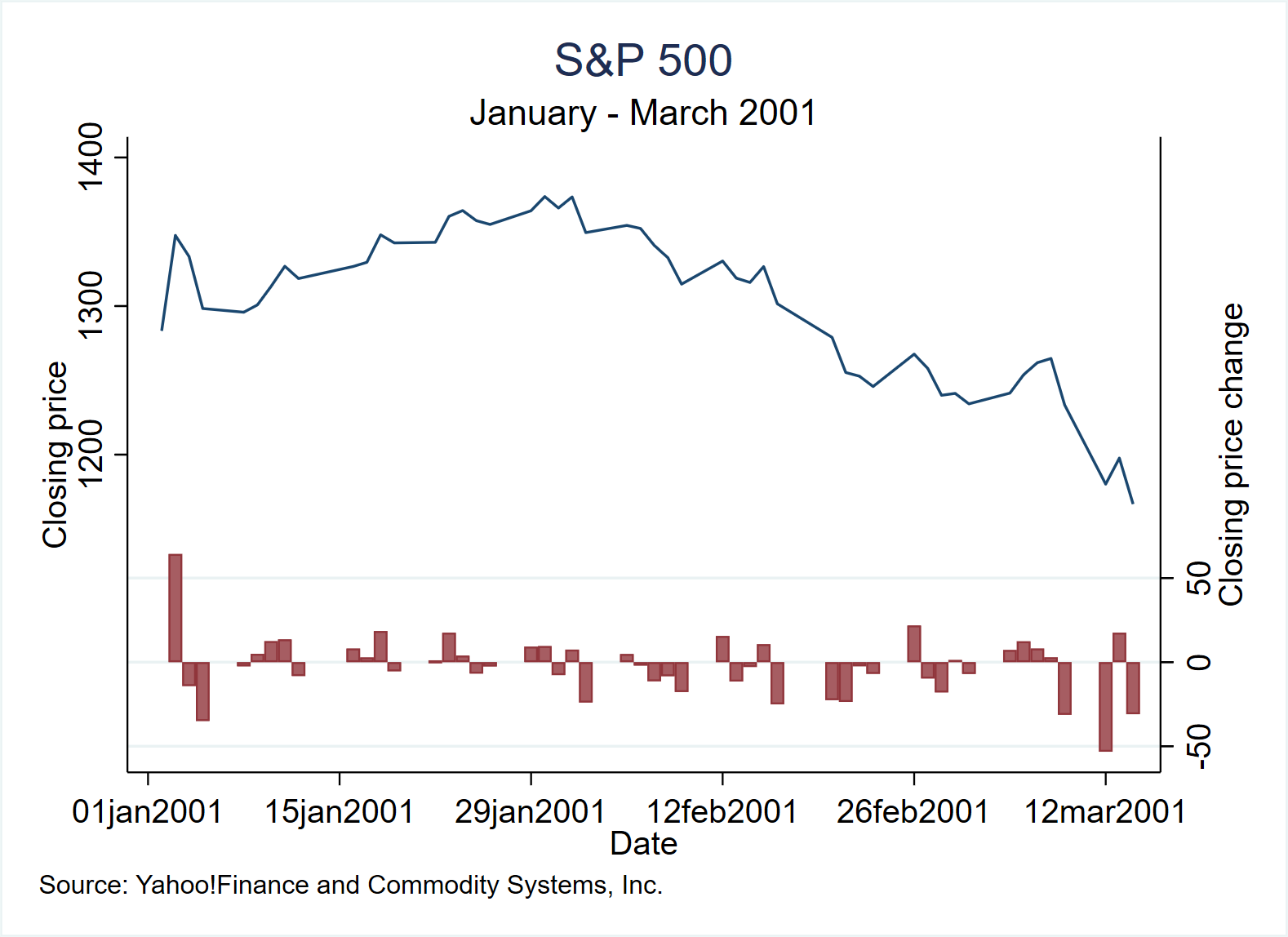 Draw the histogram of variable (varname). Unless the discrete option is specified, it is generally assumed that varname is a continuous variable. According to Beniger and Robyn (1978), although A. M. Guerry used histograms in his publication in 1833, the term "histogram" was first used by Karl Pearson in 1895. 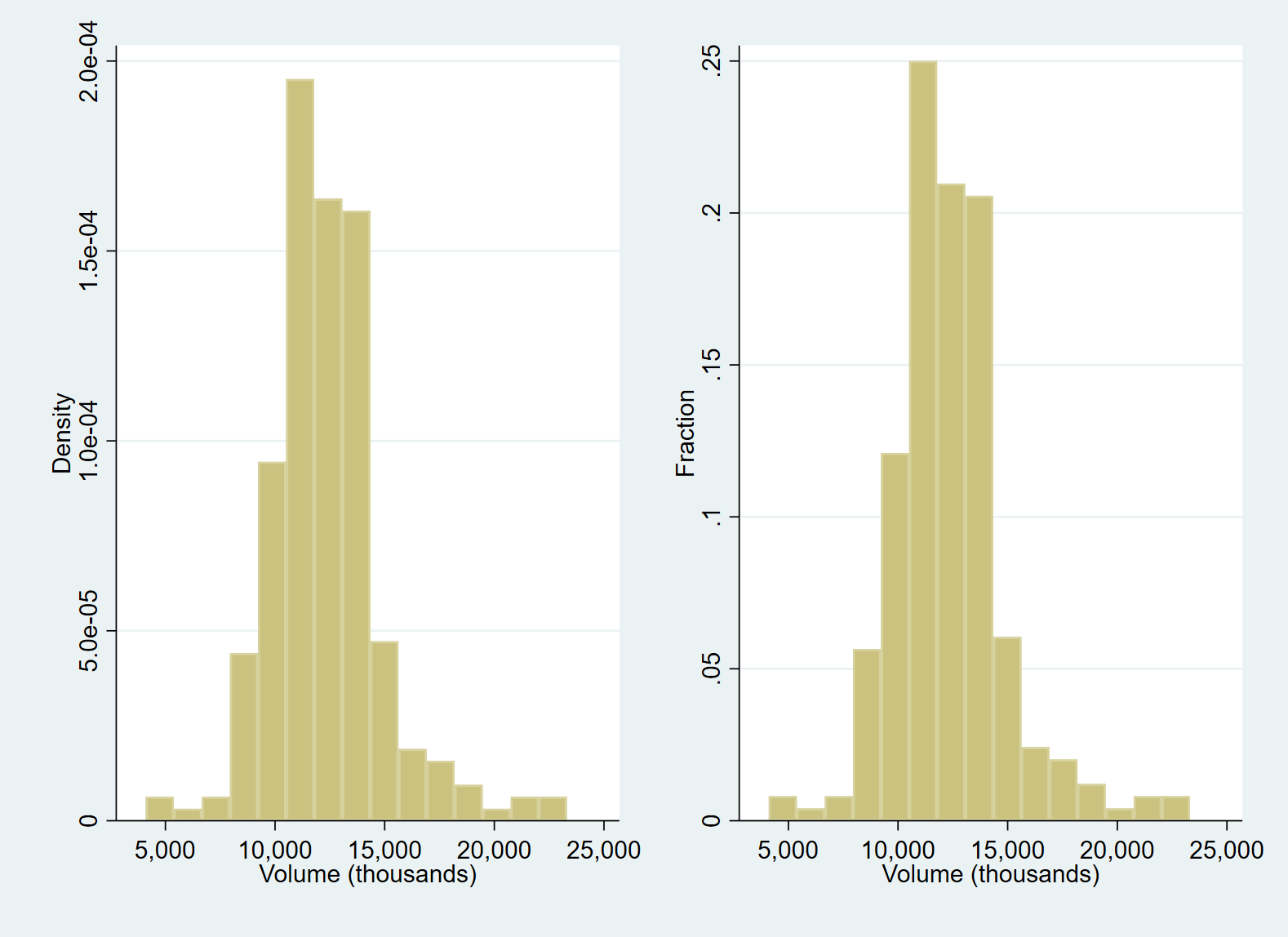 The histogram is called bin, and its number (k) is determined according to a mathematical rule:

Where N is the number of variables that can be observed. How to make better use of the statistical characteristics of continuous variables? Based on the above benchmark graph, we can use the following command to include the standard deviation information into the graph at the same time. It is also a more recommended histogram drawing method, which can be used in papers and research reports. 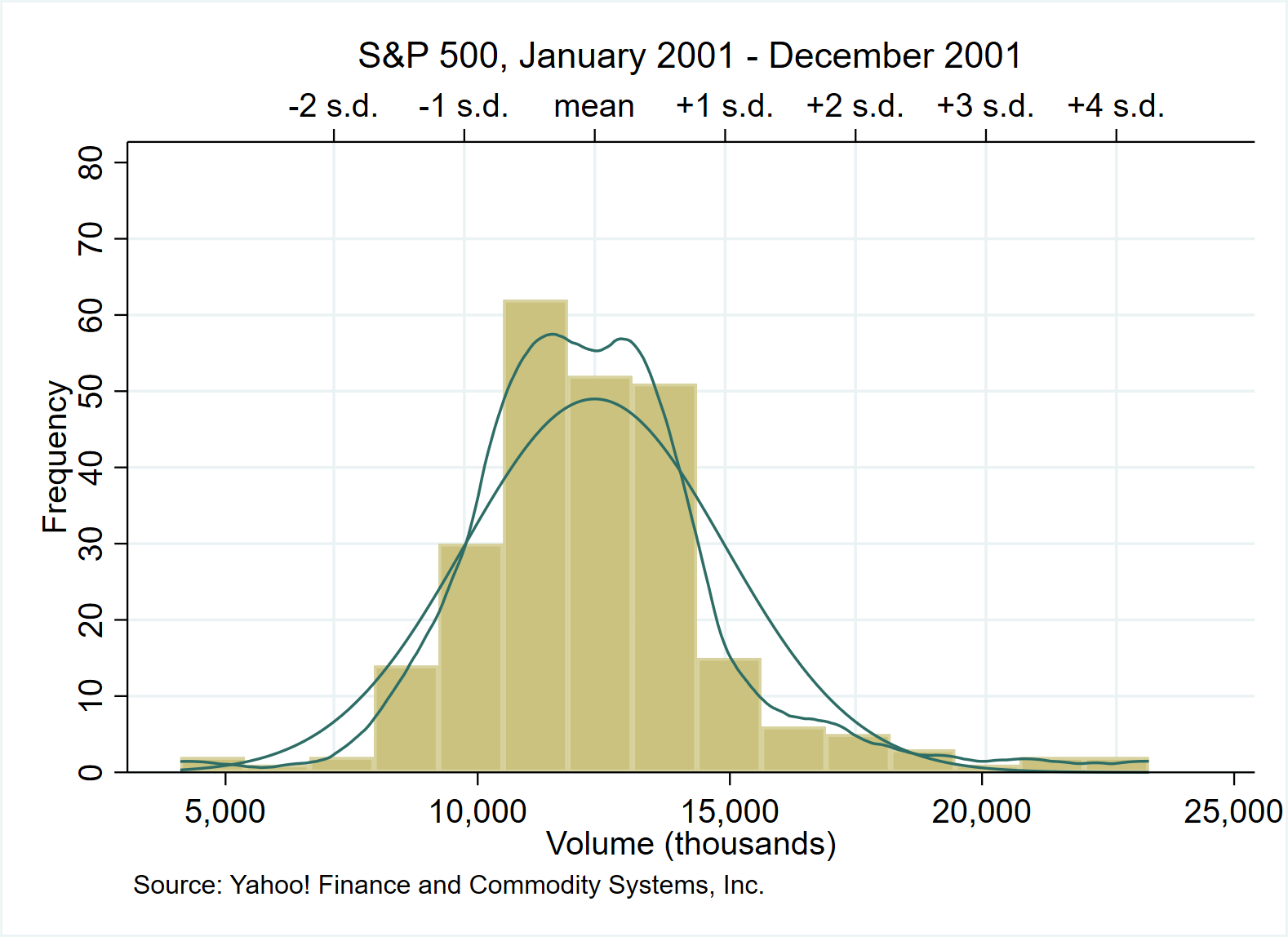 Use the discrete option to treat variables as discrete rather than continuous, even though the variables themselves may be continuous. At this time, each unique value of the variable will have a bin, so the number of columns is also large. The height of each column represents the density, frequency, percentage or proportion corresponding to the value. 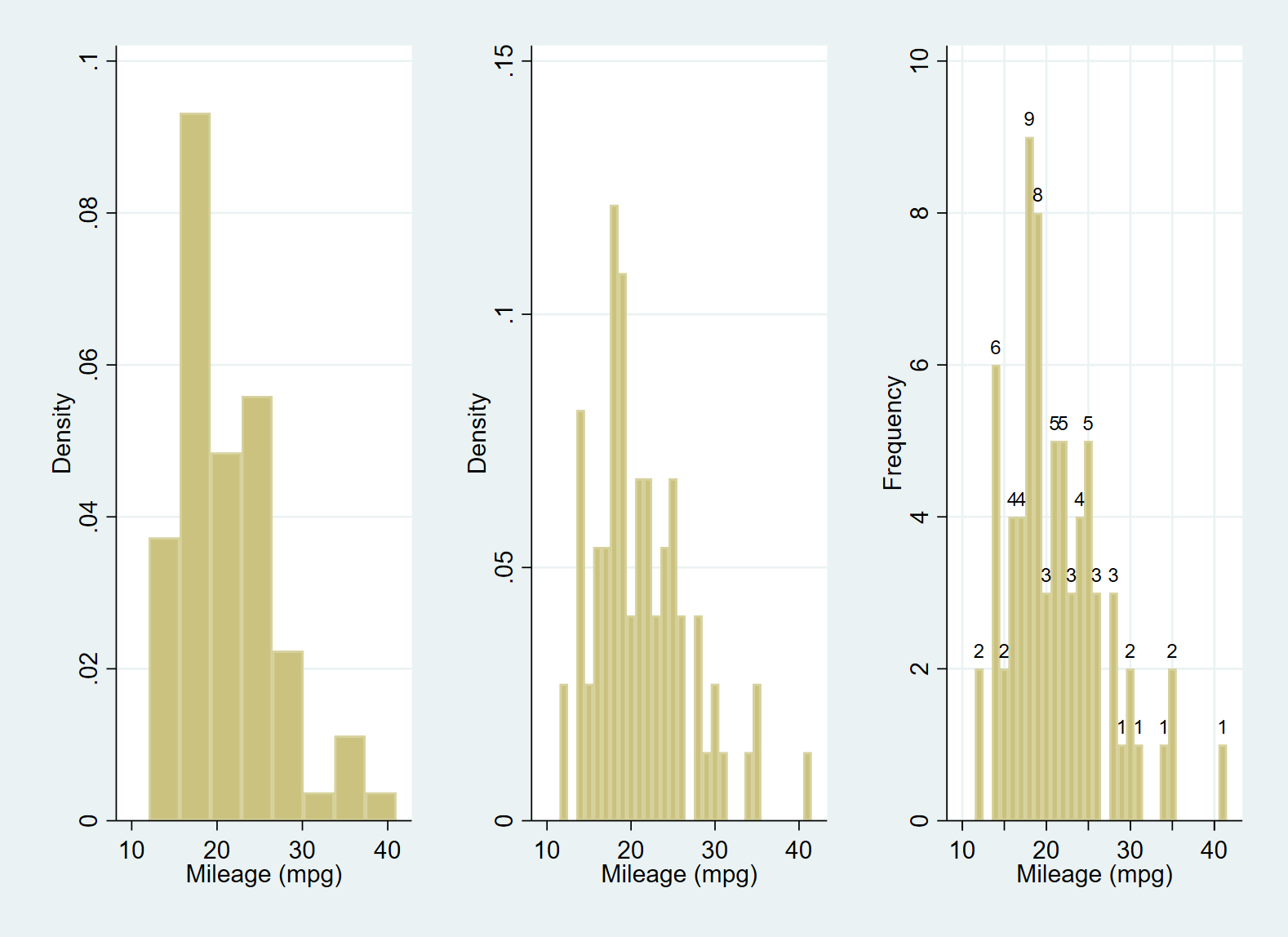 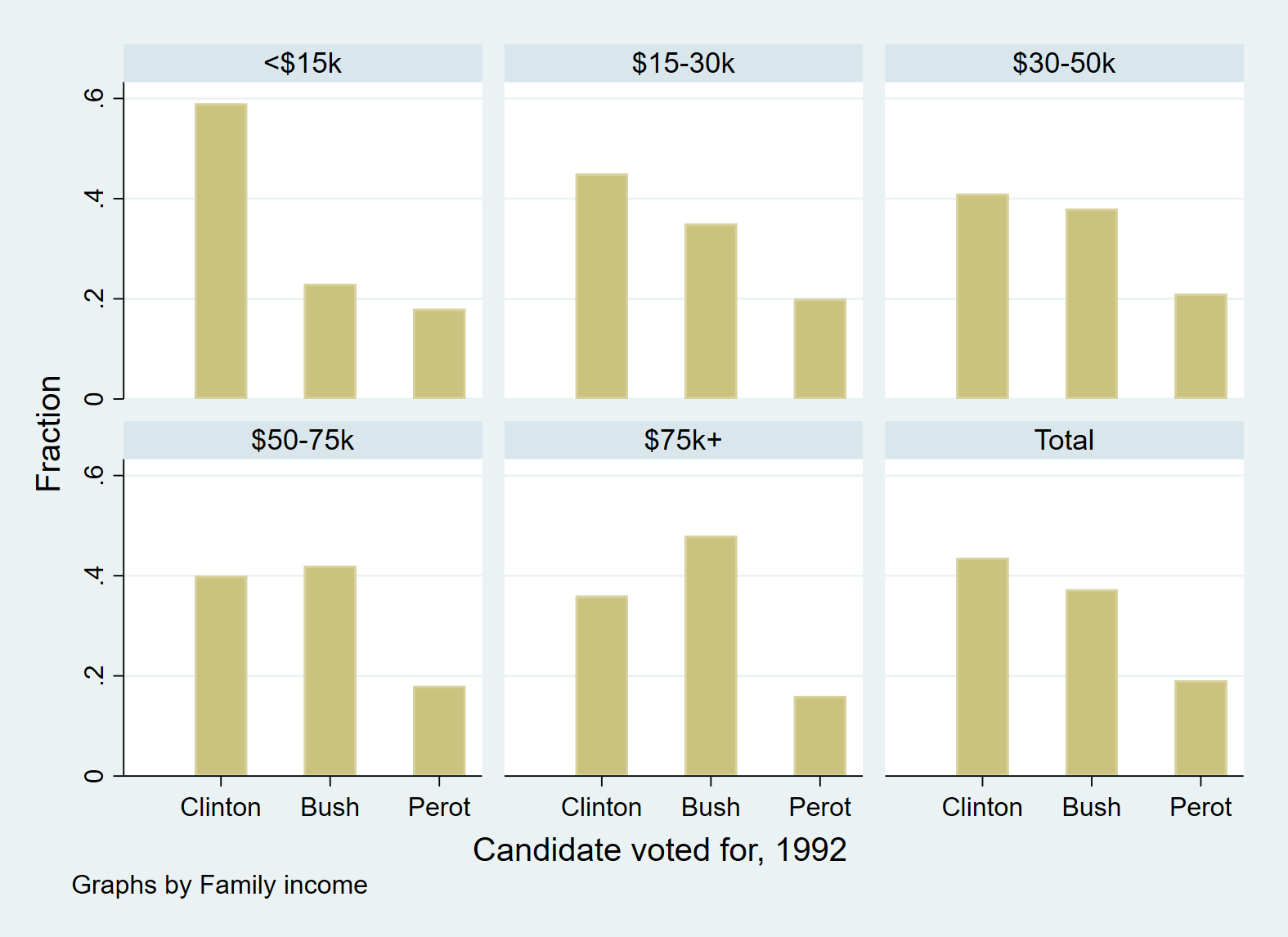 It is worth noting that we can also implement the above example with bar chart, but the object of drawing has changed.

Through this set of examples, we can better understand the three commands. 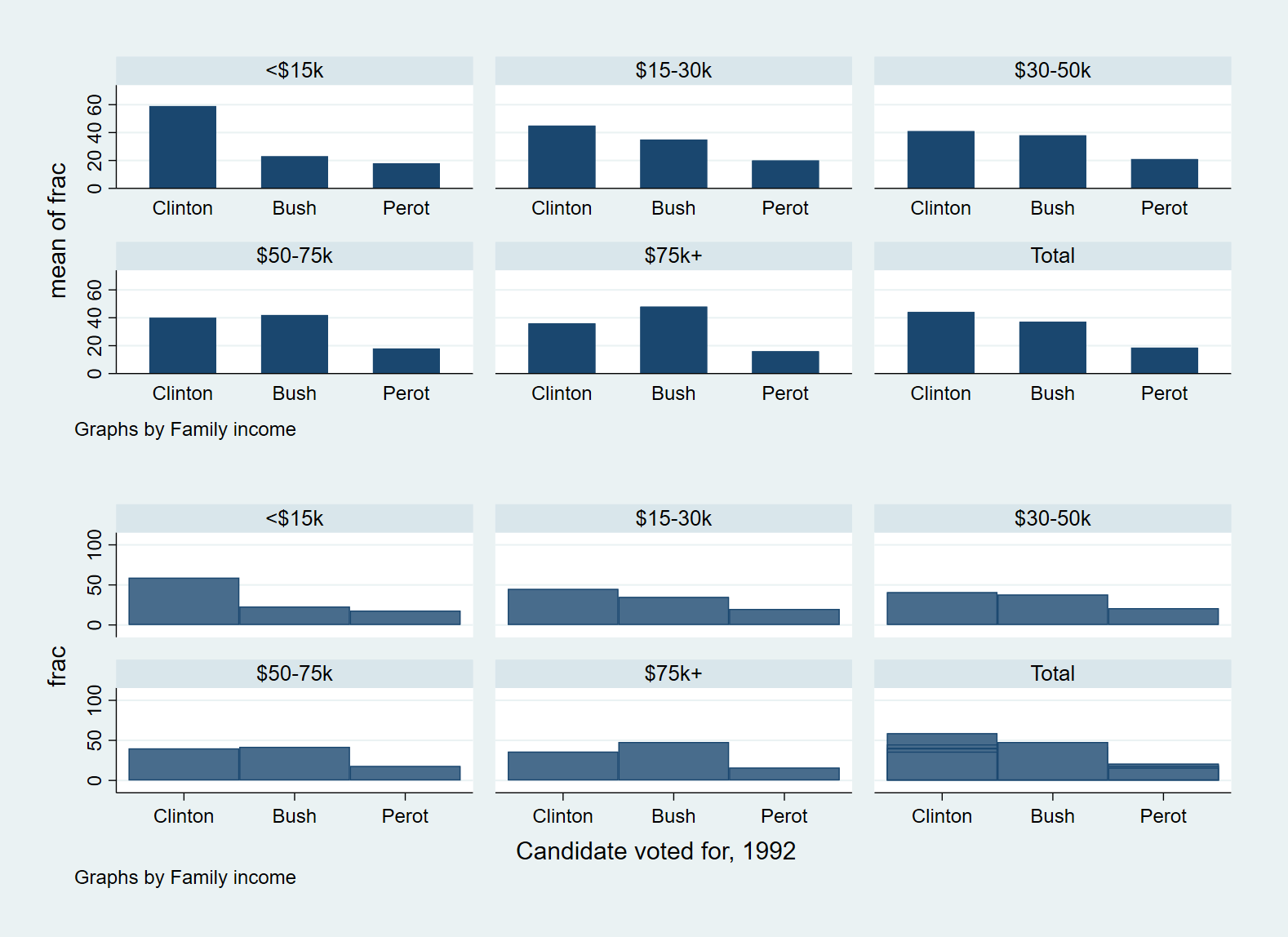 There is almost no difference between twoway histogram and the histogram presented above, and the latter can superimpose the normal density function or kernel density estimation on the histogram, which also makes the advantage of the latter. Therefore, in practical application, histogram is recommended.

The above is the content of this paper. The essence of drawing lies in: (1) making clear what kind of graphics to draw with the available data (you can inspire yourself through visual images or referring to other people's works); (2) Select the appropriate drawing command (such as using graph bar or twoway graph bar); (3) Through various drawing options, the drawn graphics are more beautiful and self explanatory. Subsequent articles will break down the main graphic types one by one, and let the data speak with pictures!